There was more rain overnight, and the forecast was for high winds all day, but with the rain sinking further south during the day. The north coast looked the best bet, so we headed along the A55 with our prime target of Tal y Fan, with Great Orme as second choice if Tal y Fan didn’t look playable. We foolishly took the minor road uphill from Rowan: steep, narrow with few passing places and two gates, but finally it emerged onto another single track road which was a little wider and had passing places, though it too became rather rough before ending at the parking area at the end of the road. We had the parking area to ourselves, but it was blowing a gale with some hint of dampness in the air.

We set off west along the track, running parallel to power lines and passing some standing stones. We crossed a wall, and left the track to head up steeply, and before long had got above the line of lying snow. The ground was rough and heathery with cold pools of water between the patches of snow which combined with the relentless wind made going hard as we headed over Foel Lwyd, down the other side and up onto Tal y Fan itself. We had good views to the coast and Great Orme, with blue sky sun visible just out to sea, but a persistent bank of cloud hovered over us. We had hoped the wind would blow the cloud south but it stayed in place for all of our time at the summit, eventually moving south far enough that the Great Orme was bathed in sunshine, but sadly not us. 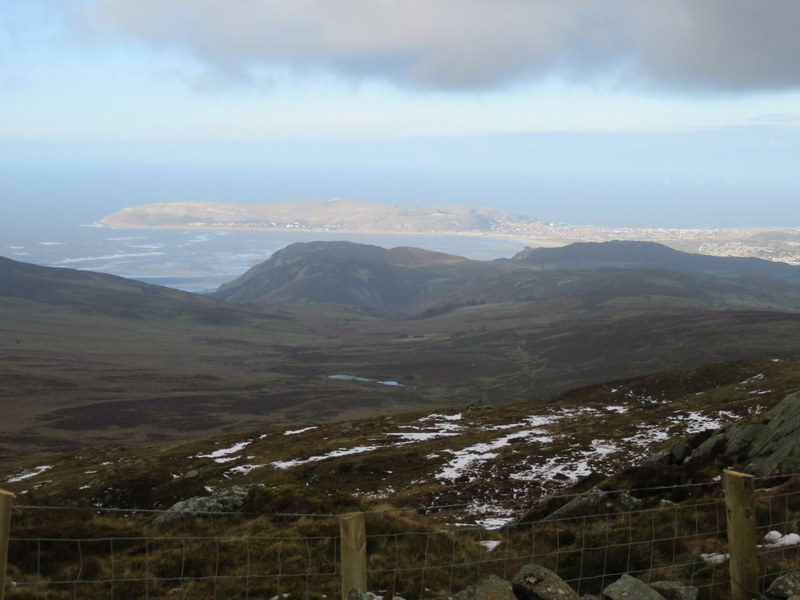 As we crossed the stile to reach the trig point, it was noticeable how much the wind dropped. There were quite a few people on the hill, so we set up a little bit down from the trig point on the south east side, which also offered more respite from the still strong wind. Caroline tried to get the MFD for VHF high enough to get out in all directions, with all sections in use, but the wind had other ideas and snapped the connector on the lowest section. A tape repair and with one half metre section less the MFD was back in action, enabling Caroline to qualify the hill on 2m. Meanwhile Martyn had a good run of 19 contacts on 5MHz, after which Caroline took over HF with 25 contacts on 7MHz. Martyn the returned to HF with 9 contacts on 14MHz while Caroline rustled up another 6 contacts on 2m FM. 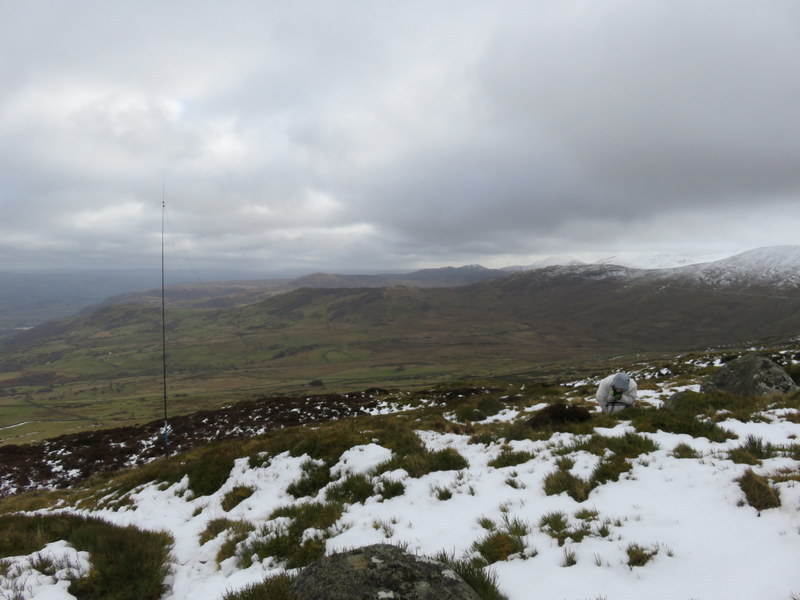 As we headed back over the summit stile we were rapidly reminded that it was still very windy. We decided to carry on to make it a circular walk, following the wall heading ENE, and when the wall headed left maintain the same line towards the Caer Bach fort. We picked up a public footpath heading south west, and finally had relief from the worst of the wind. The path led us back to the road, which we followed back to the car – still windy but not as bad as the walk along the ridge.