With the end of winter bonus season only a couple weeks away, Allison and I decided to end the season with something notable. The next summit we hiked would also be my 10th activation, so it seemed fitting to pick something a little epic. We settled on a plan to do Lookout Mountain (W9/WI-003) on Saturday, and then Timms Hill (001) and Rib Mountain (004) on Sunday.

Previous notes for Lookout Mountain describe two routes: a drive up risking the wrath of an overprotective land owner, and a 3mi round-trip hike on the Ice Age Trail. I did a little research and found that if you came from the other directions on the IAT, you had the option of making the round-trip either 8 or 16 miles. We felt like an all day hike, so we planned to do the 16.

The IAT was under the same three feet of snow, however. Someone had recently snowshoed out in the direction we were heading and the snow was frozen enough that we could walk in the tracks just wearing microspikes. How far they’d gone, we didn’t know, of course, but we decided to try it. How would it be coming back when the sun softened the snow? We decided to worry about that later. To the top! 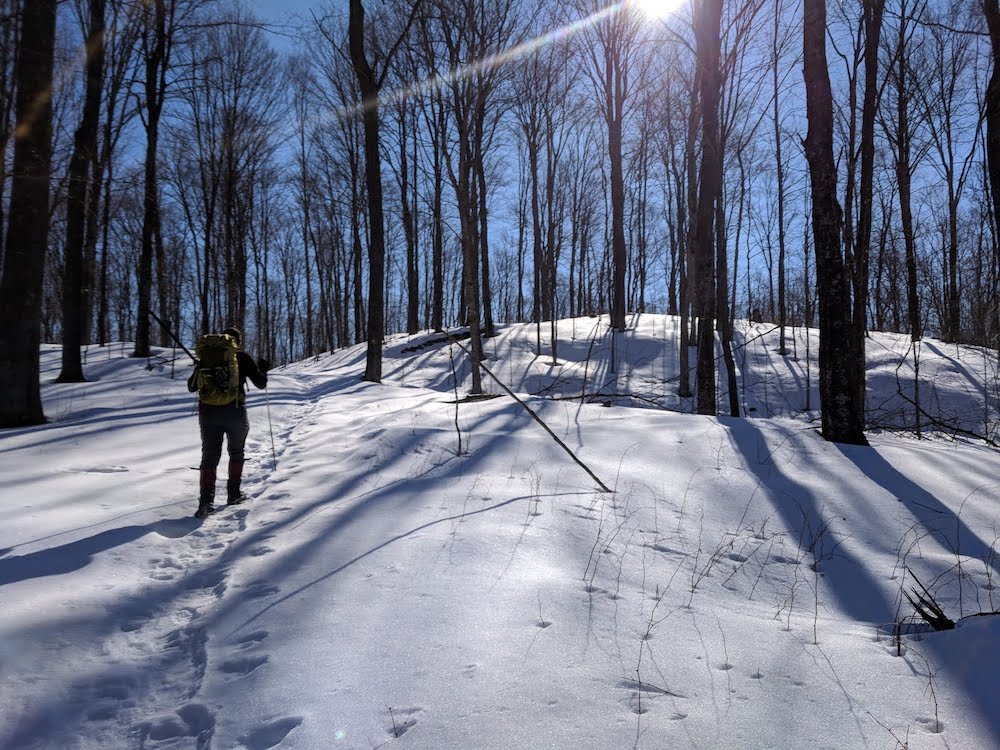 The hike out was exhilarating and beautiful. Walking on the snow crust worked most of the time, but there was a good bit of post holing. It was less a 4mi ascent and more like 3.5 miles of traversing to the base of the hill and then .5mi up it. Temps warmed into the upper 40s so we soon were ditching cold wx gear.

The summit of Lookout Mountain is misnamed and, sadly, has no view. We set up on the south side in the snowfield which had to be in the upper 60s with the reflected sun. I worked 40, 20, and 20ms over about an hour. Allison made a couple of pots of tea. Sitting on a snowy mountaintop in brilliant sun, casually working CW QSOs and drinking tea ranks very high on my list of good things to do, I found. 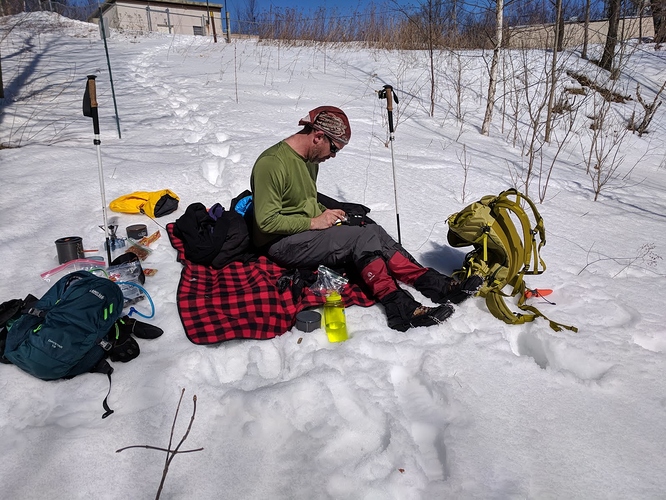 Of course, the way down was vastly harder as the snow crust had softened. After 1.5mi of struggling in thigh deep snow, I pulled out a map and found a way to hike out on (packed) snowmobile trails which only added a couple of miles. Totally worth it. I’ll post our GPS track to the maps site. The last mile was down the road we’d parked on. Walking down a sunny, quiet dirt road after having bagged a hill, pleasantly worn out, chatting with Allison is also very high on that good-things-to-do list.

We proceeded to find ourselves a fantastic northwoods eatery and drinkery for some much deserved libations (Bill Bob’s Sports Bar and Supper Club – honestly that’s its name. If you do Lookout Mtn, def check it out). Summit #10 was as memorable as intended. 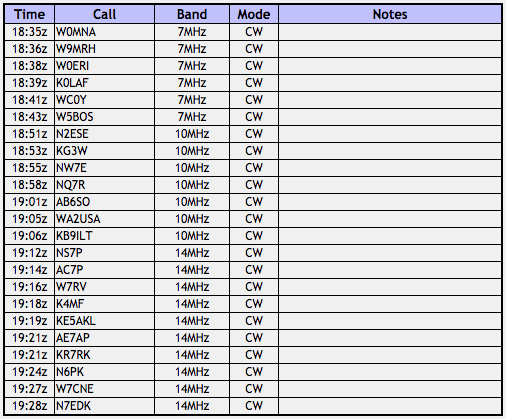 We spent the night in quaint Ogema, only 6 miles from Wisconsin’s 001 mountain. We stayed in a 7 room motel that was the sort of place you had to go across the street to the pub to check into. Perfect. We took our time at breakfast the next morning as the temps had plummeted again. The prediction was for another spring-like day, and it held true.

In the winter, Timms Hill isn’t a drive up. Instead, you park on the east side of the park at 45.453094,-90.186751. Then, it’s about .75mi of a walk to the top of the hill. Everything was frozen hard so we had no problems hiking up despite the deep snow. At the top there’s a snazzy observation tower that we had all to ourselves.

This was the first activation I’d done from an observation tower, so I decided to just hang my 60’ EFW over the edge at the top, essentially creating a top fed vertical. This resulted in a couple of things. First, my KX2 refused to tune the antenna to anything reasonable on 40. I am not sure if this had something to do with the ground (which wasn’t anywhere near the ground) or what. Sorry for those who might have been listening on 40m. 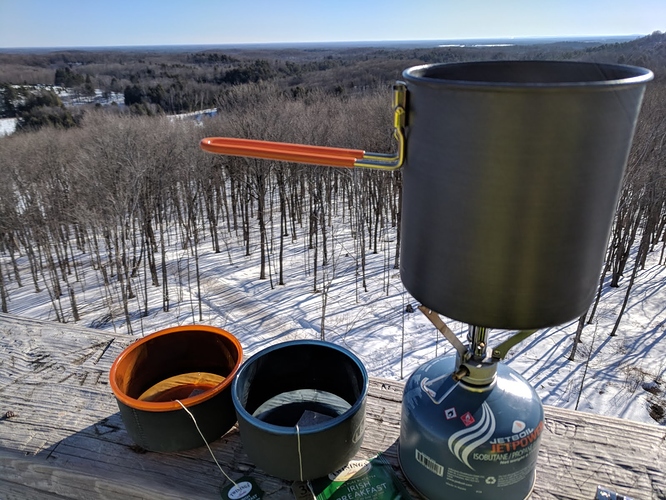 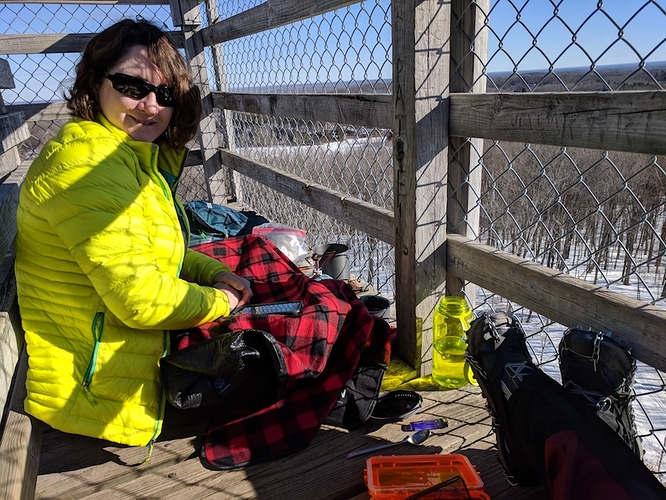 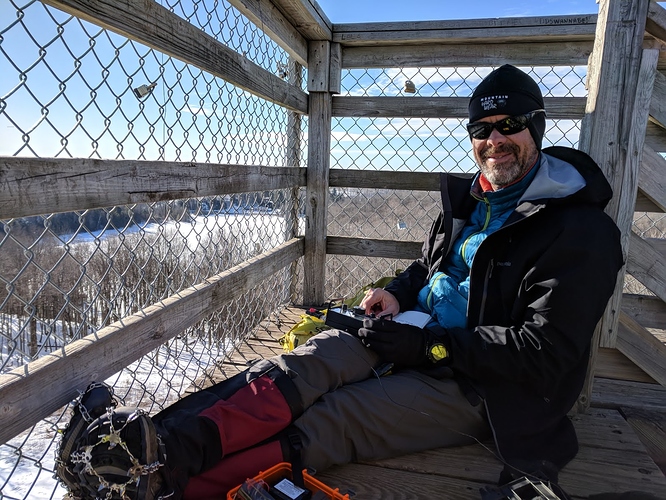 Second, like the last time I used a vert in the field I ended up with some serious DX. I was working a small pileup on 20m and it suddenly became a very large pileup. A very large confusing pileup as none of the callsigns made any sense suddenly. “Holy shite, I’m into Europe!” I think I actually said. I managed to work a station in the Czech Republic and another in Sweden and then suddenly they were all gone again. Thrilling stuff for sure.

I ended up with 15 QSOs despite not working 40m. Qs made, tea drunk, we headed back to the car. 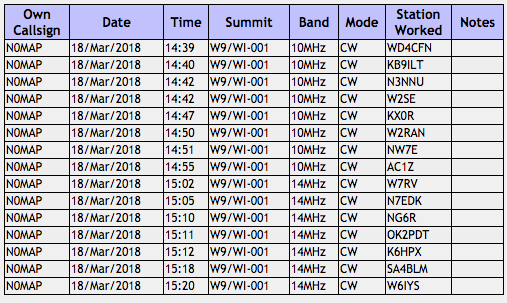 First, none of my research about it revealed that it has a really nice hiking trail from basically the bottom to the top. I’d guess it’s ~3mi each way. I am not a purist as far as hiking up goes, but I vastly prefer it. We didn’t plan the time for the hike, so we drove to the top, ruing the occasional sight of people on the trail heading up.

Second, it was the first spring-y weekend of the year and it was incredibly busy. The ski facilities attracted a slew of people getting their sunny downhilling and the rest came for the mild temps. We searched in vain for an out of the way place to set up the antenna. This would have been the perfect time for a vertical instead of my 60’ end fed wire. In the end I settled for deploying less than half the 60’ and running the ground under the table I was operating from. The KX2 refused to tune 20m so I worked 40m and 30m.

Allison ran interference, keeping people from walking into the nearly invisible antenna. When 30m went silent we packed up and headed home.

Cell and APRS info: I had good Verison data service on all three mountains, though I had no coverage until the tops of Lookout and Timms. I didn’t test APRS via RF on the trip. 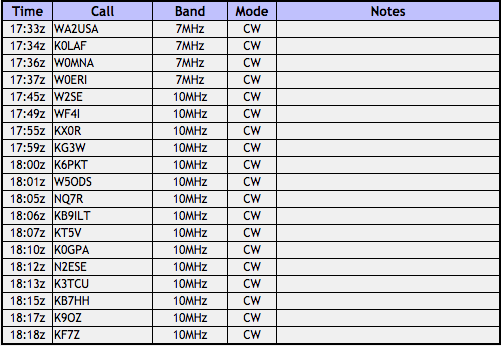 Good job, Joe. Sorry to have missed you while I was at work. I saw the spots when I got home, but was a few minutes too late. Maybe next time.

The resolution that this was the last trip for awhile is already waning. We’re discussing a possible quick run down to the Smokies this weekend if they don’t get too much snow tonight/tomorrow.

The resolution that this was the last trip for awhile is already waning. We’re discussing a possible quick run down to the Smokies this weekend if they don’t get too much snow tonight/tomorrow.

Be sure to check the weather. The forecast from our Johnson City News 11 station is calling for 3 to 6 inches of snow in the Smoky and Unaka Mountains for Wednesday and Thursday. But that is just a forecast; what actually happens may be much different.

Nice report, Joe! I hoped that I might be able to hear you on 40 meters Saturday for a summit to summit contact. Better chances if we’re not in the same state.
Peter KD0YOB

Be sure to check the weather.

Thanks Ron. Yeah I am glued to it (because I’d really like to go). I’d be shooting to do Mt. LeConte and maybe one other shorter route. I don’t worry too much about the actual trail (we’d make sure the snowshoes were packed!) but about road closures etc.

Nice report Joe. Looks like you two have everything under control, with cups of tea and all. Glad I could work you on 2 out of 3 activations… 73 de Scotty KG3W

I was wondering the same thing! We seem to miss each other by 45min on a regular basis.