I went out to visit my family in Grants Pass, Oregon this past weekend and managed to get out for a couple activations. This area is SOTA heaven with many summits and a wide range of approach difficulty. Here are reports for the two I managed to sneak in.

The morning after my arrival in Oregon, I was awake 2 hrs before dawn despite the extensive sampling of Oregon beer I’d engaged the night before. After verifying there was no way I was getting more sleep, I crept out of the house without breakfast or coffee to head toward the closest reference on my list: Bolt Mountain, a never-activated 1pt summit a few miles south. I posted a quick alert, commandeered the family truck and headed out.

My notes were spare, and before I arrived at the trailhead I actually didn’t know how long the hike was going to be. The sign at the trailhead indicated “3mi” and I confirmed this was 3mi each way. My family had plans for me at 9am, and I knew I’d be cutting it close at best. I told myself I’d jog down from the summit and that nobody would miss me too much if I was a bit late.

There is a trail to the top of Bolt Mountain from the Fish Hatchery County Park trailhead, though it’s not always quite so apparent. The key is to follow signs for the “multi-use trail”, though there is one tricky turn at 42.357706, -123.412432. I missed it and added a mile or so to the hike.

Back on track, the trail switchbacked up quickly ascending the obvious summit. I was pretty quickly missing the breakfast and coffee I’d skipped. The sunshine instead of the predicted rain more than made up for it. About a mile before the summit, my phone dinged, which it normally doesn’t do on hikes (mostly because I shut if off). I was expecting an email from my family asking where I was, but it turned out to be Etienne Scott, association manager, welcoming me to Oregon and wishing me luck on the first activation of Bolt Mountain.

I needed that boost as minutes later, I caught a glimpse of what I suspect was a mountain lion slipping into understory ahead of me, uphill and just feet ahead. I have encountered bears in the wild on many occasions, but I have somehow never seen a wild cat. I shouted, banged rocks, and generally tried to not look like cat food. In between, the mountain was silent.

I debated turning around for a moment or two. I figured that if the cat was going to eat me, it would have done so by that point, and I carried on. Looking at a map, I could see the trail wound well around the summit which was now looming tantalizingly near, just a few hundred yards straight uphill to my right. Summits rarely loom in any manner in the east, so when the first game trail appeared heading summit-way, I took it.

It’s not ecologically sound, but heading off-trail 200 yards directly at an exposed, treeless summit is viscerally satisfying. The view from the top was stunning. Comparing eastern and western mountains is beyond the scope of this report, but I will say that I felt like I was getting my money’s worth of beauty for a 1pt summit.

It was probably because I was so struck with the mountains that I didn’t get too upset when I realized I’d forgotten the coax cable which I needed to connect my 9:1 matchbox to the radio. I cut the wire off the matchbox with a rock and connected it to the radio directly. Even without a counterpoise the KX2 tuned 40m to usable SWR. Neither 20m nor 30m would tune, but I only had time for one band anyway, so it worked out.

I had cell service so I spotted myself and got my first contact pretty quickly. I logged five more over the next 15 minutes, and then it was time to head down. I did end up jogging most of the way down, testing my pack and kit for running for the first time. I was way late for the family event, but the fine hike was well worth it.

Exceptionally quiet RFI-wise, and I had good LTE data coverage on Verizon. 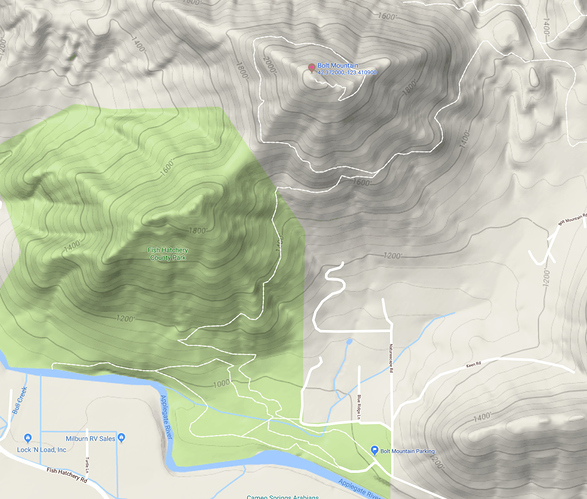 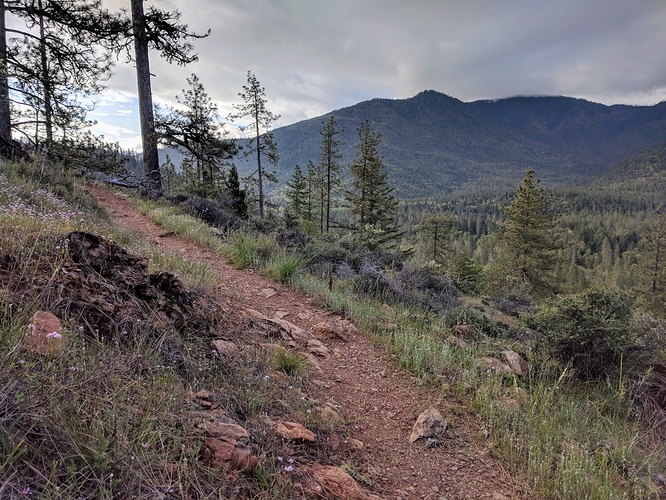 I saw these orchid-like flowers frequently on both mountains. If anyone can ID, I’d like to know what they are 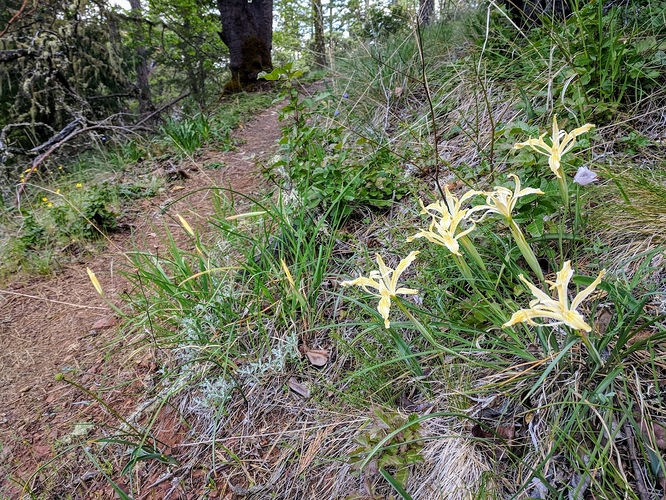 The cat encounter happened just after I took this one 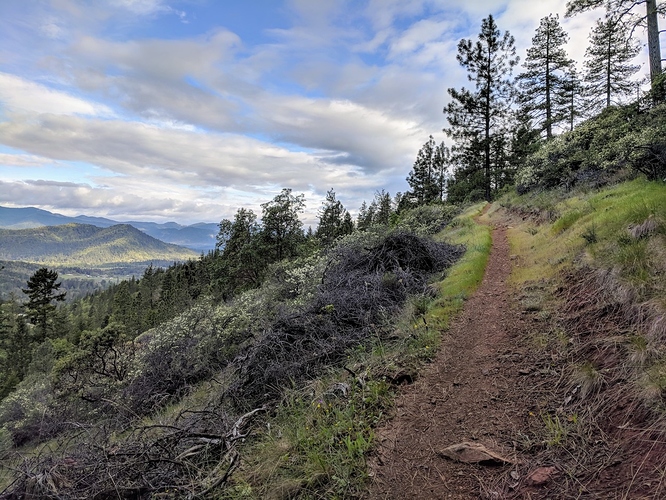 The view from the top was stunning 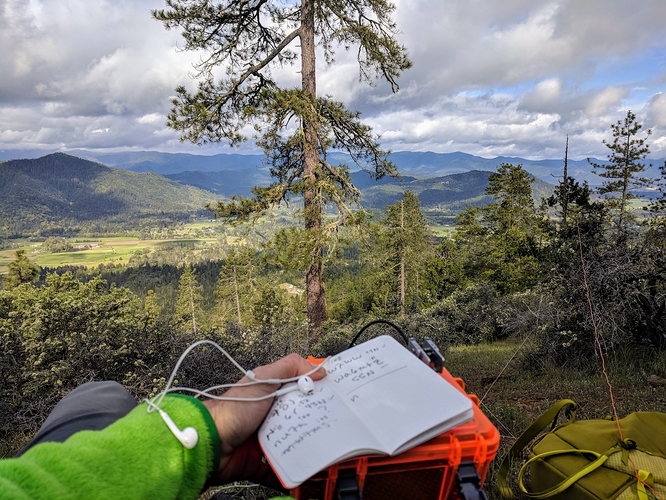 Eight Dollar Mountain lives up to it’s notable name, somewhat unusual in an area that has may nameless mountains. On a topo map it looks like one of the nearby Cascades, a very definite cone not attached to the nearby hills, but it’s doesn’t share their volcanic origins. I was surprised it had never been activated as there is a (very steep) jeep track to the research station on the summit, and the trailhead is just a mile or so from highway 199.

I’d convinced my mother, a pretty avid hiker, to come along for the expedition. Despite the threatening rain, we set off. Eight Dollar is a very straightforward mountain. The jeep track goes as directly up at the summit as possible, often attaining grades that would be thrilling to travel in a vehicle. The total distance from trailhead to summit was about 3.5mi.

We were ascending into the clouds, so there weren’t many vistas on the way up, and the top was completely socked-in. Halfway up the drizzle started and every so often it would switch to full on rain. At the top I snapped a quick photo of the antenna array and then set up my station. There was no view given the cloudbank, but I suspect it would be very scenic in clear wx. I had no time to locate a BCN terminated coax cable locally, so I was once again using my rigged up end fed wire, though I had added a few feet of wire counterpoise.

I quickly got several calls on 40m with signal reports generally better than on the previous summit. I was especially excited to make contacts with a number of people I know. The feeling of being on a summit in a far-away place and hearing a familiar callsign come back out of the (rainy) ether is something new to me and I found it very fun.

That said, at the first lull in responses, I sent QRT and packed up. I’d come on the trip without walking poles as they’re apparently not allowed on airplanes for some reason. Because of that, I think the trip down was nearly as grueling as going up. If you do $8, definitely take along hiking poles. The name of the mountain, by the way, has a bunch of origin stories. The one I like the best: the first guy who climbed to its top wore out his $8 shoes on the trip.

Roundtrip hike was ~7mi, and I had good data service on Verizon at the top. 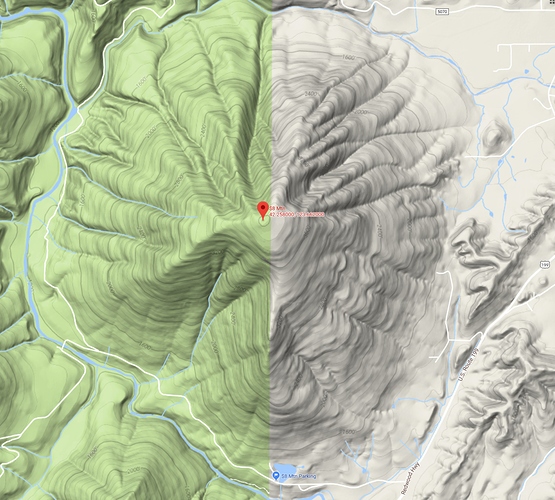 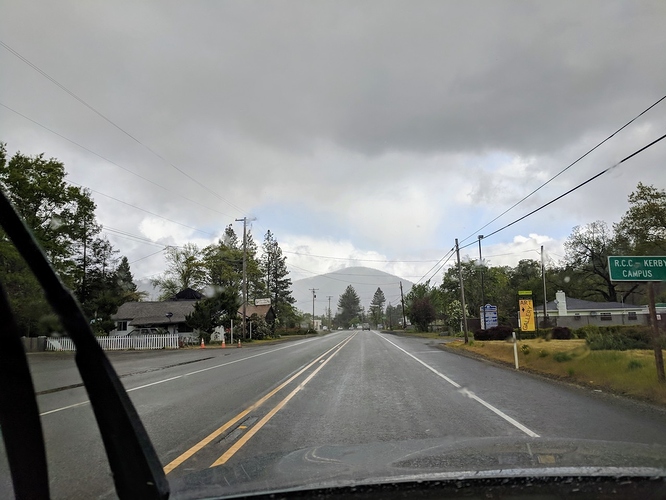 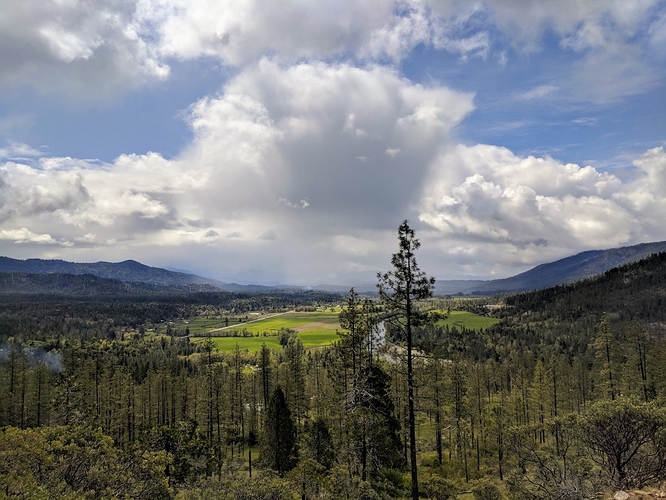 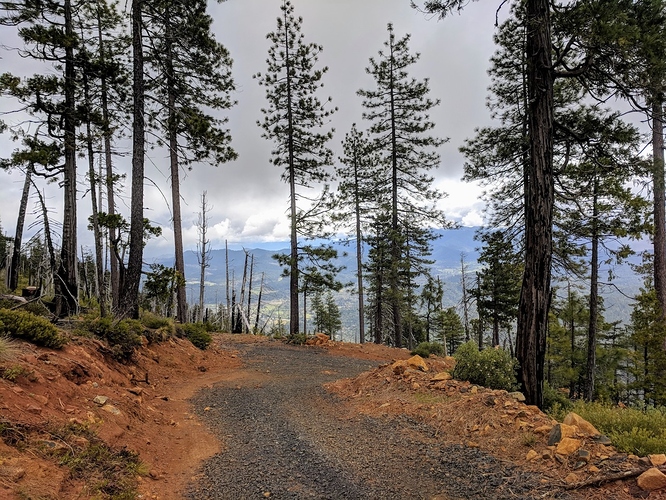 Despite all those antennas, the summit was quiet (at least on 7mhz) 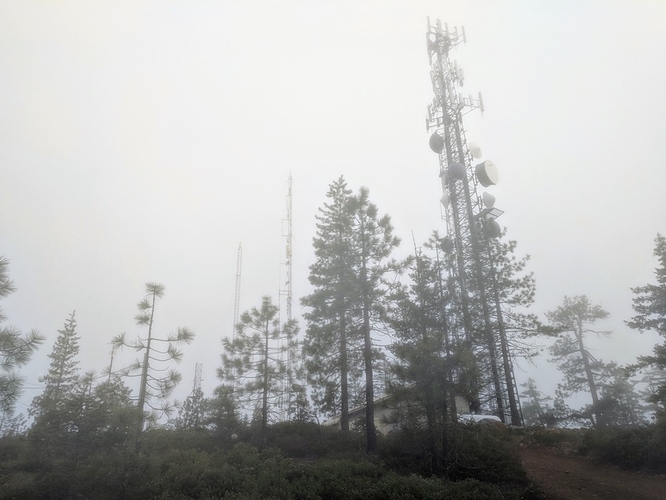 The mountain lion spotting doesn’t surprise me. The Redwoods (south of you) is known for having the highest density of big cats in the world.

Excellent write up and photos!

Nice photos Joe. The yellow flowers appear to be Ground Iris. The small purple ones are Pasque flowers, a sure harbinger of spring here in the Rockies.

Hummm…if I thought a saw a mountain lion slipping into the undergrowth just ahead of me, I think I’d retreat!

The Redwoods (south of you) is known for having the highest density of big cats in the world.

It’s funny because I always expected to see one there (my parents lived in Eureka for many years and I’d hike when I’d visit) but never did despite many hours in the woods. Then 2 mi into my first hike in Oregon, voila!

Nice photos Joe. The yellow flowers appear to be Ground Iris. The small purple ones are Pasque flowers, a sure harbinger of spring here in the Rockies.

Thanks for tip Larry! It led me to learn they are a particular kind of ground iris called a “Siskiyou Iris” named after that region and found nowhere else. Pretty cool.

Hummm…if I thought a saw a mountain lion slipping into the undergrowth just ahead of me, I think I’d retreat!

He was going the other way!

Kidding aside, there really are a bunch of them in that area so if you’re hiking, you’re hiking around them no matter what. In general they’re very shy and stay well away from humans. The only thing that gave me pause was that I was hiking alone (that was actually my first solo activation) and that does apparently raise the risk.

I’ve passed 8 dollar lots of times on my drive over to the coast on the way up to SEAPac in Seaside and have always wanted to bag that one. Glad it finally got activated

Thanks for the trip reports and nice pictures…