Synopsis:
My wife and I set out to activate this peak last Saturday (2017-11-11) but were unable to make it to the top. We tried to avoid the steep hillside to the southeast by taking a longer route along the ridge from the north. We hoped to pass through a short, steep section to gain the ridgeline, and then follow the more gradual slope along the spine of the mountain to the peak.
It turned out that every step of the route was rugged, exposed, and very risky - easily class 3-4 with loose rock and gravel everywhere. Although we made it to the ridge we realized we were getting in over our heads and turned back. The remainder of the planned route (from our turnaround point to the peak) wasn’t worth the risk at our skill level. It looked to be more of the same loose rock and scrambling.
From what we were able to see it looks like the best way to get to the top is from the east side. Plan on doing a short, steep scramble from the valley on the east side of the mountain straight up to the peak. It will be exposed and nasty but short. The longer route along the ridge we tried didn’t save us any effort or risk since it was continuously bad - the hoped-for easy walk from the ridge to the peak never materialized.

Details
The driving route is shown below. From the city of Baker along Hwy 15 you head southeast along Kelbaker road and almost immediately turn onto the dirt. From there you follow the dirt roads all the way to the peak. Under dry road conditions 2wd high clearance is fine (we had a 2wd 4Runner with street tires). Note that the very last section of road that trends east-west is getting pretty bad, so you will have to creep along slowly through there. 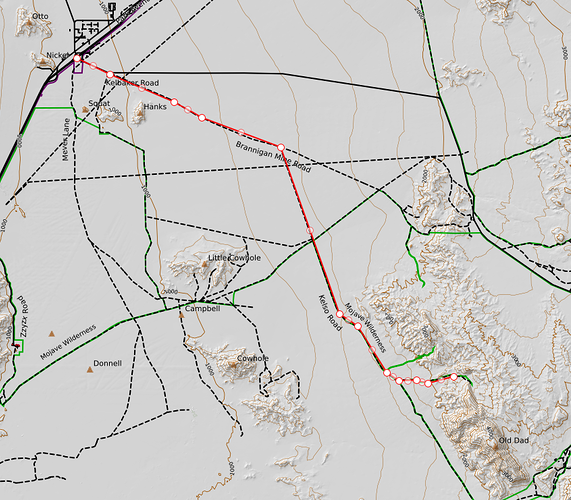 The second image shows our intended route (roughly). We were hoping to pass through the very steep (but very short) section at the north end in order to gain teh ridgeline and take that all the way to the summit, choosing a short steep section and a long gradual ridge walk over a long steep climb if approaching the peak from the south, west, or east. 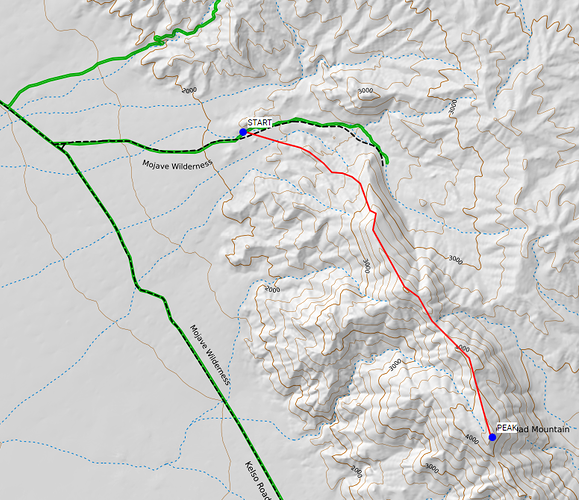 Well, it didn’t work. The next image shows how far we got. I should note that this route is actually feasible if you are interested in a bit of thrill-seeking or practicing your bouldering skills. It just wasn’t a good risk for our team. The way we reached the ridge was to follow a minor ridge southeast from the car until we ran up against the cliffs. We then picked up a goat path and followed that due south underneath the cliffs, gaining in altitude wherever the terrain allowed. When we got to a point where we were able we did an “up and over” to get through a break in the cliffs and gain the ridgeline proper. 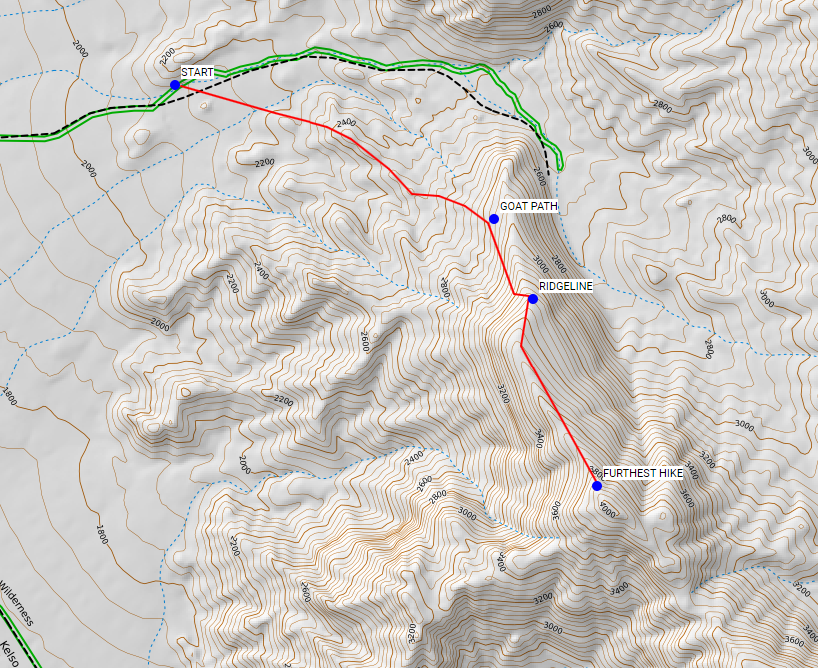 A view looking to the west (roughly towards our car) from the start of the cliffs: 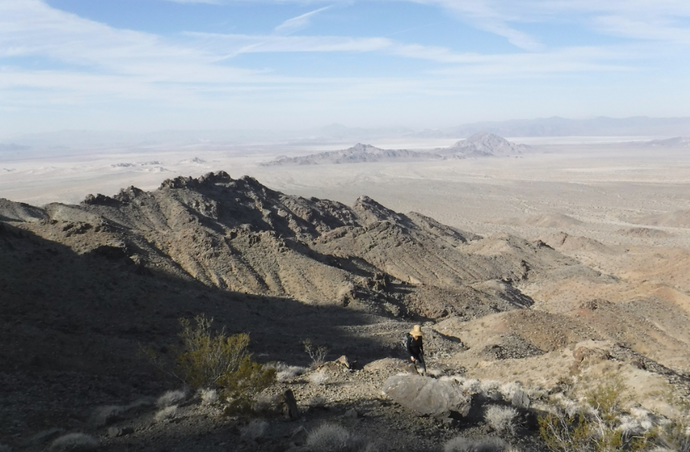 Not the best photo, but you get an idea of the exposure when we were on the “goat path” section. 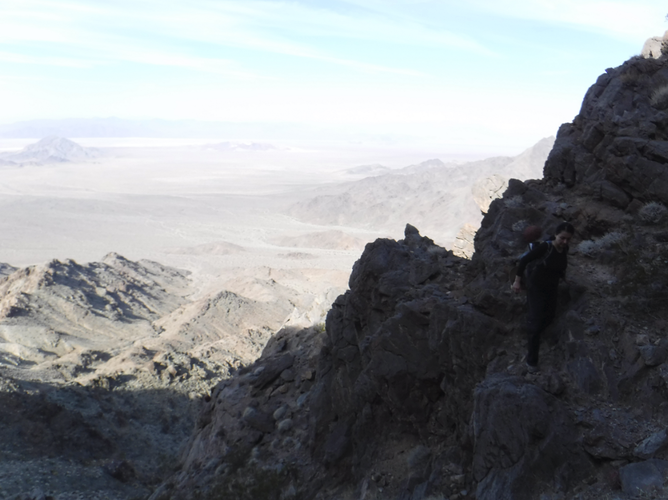 When you actually get onto the ridgeline this is what it looks like. Sections of the route here are actually not too bad. 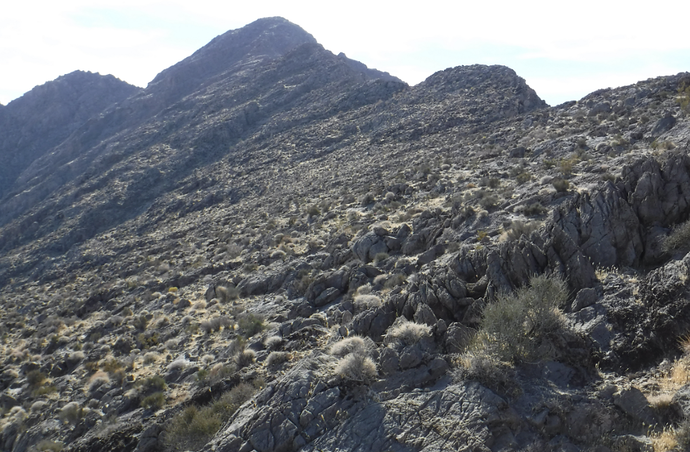 View looking north along the ridgeline showing the cliffs we hiked underneath (the goat path section). The smaller boulders in the photo are about school bus size. 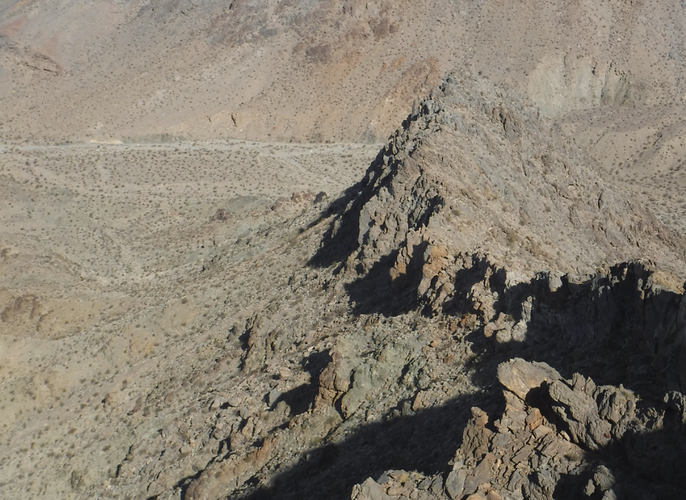 As we hiked south along the ridge it was better than being on the goat path section, but it just never really smoothed out. This image is from near where we turned around, and looks north over what we traversed. I don’t have a good photo showing it, but the sides of this mountain slope down so steeply that you can’t see them where they reach “ground level”. That extreme slope wears you down mentally as you travel the ridge. 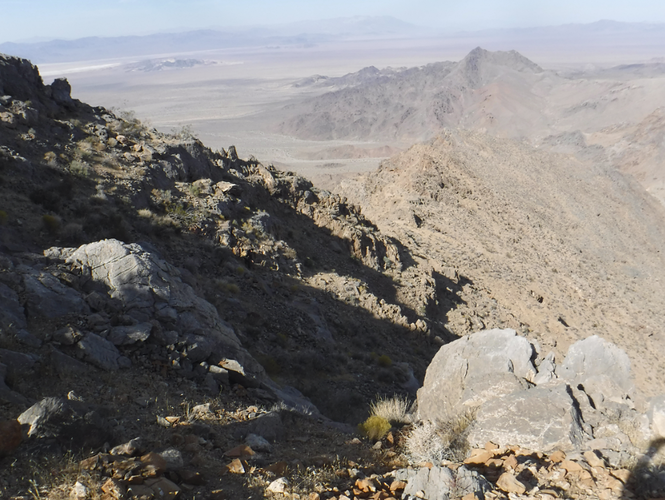 In the end it just wasn’t worth all the exposure to be scrambling along the ridge all the way to the top . . . and to then have to do it all over again on the return. Better to just do a direct ascent straight to the peak from the south or east. The exposure would be the same but you would be exposed for a shorter length of time. This image shows the only view of Old Dad Mtn that we had on the ridgeline, and it was still a long way off. 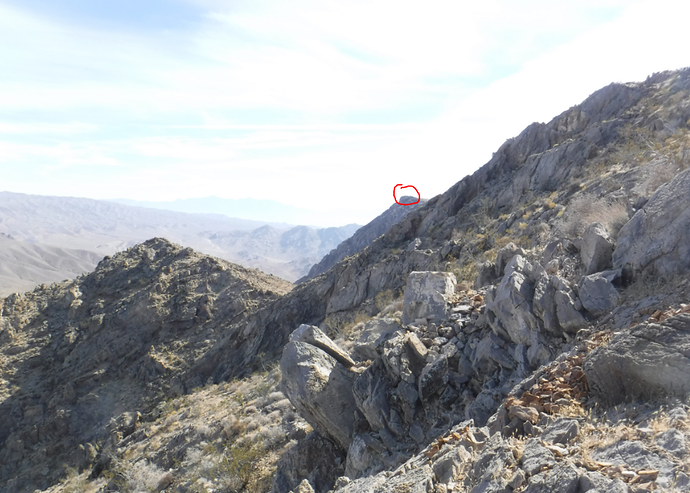 Anyway, after a bit of “What did we get ourselves into!?” when we started going down through the goat path section we made it back to the car in one piece. Anyone up to try this one again approaching from the south or east side?

Well done on setting a GOOD example. When the terrain is worse than expected and above your skill level it is absolutely the RIGHT thing to do, to turn back. It takes some strength to make that decision. There will be other summits or perhaps even a different route to this summit, but had you gone on, things could look a lot different!

Brandon, this peak is on the Sierra Club list of Desert Peaks so, it does get climbed. Unfortunately, the Desert Peaks Section doesn’t provide a climbing route on their web page: http://www.desertpeaks.org/
It may be worth a try to contact someone via the Contact link on their page. Sorry it didn’t work out for you.

Peakbagger.com has trip reports including gps tracks for Old Dad

I’ve used this guy’s trip reports for some of the hikes up here in NorCal. He has excellent info and nice detailed reports. For Old Dad Mtn, he came in from the south and east after doing Granite Peak first, and has info on using the power line road to get to the east side base of Old Dad. I haven’t played in that area since I was a young Marine stationed out at 29 stumps back in the early 80’s, and spent a lot of time playing out at Camp Wilson and even further out in some of those ranges down there… Looks like Dan, NA6MG, has done a lot of peaks in that area, and Adam, KJ6HOT has a few bagged in the DPS too…

Hi guys,
Thanks for all the feedback. I remember reading a book on high altitude mountaineering and the saying always stuck with me: “getting to t top is optional . . . but getting down is mandatory.” Good advice.

Also, I think some of the fun of this hobby (and peakbagging in general) is that some of the time you WILL fail to reach the peak. It could be because of weather, fatigue, time, or anything, but there is always a chance that you won’t be able to complete the route. That makes it challenging, but we also have to accept the fact of failure sometimes and come back again.

My wife and I just moved up to Alaska (CA was too crazy a place to live for us) so I don’t know when I’ll be back to Old Dad Mountain, but I’ll definitely be back.