The short version, Brown Mountain, W0M/SF-008:
I followed Google maps into the small hamlet of Iron Mountain lake, and found Grandview Drive, which goes right up the mountain. You will need high clearance, but not FWD, my Toyota Corolla made it fine. The road ends after about 400m. Bushwack the rest of the way to the AZ. No cell service where I left my car, but decent service at the AZ. Plenty of places to hang wires or erect a vertical. Bushwack was easy, with limited undergrowth. 31 QSOs, no S2S. Band conditions seemed quite good.

The long version:
You may have noticed my alert initially stated W0M/SF-007 (Stono Mnt.). I decided to bail on that, as the gate was closed and I wanted to try to get on the air before EU sun down. Off to Brown it was. The hike up was sorta steep, and a total bushwack. It was an easy bushwack, as there is next to no undergrowth. Once inside the AZ, I erected my 20m vertical, got everything sorted, and started on 20m.

20m really was the money band, netting ME, MT and some DX, with WB7QDR first in the log. By the time I worked my way down to the 40m band, the fingers were getting stiff and had to back the keyer speed down to 18 wpm. Apologies to N4HNH and N4SO, as my fingers were really getting stiff. Finished out Brown Mountain with K9IR.

Drove to Taum Sauk, and put up the 30m dipole this time. Things were quite a bit slower, but I was still getting out with KW7RV first in the book on 20m. Worked mostly 6s and 7s on 20, then switched to 30. While I didn’t bag many QSOs here, I did work 3 S2S here, which was nice. 40m produced mostly midwestern QSOs (as expected), and an additional S2S.

I waited around to bag KX0R S2S on 30m at the end, and was hoping that AC1Z would move from 60m to 30m, as I just couldn’t make out enough of his signal to try S2S on 60m. Alas, he moved to 20, and I moved to get going home. All that water and tea that I drank was needing an outlet. Plus, the fingers were a bit chilly. I got out just as the snow really started.

All in all, a good day – thanks to all the chasers and S2S contacts! I heard lots of folks who didn’t end up in the log. That’s the nature of QRP (I’m running 5-10W), I may disappear and then you never call back.

And yes, the State Park toilet seats are cold. It did warm up to tp -7C, Balmy.

Guessing it was W7RV? he is often first. Congrats on the winter (cold!) activations.
Peter KD0YOB

Quite a bit different than 2-3 weeks ago ;-). Tnx for braving the cold, Jim. Winter activations have their own challenges Sorry I wasn’t around to also work you on SF-001.

The cold weather has unique challenges and reminds me of growing up in Wisconsin. My prototype cold weather iambic key acquitted itself quite well. Operates well until your digits are too stiff to move. And at that point, it’s time to move on. 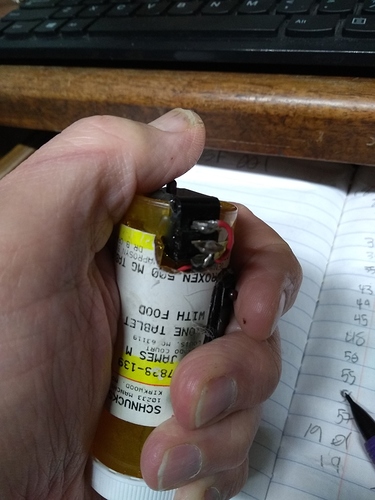