Following yesterday’s successful Dx activation of VK1/AC-040 Mt Ainslie, where 20m band conditions provided a good opportunity to work JA, ZL and northern hemisphere SOTA chasers, plus a 5-5 S2S with Mike 2E0YYY on Gun G/SP-013, I plan to activate Mt Majura VK1/AC-034 on Sunday from 06:30 UTC through to 08:00 UTC.

I’m seeking S2S contacts on 20m SSB with activators in JA, ZL and Europe. For those interested in WWFF, Mt Majura doubles as a VKFF park reference.

Hope you got a couple of S2S contacts into EU Andrew. I could hear you when you were on 330 and was waiting for conditions to come up a little but then the contest stations started up and even 150 was unlucky for me as there were some Russian speaking stations chatting.

It’s always a problem with “local” QRM as the activator at the other end often doesn’t hear them. It probably would have been a marginal contact in any case, had we managed it. What your action does show however is that conditions are improving at last!

DID hear you yesterday, shame could not get back but did note lack of chasers which surprised me.

Good to hear a bit of LP propagation again Andrew,great to work you on Mt Ainste and again today
(Sunday) on Mt.Majura.
I think Karl there was a lack of chasers as they are not prepared to listen for conditions to favor us,
I monitor the activation hoping conditions will prevail and sometimes they do. 73 Don G0RQL.

I was probably a bit too late onto G/WB-004, then all the contest stations meant that I was hopping about the band due to the w-i-d-e signals that some of them seemed to be putting out.
I did listen for a while on 330 but it was impossible to hear anything past the splatter, unfortunately.

Other than that, didn’t get very far at all.
Don
m0hcu

Thanks to everyone who listened and tried to work me on Mt Majura VK1/AC-034 & VKFF-0851. Strange conditions on 20m last evening, at 0630 UTC the band was open to Europe, New Zealand and Japan for an initial 12 Dx QSOs.

At 0744 UTC I moved back to 20m to find the band in total silence, almost as though the big propagation switch had been turned off.

I listened for Don M0HCU for 15 minutes, nothing received, sorry Don I will try again soon.

Subject to Wx, I will try 20m Dx later this week.

I was initially tempted to head to a nearby summit and join you as I had the afternoon free, but the forecast weather in vk3 was not ideal or even safe for SOTA. 122km/h winds reported at Mt Hotham VK3/VE-006. From the debris around our suburb, I may well have needed a chainsaw just to get out of the city.

Hi Andrew, thinking about a good location away from Melbourne’s noise, Mt Samaria north-east of Melbourne has a good 360 outlook with no close-by obstructions.

The walk to the summit is around 30 minutes.

I’m keen to work S2S with G and EU countries. Of particular interest, I am seeking one additional S2S QSO with HB0, CT, EA7 and GM uniques to gain points for the Mountain Hunter award.

Okay, subject to me not getting soaked again, I’ll activate something.

Samaria is a bit far. I’ve got a bunch suitable of summits which are quite close, but all in forested areas and they still haven’t restored power to many houses in the region after Sunday’s storm.

In any case I ran the numbers for getting away on Friday and I can’t squeeze in a weekday activation with enough margin, unless of course I was too sick to go to work, but magically improved for a hike by the afternoon

I’ll aim to join in next Saturday.

I had to smile when I saw M0ZDZ’s portable station on qrz.com

I see what you mean … 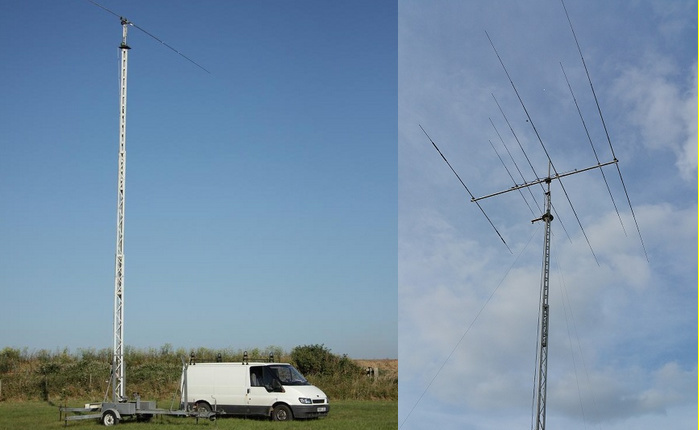 Nothing but noise on 20m - conditions terrible

Hi Ed and Mike, despite difficult conditions (high K index), propagation from Mt Stromlo was not a total loss. On 20m 14.310 MHz I was fortunate to work Masakazu JA2LMA and Tadashi JA1VRY both SOTA chasers. Coverage on 40m extended to 1500 km working VK2, VK4 and VK5. In Europe these distances would easily fetch Dx contacts.

I will try again Wednesday 19 Oct from 0700 UTC for one hour. Oops double booked. Changed to Thursday

Hi Andrew,
Glad to say the following day conditions here were back to normal, or even good, so lets hope there’s no more CMEs heading this way for a while! Worked into VK3 this morning (albeit home station to home station).

When I saw the K index hit 6 on Friday, I knew a s2s contact with you would be something of a challenge. So reluctantly, I cancelled.
.
73 Mike
2E0YYY

Hi Mike, I was out on VK2/SM-059 on Friday for a late night activation that should have been good for EU shortpath, but conditions were absolutely dreadful with only 4 contacts on 80m and one on 2m - all within a thousand km. I did try 40m and 20m, but nothing heard.

Unfortunately it was an unalerted activation due to the primary reason for being there. I was assisting with communications for a hiking event where the participants were dropped off at an unknown (to them) location and told to find out where they were and get to an end point. As such, couldn’t really advertise where I was going to be until about the time I activated.

As the weather matched the propagation I was not really that keen on hanging around there, so cutting it short did not require much arm twisting for me to head back down the hill to the campsite with a nice warm fire and a couple more beers.

20m LP seems to be back to a reasonable state - currently working a good stream of Eastern and central EU ops on JT65.