Short status report from my activation on OE/OO-075.
I had no success on 40m and 20m to VK ZL and JA. I heard a QSO with a station in ZL but I guess QRO.

But a lot of stations and S2S all over Europe in the log. Thanks to everyone taking part in the event and specially to the organizers.
Will need some time to get my audio recordings, video and pictures sorted for a video. Did a double activation (continued to OE/OO-271) so a lot of stuff to do tomorrow.

First time out playing radio for some time. Found one of my LifePO4 batteries completely dead last night (Don’t think it has been used for over a year!), seemed to charge up OK though the FT857 seemed to have reverted to it’s ‘default’ settings…I really should check things out before going out next time

Blowing a gale (as always) on G/WB-004 and at times I couldn’t see more than 10m. I couldn’t find anywhere out of the wind, since they demolished the old NATS building near the trig. Only stayed a short while, and only on 40M so thanks to those who called and/or replied. After the log book blew away, and I had to leg it to retrieve it, I decided to give up

Thanks to those organising it, and all who called! 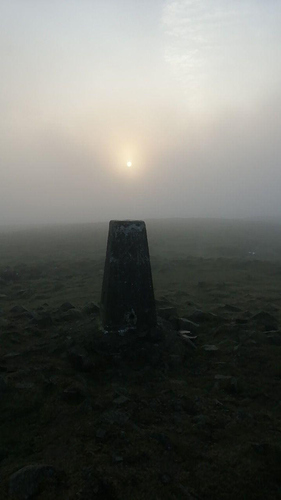 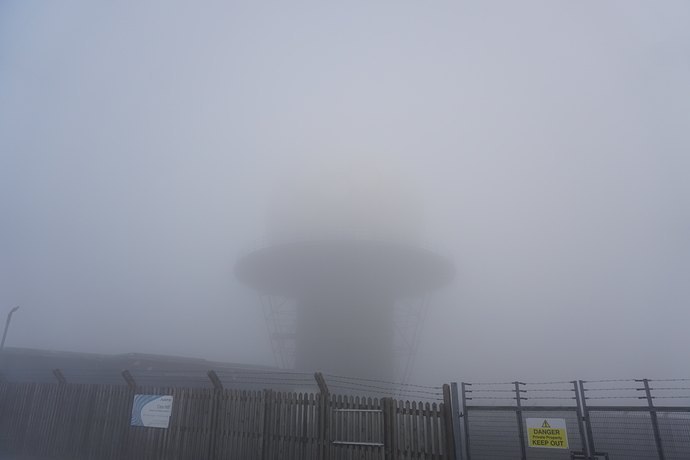 I started out of bed at 4:45 am local time. I wanted to activate a new summit for me DM / BW-019, which has no forest at the top. Punctually at 06:45 local time I left the parking lot to ascent. There is a lot of space above - but unfortunately between some transmission towers. So 20m did not work … I could not hear anything.
I hope I did not miss to much. - But I have my first two VK s2s at all …on 30m. So i’m happy!

The next time I’ll take a summit without any transmission tower.

No luck for us in terms of VK/ZL/JA contacts either.
We mainly chased but couldn’t hear any stations over there - not even in CW. However, we were able to collect a nice list of S2S stations (mainly on 40 m). 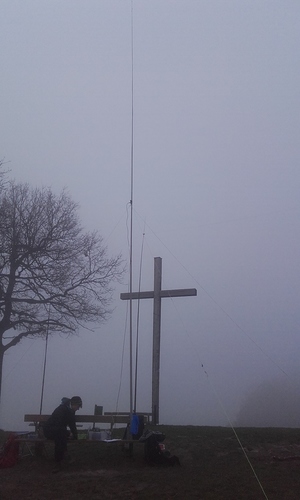 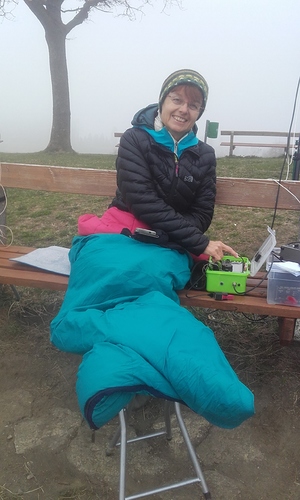 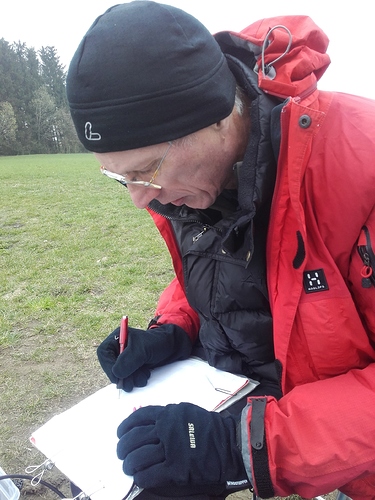 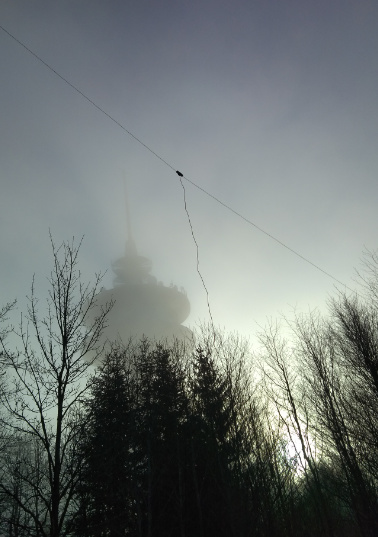 There’s a TV transmitter tower in there somewhere!.

My report later on my blog site but in short - 6 S2S contacts around Europe - furthest was Marat RA9WJV/P on R9U/SO-235 but no VK/ZL/JA contacts today but for 5 minutes on 20m there were some VKs booming in but I couldn’t break into what seemed to be a local net. Then they were gone as the MUF dropped back below 14MHz.
Another early start and cold one (minus 1 at the car park probably -2 or -3 on the summit) despite the local weather forecast to the contrary.

A full report will follow, but here are the highlights! Up at 04:00 UTC and on summit at 05:00 UTC, G/LD-050 Gummer’s How is a 30 minute ascent with 360 degree views at the South end of Lake Windermere in the Lake District. Snow still just about clings to the highest summits in the Lakes. 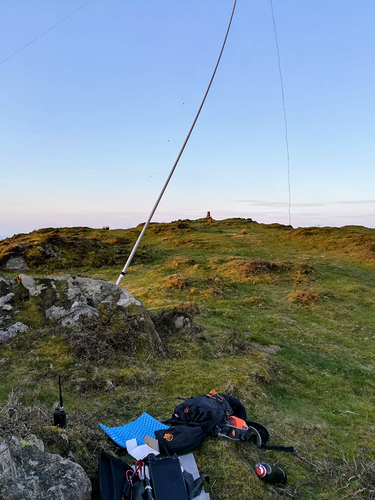 WX was much nicer this S2S event and after a chilly start it turned out to be a lovely day, with only a light chilly Easterly wind.

Obviously great to get the VK S2S contacts, made up about that, but I get a real thrill with EU S2S as well and it was nice to talk to everyone in our ‘club’. Makes me feel part of a very special group of people.

Good evening to our friends in Europe and the UK, it’s now 6 am in VK1.

To the HF component of my evening from 0500 UTC to sunset 0700 UTC. On 40m SSB I had the absolute pleasure of working Mike 2E0YYY/P and Mark M0MON/P both S2S, one other UK chaser included 2E0WDX. Elsewhere in EU I worked Manuel EA2DT and Fred F5UJK. Signal strengths ranged from 55 to 57, the 40m propagation window was definitely open between 0600 to 0640 UTC.

My HF antenna is a 40/20/17m linked dipole supported by a 9m telescopic pole. Once again the linked dipole has proven to deliver.

Thank you to everyone who participated either as an activator, chaser or SWL.
A big thanks to Mike and Ed for their help in publishing this event across many media platforms. The next VK ZL JA - EU S2S QSO Party will be held in October 2019. 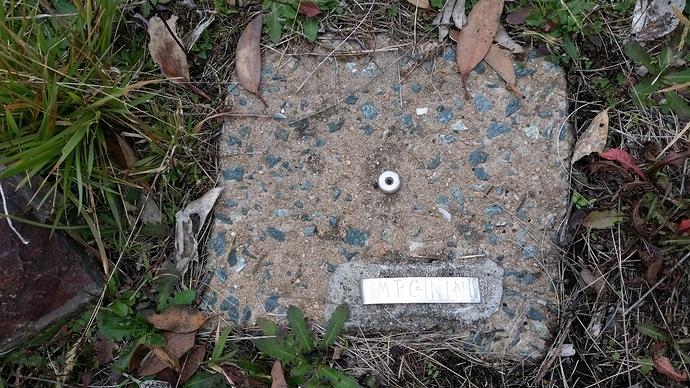 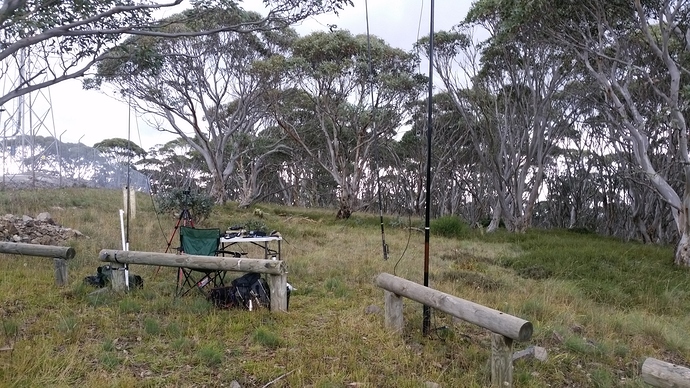 Thanks Andrew for the amazing S2S. If you want to know how your audio ended up on the other side of the world, an excerpt from our QSO is here:

A cold wind on Shining Tor this morning. I was well hidden behind the dry stone wall.

Forget 20m in the morning, it’s bang out of shape. Only DX on 20m, was Ernie VK3DET and after about 15 minutes, he was gone.

Thanks for DX s2s with… 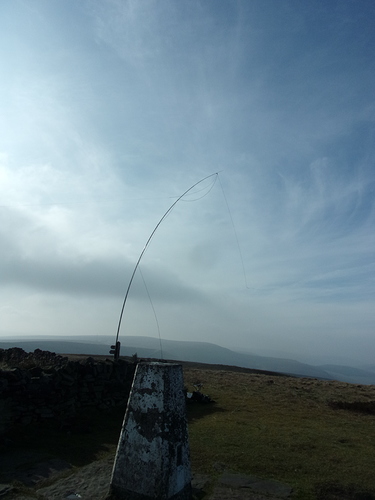 I missed this event due to being double booked.

What date (or possible options) is the next event?
Maybe 21 September 2019?

Our contact was S2S. I was on VK3/VT-049. I tried to get the summit code through several times without success. Thanks for your perseverance to get the call and reports through OK despite the QRM.

I started with some local contacts on 1296 but only just “qualified” with 4 distinct callsigns worked.

I agree with the comments on 20m, my antenna worked fine and was hearing well but propagation was very poor there. My only logged contact was with Wade VK1MIC about 20km away.

30m was better but although I made a few good contacts, an S2S with DF4FO was marred by QRM and possibly some fluctuating conditions, as just when I was trying to receive the RST report, QRM and QSB took over, I think Christian lost my signal after that as my pleas for repeats on the RST were unsuccessful. Other contacts on 30m were KH7XS, VK6NU, ZL1BYZ and ZL2ATH.

On 40m SSB I made contacts with 2E0YYY (great to make the distance again) then on cw: VK2IO, ZL1TM, ZL3ATS, VK7CW, VK5OUI, VK4TJ, an S2S with HB9DQM was spoiled by QRM at both ends, so I never received my report despite numerous requests RST? Etc. and I can only suspect QRM at Manuel’s end of the path as well as mine, where a helpful operator responded to my HB9? Qrz call, by sending at s9 strength “you have been conned” and under that noise I could only just hear Manuel.

Finally just on dark I dropped down to 80m for some relaxing contacts with VK3PF, VK2IO, VK2YW and VK2LEE on ssb.

Although I constructed the 3/8 wave antenna for 20m by adding a link and a 50cm extension to the 30m vertical, with 3 radials switchable between 20 and 30m (slide switches at the appropriate point) the 20m band was not playing nicely and that was all wasted. The pole collapse and a later pole fall caused by the property owner tripping on a guy line after visiting to say hi and bye as he was finished his hang gliding (he was very apologetic and nothing was broken so quickly fixed, I reassured him all was ok) added flavour to an otherwise disappointing event if counted by number of EU s2s. I packed up in darkness after 0800 (7pm local time), got home just after 9pm.

But still, it was a successful SOTA activation, I qualified the summit on many counts, 1296, SSB and CW, 40, 30 and 80m, got some good contacts. Thanks to the organisers and to all who participated. We will do it again…

Neg on QRP - 40w chasing the hard stations like you

Mini vid coming… video of the MM and 2E0 contacts… plus a F5 coming.

Last night I was propped up on Mt McDonald VK1/AC-048 for about 4 hours with 2 main goals - test my mini 40w amp with the 817 and to really give my DIY 10ah LiFePo4 battery a walloping to see its handling. The actual activation and DX was all a bonus.

I set up my 80-10m linked dipole and made a number of contacts on 80m including a s2s with VK5CZ Ian - was a real pleasant surprise.

As the night wore on the QRN was getting worse and worse with s7-9 crashes - not great when you are working a station that is barely tickling the digital s meter.

I have the second half of @2E0YYY and @VK1DA’s SSB contact, all of mine and the F5 on video too.

FYI 4 hours of calling on full power used 4.5ah according to the metre in line.

The walk down was stunning, as you will see in the video, I was a little gushing and awestruck but the vista and colours looking back east from the summit, with Telstra Tower, all of Stromlo’s observatory hardware on view, as well as the space comms dishes peaking out from behind the ridge down at Tidbinbilla.

Thanks again all for the contacts.

Thank you for a lot of S2S. 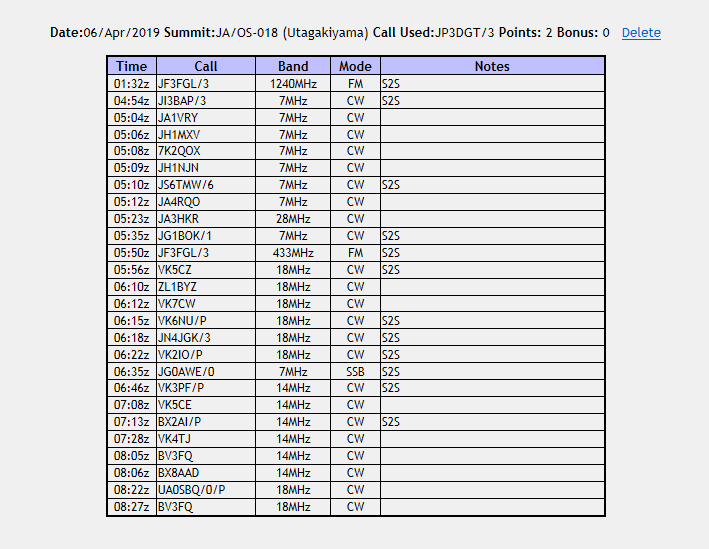 It was fine weather. 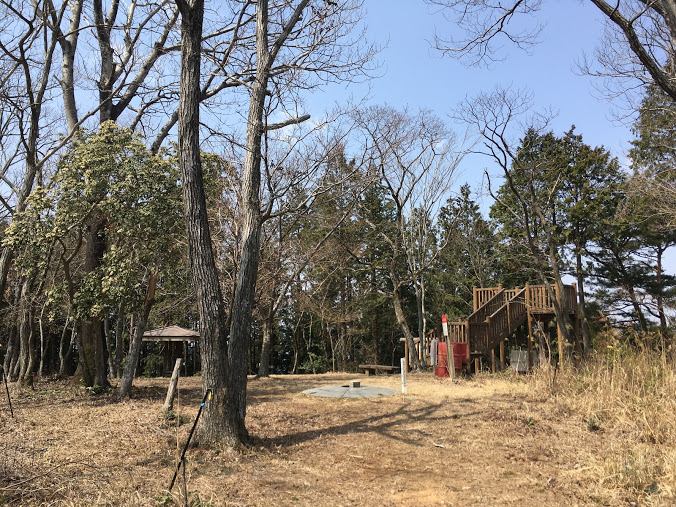 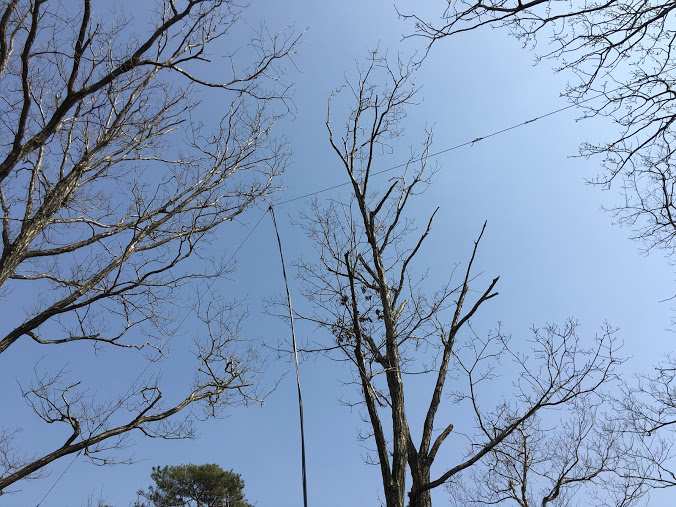 A late minute diasaster with my activation at Mt Lambie. My usually reliable LDG autotuner locked up and would not tune. Some frenzied checking of leads and everything which took a while to no avail.
Intended to use the autotuner with the KX3 and 45W PA but it was not to be so bypassed the tuner in the end and ran the KX3 at 10W barefoot.
Was in a somewhat confused state at first and fear some of my morse was a tad incoherent. 40M was not very productive so hopped onto 30M and what a plenthora of CW signals !

30M was jammed full of callers and qso’s in progress everywhere. 30M was the place to be.

Have not yet tabulated my results as yet.

Most incomming DX was rather weak which made it difficult to pick out callers particulary when there was three or four calling in at the same time.

Yet I was getting mostly pretty good reports from UK and EU.

Sadly due to the early crash missed out a bit I fear, still stuck it out to the end and had a good time.

Clear this is a popular event and well patronised, my thanks to those whom I contacted and another thanks to the organisers of this event.

Will pull the LDG apart and see what is going on, usually it is a very reliable device.

Here in the souhern France it was a raining day … then no activation.
I listen many activator, i try to listen FT8 and i was lucky to QSO MM0MZW/P.
Next time.
73 de Roger

30m CW was playing well, with ZL, G, HB, DL, VK4 and VK6 in the log. 10 x S2S. I was running QRP with an FT817 and ¼ wave ground plane antenna. My apologies to those who tried calling me a few times, but I was unable to fully copy some callsigns to make a valid contact. Very nice afternoon watching the kangaroos grazing and the sun setting over the mountains. 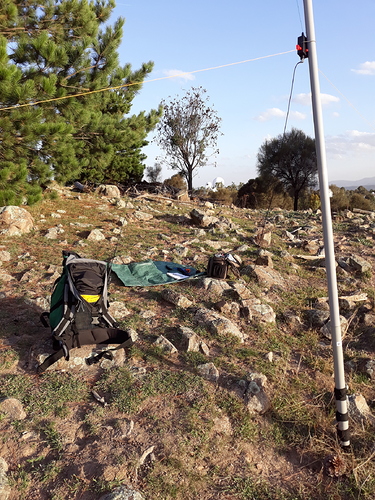 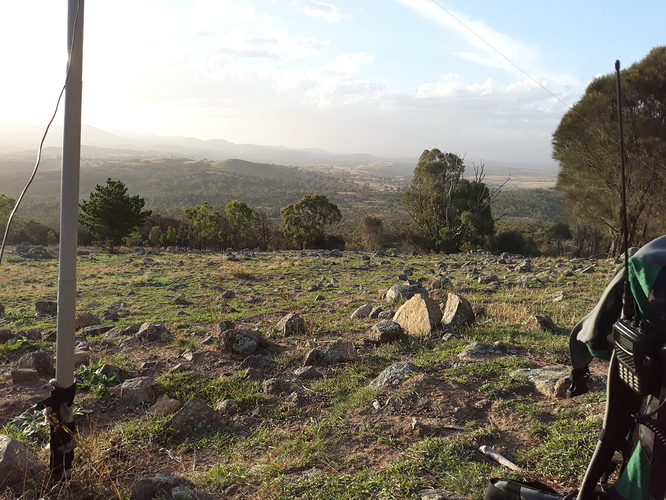 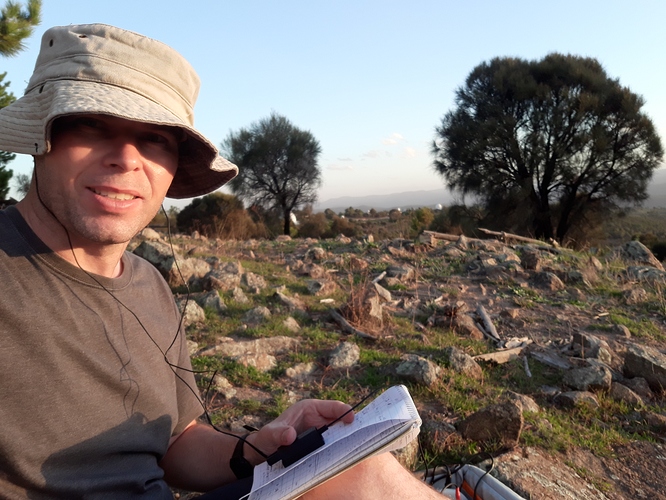 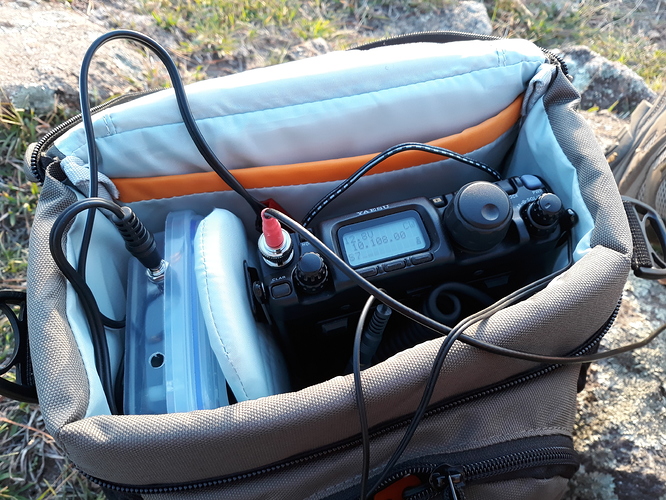 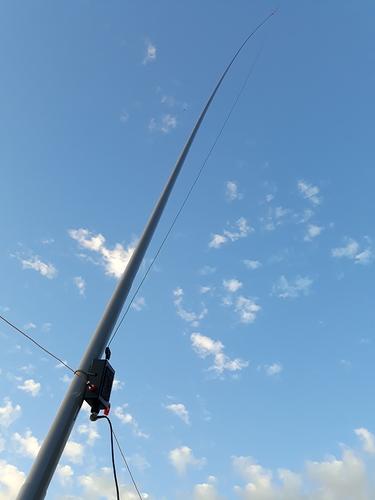