That would make more sense here too, actually.

Thank you for the explanation. I really don’t knew it.
Looking for Wx it seems that we should start our seasons in different dates as well.

Look at Tom’s website for some pics Andy. You will see a nice stone wall and fence posts adjacent to support the pole. More or less ideal I’d say, if the wind is blowing in the right direction … which of course is unlikely.

I still haven’t decided what I am doing myself - might break out the second call for its first outing on HF and take a trip up to Bardon Hill G/CE-004. If not, will be listening from home, specifically looking for VK/ZL/JA activators…Hoping for some decent propagation.

Here’s the current list of activators including those who said either on the reflector or via social media that they may be taking part but have not, as yet, alerted on SOTAWatch:

In parrallel to Mike 2E0YYY’s activation this morning (documented here: G/SP-013 report...A dry run for Saturday ) I monitored wspr.net and the real time propagation world maps told me the following, which might be useful for Saturday.

Nothing to speak of on bands above 15m or below 40m.

Thanks for lots of nice info @DD5LP

Here’s a map of the participating countries 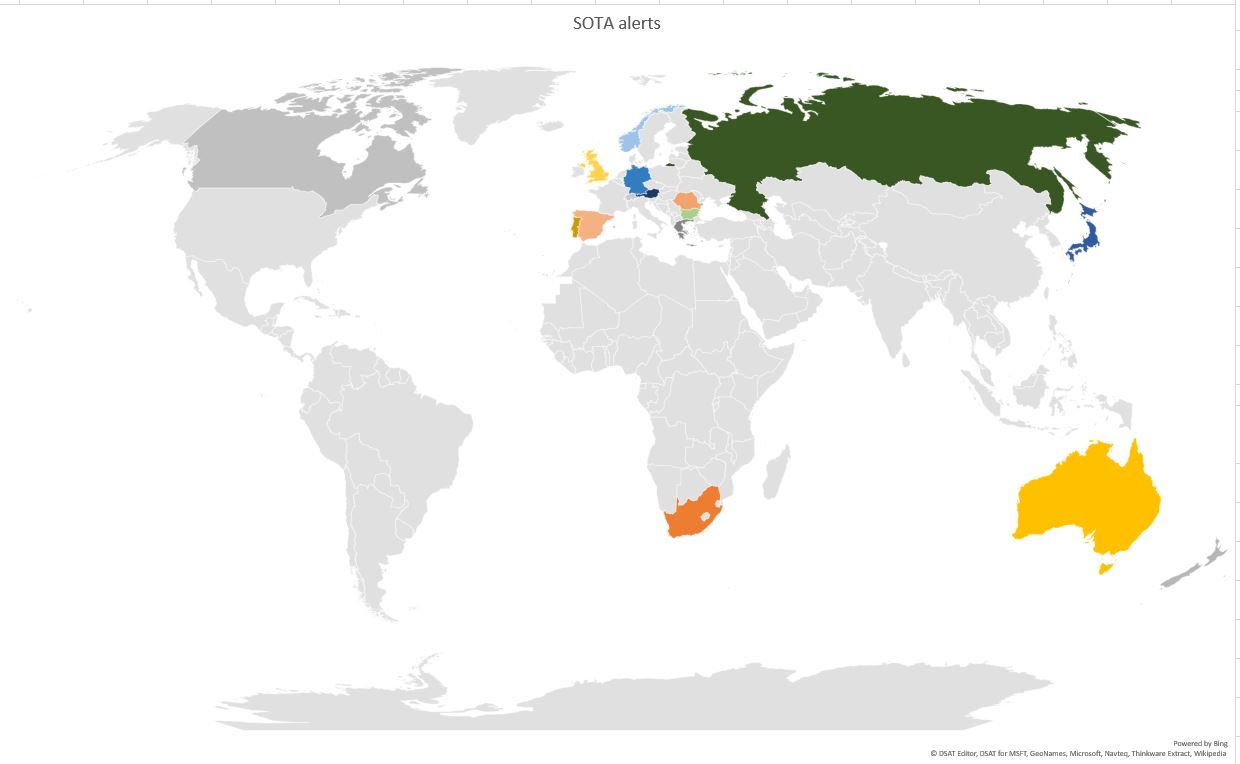 LM10SOTA will most likely also be active from LA/TM-011, depending on WX conditions and snow depth.

There’s always room for some fun for those who want: SOTA Bingo is a randomized sheet of people who have posted alerts (updated as of now).

Note: all prizes must be supplied by yourself, this is just for fun.

Thanks for the useful info re propagation Ed. If I make it up, I may well switch to 40m after about 0745 to see if any insomniacs are playing in NA!
Otherwise it’ll mainly be 20m SSB for the DX (anyone out of sight welcome) and 2m FM for the fellow loonies in NP (local S2S just as welcome as the DX).
The latest forecast has shown 20-28mph easterly wind, sub zero temp and (the good news) the snow being replaced by heavy rain. If my flight home tomorrow is delayed I won’t be able to make it up before dark and will wimp out. In which case I may drive out to chase on 2m.
Good luck all

Hi Razvan,
You’ll stand a lot better chance with 40 or 50 watts of SSB than 5 watts in the current conditions.

Thanks Kjetil, I’ll add LM10SOTA to the spreadsheet.
Ed.

Spreadsheet (above) now updated with this and two more new activators - welcome to 9A6CW and 2E0AXL.

I will also do SSB if battery will allow me to in these cold conditions.

After several options considered, I think I’ve made my decision and instead of:

This is the track I’ll follow and there you can see the orography of the terrain. All my fingers and toes are crossed hoping for no ice, no rain, no wind… and the propagation Gods in a good mood. Nothing else…

Just made a change of Summit, now doing Mt Blue Rag VK3/VE-021 instead. It’s a nicer Summit to visit, but a little more driving on 4WD trails. All other details remain the same.

Have a nice trip, hope to meet you on the air

and the propagation Gods in a good mood.

Did you sacrifice a sacred SOTA goat to appease them?

Hi Toru, can we expect an alert for you in Sotawatch please. Also will you be running SSB? as at present the two alerted JA activators are CW only.