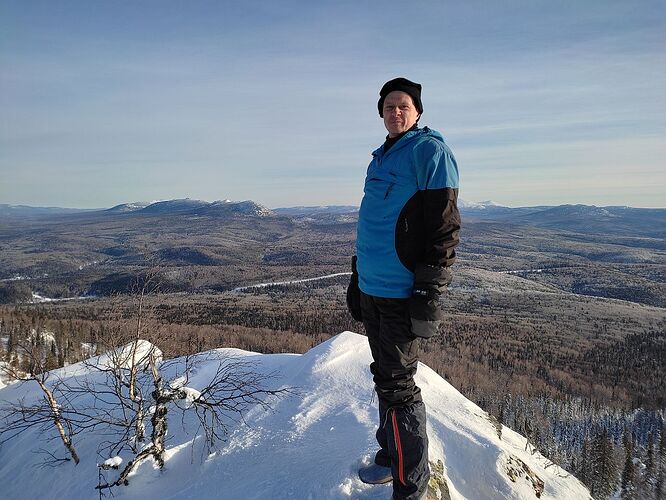 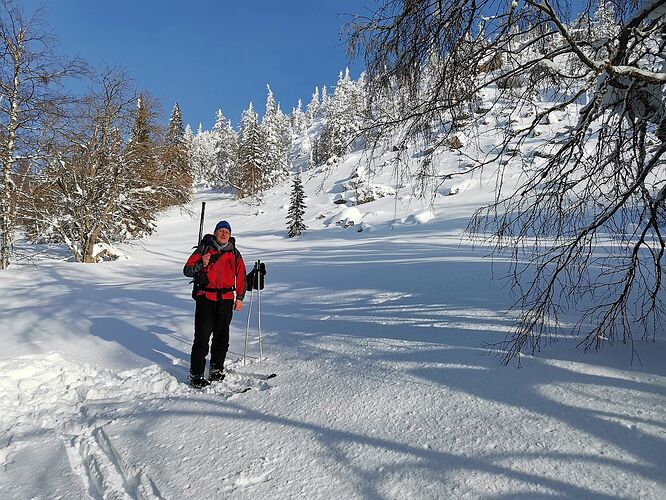 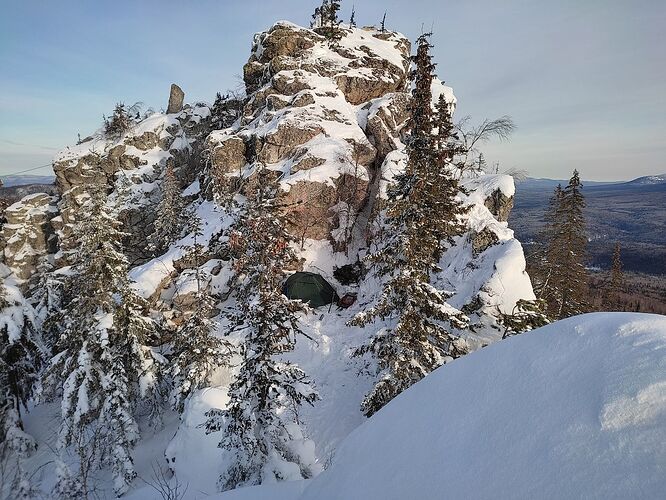 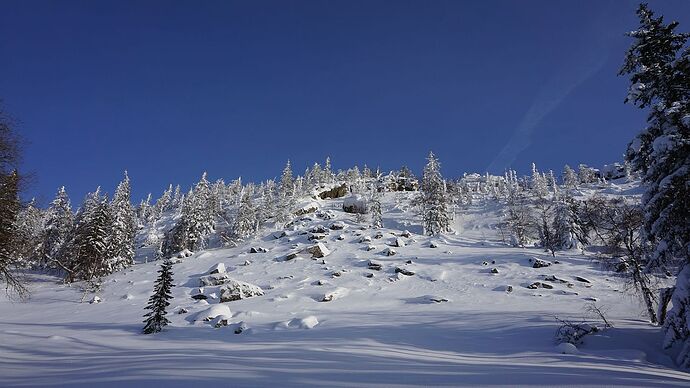 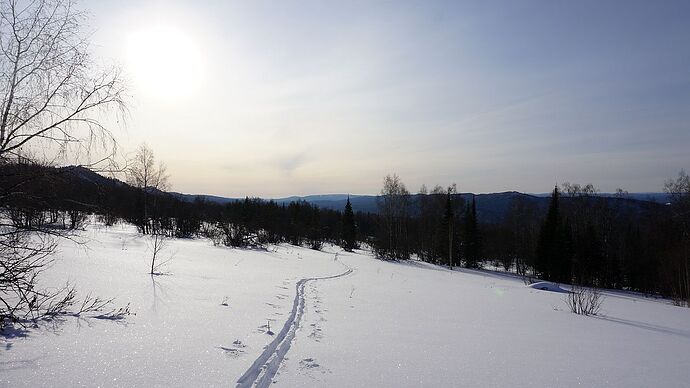 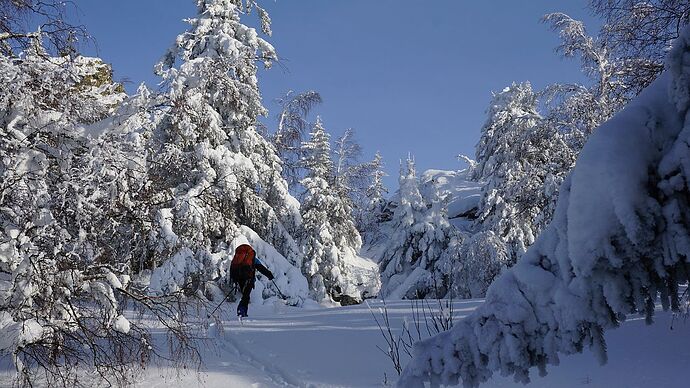 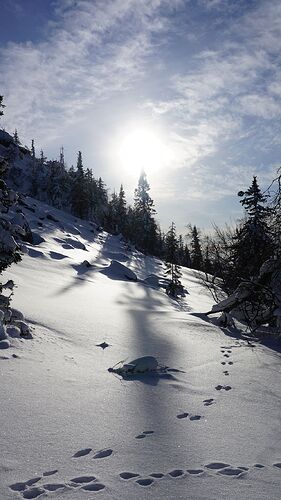 DSC021081280×2275 595 KB
The most important thing is - we managed to find a place on the top, suitable for installing antennas and camping. Of course, we had to make a platform for the tent - a “balcony” in the snowy slope 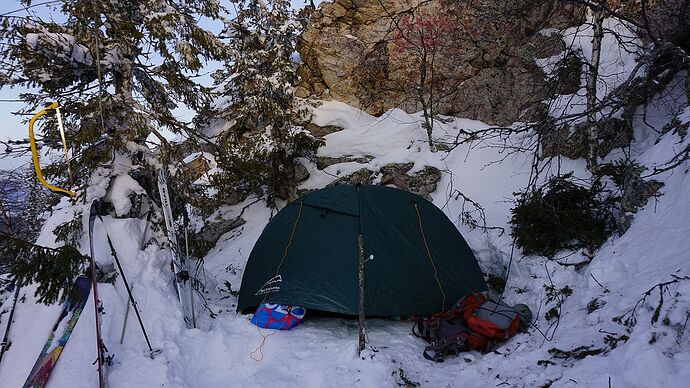 DSC020971280×720 268 KB
. And in order to stretch the dipole by 7 MHz, we had to climb snow-covered rocks in the dark. On this trip, we did not take the usual campfire equipment - the summit is located in the reserve, it is forbidden to kindle fires. We managed with a gas burner, there were fewer problems and it was warmer in the tent. In general, I planned to set up a camp and antennas in a clearing, under a rock - a summit, and stretch the antennas between the trees. But Alex suggested a more extreme option, but more true - to set up camp almost at the very top. We lost on this, perhaps an hour, but as a result is important. I have no doubt that Alex was right! In the beginning, we set the GP to 14 MHz. 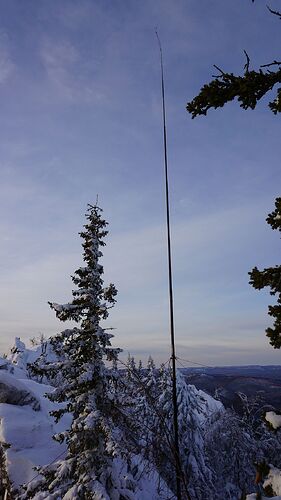 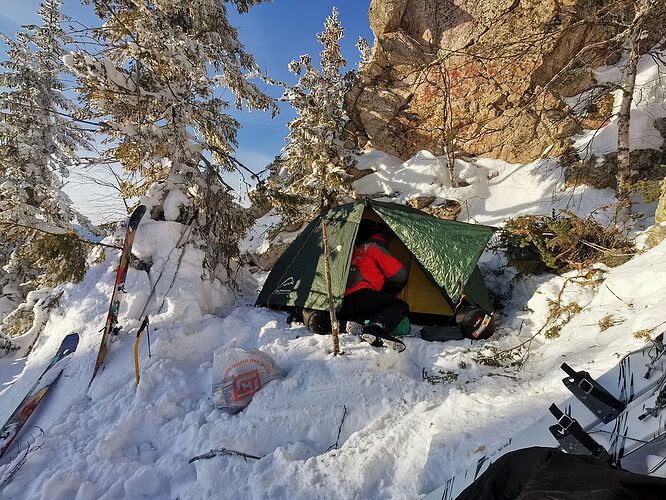 шэк1280×960 388 KB
The tent stood on a “balcony” of snow, close to the rock wall, so that you could sit with your legs dangling. The rock closed the Short Pass for us, but this was a minor loss. But there were no obstacles to the east and west. 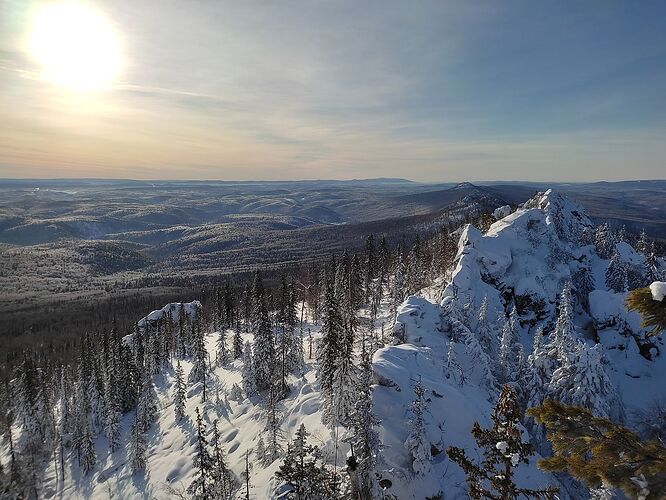 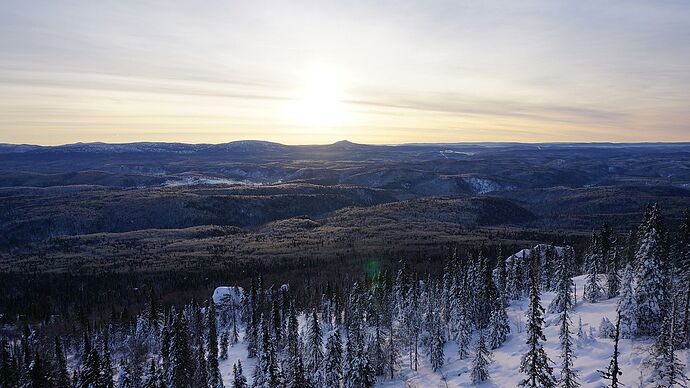 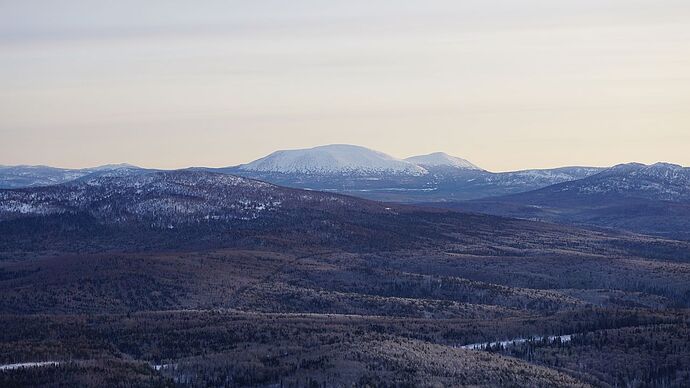 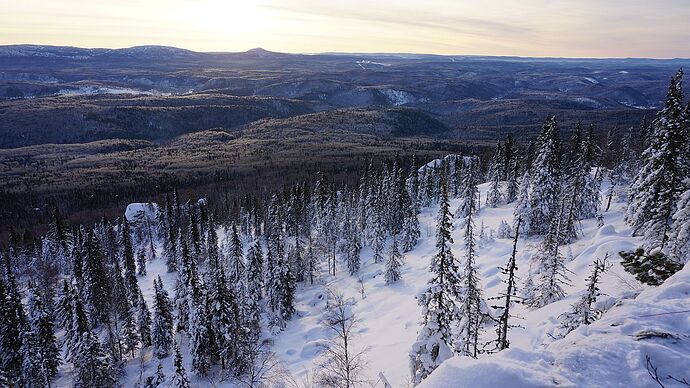 DSC020961280×720 267 KB
When everything was ready, it remained only to connect the battery to the transceiver and insert the antenna connector. 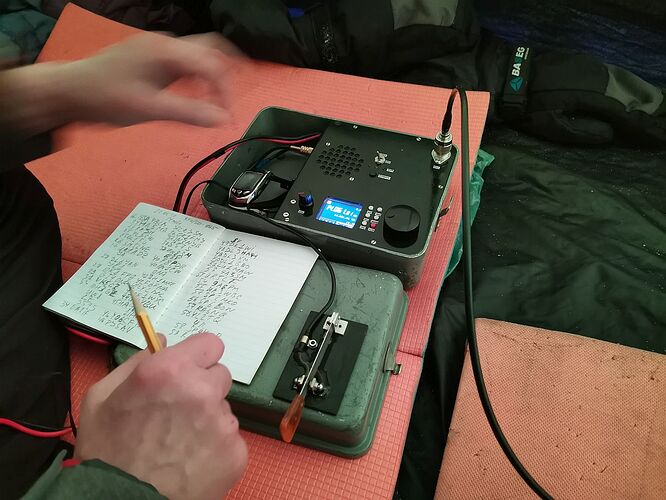 RIG1280×960 178 KB
Despite the frost, the transceiver did not let us down. As usual, the first CQ was answered almost immediately. SA4BLM, loud. I was too lazy to immediately start using the split. Then he regretted it. Surely this would give many more chances to QSO for all chasers. However, in the pileup, was contacts with other continents. At 11.33 there was a QSO with VK5CZ, and a little later, probably on the fifth attempt, a report was received from LU1MAW. It was just amazing! Later QSO with EA2IF, dear Guru, I finally heard you on the air! Our 73 from the snowy Ural mountains for you! 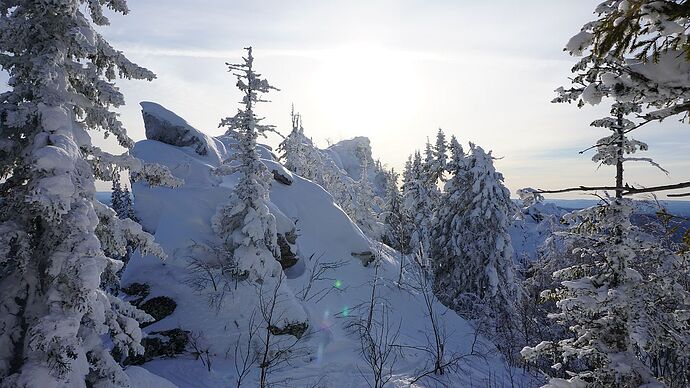 DSC020791280×720 213 KB
I could have been QRV longer yet, but Alex was sitting next to me and waiting for his turn. After about 45 minutes, I took off my headphones, plugged in the mic, and handed it to Alex. Now it was his turn to listen to the pileup. The first QSO - immediately S2S. LB9HI. Probably, my voice could sometimes be heard, since I could not throw my comrade into the sea of ​​signals. And, if possible, helped him. While the transceiver was noisy with the sounds of CW and SSB, our dinner was cooked on a gas burner, hissing and gurgling. 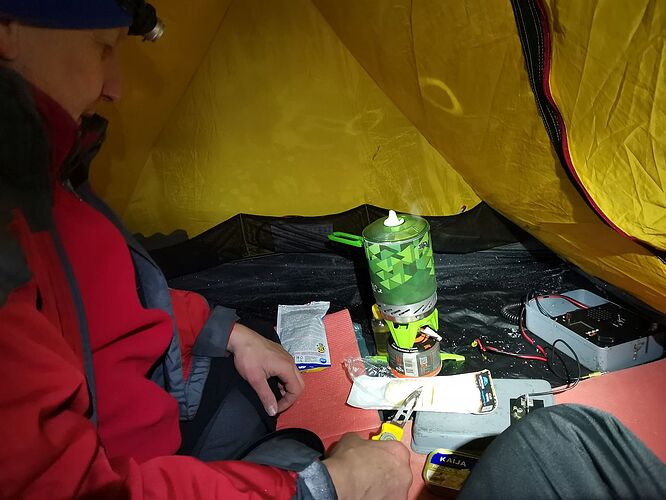 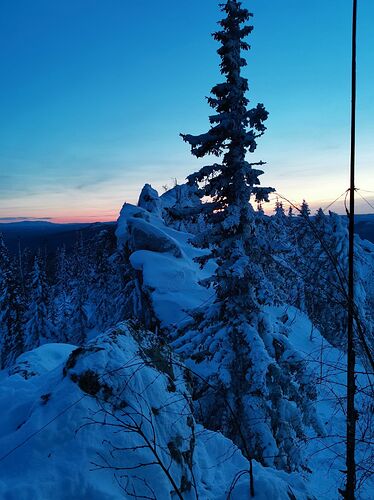 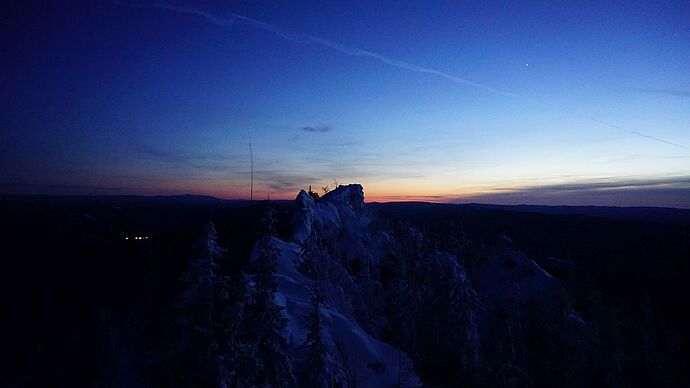 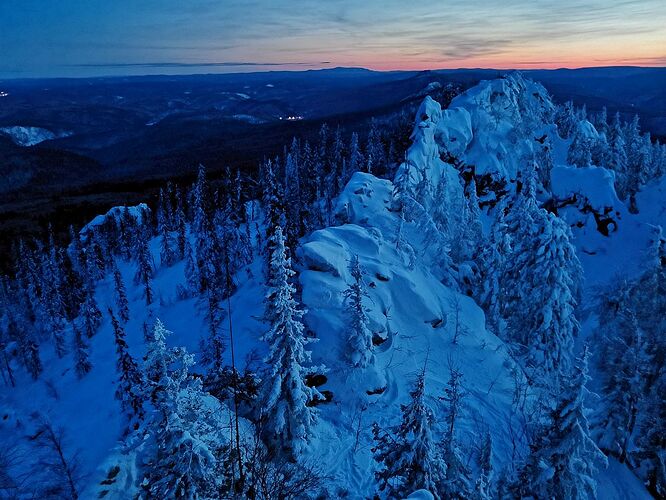 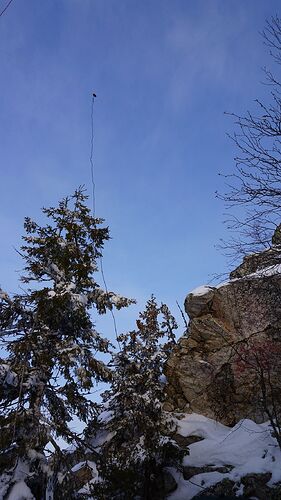 диполь1280×2275 499 KB
In the dark, we not only did not fall off the slippery rocks covered with snow and ice, but also managed to stretch the dipole so that the feeder was right above the tent. I have no comments for this. Climbed into the tent, lit the burner to keep warm, drank some vodka (to keep your hands from shaking) and welcome to 7 MHz!
It was on 7 MHz that I got a QSO with Sergey, R8WB from Ufa. The consequences of COVID made it impossible for Sergey to go for activation with us. But this QSO, I hope, will help you to be ready for outdoor activity both in winter and summer.
At 20:32 local time, R9WGK QSO with OH3GZ completed the activation. In the morning we planned VHF.
We ate, drank tea, and went to bed in downy sleeping bags. 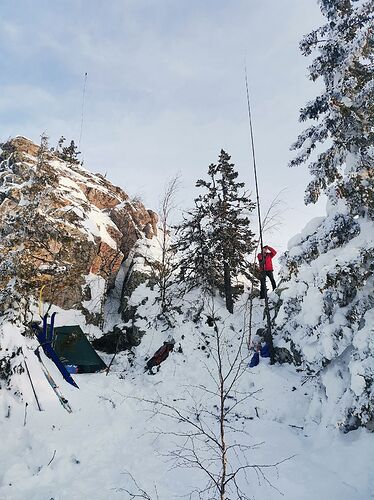 Brilliant expedition and report! I love the camping spot.

Dear Vlad and Alex,
Thanks for another great expedition, activation and report. Spending all that time at the summit at temperatures below -20ºC is something I can’t even imagine. You are supermen to me!
I was delighted with a CW QSO with Vlad and a SSB QSO with Alex. Your pile up was big and it took me quite a hard work to break it through.
I had already chased you twice on 30m in 2020 and once on 20m in 2016 with my broadband folded dipole, but from now on, I think 20m will be our best chance to have a QSO since I recently got my rotator repaired, back into service and I can now control it remotely. In these QSOs, I used my TH5-DX tribander yagi and this definitely makes a huge difference compared to the broadband dipole (or deafpole, as I use to call it…)
Keep up your excelent work from the Urals.

Brilliant report and excellent fotos! I wish I could activate in the Ural mountains one day.

Thanks for the report and pictures. Thanks also to Alex for my first chase into Russia.

Excellent report and views. And it is hard to beat a summit camp in the activation zone. Keep it up with such great SOTA expeditions

Glad to work you Vlad on 14 mhz CW and I agree, the SSB pile up
Alex had was even bigger than your CW pile up. I could hear many familiar call signs calling on CW and SSB from Down Under. Great photos too.
Good work.
Ian vk5cz …

Thank you for the activation and this marvellous pictured report.
Worked your S7 signal here in Vienna on a simple vertical aerial.
Even found my callsign in your picture! 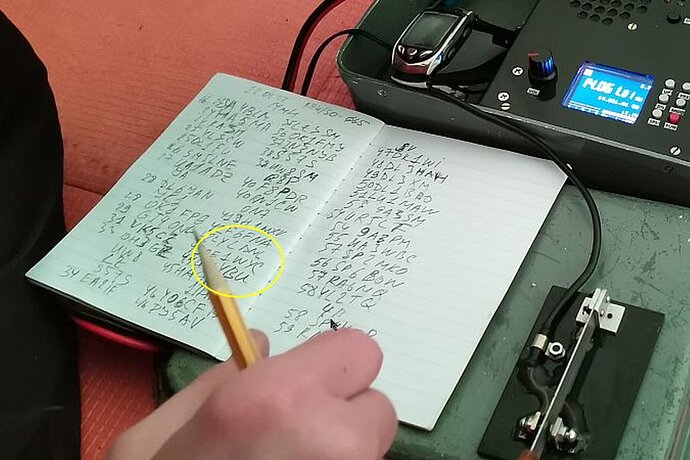 Marvelous trip and report - as always

I will keep in memory how to avoid hand shaking

Waiting for next S2S QSO

We are waiting for a movie about this hike!

It’s a pity I wasn’t there, but I’m still not ready for such hikes.

All I could do was - give a spots for your station.

Thanks for great report and fantastic photos. Well done.

Guru, I was very happy when I heard the suffix …IF in the pileup. I immediately understood that this was your signal! That evening we met twice, when you called us on SSB, the microphone was in my hands… I wish you a recovery and many more activations.
73
Vlad

Ian, it was an amazing meeting on the air. On the eve of the expedition, we met on 21 MHz, I then informed you about the planned activation. I didn’t really hope that there would be a QSO. But a miracle happened!
Thank you very much for your support!
73
Vlad

Hi, Fraser.
Thank you for nice feedback!
It was Alex who came up with the idea of ​​putting up a tent right under a rock, on a steep slope…
It turned out great.
73
Vlad

Hi Heinz!
When the lockdown is over and the borders are truly open, I will be happy to meet in the Urals. There is still a sea of ​​non-activated summits!
73
Vlad

Hi Willy!
Your signal was loud. Perhaps this is also due to the fact that we both had simple vertical antennas )
Thank you.
73
Vlad