USB-C PD power for the KX2

I am not an electrical engineer, so I don’t know whether this was a good idea or not. I’m curious to hear yalls’ thoughts.

Since both weight and space are concerns on longer hiking and camping trips, I abjure the idea of bringing single-purpose batteries. Why should I bring a battery that only powers the KX2? I also need a battery bank to top up my cell phone, so shouldn’t I be able to use that for everything?

I’m not inclined to homebrew a LiFePo4 battery bank–see previous re: not an electrical engineer. Nor am I keen to use a step-up voltage adapter to make a 5V battery bank supply 12V for the KX2 since I’ve heard that can have bad effects on the output RF. I took the easy route and bought a USB-C Power Delivery-capable power bank. PD is a protocol for negotiating power supply between devices, and there are various little boards you can buy that act as configurable terminators for homebrew devices. I don’t like that they’re mostly naked PCBs, and cases for them are hard to come by, and I’m lazy, so instead of using one of those I found a cable that includes a built-in terminator for 12V PD, cut the end off, and soldered on a barrel adapter. As an added bonus, I can power the KX2 from a USB-C PD wall charger when I’m using it in my shack at home… or could, if I had anywhere to put an antenna at home… 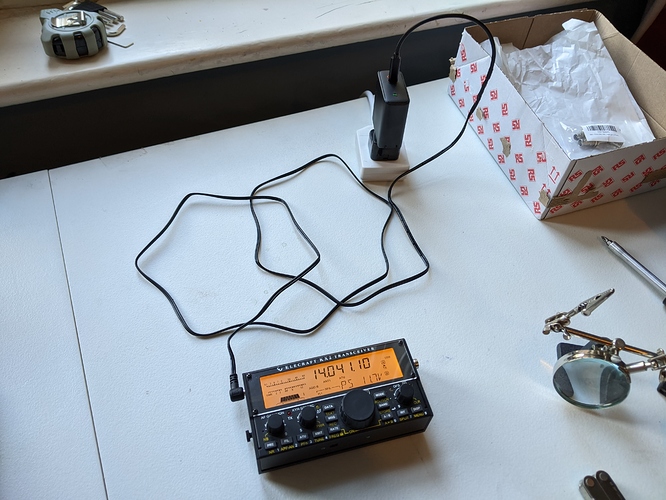 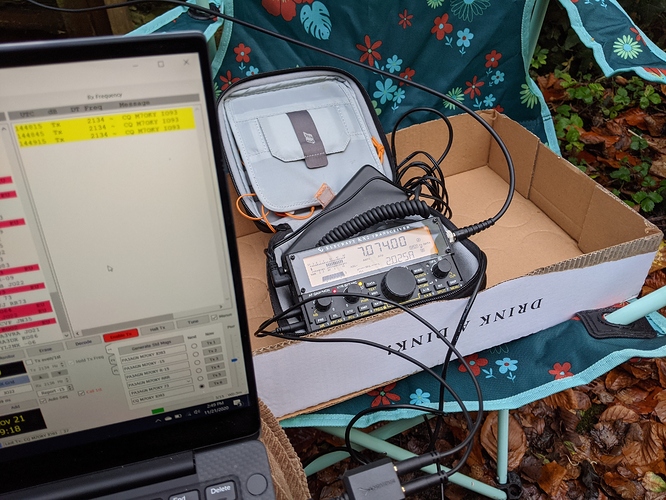 I don’t think there’s any step up/step down conversion involved so it seems safe to me. I’ve made several contacts over FT8 using this arrangement, but given the insane amount of error correction involved with that I doubt I’d notice any negative effects anyway.

I’ve taken my 3S1P 4000mAHr LiPos on many flights over the years and only a very few times have I had problems with airport security, the worst being at Edinburgh. The best way to get through security is not to stand out and so taking something that looks like a slab of C4 explosive with wires emerging from it through security is going to be an invitation for Mr. Fail to come calling. C4 Explosives: [C4_explosives] 3s1p LiPo pack [b-25c-2500-3s1p] I know one day there will be someone who i…

I’m not inclined to homebrew

Time to learn then. Enjoyment gained from using homebrewed equipment greatly exceeds that from using stuff you bought. ISTR the license document says one of the conditions of the licence is self-training in radio communication.

I have a power bank which can be used for jump starting cars. It’s got a 12V output as well as 2 USB ports. There’s also a 19V output for laptops.

Didn’t manage to deplete it yet with my FT-817 even after 5 consecutive activations.

If at some point you decide to go the LIPO route, there are little (smaller than a matchbox) voltage monitor display units (<$10) that connect to the charger lead not the main output lead and have a USB socket on them that can be used to plug your normal phones charger cable into, whether that is a micro-USB or USB-C socket on the phone. 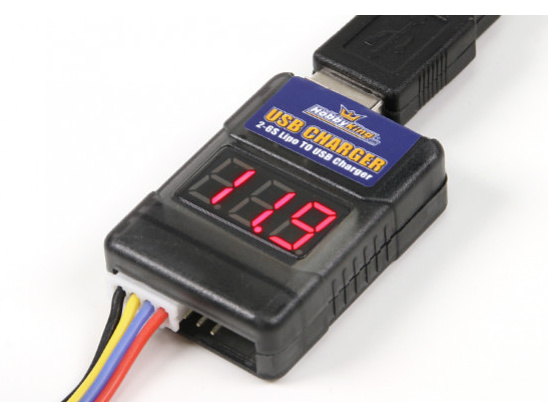 Does the KX2 draw enough to keep the battery bank on? I am using a step up USB cable to power my MTR3B and most battery banks shut down after 30 seconds or so because of this. I finally find a bank with “trickle” mode which stays on and works great with the MTR. Into my 40m monoband EFHW, the noise doesnt sound any different between the step up cable and a 9v battery. But, I am not an expert so your mileage may vary. I wonder if the PD negotiation keeps it from shutting down?

We have had a similar thread here before.

a power bank which can be used for jump starting cars

There is a lot going on in the market. A device like the one Jens suggested is available in German supermarkets (e.g. Aldi) again and again for about 70 Euros. They have a 12V output that delivers 10A. That would be nice for a small PA.

I can’t say whether they switch off on reception due to the low power consumption of the KX2. Does anyone have any experience of this?

I wonder if the PD negotiation keeps it from shutting down?

Exactly right. I’ve used it for an hour straight on RX with only 0.1 amps drawn and it doesn’t shut down.

I can’t say whether they switch off on reception due to the low power consumption of the KX2. Does anyone have any experience of this?

I don’t have a KX2 but just checked my power bank: Without switching anything on, there’s 12V available at the output when I connect a multimeter. So it should be OK with a radio with low current draw on RX.

The 10A in the spec is not really a hard limit: I used the power bank with my FT-891 before I bought my big LiFePo4 pack, and managed to operate the TRX with 100 W for about 15 minutes. With 20 W out, I could get about an hour of operating time.