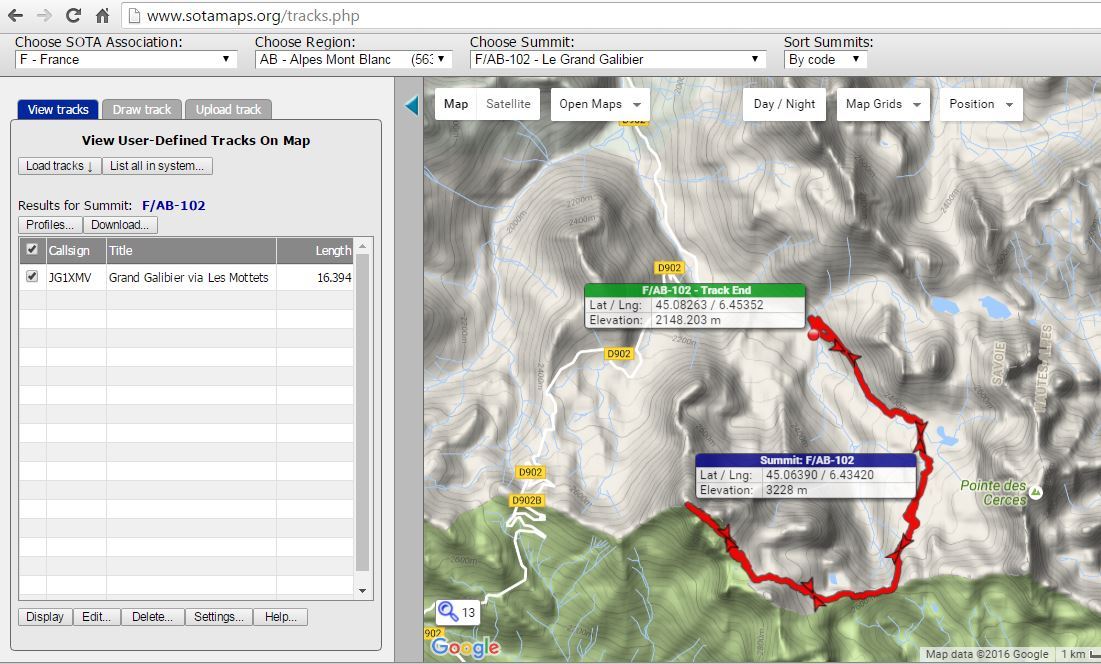 Good work, uploading GPS tracks to Sota is something I would do if I knew how to. Such tracks can be quite handy for others.

The interface to do so on sotamaps.org is fairly easy to use. I recommend people to have a look. You can post your gps track along with comments to help people to get there. I also like the feel of the entire sotamaps.org site from a GUI perspective. It is a very well built and useful tool.

something I would do if I knew how to

uploading a gpx-track to SMP is not too difficult. Just have a look at http://sotamaps.org/about.php and scroll down to “TRACKS MAPPING PAGE”. There are some help-files to find out how to upload tracks.

I uploaded about 100 tracks mostly of OE/OO-Region to SMP. So it is easier for other people to find the right way to the summit. If I need to edit my gpx-track before uploading I use http://www.gps-track-analyse.de/index.html … this one is in German, but I’m sure there is similar software available in english also.

Sometimes, the starting point of a track is even more important than the path details up to the summit: For activators not familiar with the area it is extremely helpful to know how far you’re allowed to drive and where to park your car.

It’s a really great resource. I even point my non-ham friends to the tracks page as a good place to find routes for hiking.

I think Rob prefers that you upload one-way tracks when it’s a straight up-and-down, so typically that means a bit of gpx editing. A nice free editor is Viking. I use this for illustrating trip reports too, with the map set to Open Cycle Map.

If you want to link directly to a summit’s tracks page you can construct a URL like this:

If you want to link directly to a summit’s tracks page you can construct a URL like this:

Maybe in future there will be a permanent link on every summit information page like:

Another nice GPX editor is at http://www.gpstrackeditor.com/

A clever feature of this one is that it can automatically colour sections of the track by various criteria, one of which is speed. If, like me, you record the entire outing in a single track, this makes it much easier to separate the driving from the walking visually.

I think Rob prefers that you upload one-way tracks when it’s a straight up-and-down, so typically that means a bit of gpx editing

I do indeed - although it has to be said that this requirement is not so vitally important these days as it used to be, since the introduction a few months back of a track-points reduction algorithm in the tracks uploading section.

There still remains, however, the stringent requirement that (powered-vehicle-) driving sections in the GPX tracks be removed before uploading tracks. I’ve not looked at any uploaded tracks for a few months now, having been busy with one thing or another, and was this very evening astonished to find 16 tracks from one particular author with track lengths of 50, 60, 120, up to 174 km, and in all with a total of over 830 km length! These I have edited down to a mere 32 km in total, representing just the hiking sections: the author has been duly notified, and requested to adhere to the requirements as set out in the “Upload tracks” help section (there is a “Help” button thoughtfully provided for the purpose of viewing said help section

I also like the feel of the entire sotamaps.org site from a GUI perspective. It is a very well built and useful tool.

How very kind of you to say so - it’s one of my abiding pleasures to try to provide users with easy-to-use interfaces which are also easy on the eye. It’s not always the easiest thing to achieve, though, so it’s particularly pleasing to receive such compliments.

Thanks everybody for their comments and will have a go at loading in a few tracks.

Thanks for the tip Simon.

I did not know you could post a link in the summit page. I’ll look into that, cheers.

It is great to know who is behind this wonderful tool, many thanks to you Rob. You can give yourself one big pat on the back for that one! Cheers, Arnaud.

I tried to do this today but I do not seem to be able to logon to the page with my SOTA pw. I am not sure why.

you cannot use your password from SOTAwatch … you need to register here:

If you’re good at looking at a map and remembering where you walked, SOTAmaps also lets you manually draw a track as well. I manually drew my track for W4V/WV-001 (Mount Rogers), but the trail is easy to see from the satellite view. When hiking, though, you have to be sure to stay on the correct trail and not wander off along one of the many intersecting trails.

Drawing a track may not always be 100%, but it still lets people know about good parking locations, and view the elevation profile of the ascent.

Yes, Jon from the support team told me the same, I was a bit confused, thanks.

Yes, I saw that was feasible as well, I still prefer the download from the GPS itself as human error is always possible if you draw manually. If you make a small mistake in what you draw and unwillingly take people over difficult terrain things could become a bit tricky in case of an accident. The odds of that happening should be low but you never know… Maybe people should be made aware whether a track was drawn manually or is an actual track download and the implications of a manual track to make sure the person who drew it is not liable in case of problems.

It’s well known that GPS devices vary in their overall accuracy, with GPS-enabled smartphones usually bottom of the list, with dedicated GPS devices being generally better to much better. In the mountains, all of these devices suffer to some degree from satellite signals being reflected off mountain-sides and there may be other problems of which I’m not aware. I’m sure regular users of these devices, or those with more knowledge of the subject, could add their own contributions to this topic (which has been already been covered on this Reflector).

The inherent lack of “perfect accuracy” in GPS-device derived data means that not even these data can be relied on 100%, and neither should they. Anybody venturing into mountainous areas should research the route in advance, be skilled/trained/experienced enough to be able to navigate those areas using a variety of sources of information, from the shiny new GPS device (charged that battery?), to map and compass (don’t get the compass anywhere near a strong magnetic field!), to keeping to a trail and/or using dead reckoning, all seasoned with a good helping of common sense; AND they should be sensible enough to retreat in good time if they encounter difficulties in finding their way.

To rely just on what a little glowing screen tells you to do, or where to go, - and ONLY that - is surely the height of stupidity, and anybody doing so is likely sooner or later to end up in difficulties or even worse.

it IS possible to see this in the “List all in system” listing, but not (yet) in the left-hand listing of tracks for a particular summit. I will make sure that this listing also makes clear the origin of such tracks, as well as put a note in any downloaded GPX tracks headers.

…and the implications of a manual track to make sure the person who drew it is not liable in case of problems.

The person who created a manually-drawn GPS track, whether using the tools in the SMP or not, surely cannot be held responsible for the actions of a person relying TOTALLY on said track in their GPS device to guide them to their destination. As stated above, those heading into the hills should make sure of the route BEFORE they set out, take more than one means of navigation, and - if the going gets too tough or they find themselves off-route, they should retreat and try again another day.

For an activator to blame somebody else for their getting into difficulties on the hill is to offload their own responsibility for their own safety to some other person - a symptom of the sorry times we live in, if ever there was one. That’s my personal $0.02, for what it’s worth…

Now, here’s a quote from the Help dialog in the tracks page (cunningly hidden behind the button labelled “Help”):

Disclaimer
Be aware that any tracks or routes which you, or others, have drawn, defined, or uploaded to this system are to be used for informational purposes ONLY and should NOT be used as primary navigational aids on the hill or mountain for which they were made, or indeed anywhere.
Neither SOTA, nor the SOTA Mapping Project (SMP), claim any responsibility for accidents or mishaps arising from the use, or misuse of data contained in, or obtained from, this website.

which, it has to be admitted, has not been written by a lawyer. Should I consider hiring one to save myself from penury in case some idiot goes off-track on a hill somewhere and decides to sue ME for everything I’ve got (which ain’t a lot, folks) because he put all his trust and faith in a track downloaded from a site I run? I would plead insanity, it’s got me off the hook before now…