There is a 2 pointer Summit at about 20Km from my QTH which I had never climbed and I had it in my mind as to be climbed one day with the family because it seemed to be an easy one.
The weather forecast said we would have a rainy weekend and so it was this morning, but the afternoon didn’t look as it was going to pour some rain in the short term.
Given that my wife left with our 10 year old daughter, Lucía, to do some shopping and I was with my 12 year old daughter and my 5 year old son, I proposed them to join me for a walk in a small mountain where they would be allowed to make as many pictures as they wanted. I told them “until the end of the camera battery”. They accepted and I quickly raised an Alert on Sotawatch before leaving home.
It was a bit too late and I thought we may had to descend with little sunlight, so I planned to take my forehead tourch. Yes, so I planned but I finally forgot it…

Well, we got to the small village of Untzue passed it through and parked after having approached the base of the mountain by driving on a dirt road first and a track later as you can see in the following picture.
This picture was taken when we had just started to walk. You can see our target behind us. 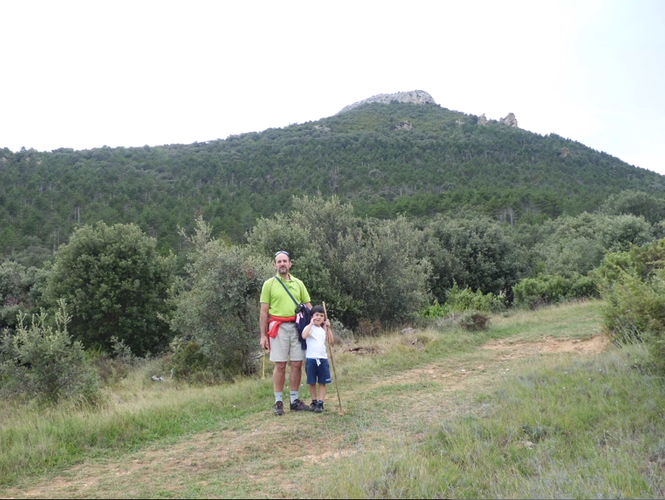 This is another moment during the ascent: 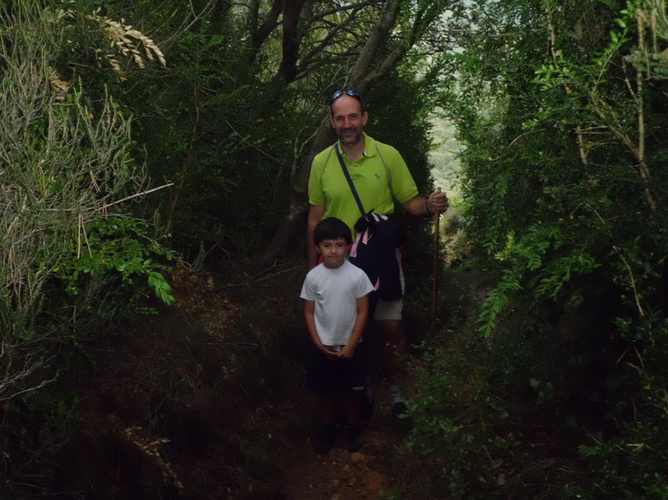 This mountain is called Peña del abrigo. Abrigo can be translated into English as COAT, but ABRIGO is also SHELTER and I guess this house you can see in the following picture, which is on top of a secondary summit, is or was used as a shelter by the shephers for themselves or the animals during cold winter nights or heavy rain. 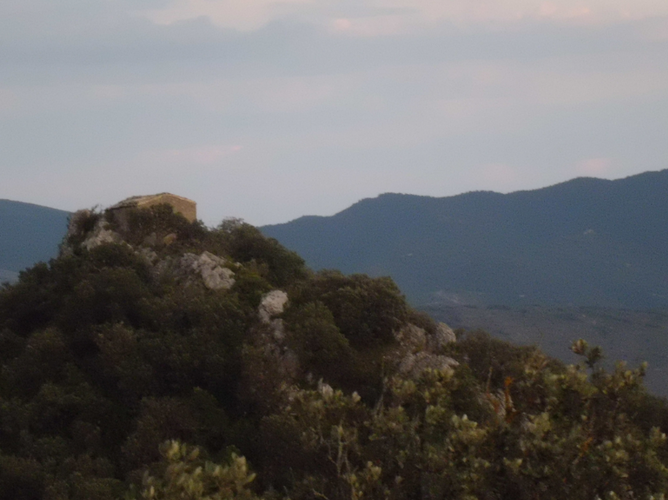 In this picture I’m helping my little son Juan to hike this steep part. 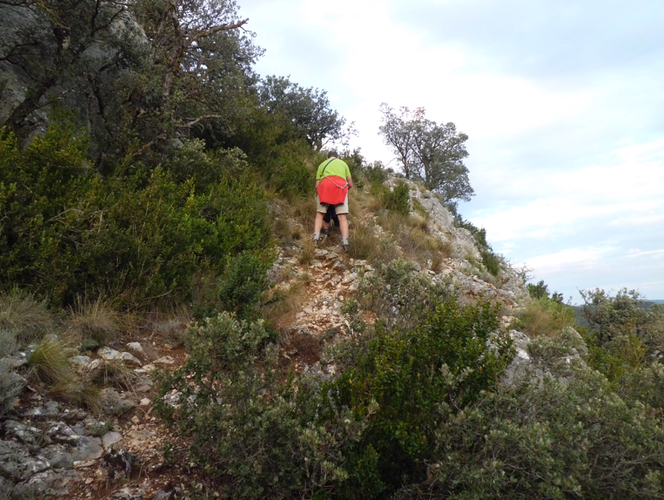 Here we were almost near the Summit and the views were great:. 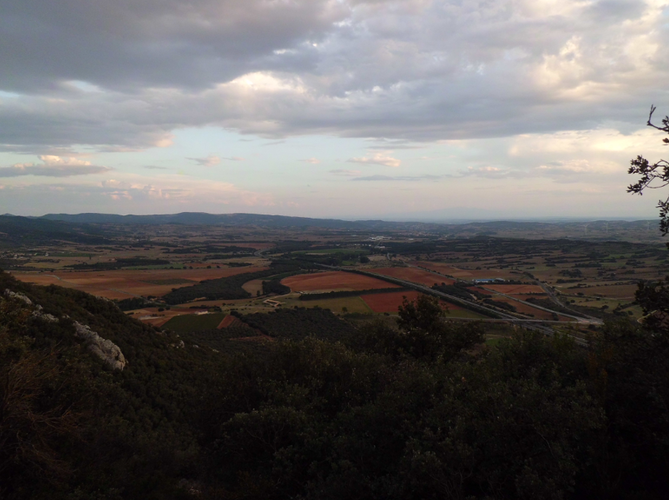 We’ve been pleased with a beautiful sunset: 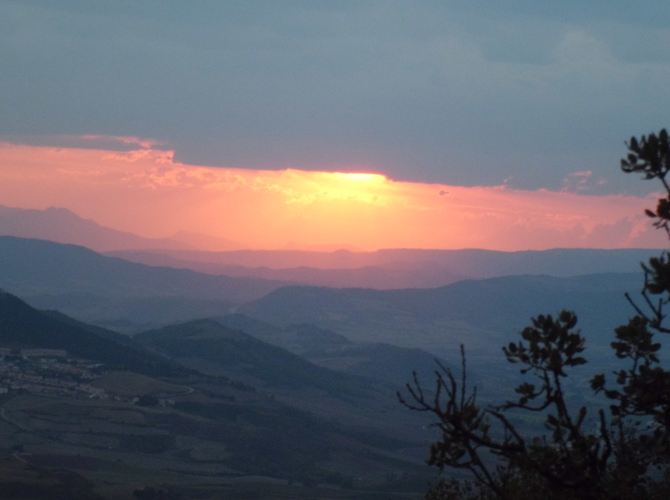 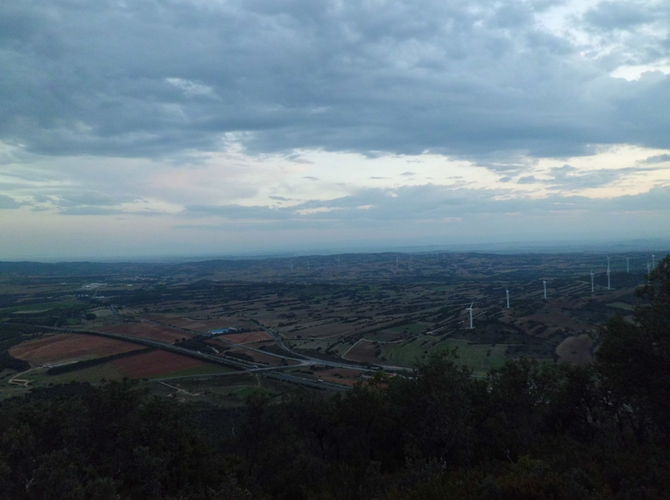 Once in the Summit I started CQing on 2m FM and Santi EA2BSB quickly replayed. This QSO gave us both a Complete for this Summit. Juan seemed to be happy about this: 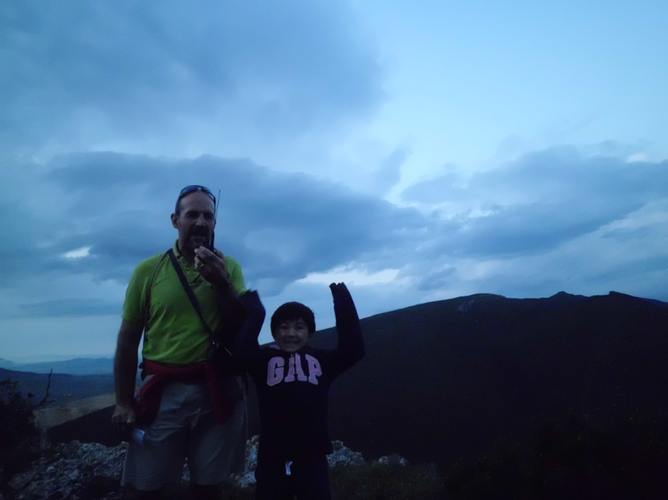 After the first QSO I called and called but nobody else answered, even after telling on one of the local repeaters that I was activating for SOTA and I was in need of 3 more contacts to qualify. Look at Juan’s face looking like highly surprised with the lack of chasers. 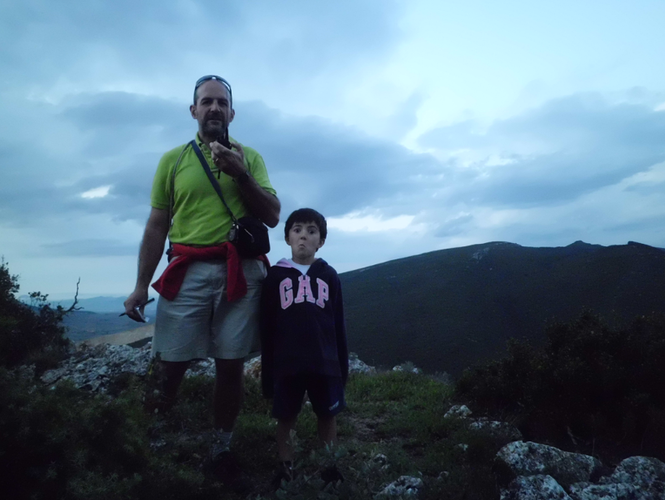 Finally I decided to give up because it was getting late and we may had to descend in the dark, so I announced the end of the activation and took this picture of my daughter Eva and our dog Lucho. 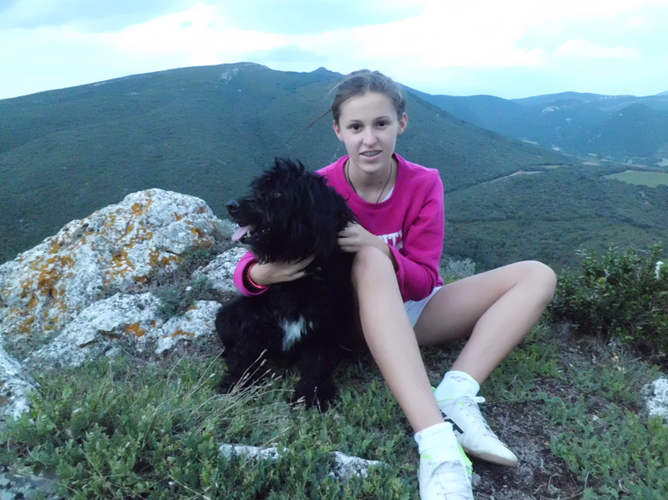 One more view before we started to descend with little light. 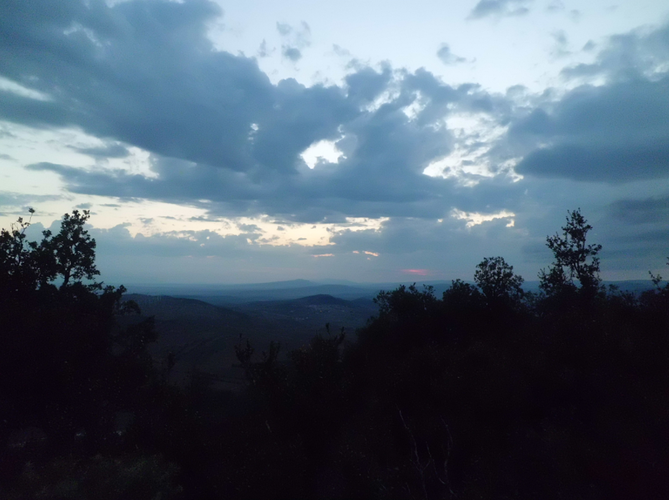 It was almost completely dark when we got to the car but everything went well, the kids had a good time in the mountain and so I did, despite not having been able to collect the mínimum 4 QSOs to qualify this Summit, which is not too bad because now I have the perfect excuse to get back there and next time I’ll do it with my HF gear ;-).

After last September 12th unsuccessful activation of Peña del Abrigo, with not enough contacts to qualify and get the points, I decided to get back there today and complete de job.

Weather was very overcast with some little rain pouring when I left home. However, I took my HF gear, as I promissed in my previous activation report, along with my dual band 2m/70cm Baofeng Handheld and headed to the summit in company of my dog Lucho.

The hike was under light rain all time but I took an umbrella with me and I managed to get to the summit quite dry. There was quite a strong wind at the summit and I quickly tied my 7m telescopic fishing pole to a small but robust enough tree. When I was extending the wire radials on ground, I slipped on a big, flat and wet stone and I fell down to my right side. On the reflect action, my right hand extended towards the ground as to protect my body from impacting the stony surface of the summit and so it did, but, unfortunately my right hand “anular” finger (I don’t know its name in English) got bad and painfully bent. I feared that it may have got broken but I could more or less articulate it with pain and given that I was almost ready to start my activation, I decided to finish setting up and start calling on 2m FM.

I sat on a rock with my rucksack between my legs and the umbrella covering as much as it could of myself and the rigs, given that the wind was constantly moving the umbrella from right to left and reversing it as it was a parabollic antenna. This is the way my umbrella was most of the time during the activation, so, perhaps I should have tried microwaves

First chaser on 2m FM was Santi EA2BSB, exactly as it happened in my last September 12th activation. I loughed out loud and told Santi that this was a “dejà vu” for me and I was in hope that he wouldn’t be the only contact of the day, as it happened to me on September 12th activation of this same summit. But I had brought my HF gear so the single contact shouldn’t happen again today. No more chasers showed up on 2m FM, so I selfspotted and started CQing on 20m SSB, where I had a run of 11 chasers one of which was a S2S with DG7ACF/P at DM/NS-121.

Then I QSYed to 30m and as soon as I changed band on my FT-817, I found Mikel EA2CW/P calling CQ SOTA from EA2/NV-050. Without having tuned properly my AT, I did it by ear and gave Mikel a call on 500mW. He quickly picked me up and we completed our QSO. After Mikel, it was Marcial EA2WX/P who chased me from that same summit for another S2S contact, as he was there with Mikel.

After these two S2S QSOs with Mikel and Marcial, I QSYed a few Kc up and selfspotted on 10.120, which produced a run 8 more QSOs.
Unfortunately PA7ZEE called me 2 or 3 times, I sent signal report to him a couple of times but he never came back to me, so NIL (I’m sorry).

By 10h25 utc the light rain was persistantly pouring so I was a bit fed up with it, plus the wind and my difficulties to hold the umbrella in place together with the notebook, the paddle and trying to prevent the rain from entering to the front pannel of my rigs, so I switched off my FT-817 and QSYed back to 2m FM, where I had QSO with Ignacio EA2BD, Javi EB2AOC, also S2S from EA2/NV-050 where Mikel and Marcial were, and finally my old friend Jorge EA2LU.
Here you can see the complete log of today’s activation. Mission accomplished! 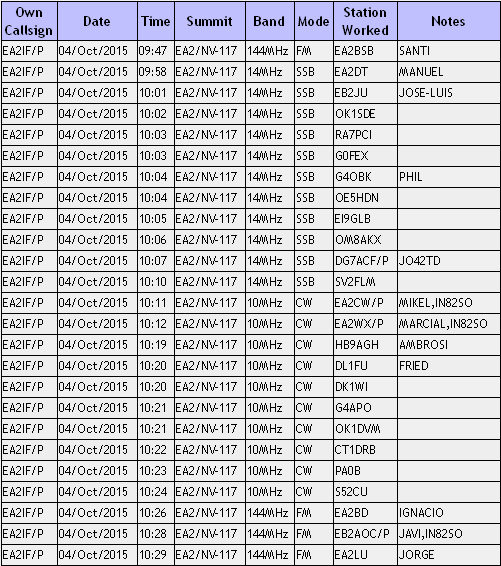 Despite the rain, the wind, the unpleasant stay at the summit and the bent finger in my right hand, I enjoyed again in the mountain and was very pleased to give you, dear chasers, the 2 points of this nice little mountain.
I’ll see how my finger is tomorrow morning. For the moment it’s just a bit swollen but I can articulate it quite OK without pain except for the last few mm before closing completely mi fist and the last few mm before opening it and fully extending my fingers. Nothing too serious I guess. I can even type with it while writing this report.
Have a good week and I’ll be looking forward to hearing you soon again from another summit.
73 de Guru

Well done Guru. At least your first “activation” was a nice walk with your family. Sorry about your finger (ring finger I think in English), hope it’s not broken.

Yes, ring finger, thank you for reminding me.
73, Guru