Yesterday was a bit of an intense day, with an early start to go to the Southport Airshow. We’ve been to Southport Airshow a couple of times and the traffic management always seems to be very poor. We expected the traffic management to be no better this time, so we elected to leave home early. Thankfully our planning worked well for us and we were near the front of the queue to get on to the beach with negligible stress. The Red Arrows closed the show on Saturday, their display starting at around 4pm local. Rather than join the queues to leave the venue, we had a wander around the display stands until the traffic got a bit quieter. Our plan once again worked to perfection and Google maps even diverted us around a bit of congestion meaning that our journey home was painless. 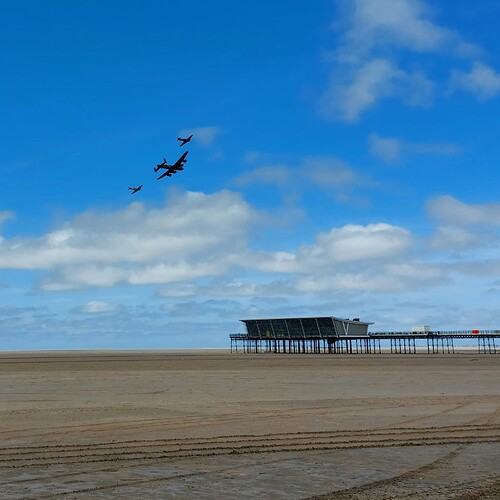 Our long day yesterday meant that today we would be taking it easy.

I thought that as the weather was nice, it would be fun to do some SOTA from a local hill. My son wanted to join me for the fresh air and exercise. White Hill, G/SP-006 is not so far from my QTH and not activated as often as some other local summits.

I hadn’t used my beloved MTR-5B for quite some time, and I felt like it would nice to use it today. The MTR-5B is like an old pair of slippers, I feel comfortable with it. I had no particular agenda today, although I was conscious that it was an exceedingly sunny day and I didn’t want to let my son get too bored waiting for his old man to finish with the beeps!

I decided to skip 40m and 30m and opted to start on 20m. I had a nice stream of callers on 20m and S2S contacts with HB9EVF/P on HB/BE-087 and HB9AFI/P on HB/FR-027. I relish transatlantic QSOs, so I was hoping to work someone in NA. The contacts on 20m dried up, so I thought I would try 17m, again in the hope for a transatlantic QSO. It was great to be called by Ignacio EA2BD on 17m and his signal was good too. Tom M1EYP/P called me and after some initial confusion, we had a solid intra-SP region S2S; G/SP-006 to G/SP-015. After 7 QSOs, the band went quiet again. Sadly there were no NA callers again - where are they all? Has the pull of POTA become too great?

I’d been on air for around 40 minutes, but I felt like I could cheekily sneak in a few minutes on 15m before packing up. After a few CQs, I was called by SM4CJM and we completed a simple QSO. I was then called by an unfamiliar callsign and I had to ask for a couple of repeats, sure enough, I copied the call sign consistently as 7N1FRE. I knew that a call sign starting with 7N was exotic, but I couldn’t exactly bring to mind where it could be. The QSO needed some repeat exchanges, but we managed in the end. Immediately I googled the call sign and found out that I had worked Kaz, 7N1FRE on Honshu, Japan! I sent out one more CQ and heard nothing so went QRT - I didn’t think there was any point calling anymore - nothing could top working a station in Japan with my home built QRP rig!

Another great day on the radio, glorious sunshine and 25 QSOs in the log. 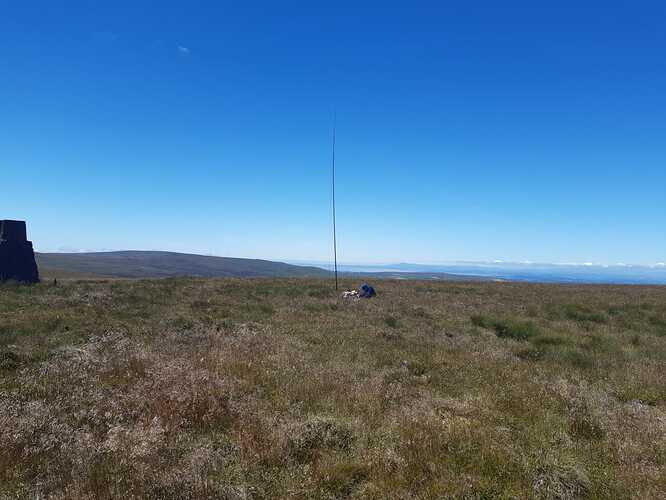 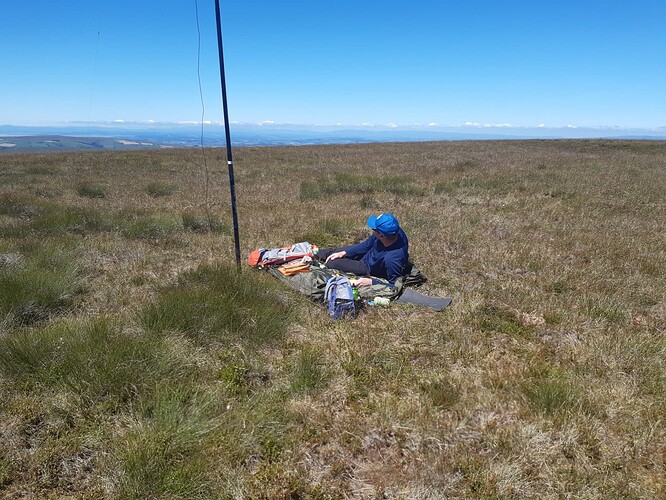 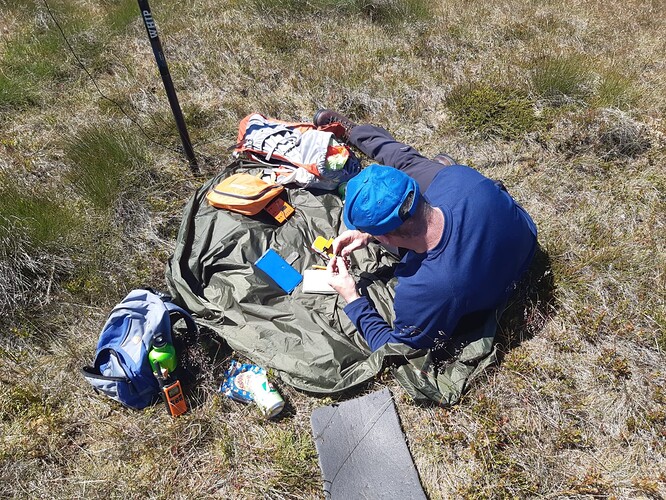 Photos by my son.

My first ever Trans-Atlantic CW QSO was on 15m last year and I regularly return to it.

The 15m FT8 map from last week is shown below from when I was having a play. This was with 100W but from a poor location. 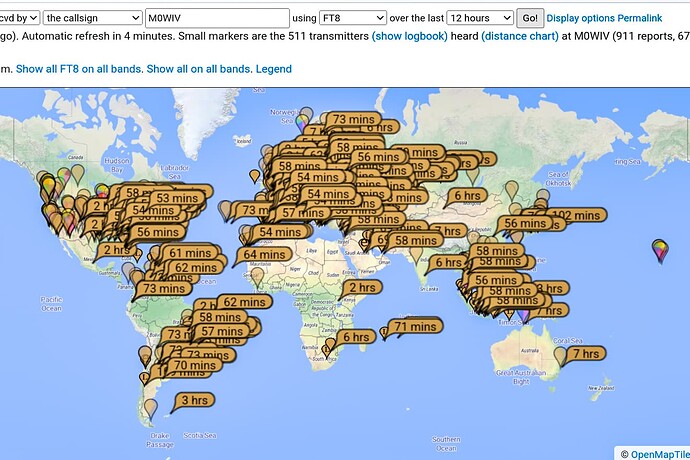 Top notch DX that @M1BUU - multiplied by it being QRP.
Great achievement, Mark.

Well done Colin, a great achievement. It’s many years since I worked into Japan, so I’m looking forward to the forthcoming improvements in propagation as the sunspot cycle progresses.

Sure that’s White Hill Colin, you don’t appear to be up to your knees in quaking bog

I went earlier in the year and there were a couple of soft spots but it was pretty much a dry walk to the summit.

I had an interesting experience a couple of days ago which showed how short some of these openings can be. Playing with FT8 I found 17m was better than 15m and after calling CQ I had QSOs with two operators in Japan. Looking at the PSK map I was being heard by several stations in Japan but after a few minutes it all went silent and nothing was showing on the map. It might have been open for no more than 15 minutes.

It’s also fascinating to see how localised reception can be. For example a tight cluster in Brazil or South Africa but outside them nothing.

When I did it in March 2009 with Gerald G4OIG it was lashing down with rain, there was 3" of standing water on the summit and the whole lot was a squidgy mess

Maybe I wasn’t, however the same can’t be said for my son!

Hello Colin ,
What kind of antenna have used on your mutiband activation?
I see a vertical wire and a tuner with ground radials? Or seperate tuned antennas for every band?

I use a home made linked dipole, very similar to a SOTAbeams BandHopper. No tuner used.

The antenna links are made with 2mm gold plated banana plugs/sockets. The antenna was made to work with my MTR-5B on 40 to 15m. I used a NanoVNA to tune each link.

there may be an explaination for your unexpected DX from G/SP-006. Your report rang a bell with me.
I had such observations numerous times, especially in WSPR with 2 min. long signal durations. But you can also have it in FT8, SNR of +64 dB being the maximum on 6 m to YL temporarily.

I looked at the data of your QSO with 7N1FRE and then studied Flightradar24. Flight UA949 from LHR (London) to SFO (San Francisco) was pretty close to you at 34,000 ft altitude being a nice reflector
of your TX and RX signals. Speed was 475 kts heading North West. A Boeing B777-224(ER).

In addition there were two additional flights in the North East (not such close but close) WS23 (LGW to YVR), and AF338 from CDG to SEA. More detailed study would consume extra time.

I had such observations with the ISS approaching, airships and numerous aircraft. You can even plan on
DX by means of those artificial reflectors. This also explains silence before and after the events.
Enjoy SOTA (with and without aircraft in the vicinity, hi)

I had such observations with the ISS approaching, airships and numerous aircraft. You can even plan on
DX by means of those artificial reflectors. This also explains silence before and after the events.
Enjoy SOTA (with and without aircraft in the vicinity, hi)

That would indeed be a lucky coincidence.

Would the cause you suspected also happen to apply to the 7 below listed QSOs from Bruno@HB9CBR with Hideo@JH1MXV?

I can only track 5 days back in FR24 and paying no charge to FR24! What is the grid locator of HB9CBR?

Ok, I understand, then let’s leave it. Thank you.

What is striking about the QSOs between HB9CBR and JH1MXV is the very narrow time span. This could be explainable both with your observations and with JH1MXV’s evening habits, hi.

Yes, for a detailed analysis the grid locators of both SOTA stations are required as well as the exact timing
and the limit is 5 days into the past at FR24 at no extra charge to be paid. You can test it yourself at FR24 as well as flightaware.com and other websites. Enjoy SOTA!

I have a full account with FR24 (as I upload to them as well as Flightaware) if that’s any help?