I beginning to think my back is nearly fixed. I was planning to go up to near Dalwhinnie partly to check on the snow left on the big hills and partly to bag a unique or two. Dalwhinnie is a 220mile round trip so I find it difficult to drive that far for a quick walk. I did have 4 targets outlined, 3 around 1hr walk each and one 1hr30 but the issue was the WX. It was meant to get better later but wasn’t going to be brilliant to begin with. A long way to drive for less than brilliant weather when the forcast nearer to home was for brilliant sunshine most of the day. In the end I decided to try Turner Cleuch Law again and Cacra Hill. It’s 10months since I was on Turner Cleuch but 7 years since I did Cacra Hill.

It was very misty when I left home, late, as I was a bit slow getting moving but by the time I reached the next valley there was no mist and patched of blue sky. Result! I also forgot the way to the hill and ended up driving the wrong way for a bit meaning I turned up 30mins later than expected.

The route up Turner Cleuch was the same as last time, park at Berrybush farm entrance then along the forest road and up the firebreak. The first time I did this it was easy in the firebreak. That last time it was a nightmare as the firebreak was been grown over. It made me think that if I was ever planing a route that involved firebreaks and I didn’t know it was feasible from personal recommendation then I could get stuck. I bought a cheap folding pruning saw from eBay for £4.50 to carry on obscure firebreaks. Yesterday it was put into use, the pruning adding about 20mins to the climbing time. You can get now climb up this route easily. Best £4.50 I’ve spent in a long time.

At the summit it was a cracking day, great views across a seriously empty bit of Scotland which is surprising as there are some big towns and cities not that far away. This was the first time I’d been here on a peach of day except someone forgot to turn the ionosphere on. Conditions were rubbish. I managed 9 QSOs on 30/20m in 35mins. All was not lost. Last time here I noted the absence of mobile phone signals so I had the satellite spotter with me. I’d bought credit for the expected trip to Harris and Scarp so it seems a shame not to use it. It worked brilliantly after I remembered to plug in both ends of the USB cable. I packed up tooks some photos and scampered back to the car.

The view across to The Wiss GM/SS-122 (near hill) and Broad Law GM/SS-029. The snow on Broad Law is from a cold snap we had last week. 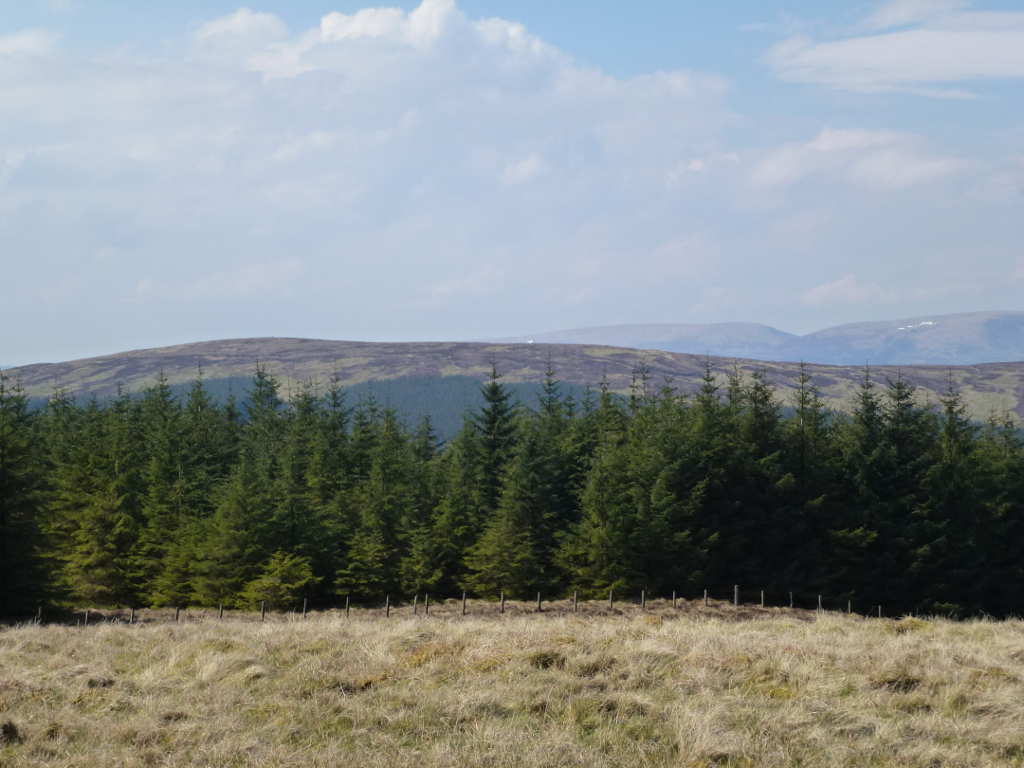 Edinburgh is about 55km in this direction. It shows how empty this part of Scotland is and explains the lack of any mobile phone signals. 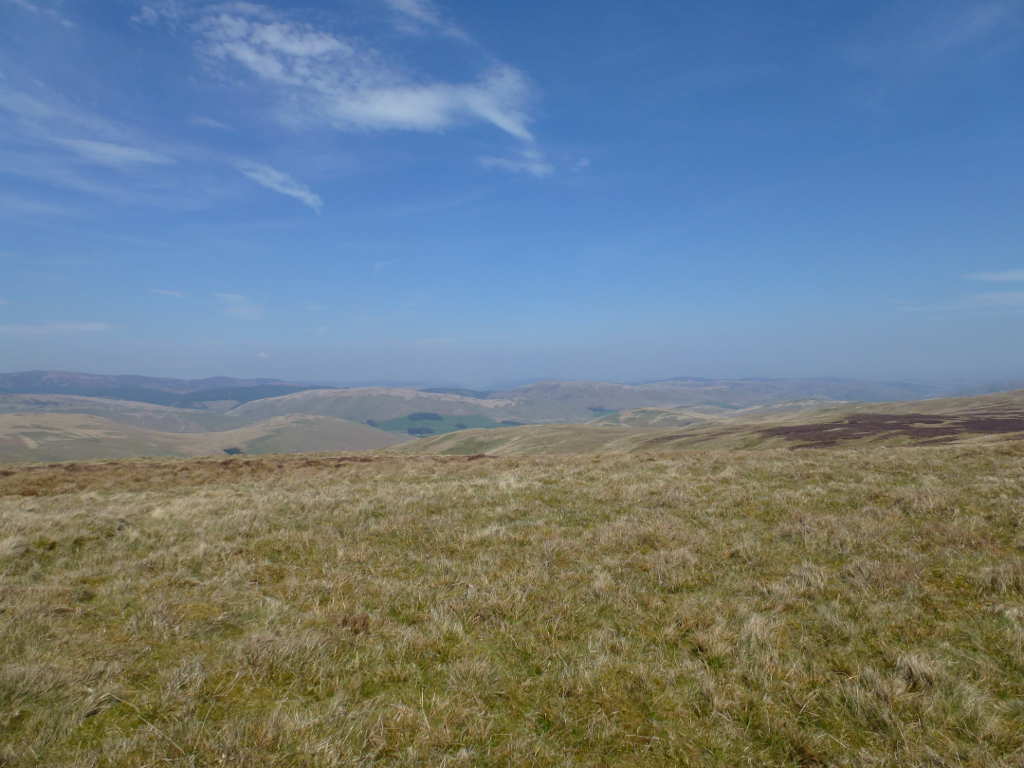 A view from the end of the track. When I first climbed this way, the firebreak was obvious. Now it’s obscure unless you look for it. It’s to the right of the middle of the picture. Note the colour of the sky. If only you could bottle this for use on grey days! 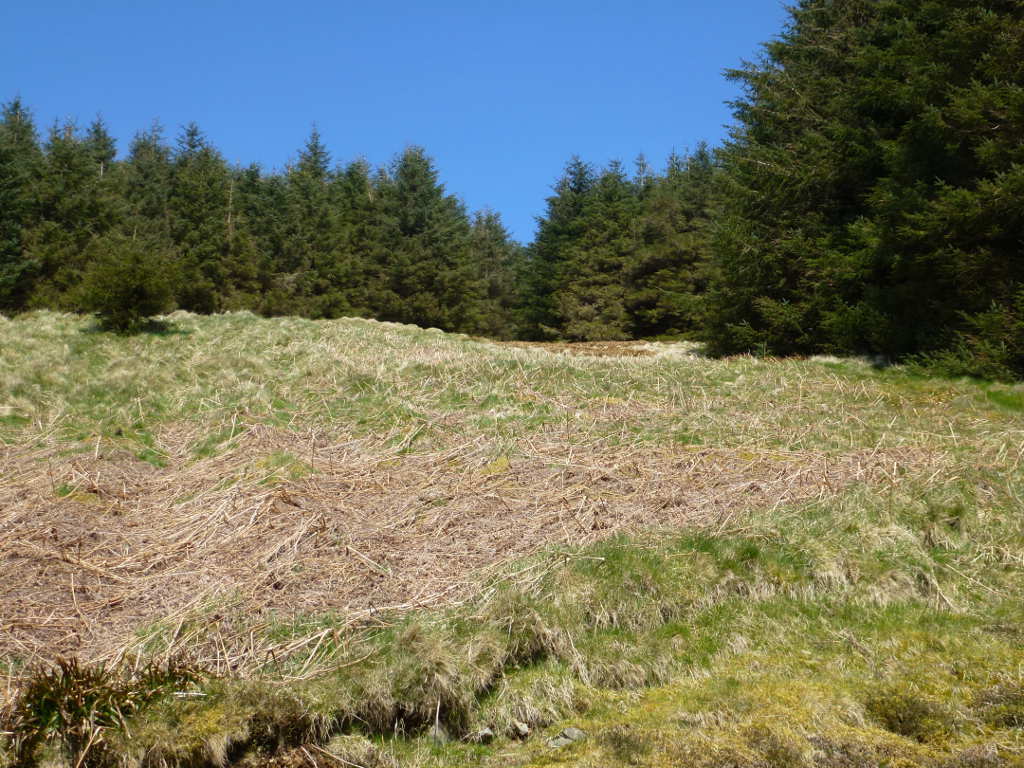 It’s about 5km by car to Cacra Hill. Normally these roads are quiet but the nice weather brought the “organ donors” out in force. I haven’t seen so many big motor bikes blasting about for a long time. At the parking place there was a sign by the gate saying “Cows in calf, please do not enter.” Now cows with calves can be dangerous but pregnant cows? There is a history of GOMLism in this part of the world and the hill is used by para-gliders so I tactfully ignored it and kept a look out for cattle. I also kept near the fence so I could beat a hasty retreat should I see farmers or angry cows. I did see the cows, they were eating. They looked at me and kept eating. I was visible to the cows for about 5mins max before I was up the next ridge.

At the top I decided HF was bad how much worse could LF be. Satellite spotter on, 60m here we come. 5 worked but the skip was odd. I worked G1YFF in East Anglia (long skip for 1500Z in May on 60m) then LA9IAA which was surprising then a few G stations. Steve GW4BKG appeared out of the QSB a few times but we never completed.

The satellite spotter. The item on the “massive” cairn is the satellite modem which connects to a Raspberry Pi via USB. The Pi is in the other box with a red elastic band to keep the SDcard from falling out in the rucksack. The other item is a 3x 18650 LiOn pack for power. There’s a high efficiency switching PSU in the Pi Case to take the 10-12.6V down to 5V. 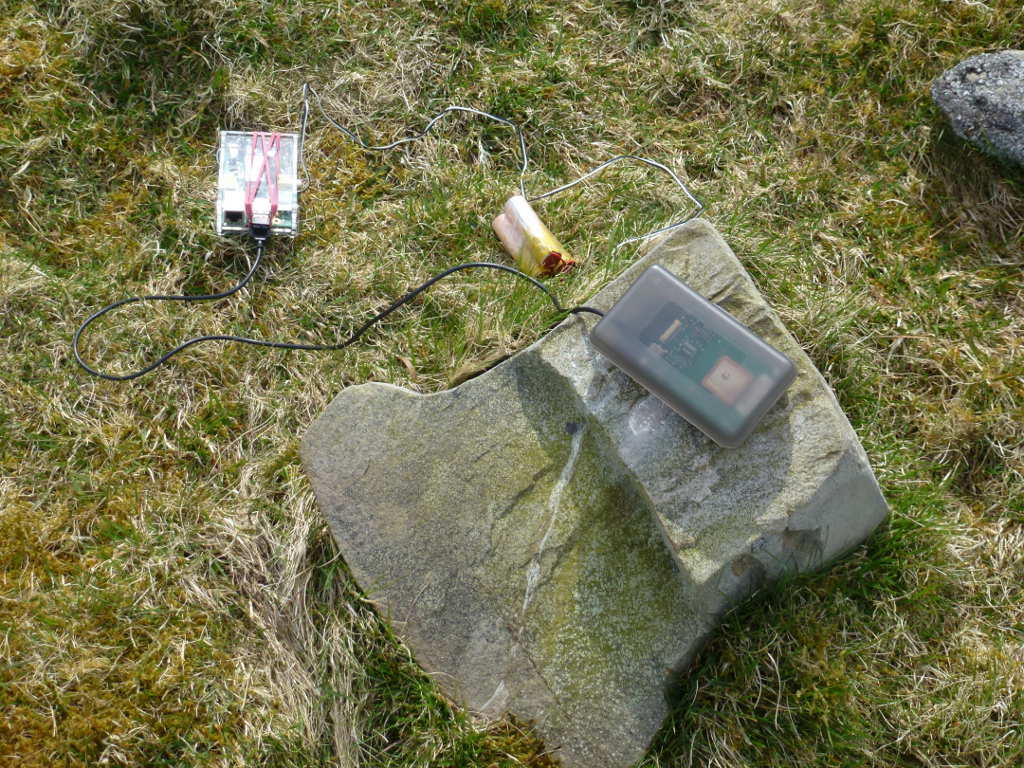 After 60 I tried 40m CW. Not a single G worked. EA2, DK, HB9, ON, SM, LA, SP, F but no G’s. The QSB was epic. SIgnals from EA2DT were 599 to gone to back in the time it takes to send “GA Andy RST 339”. The sun was hot but the wind got stronger and stronger. In the end it was roaring and I had a job stopping everything blowing away. 5 CQ calls went unanswered so I pulled the plug and high tailed it down. I went a different way to avoid the cattle completely. 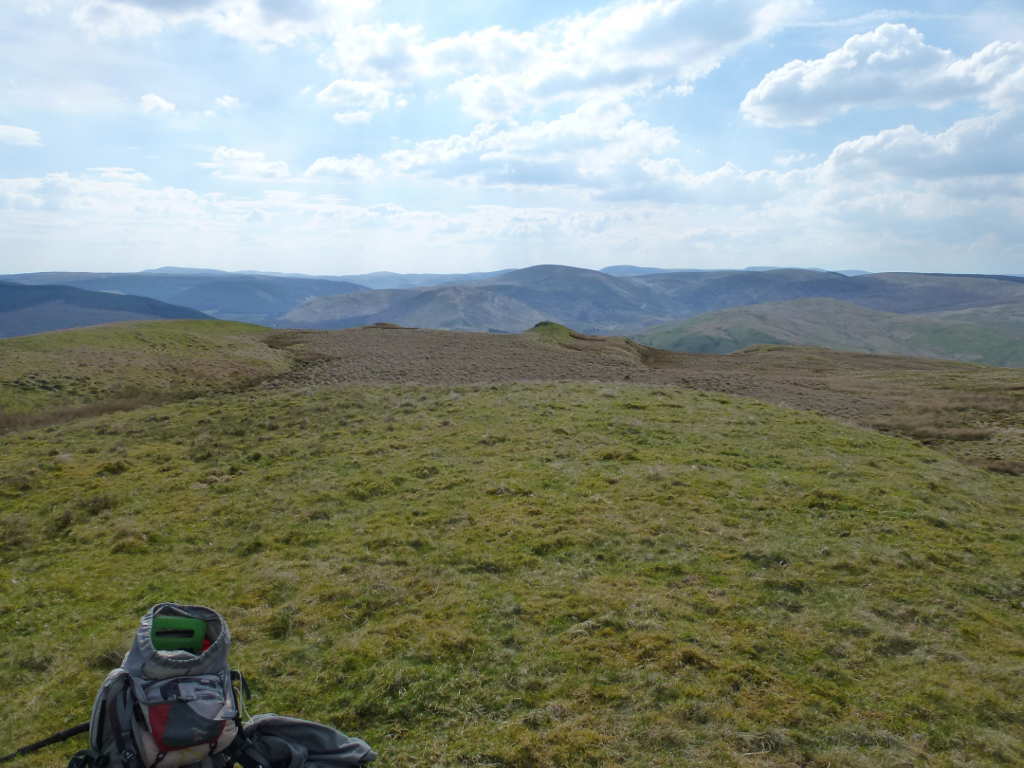 Cacra Hill from the parking place by the track. It’s a fine wee 1pt hill. 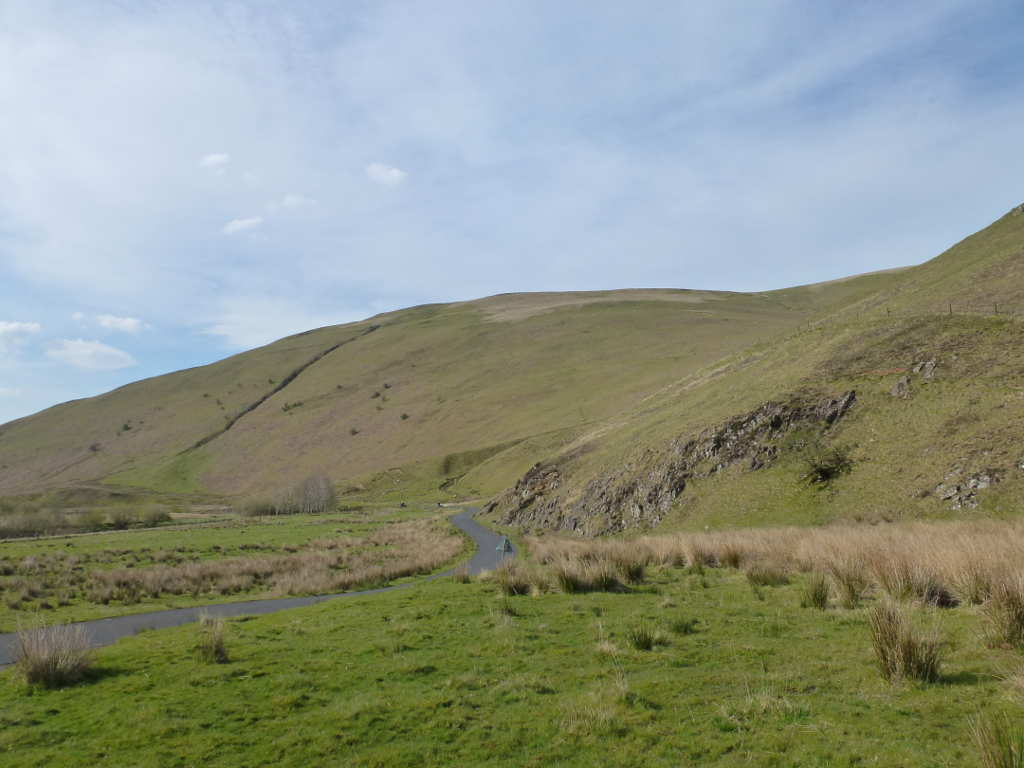 I’ve always wondered what a just planted forest looks like. Most of the pine forests were planted in the later 60s early 70s and are now being harvested. Here is a view of Ward Law and you can make out the acres and acres of regimented trees that have been planted in the past 2 or 3 years. Ward Law was one of the worst hills I can remember for boggy awful ground. However, there is now an excellent forest track that takes you 3/4 to the top and from there it is not too far to the big cairn. I may, just may, give it a bash again soon. 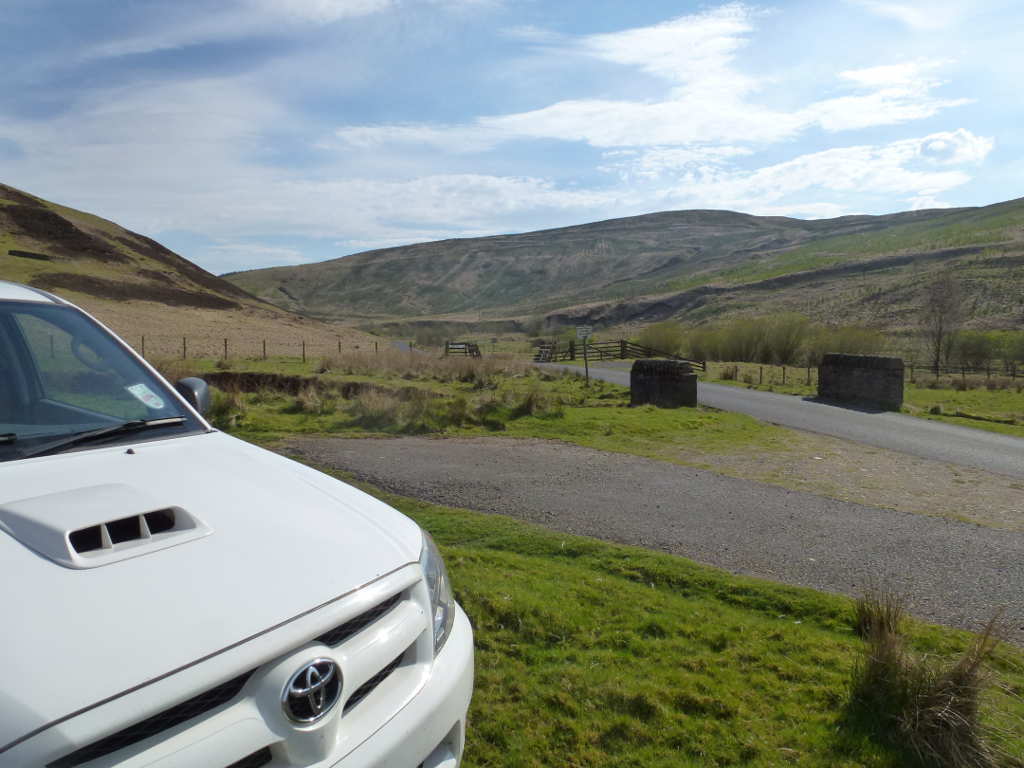 All in all a good day out. Lots of sun which was lovely even if the rest of the sky was broken. My back continues to be OK but whilst I hit my targets for ascent time I still feel knackered so I’m a long way off fit. More summits, more SOTA is what is needed.