Kinda of a philosophical question related to thru hiking bigger trails and SOTA. One of the things i set as a goal last year was to activate all the peaks on the Tahoe Rim Trail, and given that the trail itself does not actively go over any of the peaks, I allocated 1 mile either side of the trail corridor as fair game I decided to also toss everything in Desolation as fair game more for the sake of just doing everything in Desolation as a single backpack. No I did not get all of them last year, but I did manage close to 80% of the peaks. Anyway, I started section hiking the AT as a kid and just for giggles started mapping out and building a spreadsheet of the peaks that meet a similar criteria. The nice thing (or bad thing, you pick) is the AT does go directly over a lot of knobs, balds, and mountains, but will sometimes pass in the shadow of a summit too.
Case in point in W4G (GA) there are 16 summits that fall on/very close to the trail corridor. The trail passes directly over eleven of them, five however are outside the immediate trail corridor and would probably require some level of bushwhacking. In one case (Wildcat Mountain:W4G/NG-020) is a side trail about a half mile away from the main AT.
If you were going to thru hike a long trail, and bag SOTA along the way would you only focus on peaks primarily on the trail, or would you consider the side trips as part of the effort, or as a nice to have etc?
Reminder, this is just a philosophical question, not looking to spark off some great argument about what a trail corridor is, or what would be a worthy challenge etc…as I’ll admit my TRT challenge was awfully lofty and did require a lot of extra side hiking that easily added an additional 40 miles to the Rim Trail…

I thru hiked the AT in 2013, and after a few hundred miles I lost interest in side trails. (Journal here if anyone is interested) Thru hikers can be lazy people. More than once I wondered if it was worth heading a short distance off the trail to refill my water. (Food at the end of a side trail, however, was a different story.

If I were to do another long distance thru hike, I’d probably only activate summits that the trail passed through the AZ of. More likely, I’d only put up an antenna at the end of the day in camp. I can, however, see myself doing something like you did around Tahoe on a shorter trail.

You know about this map, right? http://www.spinmap.com/npota-sota/map.html
I have done most of the Georgia summits and have posted information about them if there wasn’t something already there.
I would guess how far off you want to go is dependent on vertical elevation gain over a given distance. If it is straight up rock cliff and requires ropes, that is different than a mile hike with little elevation gain. The .5 mile hike to Wildcat is a piece of cake, I don’t even think it is that far.

I can only speak for myself, but these days ticking off national trails comes second to ticking off SOTA summits, and by a considerable margin. And anyway, if we were to be true to nature herself, should our trails not lead from mountain to mountain, rather than city to city. For me it is my experience that matters, not how someone else may define it.
de OE6FEG / M0FEU
Matt

A real challenge would be a combination of SOTA and the West Highland Way in Scotland. This 96 mile footpath from Milngavie to Fort William does not actually cross any summits, being mostly low level, but it passes within easy reach of at least 24 SOTA summits. It would be possible to plan for backpacking it in easy stages over two weeks with one or more SOTA activations every day - weather permitting - finishing with Ben Nevis, GM/WS-001.

Anyone up for it?

Jimmy M0HGY (then M3EYP) and I did the Pennine Way 268 mile National Trail in 2006. Several SOTA summits were right on the path, while one required a slight diversion to the side (Dodd Fell Hill G/NP-016). We’d originally intended doing two other SOTA summits just off route (Kisdon G/NP-026 and Dufton Pike G/NP-027) but both were towards the end of long days, and we didn’t bother.

Your body will advise you whether or not to activate the nearby off-trail SOTA summits!

This is a fun & interesting topic to think about. We have done one long (for us) thru-hike (160 miles) with no SOTA summits & several shorter hikes (60-ish miles) miles with SOTA summits. I find (for me) that if the “objective” is the thru-hike, the slightest deviation (even a few steps) is mentally difficult. The time & effort for a side trip, or to set up an antenna seems great. Conversely, a long hike with pre-planned “SOTA-breaks” is a lot of fun - it breaks the hike into segments & allows one to explore lots of new terrain. A lot of it is probably mental & it likely varies much depending in individual preference.

I really like the big loops (60-miles or so), with about 3 SOTA-stops. It breaks up the hike, provides some light pack time & still allows one to see some country.

So yah, I mostly started this thought process as a mental exercise just to do the feasibility planning. Stage 1 is lay out the peaks on map and copy into spreadsheet that includes the mileages from start etc. Stage 2 of the mental exercise is literally to figure out the daily miles, and do a loose plan of where to camp, within the constraints of how well most folks stick to a hiking plan. Planning something like this in general is really fun for me, I had a lot of fun planning my TRT but basically threw the plan out once the snow cleared and I was able to put boots to ground. An exercise like this would require you stick closer to your plan since you also have to plan your activation time in conjunction with when chasers would be around (no way I’d consider it possible to get 100% success rate). A 2m HT would probably take care of most of the southern segments, once you get into NY/VT/NH/ME I would think the HT lacks the needed reach, so time to hop on HF.

A good example of how the AT compares to the JMT/PCT (I have done the JMT too) is to look at Forester Pass which is flanked by both W6/SS-010 and W6/SS-009 and accessible from the pass itself (fyi, both zero ack’d wink wink). In that case, that’s a 4-5 hour endeavor to hit both peaks, so it’s questionable as to whether a thru hiker would bother with that; just to gain the pass is a slog from either direction. The AT OTOH most of the peaks fall right on the trail, or as noted above barely off trail. Thanks for SOTA/NPOTA map link @WG4I that matches pretty close to the map I have built thus far. It’s always been a dream of mine to finish the AT but do it as a single thru hike, and i’ve done my fair share of thru hiking, adding the SOTA component
really adds an intriguing effort that just IMHO seems fun; I would be mentally prepared for hte side trip as it is part of the experience I am looking for :D. Almost like the new trend with Fastest Known Times on these same trails…just one more way to enjoy getting out there.
So FWIW I am at the MD/PA border in the mapping phase and just shy of 70 peaks (528 points). So assuming 90 minutes per activation (setup, call, tear down) that’s 105 hours, so before boots hit the ground, you are already at ~5 days. In the grand scheme of things that is not that bad. I have still got a few states to go and I know that it gets a bit more remote/mountainous in that northern section. If it ends up being less then adding 30 days overall planning for worst case scenario, then for me it’s totally worth it, (instead of an FKT on the AT, doing a SKT (slowest, not SOTA) :D)

From a weight perspective, any HF gear would probably be best served as a 2/3 band CW Altoids transceiver with EFHW cut to length. My current sota bag is ~5lbs and is bulky, fits fine in my pack, but it is bulky (and I worry about the KX2’s sturdiness). You can also make goat and a half on this one endeavor, but uh…SOTA is not supposed to be a contest

I will keep updating this thread for those that are interested once I finish how I would plan it out, and from a timing perspective, hitting the trail Jan 1 of 2020 would be a good window for me, otherwise I would wait for my daughter to finish her senior year, so Jan 2022. I would set my start day as January 1st for a few different reasons, I know most folks start around the beginning of spring, so maybe with the added month of activation time Feb 1 is a good fallback plan. Starting on NYD though just adds more to the experience.

Oh, and to the above post about the West Highland Way I would totally love to hit the trail in G for some thru hiking. Is that the trail with the “May” challenge? Every time I visit the UK, I just love how green and open it is, the wife and I are planning on possibly spending a few years living (retiring…) in the UK

Ryan, WG4I, thanks for the URL http://www.spinmap.com/npota-sota/map.html . That is invaluable to a guy from the west who imagines a blue ridge/Appalachian activation trip someday. Great picture of what is along the Blue Ridge Parkway and the Appalachian Trail. Us data base challenged guys love it when we are served up that stuff.
Cap
W0CCA

Oh, and to the above post about the West Highland Way I would totally love to hit the trail in G for some thru hiking. Is that the trail with the “May” challenge? Every time I visit the UK, I just love how green and open it is, the wife and I are planning on possibly spending a few years living (retiring…) in the UK

This will wet your appetite!

As for “green and open”, try the Black Cuillin! 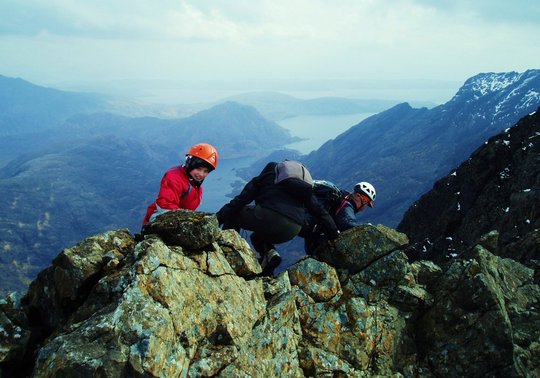 Jon Jones is an instructor at Glenmore Lodge, Scotland. He holds the Mountain Instructor Certificate and is an extremely experienced climber, mountaineer and hill walker. Here he shares his...

I swear there just is not enough life, and way too much to soak up :D. I wish you had not shown me this (teehee, j.k of course). This is going to have to get slotted in somewhere, even if I just decide to walk with the camera and leave the radios at home…

So, I recorded ~140 peaks in total for the length of the trail, 868 total points for SOTA. the great majority of the peaks fall south of MD. It gets a little thin for SOTA summits in PA/NY/NJ/MA but picks back up again once you hit VT/NH. I was kind of surprised by the lack of summits thru the 100mile wilderness. Anyway, the real challenge is figuring out a good amount of daily mileage, but that’s for a different planning cycle/time as in once i were to get closer to launching the expedition…Now to check out that Pennine Way!