Rather than retype content, here is a link that can be used as a starting point for anyone wanting to get an idea of the extent of the fire problem in Australia. The ABC is Australia’s national broadcaster.

Flames rip through towns, fears death toll will rise as bushfires rage on

Huge fires continue to rage in Victoria and NSW, with two people confirmed to have died as flames destroyed parts of the town of Cobargo this morning. See how the day unfolded.

Like many other Brits with relatives “Down Under” I am sympathetically following the news of this disasterous situation. Stay safe, guys, or at least as safe as you can. 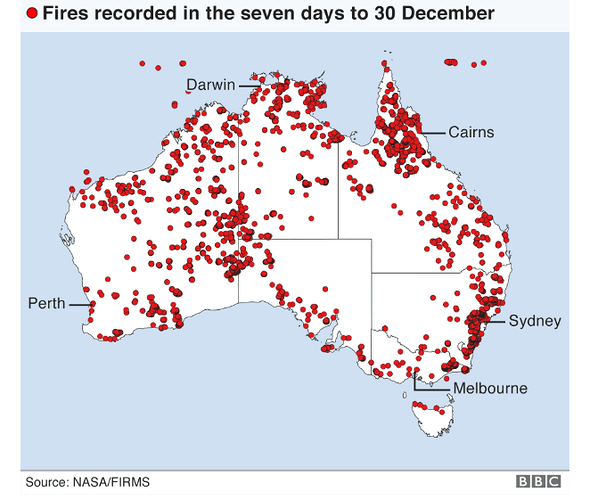 I just heard on the news that the fire is the size of Belgium.

Fuel and food shortages and sleeping in cars: The bushfire limbo awaiting...

Thousands have escaped the flames, only to face another trial … what comes next amid concerns over water, power, communications and food?

The next heatwave will push through the south east of Australia on Friday and Saturday. Forecast temp maximums are 44 to 45 degrees C. The message to SOTA activators is stay home!

Some familiar faces / voices and callsigns have put away their sota gear and stepped up to support welfare and emergency response agencies during this time. I will pop some details below for those interested - however, this is not an exhaustive list - Ie these are the ones I know.

Currently down at the south coast of VK2 operating with the NSW Rural Fire Service and Volunteer Rescue Association you have VK2HRX, VK1DA/VK2UH with VK1MA. Providing supplementary radio operations on the RFS and VRA networks as well as urgent support to getting their repeaters back up and running.

Running a welfare net for local VK1 and regional VK2 members you have VK1AD doing a stellar job and you have me, VK1MIC generally running around trying to balls things up with coordination

I can tell you that each and every one of us is using skills and techniques practised by participating in SOTA!

Fuel and food shortages and sleeping in cars

The MAD-MAX movie has come to my mind. Scary…

The majority of those fires will burn until all fuel is gone or it rains heavily enough to extinguish the fire. This could take months and is normal. Most fires are remote from population centres so accessibility and resources are the issues. Most are started by lightning.

The graphic only tells part of the story. While the area burnt is very large and the loss of wildlife - fauna and flora - and agricultural assets - buildings, fodder, stock, crops, equipment - is enormous, we should remember the death toll remains below 20. To put that into perspective our worst fire event killed 170 only 10 years ago. So while the cost to the country is yet to be estimated - the fire season is not over by several months - we should be pleased that the loss of human life is relatively small.

I do sympathize with those who have lost a friend or member of their family or community or their home.

Ron,
True, but the number of deaths is just one way to measure the impact of these events. I’ve just got back home from my stint as a comms operator at Bega. The number of families in evacuation centres in various places all the way down the NSW coast alone is significant. I don’t have numbers but the local ABC radio Station was interviewing council chairs etc, talking about how long it will be before whole towns get their power, phone and internet back. The disruption to normal life is enormous and will have repercussions for years to come. And as you say, Ron, summer has a long way to go yet. There is no place for complacency on that score.

In the summer most of these coastal areas outside the cities count on the increased tourist and visitor population to boost earnings to allow them to survive the rest of the year. This summer won’t help them, with a large number of visitors evacuated, some to go back home and abandon holiday plans.
I can only count myself lucky not to be one of those directly affected, and to be able to contribute in a small way to the efforts of the Rural Fire Service.

Our people are highly trained & professional, but not always able to complete the mission on first try. This video shows how heavy smoke from bushfires has prevented some C27J & C130J flights from reaching #Mallacoota & #Merimbula #AusAirForce #AustralianFires #YourADF https://t.co/PhNjNIUVHf

Crazy obstructed view even in the air!

I think that the way the local amateur radio community including many of our SOTA friends have stepped up to support the government agencies is very impressive. They have been doing jobs as comms operators, logistics support, manning telephone information lines, setting up temp repeater on summits, putting satellite ground station on air, fire fighting, doing welfare checks on vulnerable people in impacted communities. Offering all this on a 24/7 basis and for free.

Its the true ham spirit that we hear about in action.

I wish it to end quickly.
Unfortunately I know what they are going through. Never forget to protect your lives first.

It’s the true ham spirit that we hear about in action.

I admit to having been very sceptical about radio amateurs having any role in emergencies these days but it’s clear that in Australia, they are making a valuable contribution to the efforts to save lives. That’s good to hear of.

I know what you are saying and agree. Some training events for message handling and other skills that I attended 30 years ago resembled an episode of Dads Army more than a tight knit, well organised and disciplined comms group. But there are exceptions.

The time when a radio amateur had better comms equipment or radio skills than the fire agencies is long gone. Amateur networks based on repeaters are more at risk of being shut down by natural disasters than those of government agencies, though in this case the government network suffered the failure of a repeater site when all the power line poles up the hill were destroyed by the fire. A group of qualified amateurs with Rural Fire Service (RFS) recognition took equipment up that hill and installed temporary repeaters, restoring one of the networks by installing a generator and other tasks. But that wasn’t an amateur network, it was a group of well qualified people doing tech work. They happen to be radio amateurs.

The comms work done by amateurs required RFS callsigns, procedures and compliance with RFS rules. Many amateurs would be able to adapt to the work but some wouldn’t. Also, the work in these environments even in a comfortable office is quite stressful and requires good physical fitness. Not all radio amateurs are ready for that.

Thanks everyone for your good wishes. There is a lot of material about the fires being published on youtube, facebook and twitter, more than enough. Other sources include the daily newspaper websites.

Unfortunately the news From the fire in Australia is not good,I talk before 1 Hour & 30min with my Cousin who lives in victoria and received notice to evacuate the house with the family.The Fire is just 18km from his house.the disaster is huge both in the Australian ecosystem and in the loss of people and homes.The area destroyed is larger than the Belgium my friends.
I hope the fire nightmare stops and that people can come back to their places again.
We wish the best for our friends and relatives who are being tested during these hours.

The Guardian has an app that shows various stats about the area of the fires, selectable by state and presented as a square that you can place anywhere. Eg. I placed it over London and a lot of ocean was included. Moving the square to the west slightly covered a square starting at the English channel and its northern edge at Liverpool. This is a representation, obviously the fires are not square in shape. There are well over 100 separate fires.

How big are the fires burning in Australia? Interactive map

The scale of this season’s bushfires can be hard to grasp. This interactive map shows the total area burned, overlaid on different capital cities

Yes it was so unfortunate that we were asked to stay in the building for a debrief right when you were about to depart from the summit. About 15 mins later we were out in the car park but by then, no go.

It would have been a chase to remember.