Hi all,
This was posted a bit later than planned, but I needed some time to unpack and spend time with family (and maybe playing with some new radio gear).

Last week I had an excellent opportunity to fly across the country (From Toronto, ON to Calgary, AB) for work, which gave me three days to do some real SOTA. I made plans to activate VE6/JF-088, VE6/JF-033 and VE6/JF-086.

Before I left, Malen (VE6VID) sent me a couple of messages about my plans and we kept in touch all weekend with him giving me some tips and we kept eachother informed of eachothers successes. It turns that he works at the FBO at the Calgary Airport where we had parked our plane for the weekend, it’s definately a small world out there. Hopefully we can meet up next time I’m out that way.

My first activation was VE6/JF-088, the Barrier Lake Fire Lookout on Yates Mountain. A good summit for a first true run at SOTA’ing. The weather was cool and the trail was fairly quiet (I did give a woman a good scare on the trail who thought she was alone). There was a bit of rain on the hike up, but being below the treeline when it happened seemed to shield me for the most part. 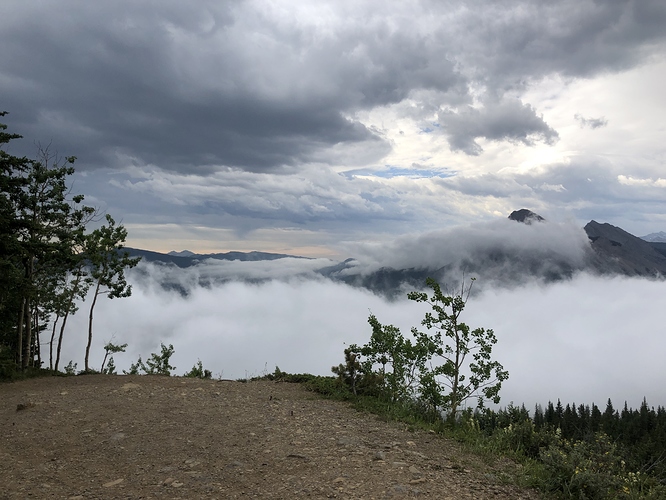 20-07-24 09-16-32 75934032×3024 2.84 MB
Getting to the lookout itself can be a bit of a challenge. The trail isn’t maintained from the Jewel Pass up to the lookout and it’s not very obvious where to go (according to the gentleman working there, that’s by design and in fact, they sometimes block the trail if there are too many visitors). Once I arrived, I had a great conversation with the worker who fortunately had no problem with me setting up at the lookout, I even had the option of using the helipad if I desired. 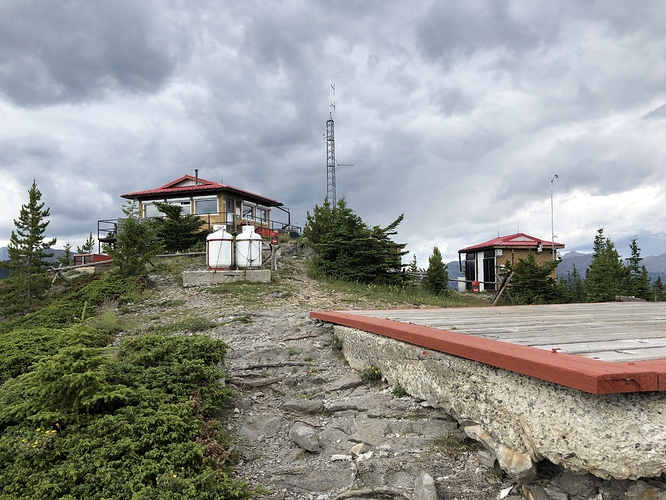 20-07-24 09-52-55 76054032×3024 3.93 MB
I got set up on a picnic bench and got on the air. I figured FT8 would be the easiest to get the required contacts for the activation and points. Unfortunately, my equipment decided not to cooperate. I couldn’t get myself spotted on SOTAWatch and then the cable for the screen on my Raspberry Pi had a loose connection that generated a lot of RFI and gave me a bad visual signal. To top it all off, my Bluetooth keyboard/mouse kept disconnecting and eventually became unresponsive. I ended up with 2 contacts through FT8 over the course of almost an hour (1 on 40m, the other on 20m). At this point, there was more rain and I heard some thunder in the distance. So I started to pack up, giving the occasional CQ on my handheld. I then heard a call from VE6IXD who had been looking for me. When I mentioned that all I needed was one more contact to get points, he made a call and VA6QAS came on just as I finished packing, enabling me to get my activator points. And of course, as soon as I left the activation zone, the rain disappeared and the sun came out. 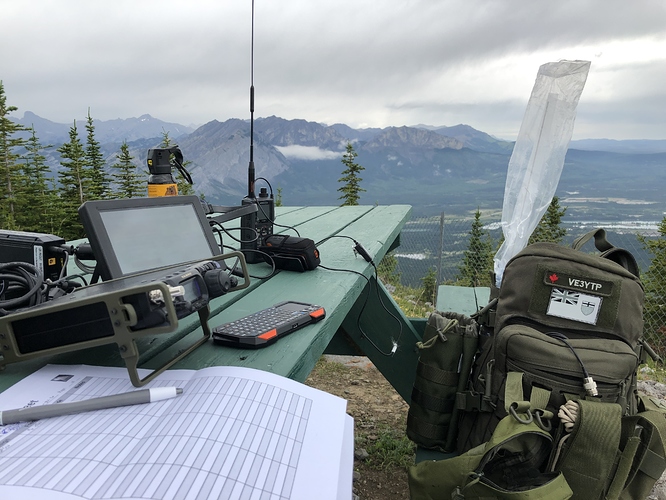 The next day, I made my way up VE3/JF-033, Pigeon Mountain. This one was a bit tougher. It’s only 7.4 km one way, but the first 4 km goes slowly around the mountain before turning in and going straight up, with the ascent coming to just over 3100’. Once you get above the tree line, the path is nothing more than loose dirt and rocks and it can be hard to get a proper footing if you don’t have poles (the same goes for the way down). I eventually made it to the summit and got my station set up. As soon as I was ready, the clouds came, the cold wind blew and again, my equipment gave me problems (as an aside, it all worked perfectly in the hotel). 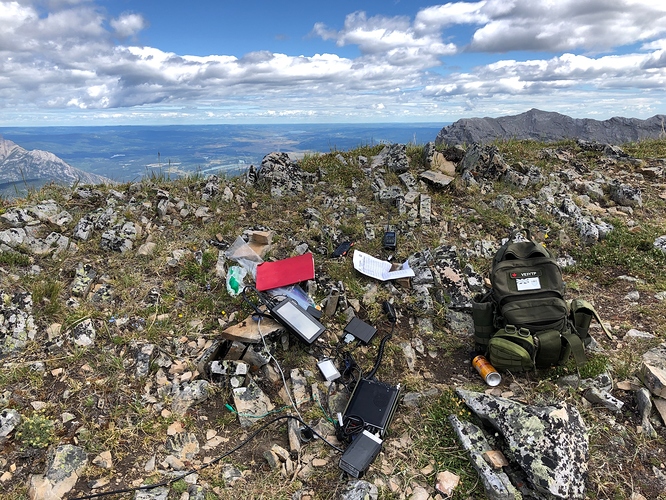 VE6IXD came on again on 2m FM as my first contact as FT8 was a bust on 40 m and he was able to help me spot (as I didn’t have any cell service). I was able to manage one contact on 40m SSB over in Victoria, BC, across the rockies before switching to 20m. Once there, I was able to get a good string of contacts, including a S2S with K6CPR. A much better run than the day before. 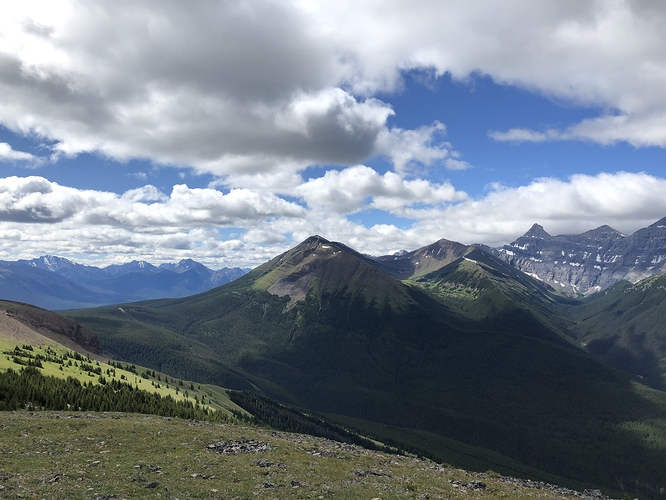 The cold wind started to become a bit too much, my fingers were starting to seize up and it became hard to write down callsigns. So I packed up and made my way back down the mountain. Just like the day before, as soon as I left the activation zone, the sun came out and a nice warm breeze came through.

I made Sunday the easiest as I knew I had a long day of flying ahead of me back to Toronto on Monday. I made my way over to the Sibbald Lake Recreation area to tackle VE6/JF-086, Deer Peak. A short 2.5 km hike across a field and up into the forest lead me to a great area in the woods to set up my gear and start making contacts.

VE6IXD again came to help me activate the mountain. I ditched the screen and Bluetooth combo on my Raspberry Pi and switched to using my iPhone and VNC viewer. 40 and 30 m were a bust. I could hear and see lots of European and South American stations who didn’t respond and barely any stations from North America. I made one 20 m FT8 contact before moving to SSB. The first 20 m QSO was another S2S in California before another line of contacts came through, one after another. I recognized a few callsigns from the previous days work and I hope to return the favour to those hams one day. 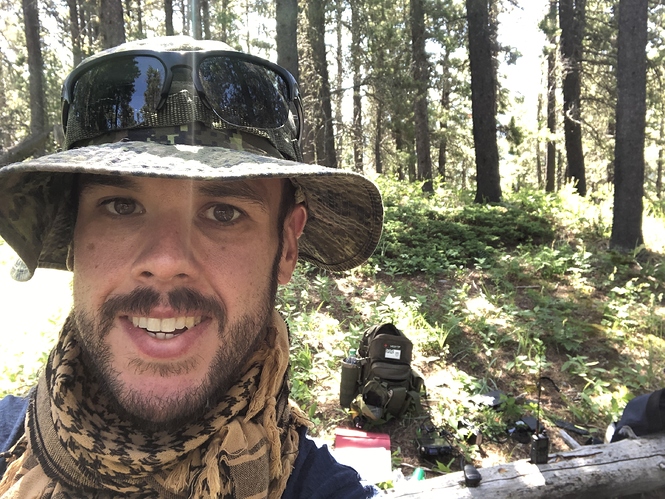 Malen, VE6VID sent me a message that there was a hat waiting for me at the airport for when I checked in the next day, which has become my new radio hat. Thank very much for the present and I hope we can activate a summit the next time I’m in town.

I got to the airport the next morning and flew a mostly uneventful flight back to Toronto. I stopped in at a local brewery, picked up some beer and made my way home to my wife and son. After a couple of beers and some dinner, I was ready for bed and a few days off at home.

I’ll look back on this trip with fondness and am eagerly looking forward to what lies ahead.

Thanks to all those who helped out and I’ll catch you on the air.

Andrew.
Next time, weather permitting we can do an Alberta 3 play, trust me pal… hahaha.

Andrew, I tried to work you during your visit here as Malen had informed us of your visit but either timing or propagation wasn’t in our favour. I am happy you were successful in your activations.