I always try hard to not ruffle the feathers of other fell goers, but failed today. You know that feeling, Someone stood off to one side, waiting for you to catch eye contact. In this case the gentleman initially was curious what I was up to, but I could feel there was something remaining. “You need thicker wire - I nearly walked into it earlier”. Fair enough. The SOTABeams Band Hopper IV, a legendary antenna (in my opinion) does use thin wire. It is bright yellow however!

Anyone who has operated portable in the Lake District knows they are treading a thin line. People are very precious about these fells. For good reason. As I was coming off the fell in the light drizzle, I thought “no matter what we do/have already done to this planet I foresee drizzle on these fells for thousands of years to come”.

Today it was the IC-705 again, nestled in the Manfrotto camera case that is proving a very practical, reused housing. With a 4200mah LifePo4 battery in the bottom of the case, switched fused lead and speaker/mic accessory pocket the best thing is the flip top that can be used to protect the rig from precipitation with a flick of the wrist. Initially in ‘the shack’ I found the length of the speaker/mic lead a pain, but whilst operating portable you can happily stand up and move around with this lead - win win win (in the cold for sure)!

HF went well considering the low 5m peak of the inverted V. 40m was mad and finding a frequency clearly had SOTA activators today struggling. Last night I sat in a lay-by near J37 of the M6 with a Chameleon MPAS 2.0 deployed listening to transatlantic contacts, Jamaica and South America. Interesting HF conditions! 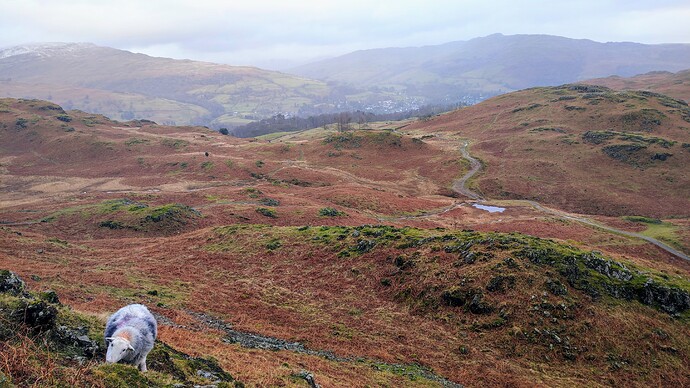 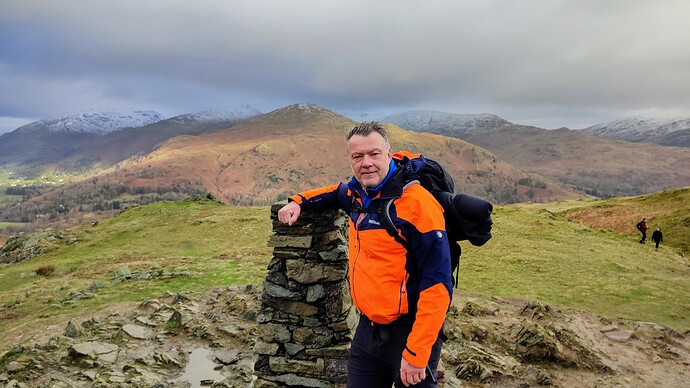 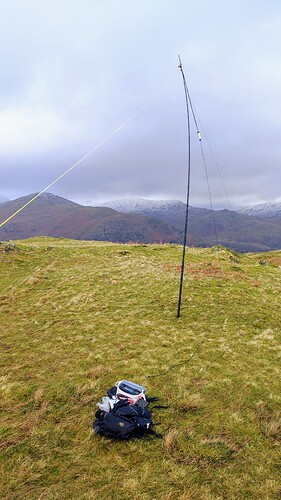 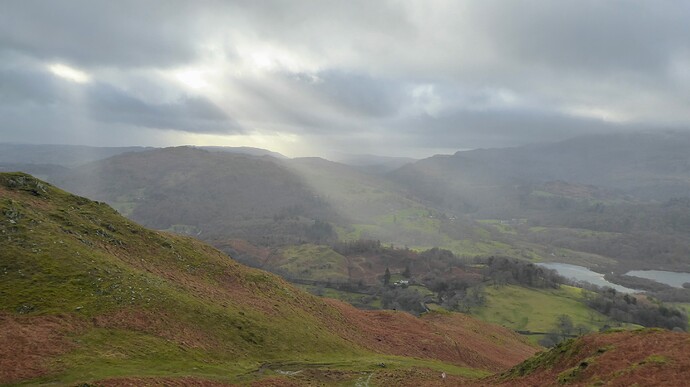 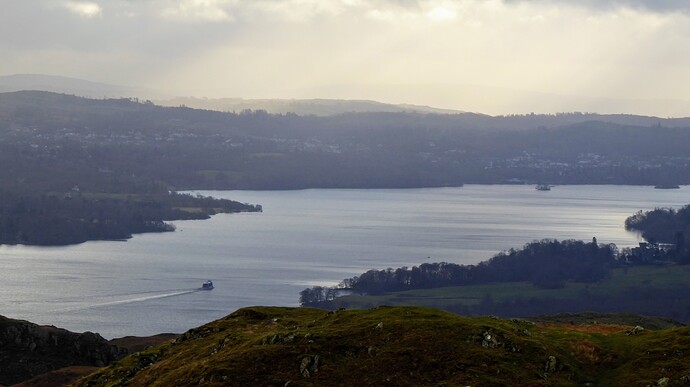 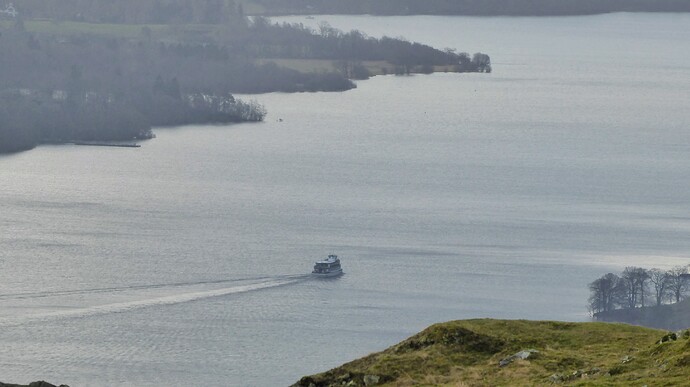 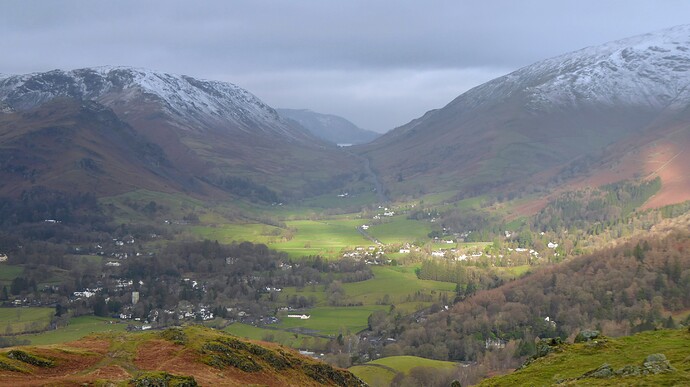 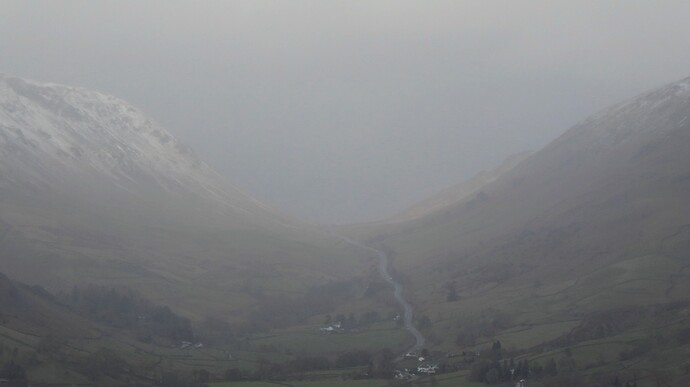 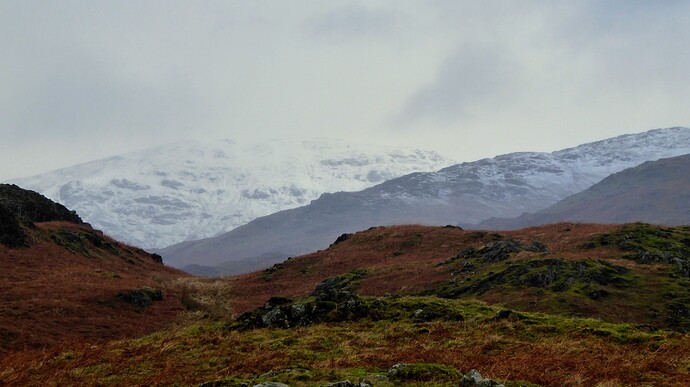 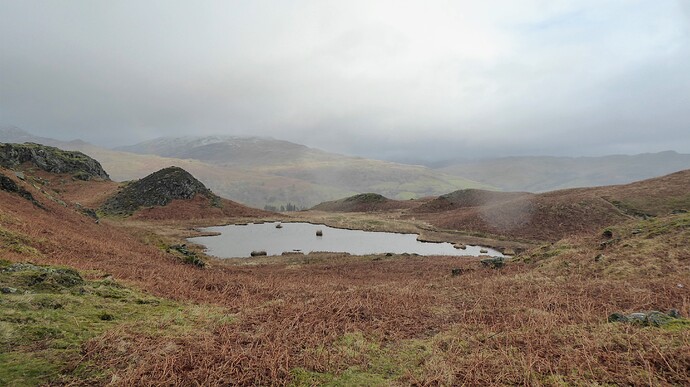 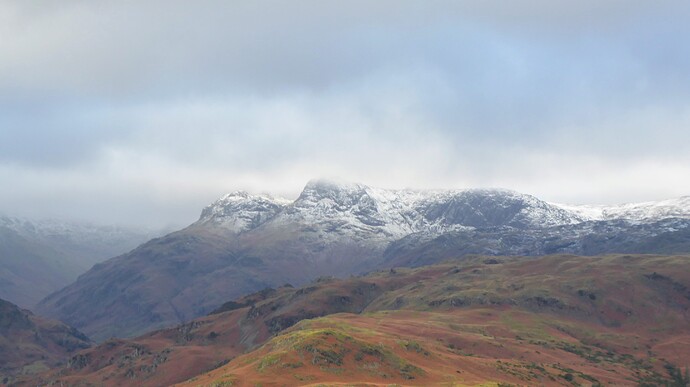 I’ve almost always had interesting weather on Loughrigg Fell. With the predominant westerly wind today I was counting on the higher summits to the west to break the back of the precipitation and this was the case today.

Only S2S today with David on G/SP-005 running the ‘naked’ FT-818 with stock antenna to good effect on Pendle Hill - good distance that. A nod to Chris 2E0XLG/P who was in his shack in the Yorkshire Dales which is at-height and has a wood-burning stove. He responded to my CQ call with the 2m RF power on the IC-705 set to 0% - following experimentation - so I’ve no idea what 0% equates to in Watts. Andrew @G0LWU also responded and pointed out I didn’t sound right - so his equipment passes the muster test too! More successful when running a full 10w including Geoff @GM4WHA who always puts himself out for a Lake District chase - operating /M from Tesco’s in Annan.

Thanks to all chasers! The rain didn’t really materialize at midday as expected - however the light drizzle will eventually soak you! I had a very unusual experience over the weekend. I finally have an HF antenna at home. It isn’t perfect by any measure but I am making contacts and it feels really weird to be in the house doing this. I’ve had 4 years of only portable HF. Mind with the noise levels you dedicated chasers don’t have anything to worry about! 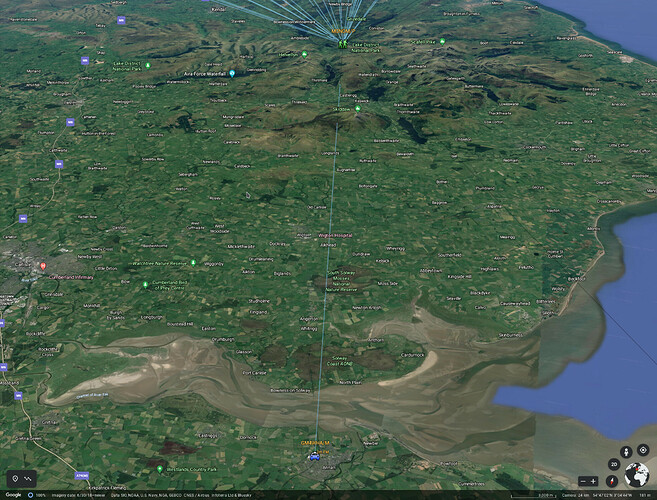 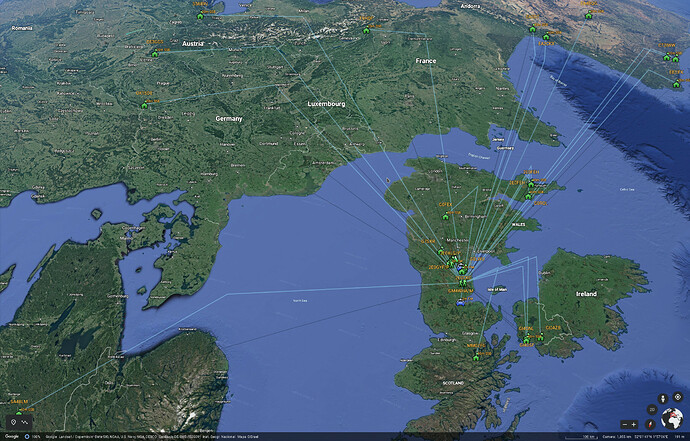 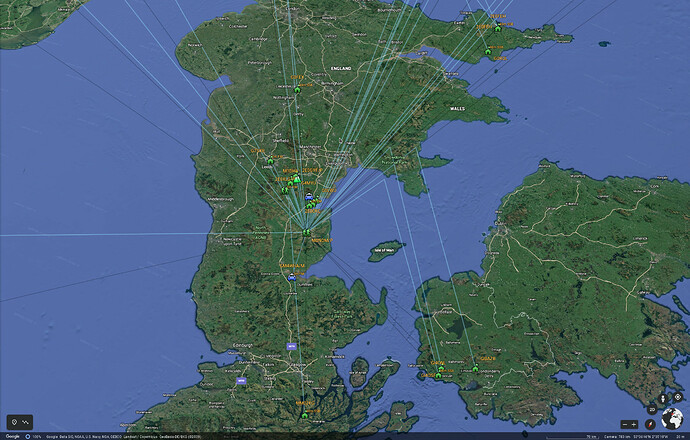 Great write up and photos. Maybe the passer by needed thicker glasses to see your thin antenna wire.
Ian vk5cz …

Hi Mark,
I saw your spot on SW3 today and tried to chase you, but I was not able to copy you at all, unfortunately. Propagation was kind of capricious today, I chased Martin M7BIA with great signals but I was unable to copy you, as well as an activator in Wales or several activators in Germany.
Let’s hope for better luck next time.
73,

I’ve done that, but not by design. I briefly took part in the RSGB 2m Backpackers contest last year from the summit of High Willhays. I could hear a lot of activity but could only contact someone about 10 miles away. I gave up and switched to HF and in the process noticed the HF power was set to 0% - but I had still been heard by someone.

I’ve just bought an ICOM IC-7300 for shack use and it does the same. It still transmits a bit on 0%. You can see this if you look at the meter showing the current in the PA transistors - it will show a small reading on transmit.

I saw your spot on SW3 today and tried to chase you, but I was not able to copy you at all, unfortunately

Ah that’s a shame, but numbers of chasers were down in general - I have previously suspected that due to the topology of Loughrigg Fell (it is nestled between lots of larger summits) that this affects both HF and VHF takeoff.

I did look for my straight key, I need to start doing more CW activations too

I have to make a decision now whether to detach the Palm Pico Paddles from their underslung location on the FT-817ND and start using them on the IC-705.

How do you find the Australian Survey Department’s maps’ coverage of the Lakes Mark?

Do they mark the areas where the Drop Bears can be found ?

Ah that’s a shame, but numbers of chasers were down in general - I have previously suspected that due to the topology of Loughrigg Fell (it is nestled between lots of larger summits) that this affects both HF and VHF takeoff.

Your comment about the take off is interesting. I saw your Spots on 40/20m but couldn’t hear you. I was on G/CE-004 Bardon Hill in Leicestershire. There were road closures to the North of me in the Peak District so it was easier to pop south, down the M1. Whilst the tracks were a mud fest, the sky was blue for most of the day!
The downer with Bardon is the BBC transmitter that plays havoc with 2m, but a Bandpass filter helps. Generally I found band conditions to be good I got 50 QSOs with 14 S2Ss. For Speed I was using the SuperAntenna. Europe seemed pretty open but not a lot state side.
I was thinking of doing Loughrigg next month as Julie(partner) is doing a Gravel bike ride there. 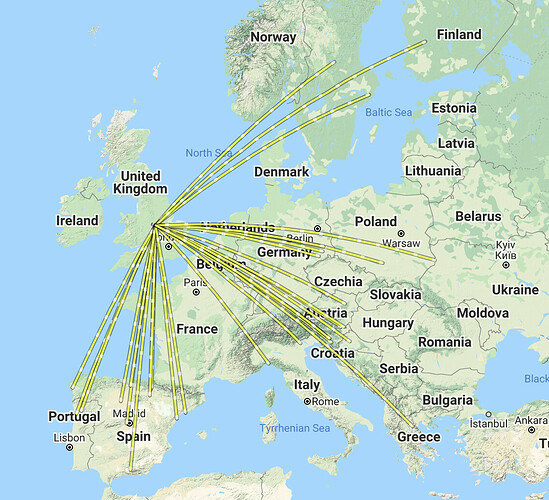 Just want to point out that I did check the HF power and it was set to 100%, so it wasn’t human error

Here’s a picture of my flutterers

Sorry the picture is not pin sharp, it’s been reduced and blown up and through a few stages of jpeggery compression. You can see the flutterers on the wire elements. 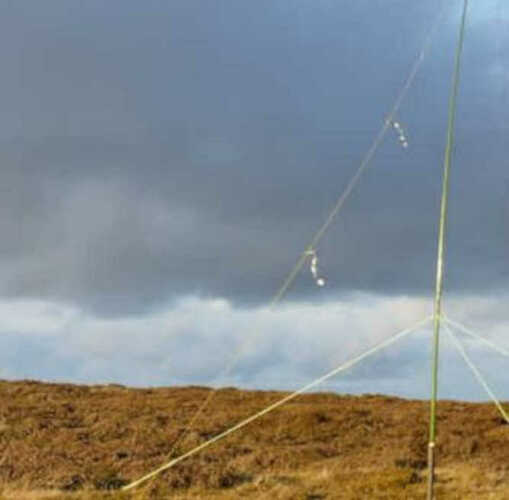 They’re pieces of plastic cut out of a single use* shopping bag that have alternate black and white squares printing, about 2cms x 15cms and attached to the insulators where the band change links are. I have them on both my 60/40/30 and 30/20/17 dipoles. The plastic was so thin and light I doubt there is a gram of material.

I have carried a few single use shopping bags for years on activations. Putting your boot in a bag makes it slip into over-trousers simply and trivially. You can use them for collecting up litter from paths and summits too. When on Minch Moor GM/SS-133 one winter, I was hiding in the dugout shelter and was using a dipole with grey wire. There were many MTBers whizzing about so I tore up strips from an orange plastic bag and attached them to the dipole so it was obvious “something” was there. TBH I didn’t care about the cyclists but only my antenna

I made these more permanent ones a few months later. They really help people see the antenna if they have failed to note the 5m green pole and the 3 fluorescent guying ropes I use. They came in a pack of four with plastic length adjusters for £1.50 from ASDA and as you can see in the photo, they stand out well against Scottish ground.

*single use is a misnomer here. When single use bags were free they weren’t free… the cost was built in to the products you were buying. I was damn sure I would get more than single use from such bags as I had paid good money for them. I always used such bags until they were falling apart.

That’s a great idea Andy and one I will implement. Whilst on a Wainwright The Beacon (South West side of Coniston Water) a load of lads turned up on trail bikes. That was the only time I was really concerned. Lets face it with the antenna wire in a SOTABeams Band Hopper IV it is the wire/setup that is going to give up first rather than someone’s neck.

As it happens I had a good chat with them when they reached the summit. Complete bunch of nutters, but in a nice way.

I did listen Mark as I usually get a hint of groundwave here, but nothing I’m afraid…

What antenna were you using for 2m as Loughrigg is a good contact for me on 2m from Annan.

It is a Spectrum Communications Slim-G.

It is a Spectrum Communications Slim-G

Mark how are you finding it? I have one and a Hawkins Viper, but don’t really see much difference. I know Ben GW4BML is a fan.

I’ve had at least two. The construction has the twin feed wires entering the matching unit box through two holes in the plastic case and I’ve found that to be the weak point. They aren’t designed for permanent installation without waterproofing. Unfortunately I’ve not done any quantitative comparisons, but it has always performed well. I can mount it, as pictured, at the same time as the SOTABeams Band Hopper IV. I suspect it doesn’t work appreciably better than a similar home made version - one with RG174 as the feeder might provide less load on the mast however.