What is the theoretical effect of a small, knotted loop, in an insulated-wire antenna?

I see many linked antennas with small, knotted loops, such as this. Clearly, in the practical world, such a loop is inconsequential.

But I’m unable to figure out the theoretical effect. Could someone help me?

The electrical current obviously must flow through the full length of the loop, but what’s happening with the electromagnetic field? Is it coupling straight through the knot, so the knot simply behaves as a thick spot in the wire?
TIA
73 DE K4KPK/Kevin

I would use the inductance formula for a small air-core loop to get a first approximation. I expect it is very small. Inductance would slightly increase the electrical length of the wire, lowering the resonant frequency, but probably not a measurable amount in practical use.

The table below lists some common simplified formulas for calculating the approximate inductance of several inductor constructions.

But why is a knot used with that insulator? Weave the wire through the three holes. If that still slips, add some glue or a tie wrap. Maybe use a tie wrap as a stopper around the wire.

would use the inductance formula for a small air-core loop to get a first approximation.

But why is a knot used with that insulator? Weave the wire through the three holes.

Maybe the other two holes are spare in case the first one gets lost?

Sorry, I could not resist.

why is a knot used with that insulator?

A very astute observation for that particular example. There are other cases where a knotted loop can be handy. However, your point is well-taken in that perhaps I should just think a little harder in those cases too.

Probably, most of them can be eliminated with a couple of zip ties and a spot of glue. Hmmm… I’m partial to PFTE antenna wire. I’m going to need to track down a glue which sticks to that.

Kevin,
The practical consequences are not discernable, otherwise no one would do it. Stop fretting.

I used to be rusted on to hard drawn copper with glazed porcelain insulators and wrapped and soldered ends and centre connections as per 1958 ARRL.

Now I use insulated hook up wire and tie knots at every plastic insulator. I also use thin coax. All in the name of convenience and practicality. I accept there are losses but I’m on the air.

The small loading effect is less than the changes caused by the variation in ground conductivity from one summit to the next.

Doing a proper theoretical analysis is for someone above my pay scale. It’s also pointless except as a training exercise.

Do you think that such a small knot has any effect when working on such large wavelength ?

I’m mostly curious about what happens. Clearly, it has no significant consequence, or people

It is easy for me to visualize how DC would travel through the knot and the loop. Wunder offered the “it works like an air coil with a single loop” for the RF in the loop itself.

Electromagnetic waves are something for which I have no intuition. When they hit the knot+loop, I have no intuition as to whether they basically ignore it and barrel on through in a straight line despite there being no straight-line conductor, or do they follow the conductor?

Get yourself a copy of an electromagnetics simulator (openEMS?) and simulate it so you can see what happens.

Do they have an effect on an antenna? Yes. Is the effect noticeable? Highly unlikely at HF.

if you don’t like knots you can also use a ligature or a small non-metallic collar like this : 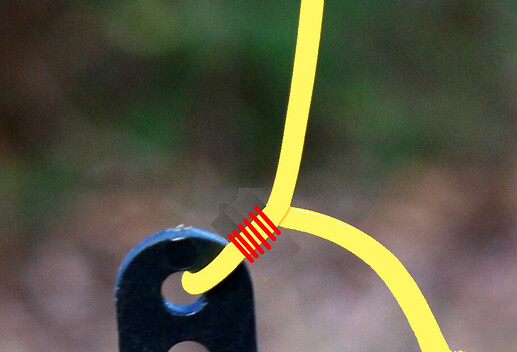 What is the name for the kind of insulator shown in the photo at the original link?

It seems like it might be handy to have a handful of those if I’m going to try and build a linked antenna.

What is the name for the kind of insulator

My insulators are made from the transparent plastic used to make CD jewel cases. They were sliced up on a guillotine for speed. But anything non-conductive will do. You probably put all sorts of suitable plastic material into your kitchen (recycling) waste every day.

Don’t over think this stuff.

Don’t over think this stuff

I wonder if you’ve mistaken me for some other K4KPK. I always overthink this stuff! When I think I’ve discovered something new, everyone else has known about it for 50 years. Etc.

I’m with Ron on this one. Whatever effect there is, is minor. And my antennas mostly do have knots in the dxwire-like antenna wire at every insulator. On 40m, my linked dipole has knots each side, on 10, 12, 15, 17, 20 and 30m. If they have a cumulative effect, it is pretty hard to measure or notice. My score of over 1700 points to date, demonstrates that it is nothing to worry about. My insulators are made using discarded nylon-like kitchen chopping board, repurposed using a hacksaw and drill. Not very attractive, but again, the results indicate it is good enough.

Electromagnetic waves are something for which I have no intuition. When they hit the knot+loop, I have no intuition as to whether they basically ignore it and barrel on through in a straight line despite there being no straight-line conductor, or do they follow the conductor?

The current follows the conductor.

For alternating current, like RF, coiling it makes the electrical length of the wire longer for the same amount of wire. A loading coil has a large enough effect that the antenna can be much shorter, often half the unloaded length or less.

But, because the field is concentrated around the coil, that part of the antenna doesn’t radiate very much, so loaded antennas are less efficient at turning RF currents into radio waves.

Throwing some very approximate numbers into an online calculator, I got an inductance of 2 nH (nanoHenries) for a one-turn coil of that size. A loading coil for a half-sized 20 m antenna would be 300-400 μH, so the knot has around 1/100 of the inductance needed to make a real difference in the antenna length. That estimate could be off by 10X, but it still wouldn’t make a meaningful difference.

Hi Walter, thanks for that explanation. Helped me to understand it fully.

I think you are right. So its 1/100,000 of the inductance of a loading coil. Even lower than what was already not worth worrying about.

Knots don’t matter on HF. As shown previously the effect is miniscule.

Sotabeams use knots on their antennas. No one says there is a problem with them. There is no evident shortening due to the knots.

I used to be very pure in my antenna construction, now I am pragmatic and use knots.