I know from talking to people on activations, that there are a growing number of us using the Xiegu X6100. So I thought I would start a thread where we can discuss our experiences. My first HF rig was a Xiegu G90, which I love, so when they announced the X6100 it was a no brainer for me. Yesterday whilst activating G/SP-004 I was joined be Ben GW4BML who also has one, I know Dave M0JKS has one.

On my first trip out with it, I got a VK chaser, which was encouraging. I tend to use it with an external battery, so I get the benefit of the power increase from 5 to 10w. With a 3S/5000mAh battery I easily get 6 hours plus). Yesterday on Shining Tor using a linked dipole (20/40) I got 44 QSOs and 27 S2Ss. I set myself a silly target of getting 2000 S2s points this year before my birthday, which I am happy to say I have made.

All in all the radio has performed really well. As with a lot of modern products, the firmware tends to get tweaked as time passes and things get even better. I am on the latest version V1.5. There are a couple of things I would like to see improved. The red on blue text for some of the displays in not contrasty enough and I would like the scale of the SWR meter to be 1-5 rather than 1-10 (Like it is on the G90). As the radio is Linux based I know some people are working on various hacks that will add functionality. It would be great if Xiegu made the firmware Open-Source, although I suspect this isn’t going to happen anytime soon.

A tip: you can alter the friction of the main tuner, just slip off the rubber cover and undo the grub screw (This allen key is imperial btw). Push down and tighten to make it stiffer.

One issue I have had is that dust can get under the main screen. There is a video on YouTube on how to clean this, but it is a minor annoyance that I can live with.

If you are looking for a case, the GoPro case could have been made specifically for it. It fits like a glove. I am also using the extra side handles to protect the front. The case is £11 if you have a GoPro subscription. 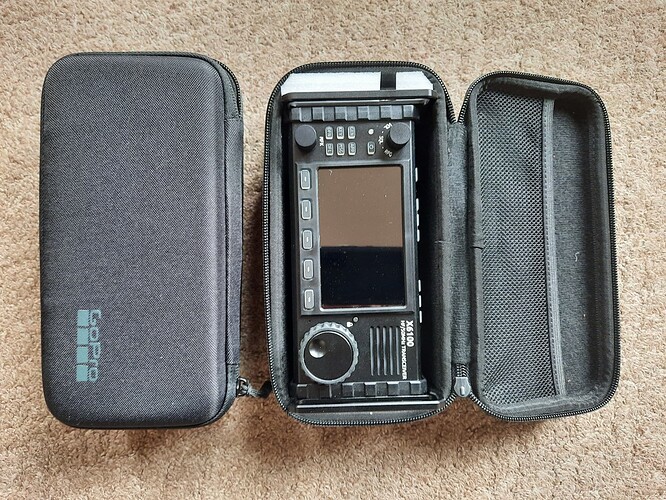 All in all I am really pleased. I would love to hear other peoples experiences

Hi Martin,
have you been able to try out the Noise Reduction feature at all? On the G90 (as you’ll know) there is only Noise Blanking rather than Noise Reduction and that will most likely never be added to the G90 firmware as Xiegu prefer you to buy their new external noise reduction system. Fine (if a little expensive) for the shack but no one wants another box to carry, if out portable. Hence, the built-in NR & NB in the X5105 and X6100 is a feature that might attract me to getting an X6100 in the future.

have you been able to try out the Noise Reduction feature at all?

Ed, i never really got on with the noise blanking on the G90 but have been very impressed with the noise reduction on the X6100. On the last few activations I have just left it on, it does a great job. Overall i dont think the sound is quite as good as the G90 but that might change with upgrades. I always use headphones on activations.

Hi Martin,
another Martin here!
In April I bought my “first” X6100, which I returned to the reseller
because it had some defects like not showing any signal in the top right
spectrumscope, not decoding cw with any firmware etc.
Then another arrived: it had loose legs (i discovered it was missing two
1mm bearing-style balls to make the legs “click” in the right positions).
Then I had my first SOTA activation with it and, putting the CW key 3,5mm plug
in the radio jack, the jack was broken falling inside the radio.
The reseller was very quick to deliver a new radio, and I am now using it
hoping it will be the definitive one.

During my “new new X6100” first SOTA activation I was really worried that
something could go wrong another time, but my being stubborn was rewarded
with two impressive (to me) DXes: ZL and VK.
It was the proof that the radio was sending and receiving correctly (in CW mode)
and I thought that the worries were over.

Sadly I had two very close contacts on my last activation, and both complained there
was a problem with my CW tone: after any “dit” and “dah” there was a “queue” of
minor intensity wich caused poor understanding of my messages.

At home I tried to replicate the issue sending my CW Cq and listening with another radio:
the “signal queue” was there. Luckily I had the idea to try to change the QSK setting in
the KEY menu of the radio. Putting the value to zero the “queue” vanished. Raising
the value raised the queue duration accordingly. I now think it is a software bug and
sent a report with video to a reseller which is collecting this reports to send them to the
manufacturer for future fimware improvements.

If someone is discouraged by my story, well they have to read my full message:
I am very happy with several aspects of this little radio:

Hoping that my story can be useful to others, I send you my best GL and 73
de IU2IJW
Martino

Where did you buy your X6100? I bought my G90 unseen on that big Chinese warehouse and I was fortunate not to have had any issues with it, returns would have been difficult.
I am surprised and glad to hear that the display is visible even in bright sunlight. My experience with the G90 is different. But putting it a little into the shade also solves another problem: the radio tends to get hot under the sun

Concerning the battery lasting one hour: Is this for CW or SSB?

I am very happy with my Xiegu but I would not recommend to anybody.It gives me a lot of problems to say a friend buy it!!

One day…it didin´t worked at all and I solved reseting it.

The last problem was with the speaker.-suddenly it stopped working.I solved with an external speaker and now sound very good. 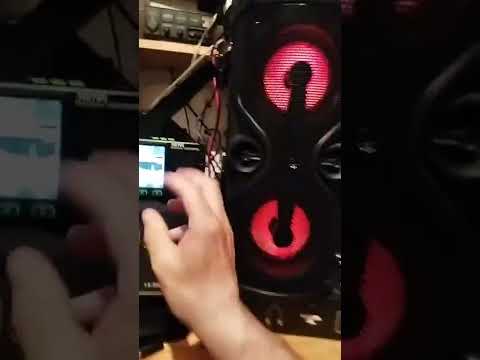 Some buttons like the powe on don´t reply at first. When it starts it takes its time you don´t kow if it will go on.
I have worked hundreds of QSO with it and made several activations.
its weigh is good,the tuner is outstanding.It has 6m…Everybody loves its display…

I have worked VK with it 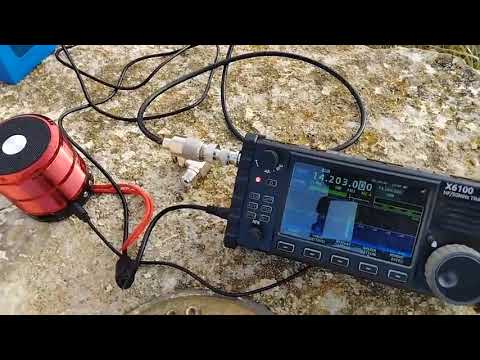 Would I by another one? absolutely yes.

A useful thread in helping me to decide NOT to buy this radio yet. If I am going to walk for 2 or 3 hours to a summit I want to know that the radio will turn on and work reliably when I get there. Also if I have to haul along another battery to get more than an hour of operating that for me renders one of its main attractions (the internal battery) moot. Hopefully future production runs will improve on both of these issues but I won;t be retiring my FT817ND just yet

Some buttons like the powe on don´t reply at first. When it starts it takes its time you don´t kow if it will go on.

It takes a long press to start and to turn off. It takes a while to come on because it is an SDR radio. When you turn it on it is loading Linux. It is booting up like any other computer.

The last problem was with the speaker.-suddenly it stopped working.I

Hi Joaquin,
I have to ask - if you had several hardware problems with your X6100, why didn’t you return it under warranty for replacement. It sounds like you have what the Brit in me calls a “Friday afternoon radio”. In other words it was rushed through production before everyone left for the weekend.

The June edition of Practical Wireless has a review of the 6100. I’ve only looked at the Summary and it highlights weaknesses in the firmware.

At the risk of infringing copyright here is a screenshot. 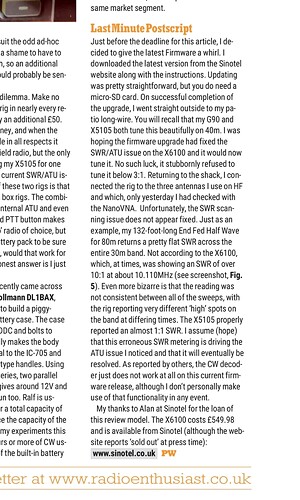 I’m not near my home confuzer, but I think KM9G (??) has a bunch of videos on his youtube channel going over this rig in great detail. I think they’ve even hacked the firmware and have been doing a bunch of mods/tricks to this rig…I too was on the fence on buying this rig, so went with the little FX-4C instead…Maybe once they get it worked out and ready for prime time I might jump on it…

Also a review in July 2022 RadCom. The author obviously didn’t get a “Friday Afternoon” rig but he does highlight a bunch of shortcomings so probably a useful resource

Another new radio that has been announced from this Chinese manufacturer is the G106. This is a replacement for their G1M model but a full SDR in the process with some similarities to the G90 but only with 5 watts output, not 20 watts.

It’s a smaller, lighter radio, (720g) more targeted towards the digital and CW markets but with SSB and AM as well.

No internal ATU or battery or noise reduction. Quite a basic top band to 10m portable radio.

From what I have found rumoured on the web it’s thought it will cost around the US$350 price point, which seems a little expensive these days. Of course, who knows how long it will be before it is actually in stock and for sale? 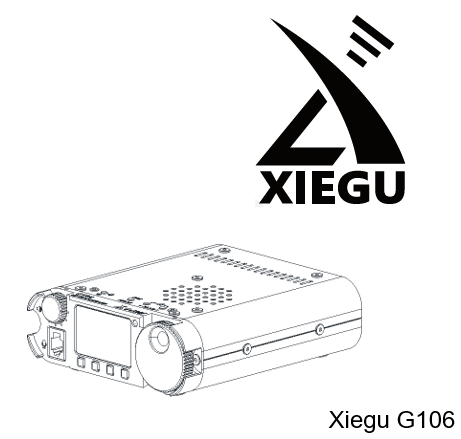 OK so I’m finally back home now. Here’s some neat things that are being down with this rig. Above my skill set but looks doable… 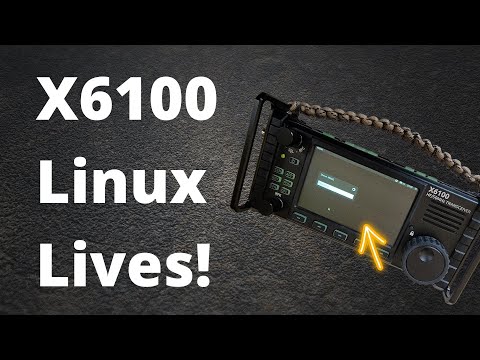 Here’s one with JS8 call running: 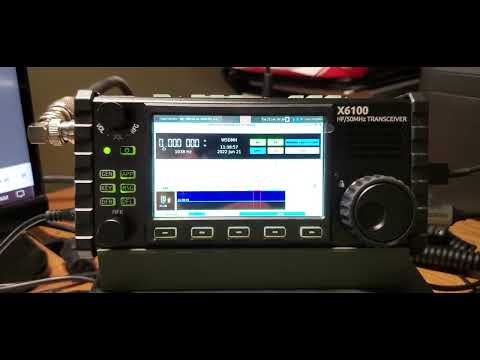 I had been watching KM9G’s youtube channels on their exploits on hacking the 6100 a few months back, but decided to go a different route and picked up the FX-4C to play with. Maybe should have waited

This is pretty awesome. One can go out in the field and operate digi modes without lugging around any extra equipment ie Computer etc etc…Pretty slick!

The “Holy grail” (IMHO) is to have a portable rig, that has the ability to run open source apps/programs without external “boxes” and to do that to a screen that is visible in sunlight.

I wonder if anyone is working on getting FreeDV (HF digital voice) into the 6100? It would seem to be an obvious candidate.