Having achieved the half-kilogram SOTA challenge, I realized the heaviest single thing I was carrying other than water, was the pack itself.

in the spirit of sharing ideas … Having gotten my SOTA equipment down to a pound (including mast). I have a ten ounce runner’s pack, still, the heaviest part of my carry is the pack itself. Goal; for shorter hikes (an hour or less each way), the packless carry.

While a figure-8 winder works well for end-fed antennas, including those with traps or links for multi-banding, it has a few slight drawbacks. It can unwind when I don’t want it to. It can tangle on brush while doing something else. It can tangle on “stuff” in the pack unless confined in its own sack, and it is too bulky to fit just in a pocket for a packless activation.

I took apart a Stanley 50 foot wind-up tape measure, one I happened to have that is thirty years old, and the tape so rusty that it broke. Inside I found a very simple wind-up hub. I tried winding the antenna on it, but because there is no spool, it soon had too much friction with the sides of the case to function.

So I fashioned plastic sides to complete the spool and confine the winding wire. It was not easy to cut out the concentric circles, and it was even harder to attach to the hub because as it turns out, epoxy doesn’t adhere to the plastic of the hub.

Still, I may have overcome that gluing problem, remains to be seen how well it will endure in use. Winding up is quick and kinkless.

The result is something that weighs almost exactly the same as the figure-8 wound antenna, two and a half ounces complete, but one fourth the size. Log, retractable earbuds, paddle, 250 mAH battery, 81:1 impedance transformer (no feedline needed), all attached to the MTR in one breast pocket, wind-up antenna in the other, water on a waist belt, giddy-up!

Hi Fred,
How about a picture of this new spool? And while you’re at it, please shoot a pic of your current kit. The more summits I do, the more I appreciate your drive for light weight!

Worked a treat but antenna tangles so, like you, considering a spool. I have a chalk line reel which I’ll press into action.

Without the 5m pole it’s only a couple of hundred grams.
Heavier setup is this: but more usually the ATS4 and full set of spares

I have a waxed jacket with a poachers pocket that will take the FT817. I have done some activations with just the rig with a telescopic whip for 2 metres, plus a bottle of water and a Mars bar in another pocket. It’s great for a nice long stroll and a casual activation, but for a more serious ascent and activation I take a sac full of gear! 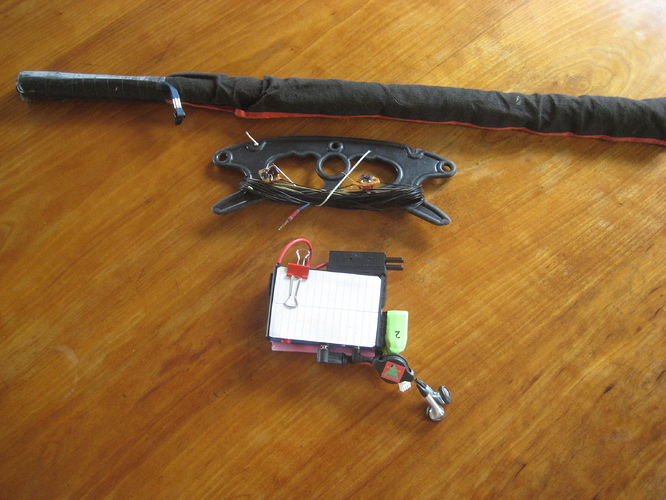 Fred is working on an embedded rig under his skin and an antenna through the inside of his pants and shirt such that when you come upon him on the summit all you will see is Fred facing the horizon and doing this funny wiggle with his right hand.

Fred is working on an embedded rig under his skin and an antenna through the inside of his pants and shirt such that when you come upon him on the summit all you will see is Fred facing the horizon and doing this funny wiggle with his right hand.

The prototype iambic key using clenching of the butt cheeks (left for dot, right for dash) is particularly innovative.