The Little and the Bad Fess HB/GR-117 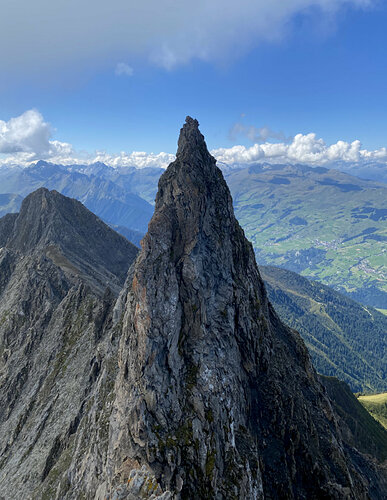 While looking for a summit not too far away from home that I hadn’t activated yet and that would be suitable to visit with my partner and perhaps some friends, I stumbled upon Piz Fess HB/GR-117. A nice official red (= medium difficulty) hiking trail, 1200 meters of ascent from the parking, 8 prior activations, 10 points – what could go wrong?

Except something on the map was strange. The hiking trail stops short of the SOTA summit, which appears to be in steep (> 45°) terrain according to the slope color coding of swisstopo. 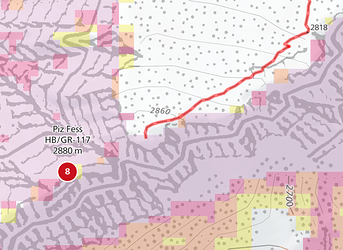 Searching the web for “Piz Fess” brought up pictures like the one at the beginning of this post. I was immediately hooked. It turns out that “fess” means “split” in the local Romansh language. Piz Fess is split into “Chli Fess” (Little Fess), where the hiking trail ends, and “Bös Fess” (Bad Fess), which is 7 meters higher and thus the main summit. In between the two, there is a gap about 40 meters deep (according to a guide book of the Swiss Alpine Club).

So it was clear that Piz Fess is not the casual hiking-with-friends activation that I was searching for. But I still wanted to activate it, properly. Equipped with a rope and some gear and accompanied by my partner, I hiked up from the quiet village of Tenna, passing wonderful alpine meadows mostly devoid of livestock. 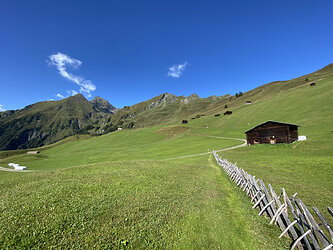 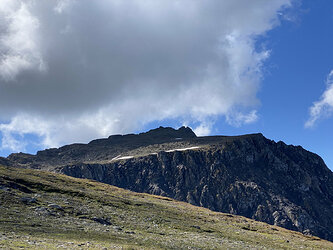 The trail was easy and well-trodden, and after about 2.5 hours, we reached the Chli Fess summit. My partner decided to stay there, while I contemplated whether to use the rope that I had brought to rappel straight down into the gap, or to climb down along the old fixed rope that had been installed there. I decided for the rappel, which turned out to be a good choice, as there were vertical and even slightly overhanging parts as well as loose rock. My 30 m rope was just long enough to get into easier terrain leading down into the gap.

I also measured the depth of the gap with the barometric sensor in my iPhone, and found 40 meters (measured from Chli Fess) to be correct. Between the gap and Bös Fess, the barometric measurement was 48 meters, also confirming that Bös Fess is indeed higher. 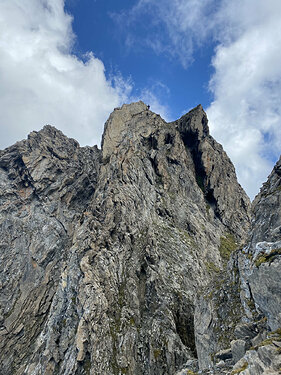 From the gap, I traversed the north face of Bös Fess on brittle ledges with moist gravel on them, ascended a little couloir on its western side and finally reached the summit via the south-west ridge. 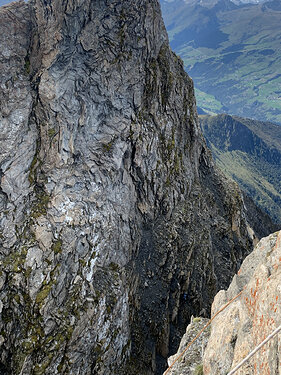 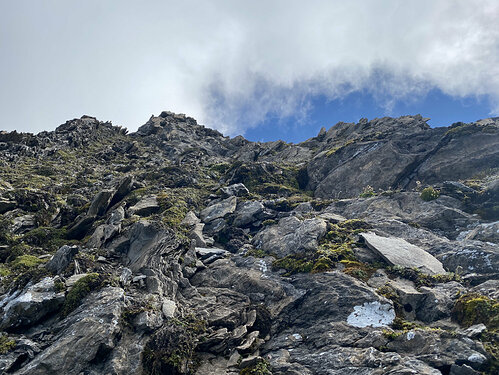 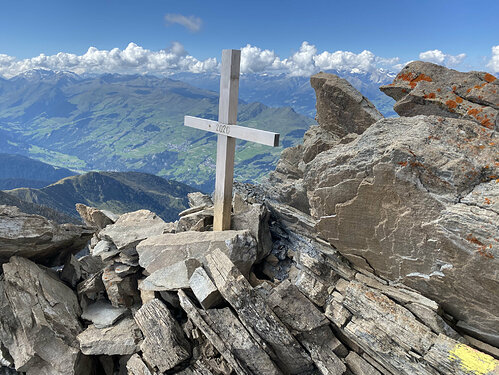 Older photos of Bös Fess on the web show a large summit cross. This has reportedly broken off (along with a part of the summit ridge) and crashed down the mountain in 2020. A new, smaller cross has since been placed on the summit, but is no longer visible from Chli Fess.

I proceeded with the activation, with my KX2 and unfortunately only an AX1 antenna – I hadn’t brought a mast as it was quite clear that there would be pretty little space on the summit. The total was 29 QSOs, and the bands didn’t seem to be in good shape. 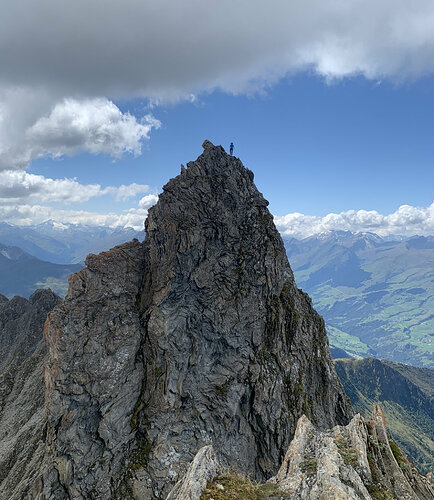 There was also a summit book from 2006 in very good condition. I could not find any entries from prior SOTA activators in it. It seems that this summit is mostly visited by a small group of locals. 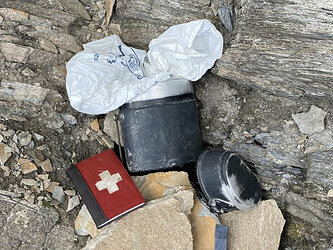 Soon enough it was time to rejoin my partner. I retraced my steps from Bös Fess to the gap, being very careful on the slippery and brittle ledges. To climb back to Chli Fess, I belayed myself on the fixed rope (which took a less direct route than my rappel) for some peace of mind. The short climb was relatively easy (~UIAA III), but with the loose rock, it seemed wise to have some sort of belay.

And that’s it for this little adventure in the transition zone between hiking and climbing. Now I’m looking forward to a nice and long SOTA autumn!

Great pictures! Thanks a lot for the report. Exciting to read. Wish you a successful SOTA autumn and I would be happy to hear you in a QSO.

My absolute pleasure to chase you on Thursday Manuel from such an awesome summit, together with all the other brave souls who were up a mountain (most fairly high up too!). I was only out of work for an hour or so at lunchtime using the FT-817, an RM Italy HLA-150 amp running at about 75 watts and the Super Antenna MP1. When I was checking the output of the ADIF transformer earlier I was amazed at the summit heights of all the activators I’d bagged. You helped me fix a bug in the software as you mentioned you were in a WWFF region as well. The locator for that region is quite vague which put you in a valley, so I fixed the code so SOTA locations take priority for multi-activity contacts.

Thank you so much for the report and the wonderful photos. It looked pretty awesome in Google Earth, even more so in reality! Also great to get HB9GKR/P on the first activation of TF/AL-108. He seemed to be doing well with S2S on 20m. 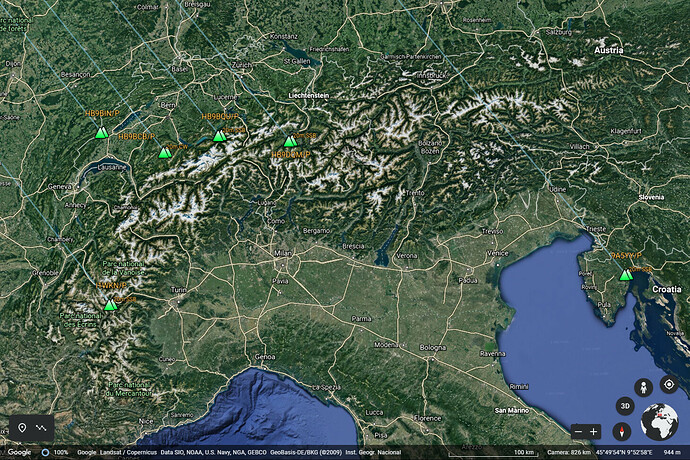 Many thanks for a brilliant report and photos Manuel. I monitored your frequency for some time and could tell that you were QRV, but you were in the noise at my QTH. I was hoping for your signal to improve, but unfortunately it did not happen.

Well done on activating such a special summit.

Hi Manuel, thanks for your activation report and great photos.

Amazing summit that needs a lot of skills to activate, well done!
Thanks also for the impressive images.

When looking at some maps, I’m just wondering if all previous activators realized that the real SOTA summit is the “bad” one

Hats off, Manuel, really impressive!
This kind summits are out of my reach but I do appreciate reading such stories.

Keep on doing so well and be careful to do some of the like for many years!
73 de Ignacio
P.s. thanks for today’s S2S, good ears!

great!!! What should I say else.
It gives me the heebie-jeebies imagine this summit would be my goal and I saw the situation. My only option would be to go away, absolutely to much for my limited potential.

Thanks for taking us to this crazy place, Manuel. And always happy to know you back safe and sound!

8 Hams have activated HB/GR-117 before Manuel did. After reading the brilliant report of Manuel I have serious doubts whether all these 8 activations are correct. If not, I hope the other activators will delete their activation.

Congratulations Manuel for that climb. The climb up to the actual summit looks a bit sketchy on the pictures. Grass and loose rocks or is that a false impression from the pictures?

Oh yes. And for the way back. Did you climb up using your rope for self- belaying . Or did you jumar up?

And btw. I guess someone with edit rights (@OE5HDX

) at the Openstreetmap project would need to fix that too: 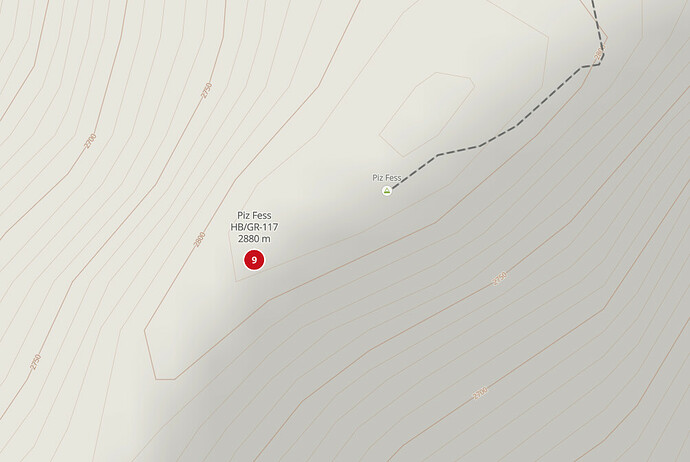 The summit marker at the end of the trail is therefor wrong and might have lead a wrong judgement of the situation. But I guess we will never know
Curious for any feedback on Jürgs post. But it looks like some the previous activatiors have not been active with SOTA since a while. .

First of all, thanks everyone for the kind replies!

The climb up to the actual summit looks a bit sketchy on the pictures. Grass and loose rocks or is that a false impression from the pictures?

Yes, plenty of loose rocks all around this summit (the green stuff is mostly moss). I’m now used to judging/testing all hand- and footholds after this season with several rarely visited “piles of rubble”

And for the way back. Did you climb up using your rope for self- belaying . Or did you jumar up?

I climbed up and just used the fixed rope for self-belaying.

And btw. I guess someone with edit rights (@OE5HDX

) at the Openstreetmap project would need to fix that too:

Good point, I hadn’t noticed (as I always use SOTLAS with swisstopo maps for HB). As an occasional OSM contributor, I have taken the liberty to fix this: 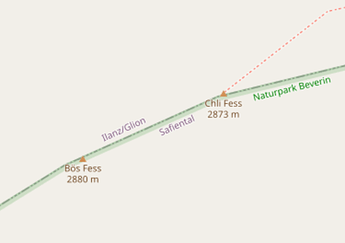 It will take a few months until the change appears on SOTLAS (I only regenerate the vector tiles from OpenMapTiles once a year as it takes about 20 days on a fast machine).