The hills were alive with the sound of radios...

It was good to be on the mountains of Mid and South Wales today as there were no fewer than 9 Activators on various summits in the locality. At one time ‘Summit to Summit’ calls were flying around like confetti on VHF and UHF. A ‘hint’ of good weather had brought out myself Allan GW4VPX/p, Viki MW6BWA/p, Rod MW0JLA/p, John MW0XOT/p, Paul M0PLA/p on the G side of GW/SW-041, Philip GW4HQB/p, Mike GW7HEM/p, Richard 2W0XRB/p with Andrew MW1CJE/p.

The 'hint’ of good weather never really reached me on Pen y Garn GW/MW-004 with the wind bending my shortened fishing pole nevertheless 13-VHF/UHF, 24-60m, 13-80m and 11 s2s contacts made my log. I was glad of the cairn today and take my hat off to those on the more exposed summits…well done everybody…great day.

Report on my blog along with another 15 (EI and G/DC activations) https://gw4vpx.blogspot.com/ 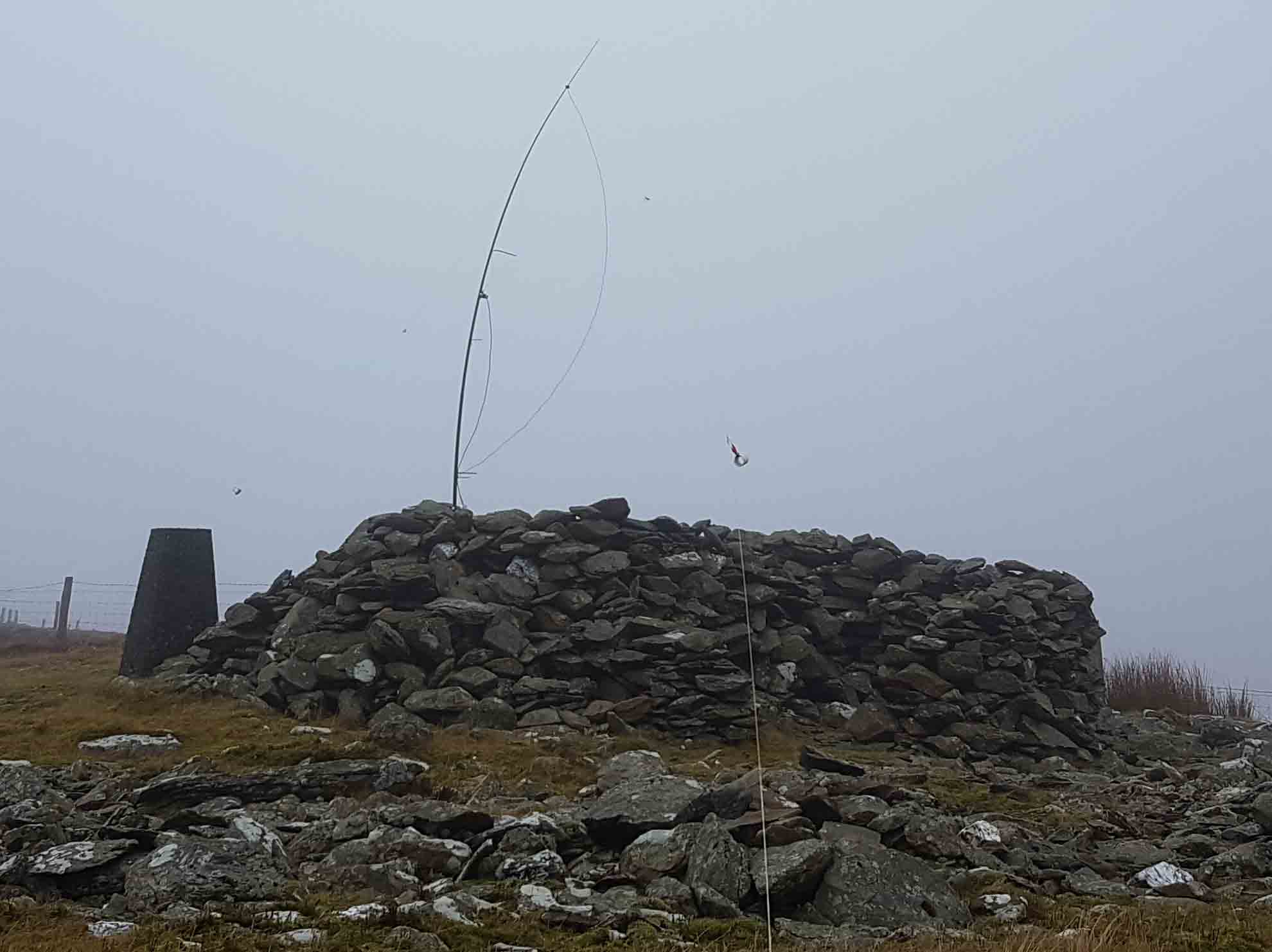 Hi Allan
It was great to catch you today. It wasn’t too cold it was just the wind. Very very strong wind indeed.
I managed 3 S2S’s, yourself, Vicki and Rod. Them managed a further 3 summit’s on the way home driving. I wish I had stayed in the summit longer but I had already been there 2 hours and still had to descend and drive 2 hours plus back to Telford.

Well done Paul…I was thinking of you as it is really exposed on that summit. Yes, 2 hours was enough for me and I was in a cairn

73 and catch you from Cadair Berwyn maybe?

Hi Allan,
Thanks for the contacts yesterday and thanks to all the other activators. Richard and I had a great walk around, no activator points for me unfortunately as I had already done them all earlier in the year but I managed to add 9 S2S contacts so thanks to everyone for a great day out.
73 Andrew - M1CJE

Great to get you both in my log and I think it’s the first time for me to speak to Richard s2s? Keep up the good work and catch you soon from another summit. Happy Christmas to you both and your families.

Sorry to have missed you on Saturday, I’m sure we’ll catch up soon in the new year. Happy Christmas!

I heard you Mike 5/9…problem was I had a little bit of a pile-up and thought you would still be there when I had finished…not to be. I called you on .500 but you had gone

Merry Christmas to you and the family ( and Meg).

When we chose to Alert for 22nd it seemed to be the only decent day in prospect but as SW-001 has been in cloud almost continuously for days we decided to go for a more modest summit than SW-003 (still unactivated this year) and give Beacon Hill a go - 3 points for me, 5 for Viki with High Vinalls on the (rather extended) way home. We were really pleased to discover by Saturday morning extensive alerts around SW & MW - prospect of lots of s2s and with chasing from home severely limited by noise (only 24 chaser points in the previous fortnight) the possibility of gaining that many in one day.
It started really well with 18 points in the first 18 minutes on the summit while still erecting the HF aerial

many thanks to GW4VPX, M0PLA and GW7HEM. After closing down on HF another three s2s yielded 12 more; again many thanks to MW0XOT, 2W0XRB (first contact logged with Richard, at least with that callsign), and GW4HQB.
Apologies to my HF contacts and potential contacts - I was suffering from severe crackly noise which made hearing a whole over very difficult and resulted in much repetition of callsigns. My thanks to very patient chasers; 19 contacts. The problem seemed to be across bands and time was pressing (and it was surprisingly cold in the wind) so no 80m - sorry!

From WB-012, where I discovered on setting up that the feeder and one leg of the dipole were not fully in contact. I think this might explain the crackling noise on the previous summit. An attempt to restore contact appeared to be successful but yielded only two contacts before I packed it in and went for 2m FM instead, gaining four s2s and, as everyone else had also changed summit, another 8 chaser points from MW0XOT, 2W0XRB and G7HEM. Thank you all.

Merry Christmas - and hope to catch you from NW at the weekend.
73,
Rod

Thanks for the s2s Allan and all the others who were out but there is one contact you obviously missed that came when my mast was down on Beacon Hill GW/MW-009 and I was helping MW0JLA wind up the guys. On the VX7 handy with stick aerial Phil GW4HQB/p boomed in from nearby Pegwyn Mawr on 2m, QSYing to 433.475 we completed a 70cm contact when a faint call sign was discerned. Phil took it first as I was in difficulties so I trotted back to the small summit mound where I had another listen. Soon the last s2s from that hill was in the bag - M1EYP/p on SP-012 (The Cloud - where else) on 54/57 - not bad for a handy with a helical stick aerial. Well done, Tom.

However I think my prize for the day goes to the those with the energy and fitness to accomplish Waun Fach (SW-001) followed by Mynydd Troed and Mynydd Llangorse (SW-009 and 015) done by Andrew MW1CJE and 2W0XRB -sorry we missed you on Troed but we were traveling east to Ludlow at the time … but the winner was Mike, GW7HEM who polished off Pen y Fan and Fan Fawr (GW/SW001 and 005 - which is a long day by our standards) and then added Mynydd Troed and Mynydd Llangorse as a sort of ‘dessert’. We got the s2s from High Vinnalls (G/WB-012) to Troed as we were packing up so it must have been rather ‘gloomy’ as he reached Llangorse at the very least. Hope it went well as 2m fm from there can be a bit of a challenge. Just tell me something, Mike, is the dog still with you and which of you was racing ahead on the stagger up the last hill?? (BTW my apologies for the late reply but a certain large turkey got in the way!)

Best wishes to all for many more encounters on the airwaves in 2019. The current forecast for our stay in Snowdonia starting on Saturday can be summarised as drizzle and fog and that is for where we are staying and not even the summits!!
Viki M6BWA

Best wishes to all for many more encounters on the airwaves in 2019. The current forecast for our stay in Snowdonia starting on Saturday can be summarised as drizzle and fog and that is for where we are staying and not even the summits!!

Sad only to have chased you four times this year, and this time we’ll be heading south as you come north! Hope it clears up for you. G4TJC is about to reach the summit of GW/NW-001 as I type, and he has a view! Clouds billowing, but better than promised.

is the dog still with you and which of you was racing ahead on the stagger up the last hill??

Meg’s fitness level eclipses mine by quite some way and about the only time she isn’t in front is on some of the Snowdonian scrambles. Hope to catch you both on the air early next year!

Another good weekend in Wales… Yesterday was no exception and was reminiscent of some 8 years ago when Summit to Summits would come in thick and fast on a regular basis. I had only just arrived at the summit of Fan Brycheiniog GW/SW-003 and soon had 5 Welsh summits in the log using my Yaesu FT270 (2M FM) handheld…it was a bit of a scramble to get the log book out of the rucksack to record the contacts. Something like 8 Welsh summits were being activated simultaneously in that first half hour of my arrival. It’s interesting to note that many of the activators were taking advantage of the fine weather to amass some large valuable activation and winter bonus points…there are new Mountain Goats on the horizon. Thanks to all the chasers many of whom were a bit confused at one time with all the radio chatter and frequency jumping 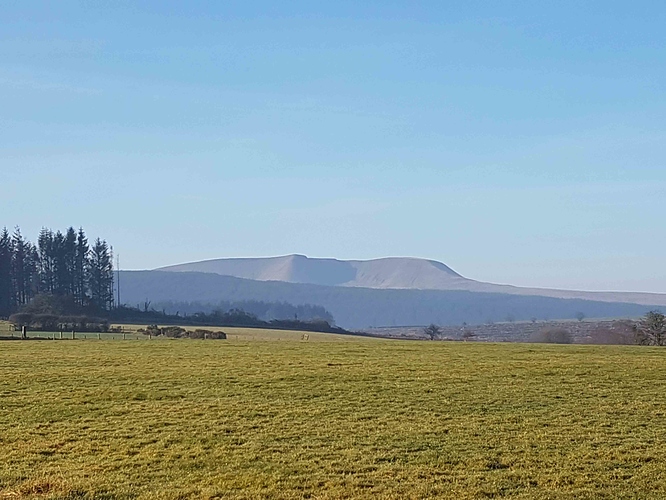 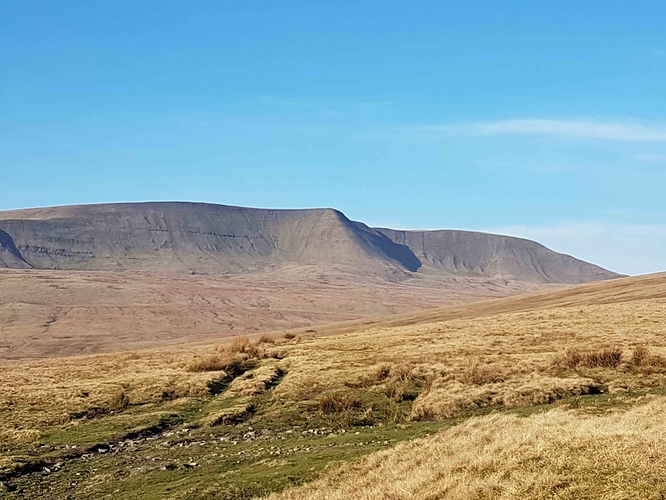 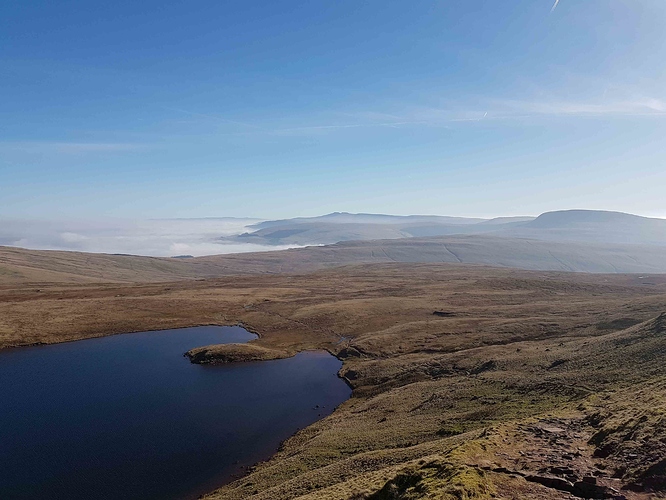 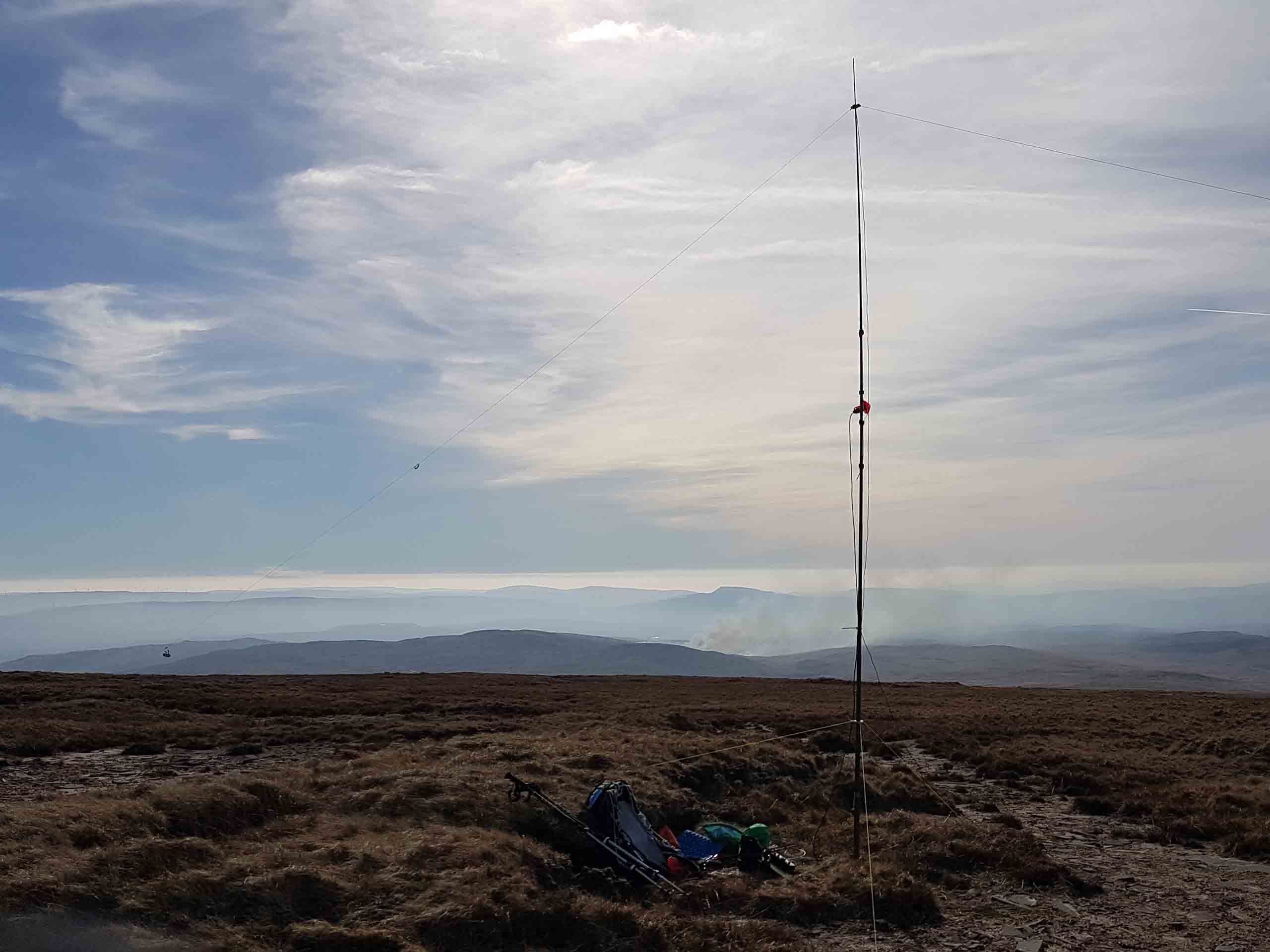 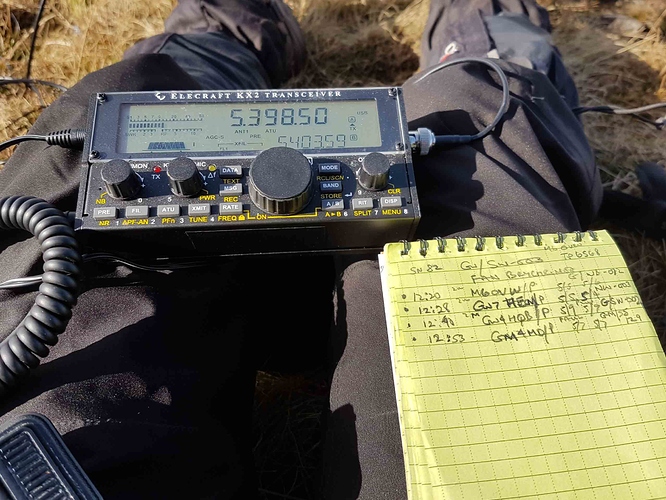 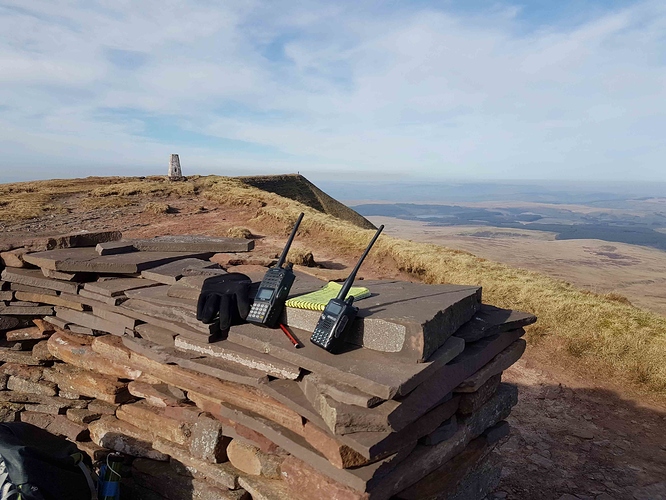 Yes, an incredible day for radio.

Sat in the smaller summit shelter my thermometer read 12°C in the shade, so most of my layers stayed in the bag. Perhaps this was the season’s last outing with lined trousers!

I didn’t rack up so many S2S as Allan, but still it was 51 points, including the full set of Glyderau! 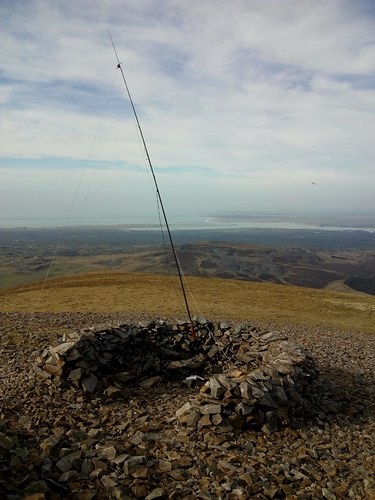 My legs are tired today! I managed Tryfan, Glyder Fawr and Y Garn (GW/NW-006, 003, 004) and looked at, thought about and dismissed the idea of a 4th one (Elidir Fawr NW-005) which I think was the correct decision. Many thanks to all the chasers and S2S. It was very busy on 2m and finding a clear spot was a challenge.

On the way towards Tryfan: 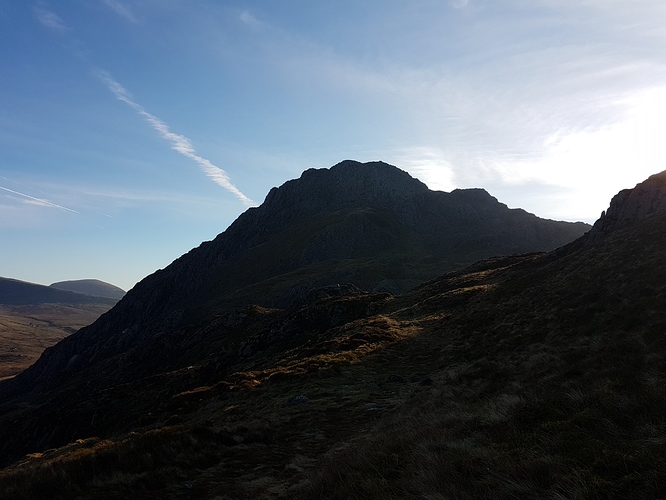 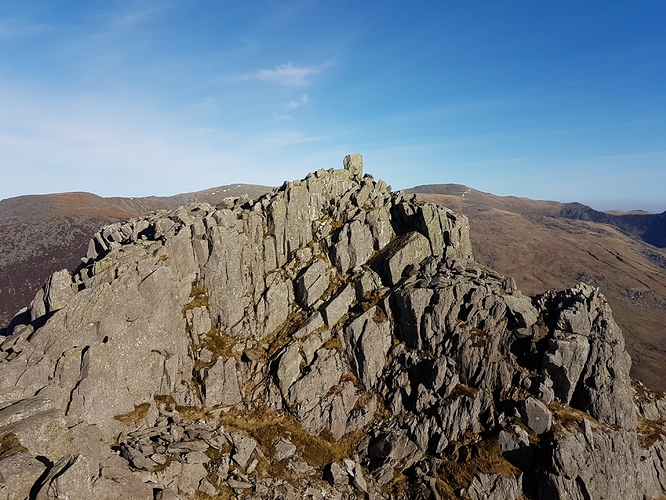 The other summits in view: 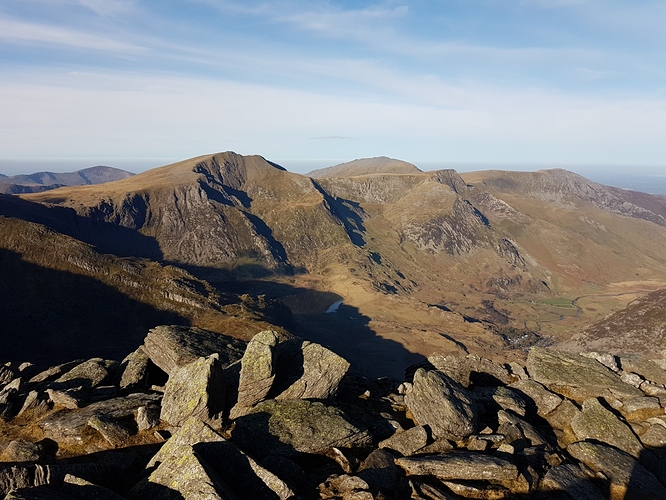 A few others in the area for another day: 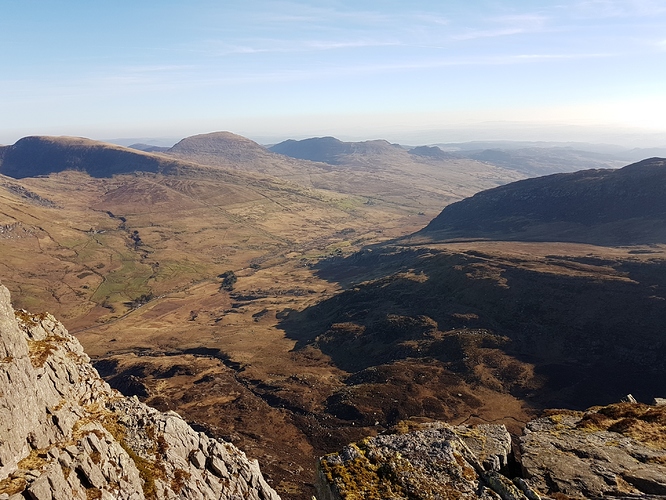 On the way to Glyder Fawr with Snowdon in the background: 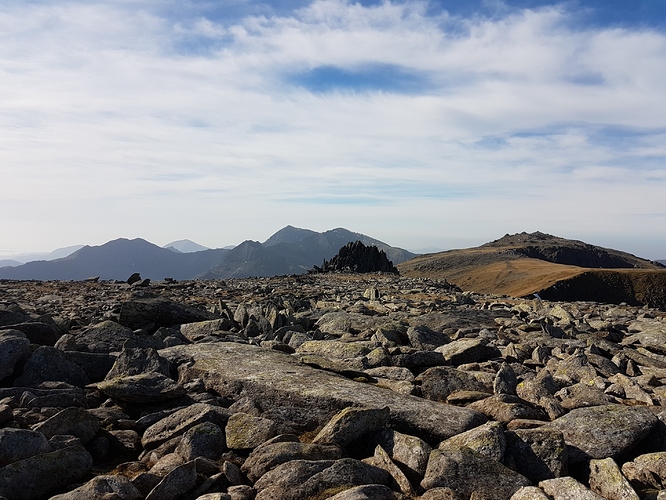 Looking back at Tryfan from Y Garn, and even found some remaining snow: 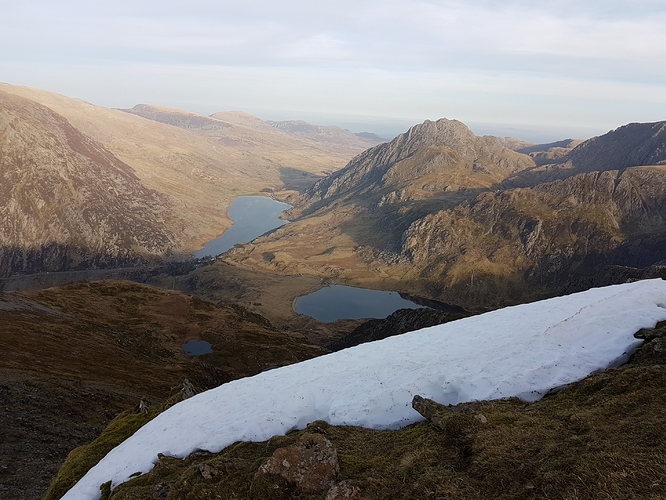 Spectacular photos and yes, it was v busy on air. Thank you for the S2S and thank you for sharing the pics! 73 de MW0VPS

Nice photos Mike. You must have been just behind me. My last QSO from Y Garn was at 0940 and Glyder Fawr at 1136. Brilliant day. Managed 5 summit to summits. Thanks to all chasers.
John G(W)4TQE

Yes, just missed you! My first one from Glyder Fawr was less than an hour later at 1228.