What was the hardest point (or hardest peak per-point) you’ve ever earned?

I’m just back from a trip to ZL3/FL-815 – a one-pointer on Resolution Island in the Dusky Sound – part of the Fiordland World Heritage Area & National Park. The trip in would typically require a 30km boat ride across Lake Manapouri to the hydro power plant at West Arm, a 30km 2-4 day trip across the Southern Alps over the notorious Dusky Track (yes it does really take most people 4 days to cover the 30km), a 30km paddle down Dusky Sound, and then a scrub-bash to the summit. 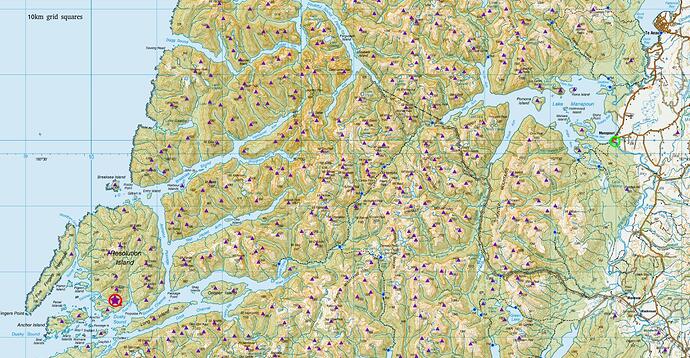 Thankfully I was part of a volunteer group out to run traplines for exotic (i.e. non-native) predators on the island. We got helicoptered over the Alps, landed on the deck of a boat, and dropped off at the island for 3 days of work. After a day of paddling the coastline servicing coastal traps, and another day scrambling over the interior, my allotted work was done and I was grateful to have a half-day spare to activate one of the three SOTA summits in the area we were camped.

A cut/marked trapline leads to 500m NE of the summit, leaving an easy 500m stroll / 200m climb to the activation zone.

500m of bluffs and scrub lie east of the peak, with no help from the usual deer-trails, as (exotic) deer are also controlled on the island. The last 500m took almost an hour.

11 contacts all-up. Most of them VKs, and most of those sounding as if they were sitting next to me. 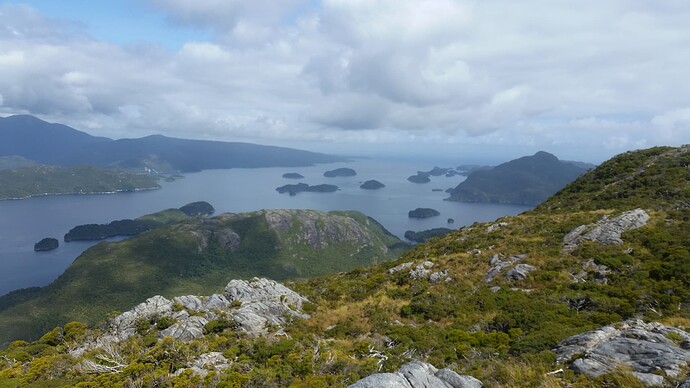 All that remained was getting home. Sadly the supplied transport was one-way only, and the return trip was self-powered. So it is now 3 days later I’m finally sitting back in my caravan in Te Anau and enjoying a cold beer and a hot shower, the pack-raft drying in the sun, boots and clothing confined to ‘outside’ until it can be thoroughly washed & disinfected!

What was the hardest point (or hardest peak per-point) you’ve ever earned?

(realise that’s been asked before, but that was in '07)

What a great effort on your part Matt. Well done and cheers to you.

Nothing that hard Matt my hardest thing is driving hundreds of km to reach the summit areas. My summits are mostly 4 pointers in the 600m asl level and not more than 3 to 4 km hike ups once the driving and gate opening is done. It was really nice to hear you on this summit too and sometimes I don’t hear you at all on ssb. That’s a big effort though for one point but SOTA generally is not an easy pass time for activators.
Regards
Ian vk5cz …

thanks for your report of this challenging activation. Brings back a lot of memories of my visit to Te Anau and Milford Sound some years ago. It looks like there are still a lot of summits for you to explore in the Fjordland NP 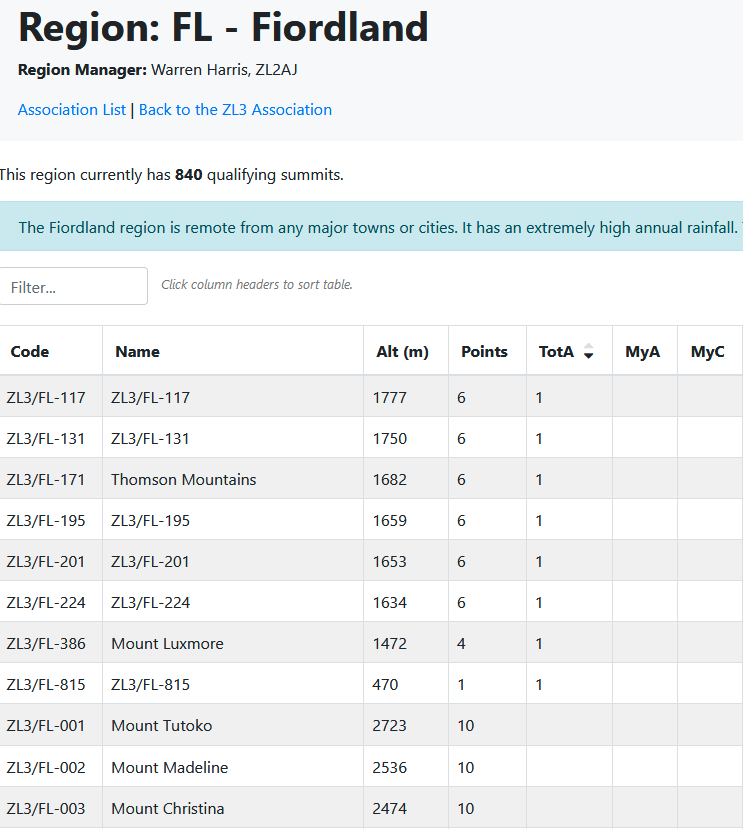 This is really an impressive report. And I have been to this area myself, but that was before my SOTA time. So, at that time I didn’t know anything about SOTA, but your report brings up wonderful memories of our trip across lake Manapouri to the power station, then by bus over the little pass to doubtful sound, and the boat trip on doubtful sound to the open sea. I do hope to be able to come back sometime and activate a couple of ZL SOTAs.
As for my hardest points: Nothing like this here in Switzerland, for me anyway. Just hikes of (occasionally) several hours, partially on snowshoes, and back the same day.

I do hope to be able do a S2S with ZL sometime; that indeed would be a highlight for me.

Mine was certainly nothing that hard, but I decided to try to bag Proffit (W0M/SF-004) and Taum Sauk (W0M/SF-001) in the same day. I figured I’d start at Taum Sauk, hike to Proffit, activate it first, then hike back to Taum Sauk and activate it at the end of the day.

What I didn’t know, is how tough the hiking is between the two. I’ve done Proffit from the “back way” (about 22 km round-trip), which is long, but not difficult hiking. This new route was quite difficult (for me). By the time I’d completed the 27 km round-trip hike, I was too exhausted to activate Taum Sauk. I could barely crawl into my truck and drive home.

But, I’m an old guy. I wish I’d started doing this 20 years ago when I was a not-quite-so-old guy!

Good on you for activating that peak!

Your story reminds me of the rock-climbing days in my youth. We used to drive down to either Stanage or the indoor walls in Sheffield via winding country roads in my old pre-power-steering Hillman super minx and climb until we could no longer lift our arms. Have a break, recover and climb again until we could climb no more.

Then I had the task of driving back along those winding roads with arms and hands I could barely hold the wheel with. Recall having to clamp one hand over the other to grip, and get my body weight behind attempts to turn the wheel!

Interesting stats. I note that 12 months ago the total activated FL peaks was ‘1’ - (Chris @ZL4RA being the pioneer!). So we’re making progress - 800% increase in just 12 months!

How long did it take y’all to paddle the pack raft back to Supper cove? That’s a long way on a boat that isn’t pointy!

BTW, the two portages I was banging on about were:
Dagg Sound and Resolution Is

Yes, made it up Mt Luxmore tuesday morning, wind was err, fresh, and got VKs on 20m. It wasn’t raining where we were, and I didn’t see any rain looking up the dusky track, although that could have been because it was black beyond West Arm.

Highlight was Brody’s reply to the question of what I was fishing for with my rod: “Single Side Bass”

@zl1thh I’m guilty of oversimplifying the trip out to Supper Cove. The bulk of the party had a boat organised to Fanny Bay, half way down Dusky Sound on the opposite side to Resolution & Supper Cove. From there they were (and still are, as far as I know) looking for a route out over the Heath Mountains to Lake Roe and thence out via Lake Monowai.

Previous trips have packrafted out to Supper Cove from Resolution - a full day’s paddling, followed by 2 days walking to West Arm. My times between Fanny Bay and Supper Cove are 4 hours with flat conditions and a slight tail wind.

I am still impressed by your coastal kayak down from Milford sound. Those can be big seas! The more usual packrafting route to Doubtful from the southern sounds appears to be Jaquery Pass (position shown wrongly on the topomap) - avoiding the ocean segments you mentioned, though I don’t think you’d be lugging a rigid kayak over that!