I’m not sure if this is the right category but here goes.

I blame Jack GM4COX. We were sat at the GM Microwave Round Table last November when a 13cms transverter was shown by G4BAO I think. Jack said after that he would buy one if I would. So I said OK it’s less than £200 and we would put some much need activity on the band. From there like acorns, things grew. Sometime last March we ordered 7 units from SG-Lab in Bulgaria and about 5 days later a box filled with shiny toys appeared.

The following people had their arms twisted in to going on 13cms, James MM0GLM, Iain MM3WJZ, Barry GM4TOE plus myself and Jack. A further 2 units went to ED GM3SBC and Chris GM4YLN, longstanding uwavers but not into SOTA. Barry collected his unit at the MT meet and Jack collected the others last week. So everyone now has their unit.

You drive them with 0.5 to 5W on 432MHz and the signal comes out on 2320MHZ at 2W or so. The LO is programmable so you can work the 2300MHz band (you need a NoV) or 2320 or higher. There is a viable RF Vox or hard switching. Combined or separate RX/TX paths and you can drive them with 10MHz from a GPS/Rubidium standard.

Barry was down for the new rally in Glasgow this weekend and wanted to bag a summit on the way. He selected Carleatheran SS-175 in the Gargunnock Hills. That is LOS to Cairnpapple Hill SS-254 about 25mins from my QTH. So a sched was arranged. Jack was busy earlier or he would have gone out too.

It takes almost 5mins to get to the trig on Cairnpapple from the car park. I had the transverter plus all the HF gear. In the end I spent all my time on 13cms or 2m. It was windy and the wind was from the NE so it whilst it was a beautifully sunny day it was baltic cold! I wandered up having spoken to Barry on 2.1GHz (3G) and he said he was running late due to roadworks. I had a tune about on 2m and could hear Steve MM0XPZ from Hill of Stake SS-155. Now I activated that about 3 weeks ago so an S2S meant not only S2S points but a complete as well. Steve was duly bagged. I then had a long chat with Jack on 2m whilst checking I could hear GB3CSB the local 13cms beacon. Hear it? It was sooooo very loud. Now due to the LO set up options I made sure with Jack that we knew where 2320.200 was on our 817s. Jack has his set so 434.2 in is 2320.200 out, I have mine set so 432.2 in is 2320.200 out. It doesn’t matter as long as you know what to use to get the output where you want.

On to 13cms and a quick tweak and there was Jack peaking 57 on 2320.200MHz. It’s a non-LOS path just grazing a few hills and with the little antennas and the fact Jack’s unit was inside, we were both happy with the results. I tuned about after finishing with Jack whilst waiting for Barry to appear. I managed a quick QSO with Ken GM0AXY and then with Steve MM0XPZ’s help completed another S2S with Robin GM7PKT who was out on Troweir SS-257 near Girvan. It was a struggle using just the rubber duck, but we managed 41 both ways over an obstructed 108km path. Troweir is due for retirement as soon as I have activated it and having now chased it, I can retire it having completed it and S2S’d it as well. AM’s prerogative is what you call that!

Sorry no pics of the setup. In the excitement of working 2 QSOs on a new band, I forgot to take any. D’Oh! Now to get a better antenna made and for my 13cms partners in crimes to plan when we will all be out at the same time so we can all qualify our hills with 13cms S2S contacts.

See it was all Jack’s fault…

And yes I’m proud of it! And all with a 4el PCB Yagi’s (courtesy of SG Labs) held in our hands. And more to follow using the 4el to couple into a multi-element pipe yagi (my latest thoughts - we’ll see how it turns out).

Hi Jack, I have thought of trying that with the 23cm version, haven’t progressed to the bench yet, though.

The SG Labs 23cm transverter has a Molex connector inside the box, which provides an analogue forward / reverse power indication (does the 13cm version have this too?)

I found it very useful when hastily connecting mine to a power meter via a couple of inter-series adaptors, and not getting the result I expected; it reminded me how critical things are at very short wavelengths!

Could be useful for setting up antennas too.

Good to hear of a successful Extravaganza, I’ll be interested to hear how you all get on…

Yes the same connector exists on the 13cms unit. I hadn’t noticed that till you wrote about it. We have an HP/Agilent VNA that goes to about 12GHz ISTR at the club so I was going to use that for antenna work but knowing there is a relative indication from the unit will be useful.

Hi chaps - I’ve just been testing out my 13cm transverter and it still appears to work. It’s similar (or not a lot more) power to your SG-Lab transverters so should be nicely compatible - I use a 12-ele DL6WU homebrew antenna (http://www.marwynandjohn.org.uk/GM8OTI/antennas.html). I used to use it with 12V SLABs but it seems to work OK with 11.4V LiPos - the Tx/Rx requirements on the tvtr board are 8V and 5V, and the PA runs nominally on 24V but works OK with less.

Don’t forget the restrictions on use in “daylight hours on business days” around St Kilda (actually affects most of the western isles), Aberporth (all of west Wales) and Boscombe Down for 2310-2350MHz. We should be OK I would have thought.

I’ll try to keep aware of when you’re next planning to be active on 13cm and I’ll try to get out if I’m around. Even if I’m not on a summit I could help qualify you entirely on 13cm!

I was playing with mine last night using GB3CSB and I couldn’t hear it. Spent about 10mins checking things till I realised the (metal) Venetian Blind in the shack was down. The actual blind was adjusted so you could see through it, i.e. the individual elements were horizontal with about 1cm between them and the light could pass. But not 13cms. I raised the blind and there was the beacon. I’m sure we could use this screen effect to enable microwave ovens to have a window in the door so you can watch things being heated!

Just had a quick check in case GB3CSB is stronger here than it used to be but it ain’t - can’t hear it from home (but then I can hear very little from home!). Glad to know CSB is still working OK, it’s such a useful set of signals.

Good to hear from you John and your input and guidance (certainly for me a ‘newbie’ on 13cms).

And, I am fortunate, David’s (GM6BIG) beacon comes romping into my shack at 58 with the 4el SG PCB, and of course 59+ when I hold the 4el out the shack window. All great for some future aerial developments.

Keep and eye on the Alerts as well emails that we have been asked to send to specific amateurs that have been asked to I/we are heading out. If you are interested in being added to the list, please Email and I will circulate around the rest of the gang.

13cms - GM/VK? - now that would be something (satellites excluded). Sure I just saw a flying pig

Anyway Jack’s sterling work in recruiting more willing willing SOTA microwavers has produced 1 more definite and 1 probably. Not bad as it’s only a week since we had 3 units on the air.

Meant to reply to you on your interest and as to what we are about on 13cms.

I have been compiling a email listing of interested parties - SOTA and non SOTA. If you want I could add your email address to the list? Just email to gm4cox@yahoo.co.uk.

Well a bit of altitude makes a big difference. I’ve just been out with the 13cm gear to check the receiver is still OK (it’s not been used for a few years). Less than 15 minutes walk from home, including 3 minutes up the path onto the Braid Hills, and - excellent - the gear still works. GB3CSB at S7 from about 52km. Whereas from home - not a sausage.

I even did a bit of video in my enthusiasm: https://youtu.be/ayLWDJU7u08

Look forward to working some of you soon.

Good one John and the that beacon sure sounds familiar

And, interesting on your yagi design using plastic tube. I have a similar idea, but I am going to use the 4el SG PCB Yagi as the initial driver coupling into the 5th, 6th, etc, director of the pipe yagi. The 4 ele can stand on it’s own - so-to-speak, or clips into the yagi for additional gain.

Does your directors taper (now I’m not insinuating here that this is an effect of over boozing)?

“Does your directors taper (now I’m not insinuating here that this is an effect of over boozing)?”

Yes indeedy - see http://www.vk5dj.com/yagi.html which is how I got all my dimensions

Very interesting. I’ll investigate the application further and let you how I fare.

PS: ABW - Hope to be out next Tuesday 23rd from a Summit (Microwave Activity Night) to test out new yagi?

I was going down Langholm way to clean up more unqiues. My target of Blackwood Hill (Arnton Fell) SS-199 was not LOS but may have worked. I was going to nip up Peel Fell which is LOS and then would get to operate from a new DXCC on 13cms. However, I have just checked the forecast and it’s complete mince and pish down there. So I will nip up something that is predicted to be dry, Tinto. That’s LOS to East Lomond over 78km and would get me up to the next level on the distance award. Sorry only 25kms to Cairn Table but LOS. It’s 75km to Criffel but passes over high ground in the near of Ballencleuch Law and Queensberry, Gana Hill to be exact.

Can I make a better antenna between then and now… 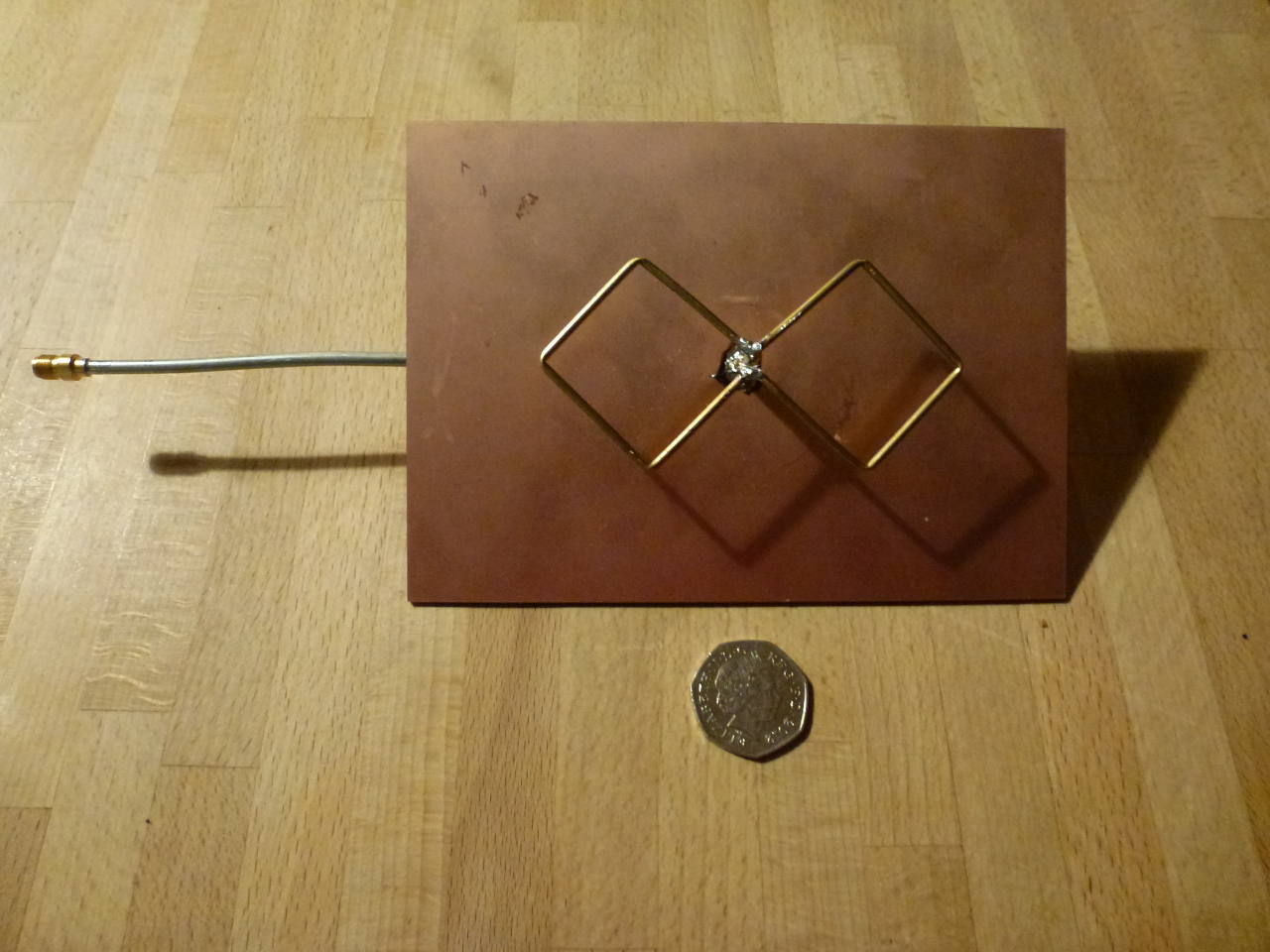 GB3CSB sounds stronger and this is much more directional. Match looks to be better than the PCB as the LED is much less orange.

That one is very similar to my feed for my 2m dish! It works very well.