That first notch in the SOTA bed head. At last

Around the time I started to look for a club where I could study for my foundation ticket in late 2012 I was loaned the July 2011 RadCom and on page 50 there was an article about something called Summits On The Air. My attention was grabbed. As a few months turned into a couple of years and I started to gather a small collection of licences that SOTA thing kept nagging at me, questions were asked of folk and plans were discussed many times but never came of anything.

At the end of 2014 I passed the advanced exam and three weeks later stepped off a pavement onto black ice and destroyed the cartilage in my right knee. After that SOTA stood for stairs on tha’ a**e for a good many months until I got the required op that was supposed to fix everything, it didn’t.

However, it’s hard to keep a good idiot down and by the time July 2015 came round I’d put together everything I figured I’d need and as we were heading for the Isle of Man and the most southerly SOTA summit (Mull Hill) is just 2 miles from my in-laws front gate it had to be done. (Bradda is less than a mile away as it happens but Lou (2E0LCZ) refused to give me a piggyback up there).

One of the many things I hadn’t factored into the whole experience was the wind coming off the Irish Sea and adding to the fun I hadn’t actually tried setting up my gear prior to this first activation attempt. I also learned the value of self-spotting as I called into the ether in vain; the only consolation was making my first summit to summit contact as I spun the dial up and down before finally packing up.

The second attempted activation didn’t go any better due to an unplanned trip back to the little island because of a family illness. I didn’t get home until the evening of the 27th about 36 hours before I’d planned to go up to G/TW-005 so as a result of pitifully poor preparation we got painfully poor performance. The weather wasn’t good on the 29th October last year as a number of folk will remember so once again I failed to get that first point but again came away with a summit to summit contact. Sodden but not disheartened.

Today it all fell into place, the weather was kind, I knew how the kit worked and I had a cell phone signal and SOTAWatch2 bookmarked on the phone. Seven cracking contacts on 40 metres (one of them being another summit to summit contact) and I walked away with that first gloriously magnificent point, finally. Then to round the whole experience off I met Gerald M0WML who had come over to activate the hill as he was in the vicinity.
Now it’s time to reassess and have another look at the gear and how it’s carried as I’d like to do more, otherwise it’ll be late 2117 before I get that first 100 points.

Now does anyone know anything about knees? 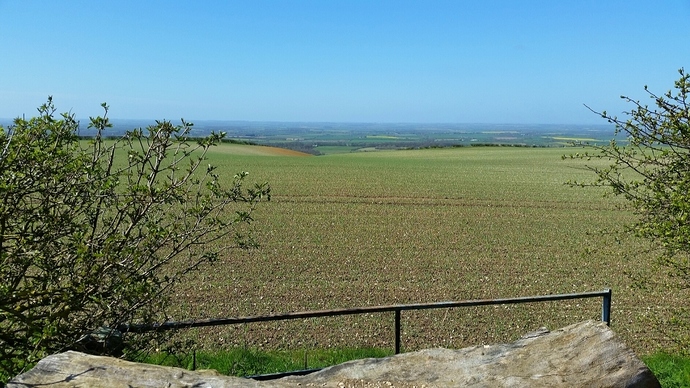 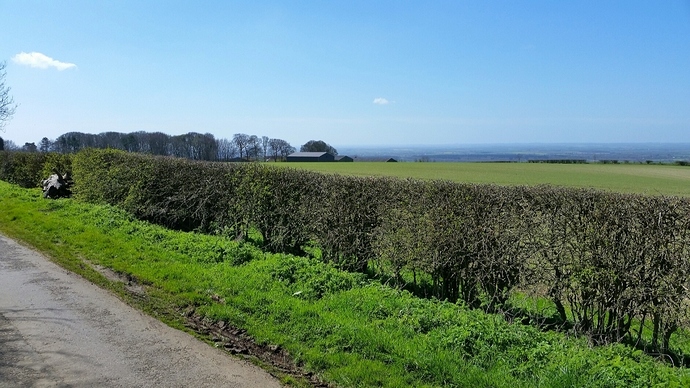 I don’t know nothing about knees but i really like your description of perseverance and addictivation
Keep on!

Hope your knee would be ok soon.

Well done on hanging in there Simon! There are a few easier summits around, not sure where you are located but G/TW-004 comes to mind. It’s interesting that on the first two attempts you activated the summits with S2S contacts but didn’t get the required 4 contacts to get the points. (If you had realised) you could have asked the other summit station to spot you say 10 KHz up from where you made the contact with him/her.

Again well done and welcome to the activator squad.

Well done Simon. As a fellow knee sufferer after a life-time of abuse in sport and at work I hope you manage to get it fixed. I tried a walking pole last time which does give some help (particularly on big steps down).

Brilliant Pedro, what a wonderful word! Sums it up perfectly

What a interesting story and thanks for sharing.

And well done on collecting your first points towards your goat.

Good to make contact on that day and also hear you work your first S2S as well.
But that did tickle me when another activator popped up on same Sota and when i spoke to him , he mentioned he had passed you and conditions had changed for better. But still worked him as yet don;t gain any points for second activator on same hill, on same day but end of day give 2nd op the support to make the journey worth while.

So glad a few more came up and worked you station with the wonky knee.

My knees when at work would give me grief after doing more than 60 miles in the tranny van and have to get out and stretch me legs to ease off the pain for minute or two before carrying on but when on me motor cycle no effect on knees.

SOTA activations get much easier as experience is gained.

I’m not at all squeamish, but this reflector is open to all and I think maybe your language would benefit from being a bit milder!

Wishing you more success in the future.

Thank you for all your replies gentlemen. A few kind words of encouragement go a long way.

Karl, my initial knee problems (plus a number of others) stem from a run in with a truck just after having parted company with a motorcycle 30 odd years ago - the tranny van I think I could manage.

Andy, walking poles are at the top of my shopping list - I find the down part much harder then the up bit too.

Motorcycles: great fun until they kill you! Walking poles will help a big deal as not only can you spread your weight onto 4 points but you can ensure you don’t need to twist your knee whilst under load.

Well it’s not a long trip, up through North Lincolnshire, over the Humber Bridge and on up to G/TW-004 Garrowby Hill (not sure why it’s called Bishop Wilton Wold in SOTA, all locals know it as Garrowby Hill (I’m originally from Hull, so East Yorkshie is my county)). Should be a nice drive in Spring / Summer and 1Hr at the most I would expect (as long as there are no traffic delays, road works etc).

Walking poles are quite useful to hold the ends of a dipole or the counterpoise of a vertical antenna off the ground on a summit.

(I’m originally from Hull, so East Yorkshire is my county)

Likewise - I spent my first five years on this planet living just off Holderness Road. Then more years than I care to remember living in Hornsea.

My wife has family (and I did have) close to that part of the county (Yorkshire Wolds) so I know the drive fairly well but to Garrowby Hill from home it’s about an hour forty five, which is very do-able it’s just getting the day pass from herself.

Well it’s not a long trip, up through North Lincolnshire

SOME body mention motor cycles and OUCH that gotta hurt let alone me clipping car in 1978 break foot in many places then falling off broken rope swing 16 stone mate landing on top of me in 1983 and since then had steel plate in it.

M/C dangerous not really been riding since 1976 still riding today on me FJ1200 3CV yamaha 1990 and done some miles over the years. Lost many a friend to M/C RTA,s over that PERIOD of time. But hitting a truck OUCH not good. The tranny van i used to drive played havoc with me knees hence do so many miles get out stretch me legs eased the pain. Mind you being on knees at work prob not help over the years.

It was great to meet you Simon! Glad you had success, Me too - I met the land owner in his yard and had a long chat before making the short walk to the summit. Then had contacts on 60m, 40m and a couple on 20m (including one transatlantic), before legging it back to the car to get back to Center Parcs to meet up with the family for the afternoon.

Good luck with the knees! Now you are off the mark I am sure more activations will come along nicely.

Congratulations on a successful activation!

After a lifetime of skiing and climbing, and a few knee injuries of my own, I have a few pieces of advice on the subject of knees. First and foremost, diligent and slow progression is essential to a solid rehabilitation. Cycling and swimming are good low-impact activities for this, as well as some well placed thera-band exercises and careful stretching. It doesn’t matter if the intensity is low as long as you are doing it on a regular basis. Secondly, core strength and stability is essential to avoiding re-injury and maximizing your higher intensity sessions. Good posture comes from a stable core and poor posture will lead to added stresses on most joints in the body, including your knees. Make sure you’re exercising regularly and have enough protein in your diet.