Heading out for two 10 pointers today with just some small vertical whips. Going to make it work!
https://youtu.be/TLfhwWKrInA

I watched the movie. Great job

The tree cover must have absorbed a great deal of the RF your icom generated, so even more impressive!

You should have removed that tag if you could.

Antennas: the 2m one expects there to be a (switches to obsolete units) a 5ft 8in 150-200lb sack of salty lard holding the radio the antenna is mounted on at about 5ft4in above the ground. That will improve the match. You could try altering the telescopic sections as well. Having the antenna at head height will make a big improvement as there will have been lots of reflections off the ground interfering with the signal to reduce it. For 2m, you only need 19in of wire connected to the earthy side. In fact you can improve just about any handheld using its rubber duck by attaching a 19in piece of wire from the earth side of the antenna connector and letting hang down, doesn’t matter if you hold it the wire or not when you hold the handy.

(Switches back to units that makes sense.)

You should have removed that tag if you could.

Yes, this is completely unacceptable. The only time this would be OK would be with the permission of the property owner, and even then, I don’t like it. This tag should never even have been made, let alone nailed to a tree. Leave no trace.

This is a screenshot at 0:55, for folks who don’t want to go through the video. 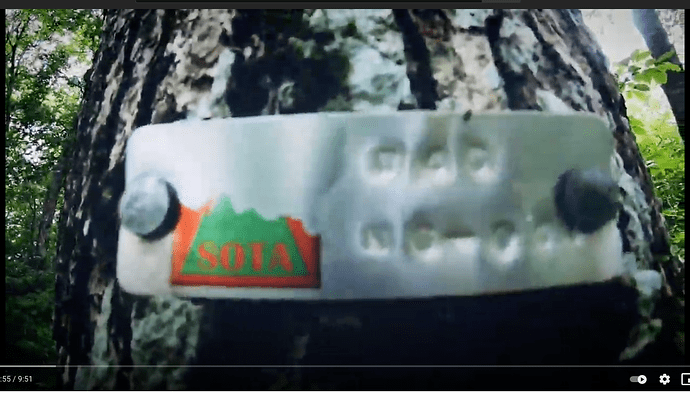 who don’t want to go through the video.

Video is worth watching… useful to see if other people have discovered better ways of doing the things you do yourself.

This tag should never even have been made, let alone nailed to a tree.

I fear he (this would never be made by a she) who made this tag, very likely made many more and has probably been nailing them to trees or willing to do it in several other summits.
It would be interesting to investigate and find out who is responsible for this.
73,

Hi Robert,
The long radials you used to change the swr on 2m were effective in allowing you to make contacts. However they are much longer than needed and probably not resonant on 146 mhz, as radials should be on an antenna used on 146 mhz. I suggest taking two 19.5” wires and attaching them to the ground point at the base of the antenna instead of at the radio. Also, orient them so they are exactly opposite to each other, ie at 180 degrees and horizontal. Their ends should be in open air and not touching anything. They are an essential part of a ground plane antenna, they have current flowing in them and they do radiate unless there is a second one opposite to them to cancel out their radiation.

It is possible that your contacts on 2m were made partly using the radiation from your radials.

The reason for choosing 19.5” is that that is approximately a quarter wavelength on 2m. Two of them in opposite directions ensures the radiation is cancelled out.

A probably much better 2m vertical antenna can be built, not bought. When you are operating portable you don’t need a compact antenna intended as a stealth antenna for condo use. You need a full size complete, unloaded antenna mounted as high as possible and clear of obstructions. With those changes i think you’ll have much more success on 2m.

The recommended antenna to build (not even requiring soldering) is the flowerpot antenna. If you prefer not to use the stealth version built using pvc conduit as a cover/camouflage, you can make it as a coilable bit of wire and coax, carried in your pack and weighing whatever a few metres of rg58 weighs.

Dude, nailing a marker to a tree? I didn’t watch the video to the end to see if you removed it, but isn’t the spirit of SOTA “leave no trace”?
–Jeff

Thanks you for watching, I was able to get both antennas resonant with a new counter poise and they are actually doing great. Not a bad back up or quick antenna at all for the 705.

Thanks for the reply and watching. I was able to get both antennas resonant yesterday with a new counterpoise. It is a little shorter and a little thicker wire and it did the trick.

It is a tag on the tree, I did not make it or put it there. I don’t know that it is such a big deal. The impact groups of people are having by hiking up there is way more than a tag on a tree. I have been an avid rock climber for over 20 years and have read many studies conducted on the impacts we have on nature.

Have you ever seen a bench mark? We leave those behind, the amount of trash left up there from hikers was far more concern than a tag on a tree. Also I am an Engineer very tied to manufacturing, if you are going to try to save the planet stop using radios right now. Don,t get me started on the by products of industrial waste we are all supporting using plastics, semiconductors, and of course fossil fuels for logistical purposes. Also do you have rubber on your shoes? Do you know anything about that process. Also if you are using any type of lithium ion battery? The process for creating those is worse than just about anything else we as humans produce.

Hanging my antenna from the tree caused far more damage to it than a tag somebody put there. Listen I really like the community here but when people are this upset about something so trivial I just cant get behind that.

Thank you for the input! A wealth of information, I was able to get them to go resonant! So happy about it, and trimming down my kit.

I wasn’t blaming you, sorry, should have made that clear.

This is eye-catching, intentionally placed, and has the SOTA logo on it. If this is public land, there is no way that permission was granted.

I’d go remove it myself, except I’m 2500 miles away on the other side of the country. Also, pretty envious of walk-up 10 pointers. Sure don’t have those in W6.

No Worries, I live in Montana where my 10 pointers are a journey. I am in the Southeast on business so im taking advantage of these while I can. I am heading out for a 10 pointer with 3 bonus points today. Looking at a 13-15 mile hike on this one the route I am taking. Also I am bringing the most stripped down kit I have ever tried to challenge myself.

I have the MFJ-1899T antenna that covers 80m-6m, but haven’t gotten to use it on a summit yet (nearest even 1 pointer is about 2+ hours away from here in central South Carolina). I did build a set of single radials/counterpoise for each band, and set the whip length using my MFJ-259 analyzer. I also use the recommended 90 deg BNC-to-PL-259 adapter to connect to the PL-259 (SO-239?) plug on the back of the FT-817 and not stress the 817’s front BNC connector.

Only used one radial per band due to ending up with a lot of wires. They all terminate in a single alligator clip that clips to the FT-817 chassis. The wires are a little longer (about 6” longer) than the instructions recommend to ensure the bottom CW portion of each band is covered. To set the whip length with the analyzer, I recorded the number of whip sections extended for each band, plus the number of “fingers” on any partial whip element extended (fingers held perpendicular to the whip). This way the number of elements plus “fingers” of a partial element are written down multiple places so I don’t need to carry a ruler/measuring tape. Can easily fine tune the whip for the band portion in use.

A big takeaway is not to have the radials crossing each other. Antenna doesn’t like it. I know it sounds like common sense, but easy to miss when testing and setting up. Experience talking; couldn’t figure why the SWR reading suddenly went south till I noticed that I’d stepped into and tangled the radials.

So far have only been able to test on the air on 80m. Was able to check into a CW Net (Carolinas Slow Net; 3571 kHz; 0000Z) with the net control 150-200 miles away. This was from the wooden gazebo in my back yard using the 817 at 5W with an external battery (7Ah LiFePo). Copy was weak but readable on both ends, but it’s definitely short for an 80m antenna. This was with the counterpoise pointing away from the other station vs toward them. I was actually thrilled after all the work setting up and tuning the antenna and radials to be heard at all, especially on 80m with such a small antenna. Will have to test the other bands when work and family time permits.

It’s not a full sized dipole, but if it works as well on other bands as it does on 80m, it’ll be handy for very quick setup/tear down. Definitely a compromise antenna, but quick to use, and better than not getting on the air due to not having the time/space to put up a more efficient antenna.

Good luck on that next hill,

Listen I really like the community here but when people are this upset about something so trivial I just cant get behind that.

I guess the point raised by Andy was that if someone non-SOTA related was to see that and get just as upset, the Management Team would be presented with a complaint pretty quickly due to the logo, and SOTA has very clear rules about bringing the program into disrepute. The reaction of everyone else here is just a clear indication of the reason for that rule - we all want every SOTA activator to be pure as the driven snow when activating because it reflects on all of us.

So, while it wasn’t you that put it there (and sorry that you may have felt accused), we’re all upset that someone felt the need to do that. And if that person is reading this, stop tagging summits tout suite. And in the future, if you see a SOTA activator doing something they shouldn’t, no matter how trivial, please call it out respectfully - behaviour unchallenged is behaviour condoned.

Awesome! Thank you so much for the advice. Im going to post another video of an activation using this antenna. I was able to get it to go resonant

Actually pretty impressed with what it did. Hopefully run into you on the air sometime, 73 K9ROB.

Tactuflly said. No problem, if the consensus is they can bring negative attention, and guess I can see how that could happen. I’ll pull them down.

Maybe I need to leave my lucky anvil at home and carry a claw hammer instead. Just in case.