Intro
While in Denver during April and having a chance to activate a few SOTA peaks I was fortunate to meet a fellow SOTA activator. During our conversations the annual CO 14’er event came up as a good opportunity for an active SOTA weekend.
14’er event “Amateur Radio operators from around Colorado will be climbing many of Colorado’s 14,000-foot mountains and Summits On The Air (SOTA) peaks to set up amateur radio stations in an effort to communicate with other radio amateurs across the state and around the world. Join in on the fun during the 25th annual event and see how many of the mountaintop stations you can contact. This year the event is expanded to include the entire weekend, August 6 & 7.”

The plan
It was a simple plan. Fly to Denver; meet up with Brad WA6MM, and backcountry camp Friday night close to the trailhead for Saturday activation. Rinse and repeat for Sunday.
Now, Brad is not your normal SOTA guy. He specializes in 8 and 10point peaks and has a 100% unique summit record. Brad climbs throughout the year mostly solo. 14,000ft peaks are not to be taken lightly, especially when you live at ~950ft ASL. The air at 14k has only about 65% of the oxygen I’m used to. I had a further challenge of no acclimatization time. So this was always going to be a physical test for me!.
Brad had selected a major peak for us on Saturday Mt Shavano, 14,229ft (W0C/SR-004, 10pts) in the Sawatch Range. This is approx. 3hrs drive from Denver. My flight landed on time and with the new light rail connection, I was at our prearranged meet up point in Denver by midafternoon. We hit the road immediately. We drove to Silada (approx. 3hrs) picked up some provisions, quick dinner at the “Boathouse” and then headed to the trail-head area which is forestry or BLM land. We scouted the Mt Shavano trailhead after a 7mile drive down a dirt track. Dispersed camping is allowed so we made camp. 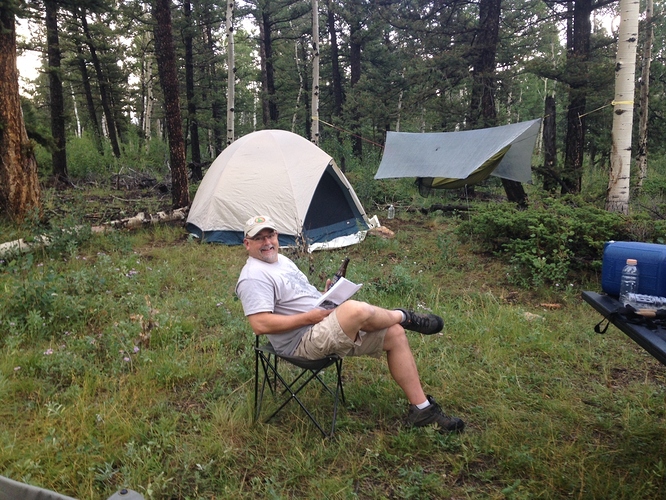 2016-08-05 18.57.10.jpg1632×1224 907 KB
Unfortunately there were threatening low clouds and no view of the summit from the campsite.
Mt Shavano is a 9.25m (RT) climb with 4600ft of elevation gain to 14,229 ft. The trail is reasonably good but you gain a lot of elevation in 4.5 miles! The weather forecast for Saturday was 40% chance of rain and possibility of thunderstorms in the afternoon.
We discussed plans for Saturday morning. Brad thought we could leave the trailhead around 6am and be there in time for the 9 am start of the 14er event. I was more skeptical, my longest hike in the last month was 8 miles and about 2600ft altitude. We were already at around 8000ASL. We agreed to a 0500hrs reveille to start in the dark before 6am. We sorted our packs with water, clothing and food.
Morning seemed to roll around quickly, we experienced some rain during the night and couldn’t see any stars when we got up at 0500hrs. It was damp and cold. Not a bad night’s sleep, but it was interrupted by the rain, coyotes calling and a few “natural breaks”.

Arriving at the trailhead (2970m) just before 6am there were only two parking spaces left! Within a few mins we were part of the parade up the trail in darkness using our head lamps so as not to trip on the rough track. The rough trail route has been marked on the photo of Mt Shavago. 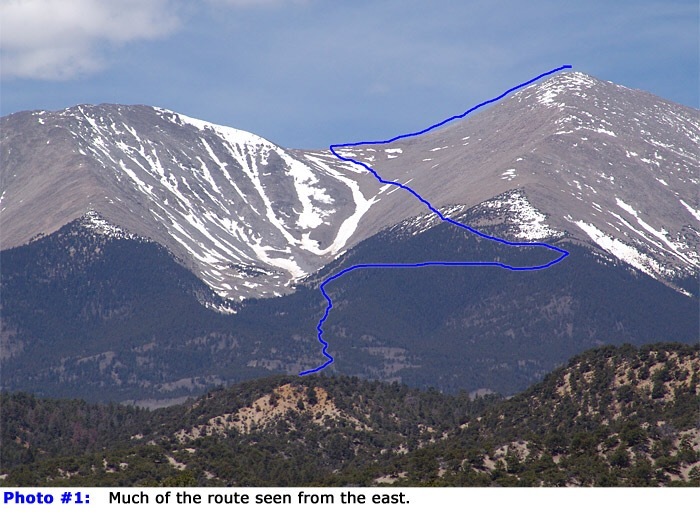 2016-08-08 21.06.03.jpg700×525 119 KB
The pace seemed fairly brisk but manageable. I was huffing but most of the folks around us were chatting up a storm. My plan was to keep with Brad as long as I could and then make my own way to the top. It took a little over one hour to reach the tree line. This was about 2miles into the walk and about 12000feet elevation.
As we broke through the tree line the summit was still shrouded in cloud. We could see a progression of folks ahead of us on the trail snaking ahead up to a shoulder (the feature us Europeans call a Col). I stopped to add a layer, hydrate and have a 2nd breakfast snack bar. 15mims later I was ready to go and I could see Brads red backpack about a half mile ahead. I think he sped up when I stopped  …. I plodded on. The altitude was really starting to affect me now. I was passed by a lot of folks on this long stretch, but I didn’t come to CO to walk halfway up a mountain!
The unknown factor for the activation was the weather. Brad had told me to keep an eye out for dark based, puffy clouds and be prepared to retreat at the sounds of thunder. I kept struggling ahead and finally lost sight of Brad as he made the shoulder.
Eventually I made the shoulder. 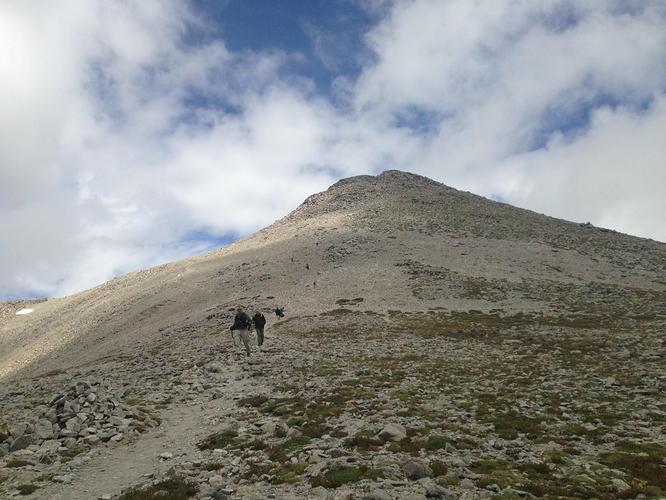 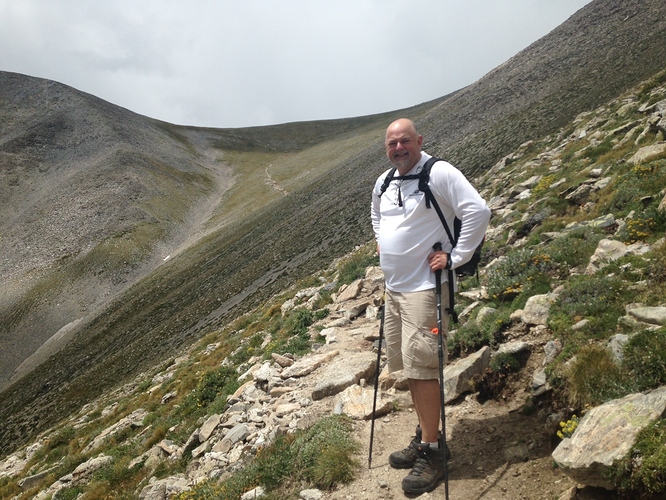 IMG_1168 [458015].JPG1632×1224 872 KB
This last section was brutal; I was already being passed by people in light shorts and sneakers running this thing and on their homeward leg! I persevered and made it to the summit where I found Brad operating HF CW. 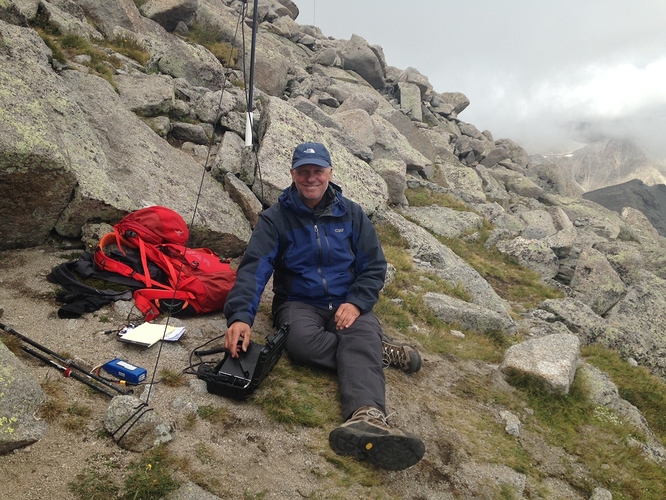 Brad had been there about an hour. I think he was surprised to see me. As I found out later this peak had been a bit tougher than he had expected and he wasn’t surprised I had dropped off to go at my own pace. 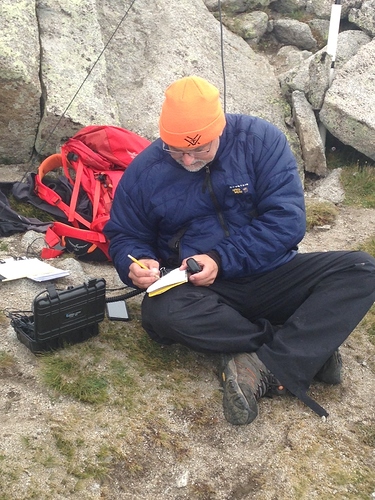 Half an hour later we packed up for the long decent. 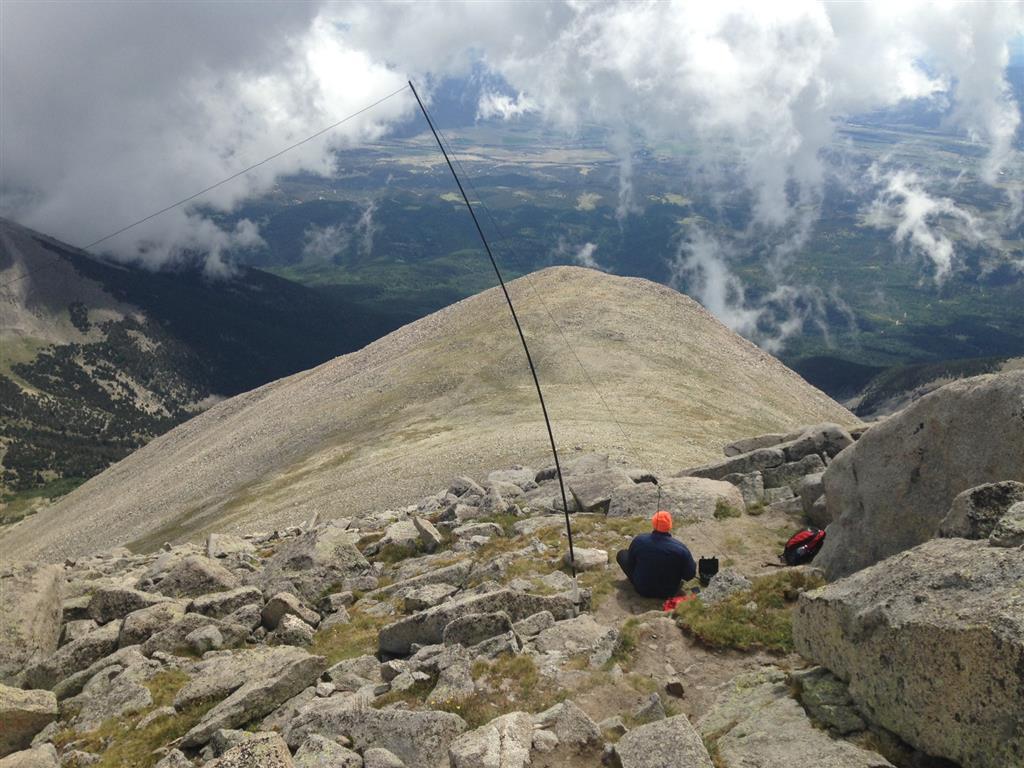 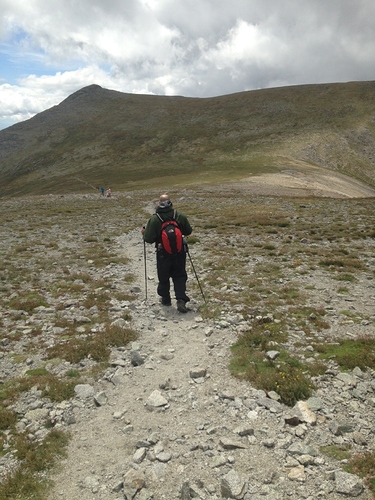 Thank goodness I had brought trekking poles with me. Brad and I made good progress down and reached the trail head after about 2:30hrs. 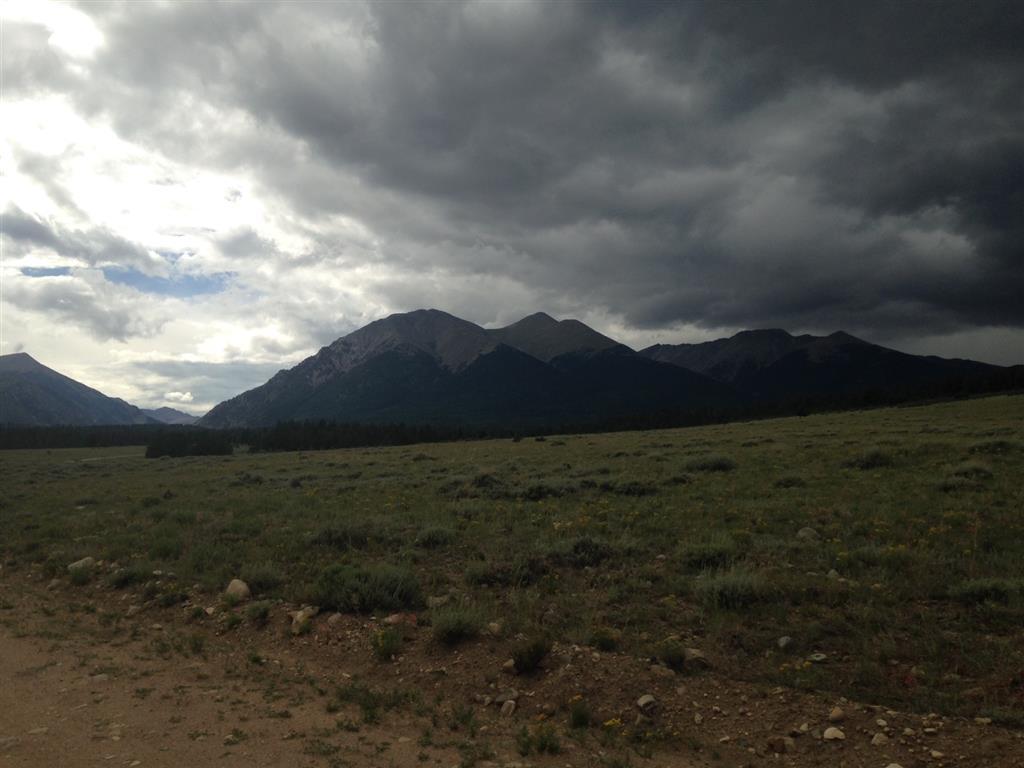 Back at camp I declared complete exhaustion! So, I went to my hammock and took a well-deserved 30min power nap. Refreshed we drove into Salida and visited the Boathouse again this time for a burger and well deserved beer or two.

Planning for Sunday, Brad was feigning tiredness to make me feel better I suspect, but he laid out some options for Sunday. I was pretty certain there wasn’t another 6hrs of hiking in my legs available for Sunday.
A. “Drive up” activation of Pikes Peak (14’er and 10Pts SOTA)
B. Head to Mt Evans (14’er and 10Pts SOTA) and choose a route once we got there. … Plus there are lots of other options nearby
I choose B. It was going to be a two hour drive.
We set the alarm for 5am again and hit the sack. I thought it was colder Saturday night than Friday but we’ll never know for sure. It was definitely in the 40’s. We were once again woken during the night by howling coyotes, this time they were within a few hundred feet of camp and very loud. Then in early morning we had what we suspect could have been an elk go by camp.
We packed up camp, checked we’d left no trace and were ready to go at 6 am. At first light it was clear it was going to be a nice day, not a cloud in the sky providing us our first clear views of Mt Shavano. 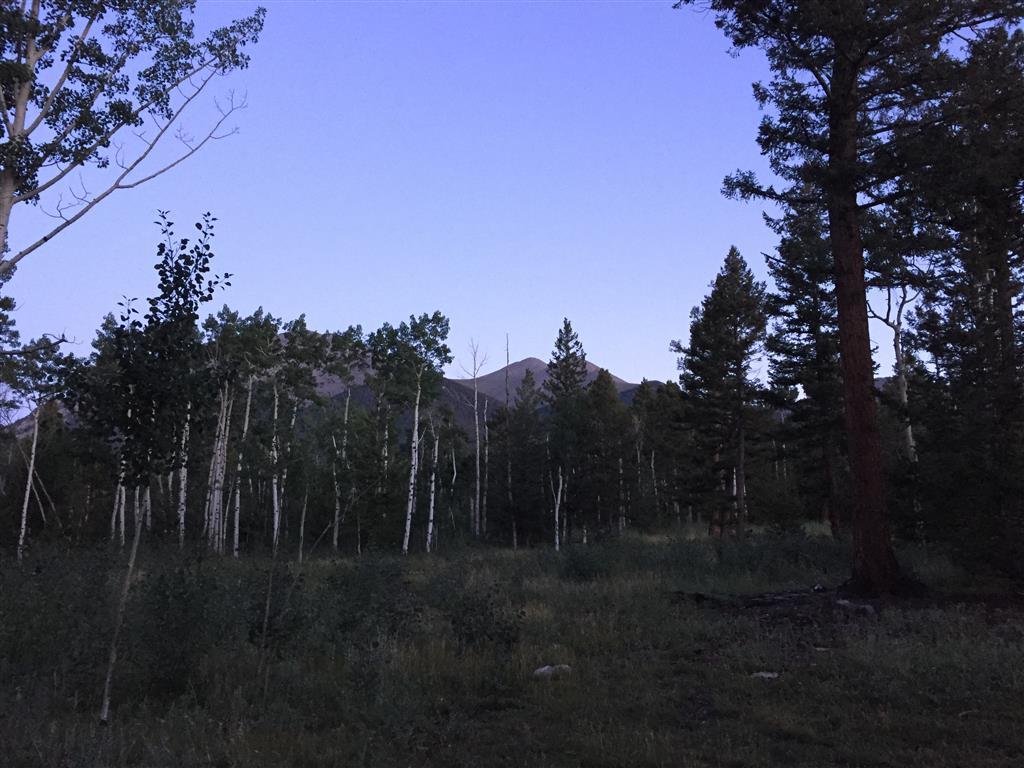 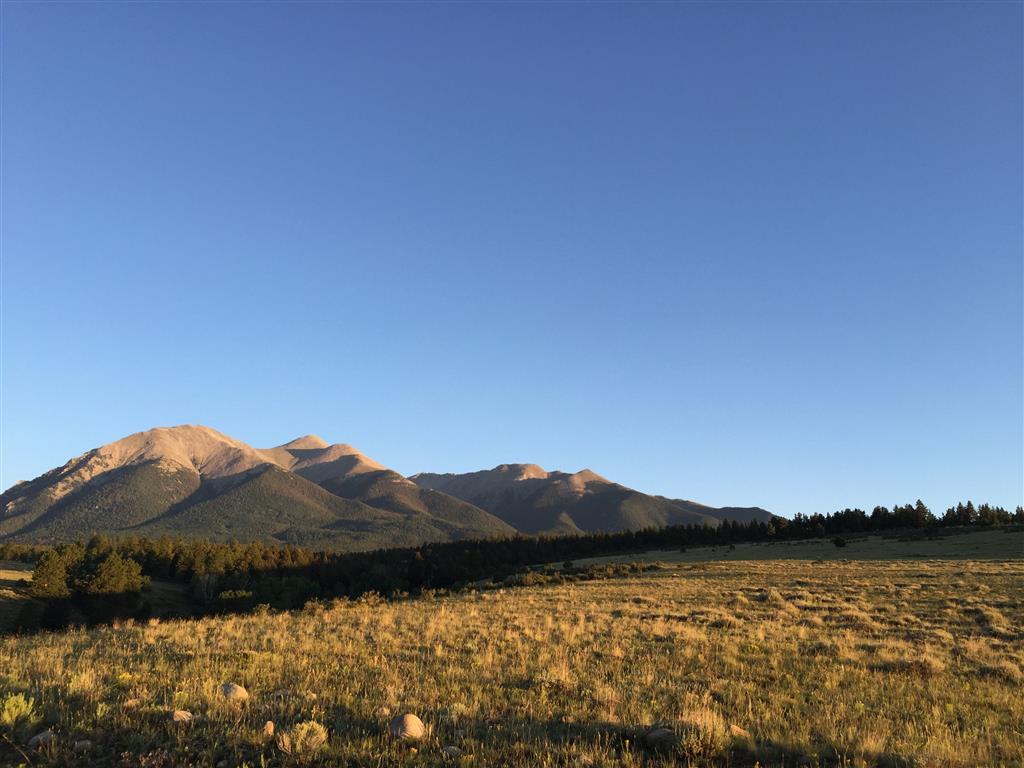 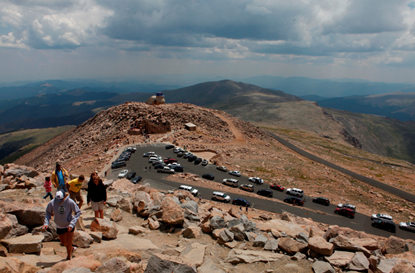 As it’s so close to Denver it’s a popular day trip for locals so we joined the vehicle procession for 14miles up to the top. We found a parking space and quickly climbed the 150 or so vertical feet to the summit. We dropped down from the peak to be out of the way of the day trippers and set up the HF rig. I operated 20m and gathered the necessary QSO’s including two Summit2summits (S2S).
Time was pressing; the potential of afternoon weather forced our decision not to do Mt Bierstat but I would do Rogers Peak, 13391ft alone. We drove back down from the increasing tourist mayhem of Mt Evans, 10points in hand.
Not my image but it shows Rogers Peak above the Mt Evans Road. 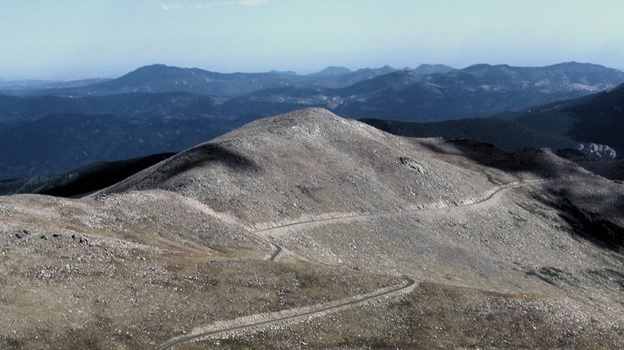 Brad dropped me off by the road. I lightened my backpack, and took to the walk with 2m HT, water and a spare layer of clothing. I was to call Brad on 146.52 when I reached the summit. It took me less than an hour to summit where I found it was a large wide blocky top the size of a basketball court.
Not my image but this shows the terrain at the summit… 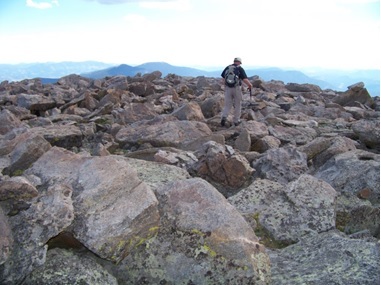 I situated myself on the north Eastern side as this would be
an FM only activation; I needed to be able to reach the populous of Denver.

I called Brad and told him I was going to drop down the northeast side of the Mtn to make it more interesting.

When I arrived back at the car I had to do a bit of first aid as I had cut my elbow when I sat down to activate and my shirt elbow was soaked in red-stuff. At that point it poured with rain.

That was it. Legs were done. We drove down the mountain taking the road past Mt Pence and Squaw Mountain that I had activated in April.

As we dropped into Denver we found a nice little brew pub in Golden that also served pizza, a nice end to the day.

Great report Richard! Many thanks for coming out to Colorado for our annual ham 14er event. You did great for only having limited time to acclimate to our high country. I think we were very lucky to get a reasonable weather window on Mt Shavano Saturday as others ended up abandoning their climbs in other parts of the state.

I hope to CU again soon!

This is a significant accomplishment, esp. for a “flatlander” with really no time for altitude acclimation! Shavano is not a trivial 14er climb due to the nearly 5k ft elevation gain and nearly 5 mi one-way trip. I did Shavano several years ago after a 10 day altitude adjustment…even then it was an arduous effort made more challenging due to heat when climbing in good weather.

Hi Guy (N7UN),
I know you know that mountain well being the first activator several years ago! It was definitely a lot harder than I thought it would be. Richard (N2GBR) did great. He was also the first HF phone activator on Shavano. Those British guys are a strong and determined bunch!!