With a very strong nod to @2E0YYY I work and rose at 4:15 BST to head out to my local SOTA summit Gummer’s How at the South end of Lake Windermere, NW England. I’d essentially left my rucksack unpacked from my previous trip up High Street knowing that I had one fresh 5AH LIPO and a part used one.

On the walk up, reaching round to the back of the pack I discovered my head torch wasn’t attached, obviously detached before my previous ascent. No matter at 4.40 BST it was getting light anyway and footing wasn’t an issue. 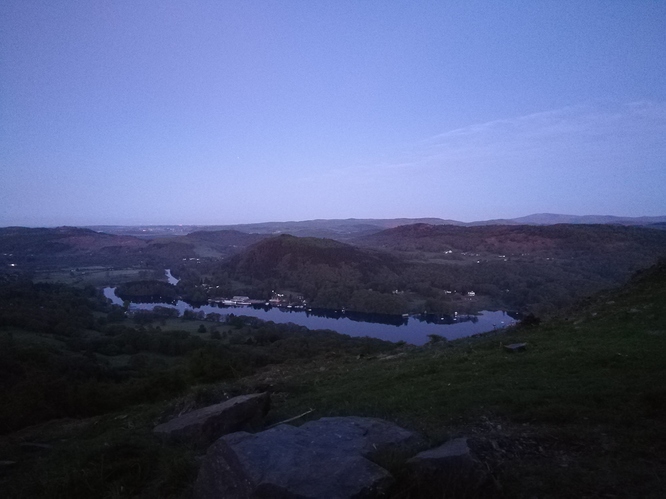 In utter astonishment when I reached the summit there was absolutely no wind! The last time I was in similar conditions on a SOTA summit in the Lake District was the evening of 24-MAY-2017 on the Old Man of Coniston.

Visibility was spectacular so I did spend a good amount of time taking pictures and just sitting and grokking the scenery around me. 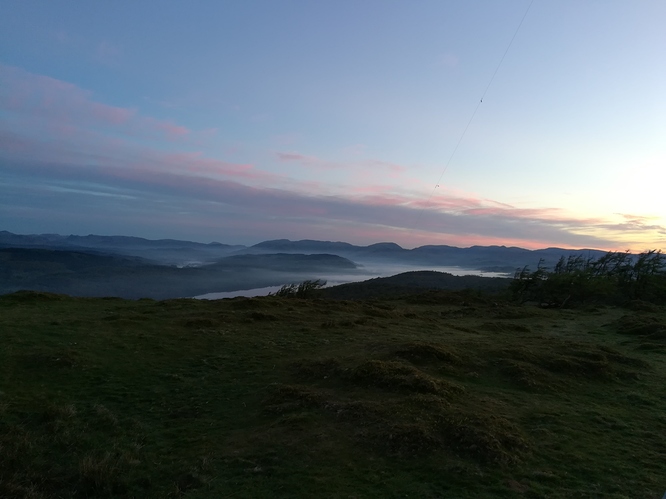 Band conditions were pretty terrible so radio work was slow. 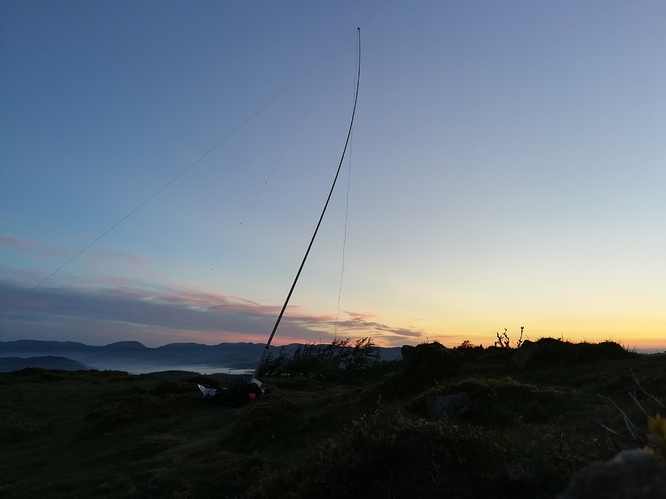 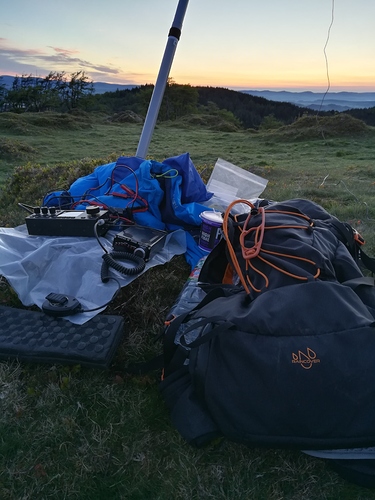 As the sun rose there was rolling mist running down the lake towards Newby Bridge and beyond. I noted via the binoculars that the trig stone on Coniston Old Man was clearly visible with Dow Crag and Harter Fell (on my list to do) visible behind, the Langdales, Helvellyn and then Red Screes (with the ‘scar’ of the slate quarry) and the Thornthwaite Beacon. Heysham Power Station was clearly visible as was the Blackpool Tower, The Hoad Monument in Ulverston and the Barrow Submarine Construction sheds in the distance. The offshore wind-farm just seems to be growing and growing. 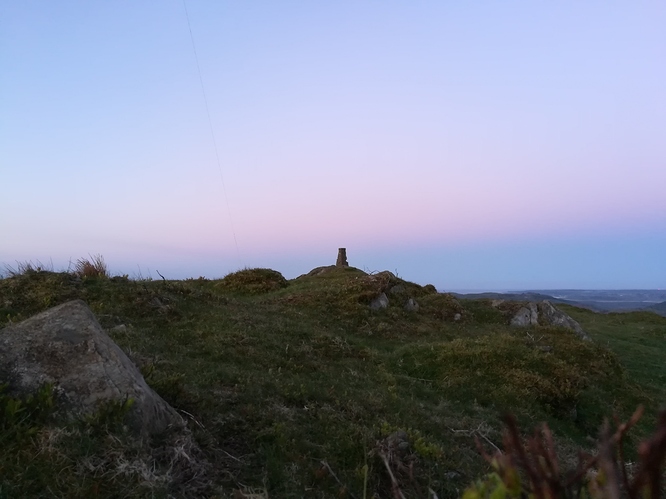 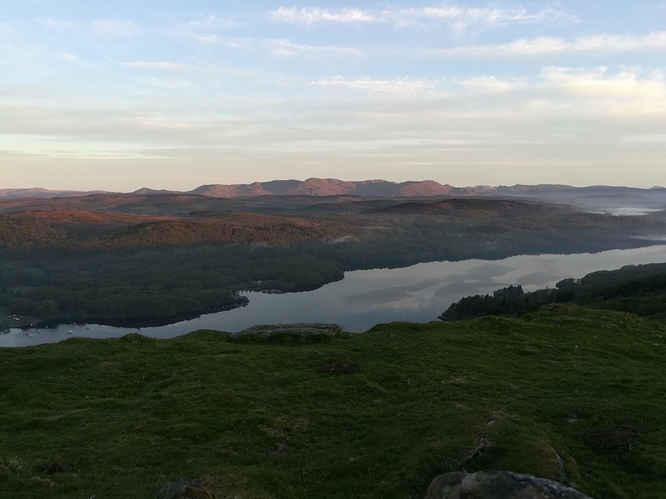 Sunrise was spectacular and obviously from the East which casts a very unusual light compared to the normal afternoon/evening activations. 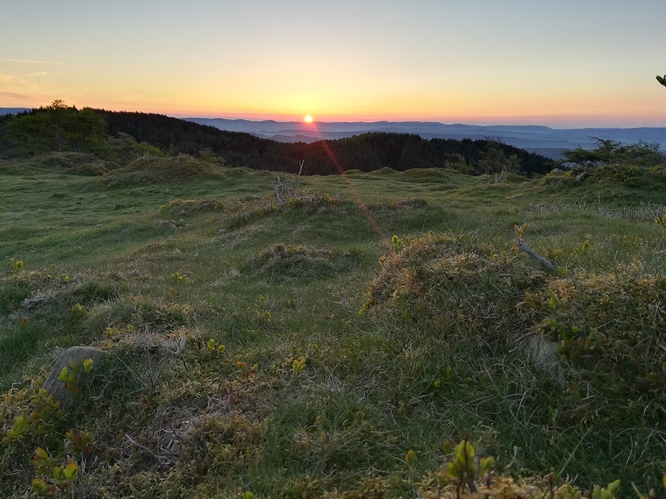 There was a lot of static noise being reported on 40m clearly due to Thunderstorms elsewhere, my SOTA calls generally were unanswered for the most part with the exception of a few dedicated chasers (and early risers!)

I had a few nice chats on 2m towards the end but the jewel in the crown was another S2S with Phil @G4OBK on his Czech tour using his OK8CDX/P callsign, just catching him before he went QRT on 40m with a lot of QRM but all details copied correctly. 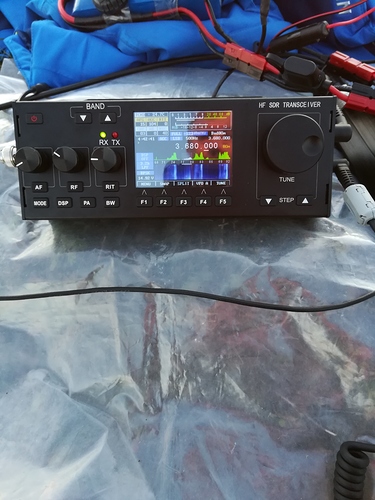 I had power issues throughout the activations which diagnosis unfortunately ended up with either the MCHF transceiver or the power cabling. I will need to investigate further. 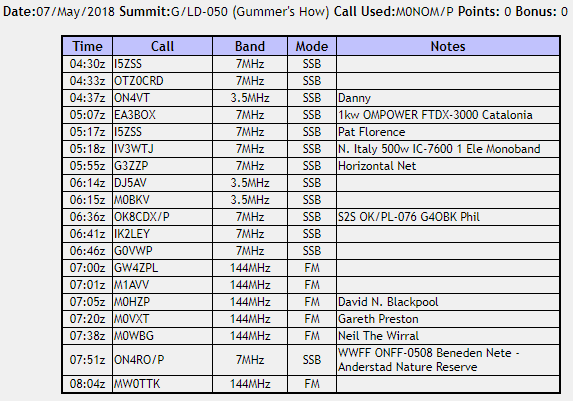 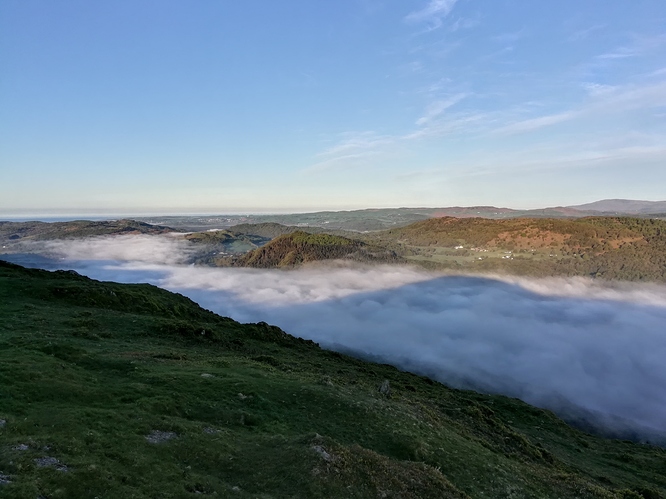 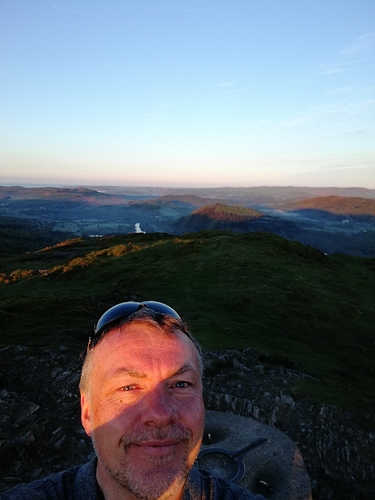 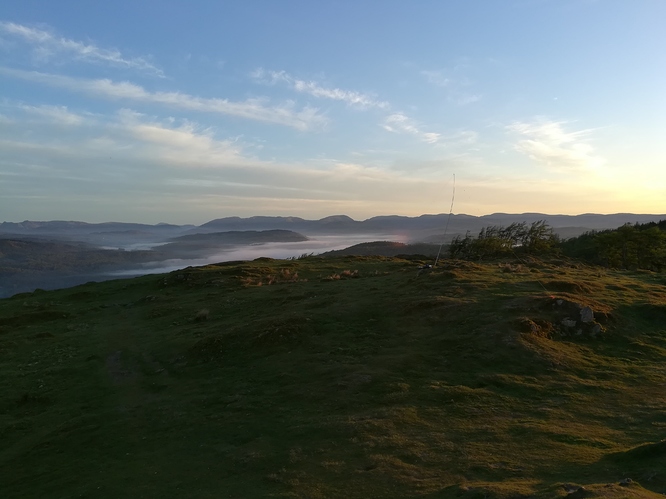 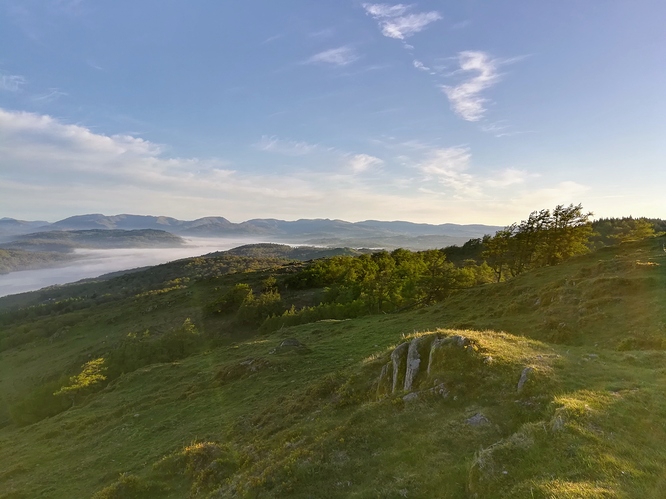 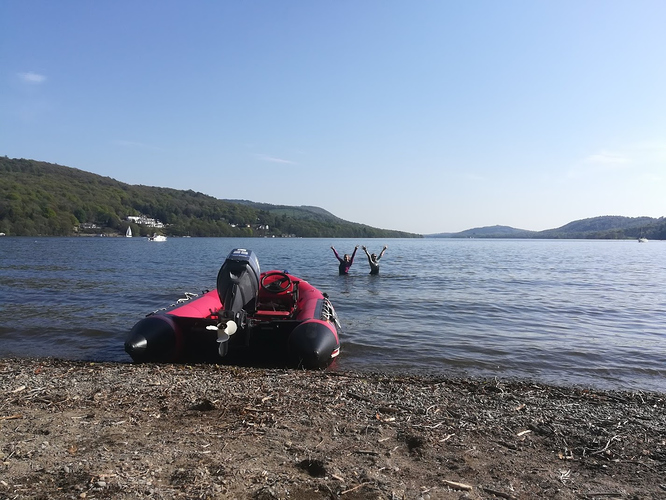 …grokking, now THAT’s a new one (and a keeper at that)…nice post

Hi Mark,
Nice to have worked you on G/LD-050 long time since I was up there Sep 2010, some good picture’s as well and I see you worked Phil after my tip off he was on 40m ok have fun.

Some stunning photo’s there Mark. I have spent many a day Mountain Biking in Grizdale Forest. Before the Go Ape was built we could bike round for hours and not see a soul. I believe there is a SOTA summit in there that I have not yet done.

I have a week booked in September staying near Ireby and plan to activate Lords Seat and Binsey. There will be mid week activations so I’m hoping I manage enough QSO’s to qualify them.

Hi Terry. Great tip thanks, not an easy QSO with Phil - I did manage to tune out the QRM up the band after the QSO, still learning the filtering options with this MCHF transceiver.

Had to think there about a summit in Grizedale but yes you are right Top O’Selside is on that ridge, I’ve not done that one either yet. Will have to add it to the list. Chasing is pretty good up here at the moment you shouldn’t struggle to qualify a summit, especially if you alert the day before.

Stunning pictures there Mark !! Gummer’s How is a great little Summit with 360 views

Thanks Tony, yes it is a great spot for views. The Morecambe Bay Amateur Radio Society of which I’m now secretary is having an activity night there on Tuesday 29th May to do a bit of outdoor operating and give folk a try at SOTA if they wish (weather permitting).

It took me 2 attempts to do Gummer’s How. The first time I thought someone was re-enacting Noah’s Flood there was that much rain. I never got out of the car! The second time was much better, a bit breezy but quite sunny. I thought it was a cracking wee summit and a delight to activate. Managed a 23cms QSO from there which was nice. Nice pics.

I was up there early for the last EU<>NA S2S event and had to sit in the bothy bag because it was wet and cold!

Oh, and I found out my power issues were due to my own dodgy construction, having put an inline fuse in the power cable for the MCHF I found a break in the cable near the connector for the fuse, it was a miracle the thing worked at all. I suspect drawing current on transmit was causing it to disconnect.

Anyway, all fixed now and working with a new addition, a Gen-u-ine Harris military handset - good reports for audio so far and much reduced wind noise. 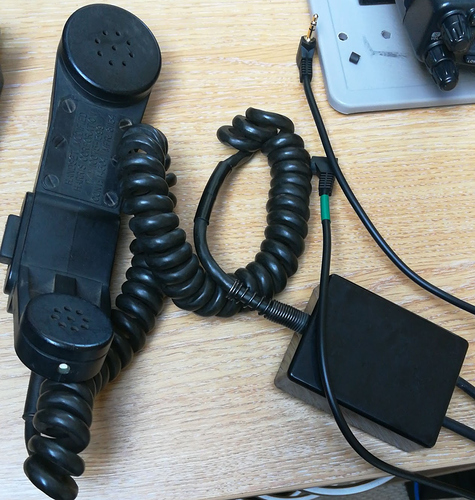