There was again early rain, but it had cleared by the time was were ready to leave the cottage. The forecast was for a reasonable day, so we headed to Nantgwynant parking in the Pont Bethania car park. It should have cost £5 but the machine was out of order so it was free. It was cloudy but dry with reasonable visibility as we headed up Watkin Path. It started with pretty woods with little waterfalls which led into Cwm Llan: a pretty valley with lots of quarry remains, including impressive inclines. We left the Watkin path for the South Snowdon path just before the Watkin path crossed Afon Cwm Llan. We followed the South Snowdon path up an incline but where it headed right along another quarry level we headed straight up on rough and wet ground. We soon reached the snow line and going by the side of the quarry.

Then it started to precipitate: a mixture of rain and snow, so we stopped to apply waterproofs by quarry buildings. As we left the buildings to take the difficult ascent up snowy slopes, Martyn went down into a hole through the snow getting a wet foot, not good! It was very hard work finding way up through snowy rocky area, and we were glad to reach the ridge line where there was an easier but snowy ascent by wall. After a slightly tricky ascent to the peak of wall, we turned left on rough snowy path towards the summit. It was hard going on deep snow in places with visibility of only a few yards. At the summit we looked for trig but failed to find either it or any shelter. We just set up in as much shelter as we could get form the shape of the hill, and went for a VHF only activation.

We pushed the VHF antenna into the snow and soon picked up an S2S with GW0MJG on Foel Fenlli. But then it got harder and it took us almost half an hour of calling to get the same 4 VHF contacts each, during which we needed to occasionally brush dry snow off the log books. We carried on calling occasionally while eating lunch but no further contacts were coming. At least we had qualified the summit, and Caroline had the S2S she needed to get over 1000 S2S points.
We talked to one other person who had come in other direction and was also looking from the trig point. With lunch eaten we retraced our steps (though our outgoing footprints were now partially obscured by fresh snow). We were overtaken by a man with longer legs going much faster, but at least in places we then had his footprints in the snow to follow. We descended to the north as we didn’t want to go back down quarry route – too steep in the snow. The north route was also steep but we followed the snowy footprints of fast walker. At Bwlch Cwn Llan we descend via the more northern of two paths as it was less steep and snowy. Below the snow line we descend on a rough boggy track to pick up old quarry level. On the final approach to the quarry track Martyn slipped on slippery rock banging his nose and eye area: producing some slight abrasions, but no serious damage. The nice but wet in places level took us back to join outward route. The snow/rain had stopped, so it was a pleasant return descent. We got back to the car at around 6pm as the light was fading: a hard day but enjoyable day despite the snow and lack of radio contacts. We later discovered that the trig point is a bolt and not a pillar so it was not surprising we couldn’t find it under the snow cover. 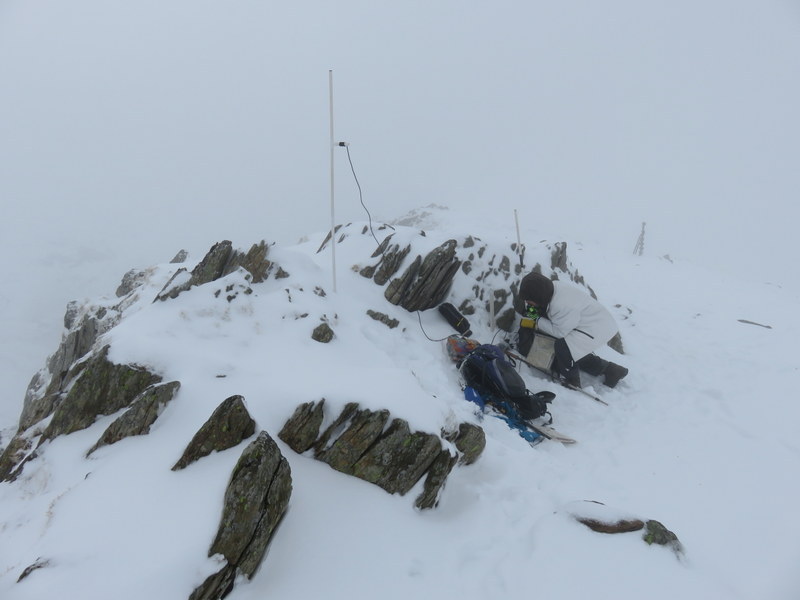 Thanks for the reports and pics. You certainly had some interesting weather to contend with

…well done on the 1000 s2s points and thanks for those many s2s contacts over the last few weeks. With the end of the winter bonus roller coaster of activations I’m about 6 activations behind on the blog so I’ll be hammering the keyboard tomorrow if the weather forecast is anything to go by…rain and high winds.