The last day of our GM/SS trip and we were only likely to have time to do one hill. The forecast was similar to yesterday with a brisk cold wind, more cloud but with some sunny intervals and the possibility of the odd wintery shower. Of the hills that Martyn had activated before Caroline was licensed, the best for a single activation was the 4 point Blackcraig Hill, not far from the holiday cottage we had visited when he activated it more than 12 years ago. It was a moderate drive up the A76 to New Cumnock and then down Glen Afton where we were the only car using the roadside parking area about 500m south of the track that leads past Blackcraig cottage up over Quintin Knowe.

It was dry but cold for May as we set off back down the road to the track and past the cottage. The track meandered uphill crossing a pretty stream. A roe deer ran across the track and gracefully and easily leapt over a fence into the adjacent woodland. We continued past a prominent cairn not marked on the map to the fence crossing Quintin Knowe where staying on the same side of the fence we turned to follow it almost all the way to the summit. There were some very boggy sections to carefully negotiate, which slowed progress. There was a fence to cross near the summit, with a stile not far from a prominent cairn. We had worked Jim MM0GLM who was on GM/ES-064 on the ascent but he had gone by the time we got to the summit. 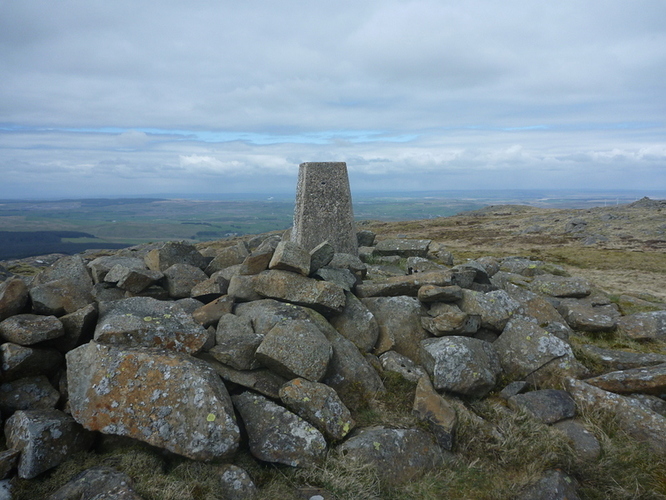 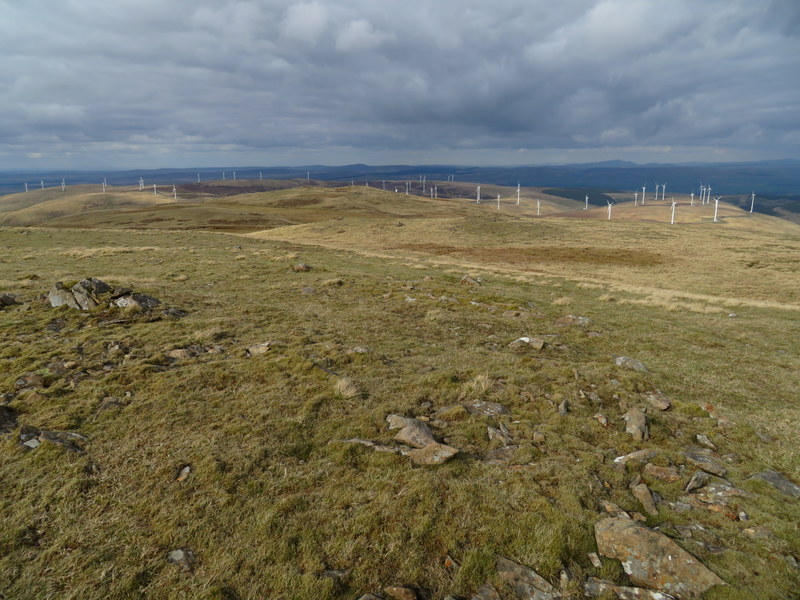 The cold wind was blowing over the summit when we arrived so after a quick visit to the trig point, we tried to find somewhere slightly less windy to work Colwyn MM0YCJ and Jack GM4COX for S2S using the rucksack antenna. We made our base there, with Martyn setting up HF on the slightly less windy side of the hill. After several perambulations around the summit Caroline decided that there wasn’t anywhere suitable for 2m that was less windy than the trig point so took advantage of the hole in the top to support the dipole though she didn’t risk much extra height. With extra layers on (shirt, jacket, fleece, coat and outer flame) she huddled by the trig point for the little protection it offered and had a surprisingly good run on 2m FM getting a total of 23 contacts – what a difference from the struggles on previous hills! Martyn had found a slightly more sheltered spot but still needed 5 layers. He found HF reasonable with 11 contacts on each of 60m and 40m. Caroline decided to try HF but struggled to 3 on each of 20m and 80m but did get an Italian special event station related to Leonardo da Vinci on 20. 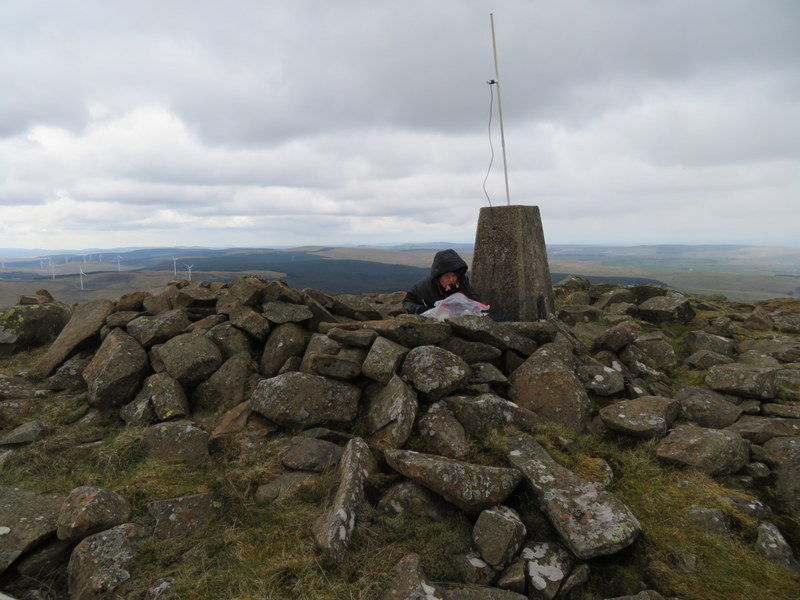 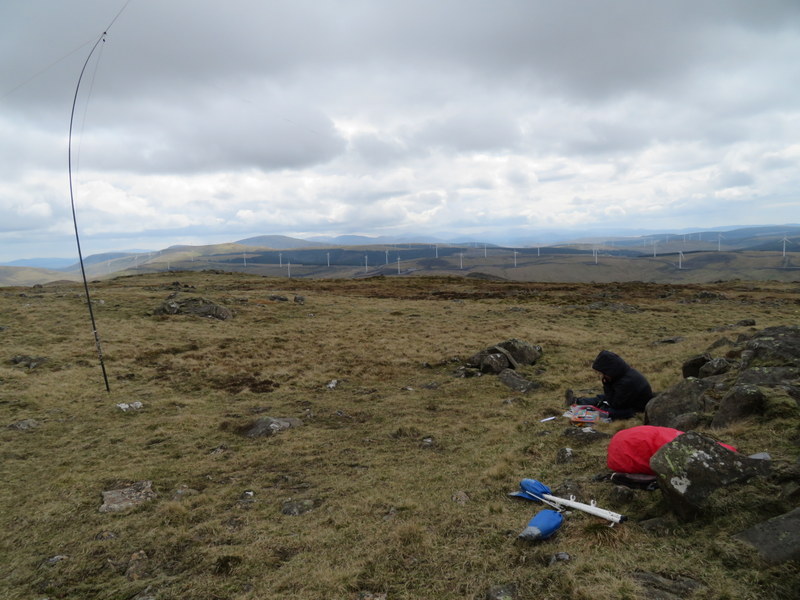 There were good views from the summit, though mostly cloudy with a few sunny intervals and some brief flurries of hail and snow, and with even the distinctive outline of Ailsa Craig hazily visible in the distance. We stayed quite a while on the summit and were getting chilled as we packed up. We soon warmed up on the way down, pausing by a ruined sheepfold by the pretty valley to eat our apples. 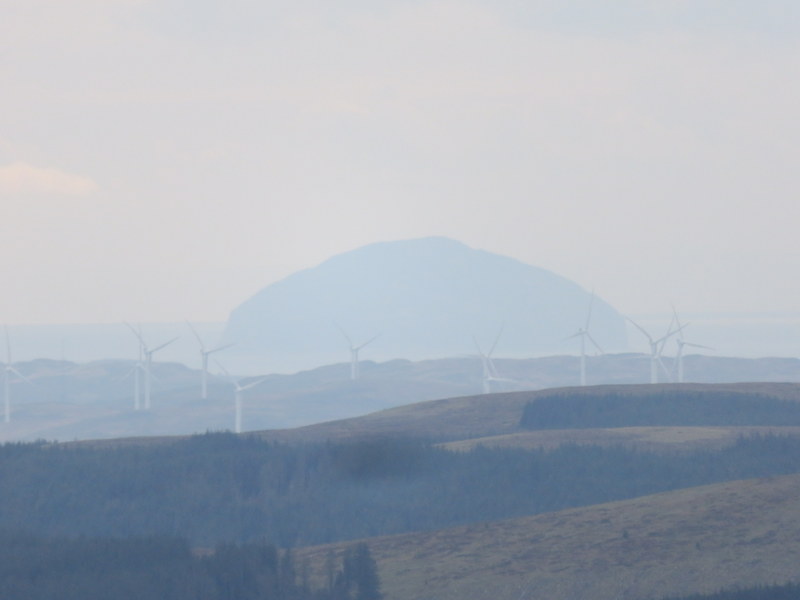 On our way back through Thornhill, Caroline dropped Martyn off near the cross to get our fish and chips while Caroline drove the short extra distance to the cottage. The fish was enormous, overhanging the plates and the chips were tasty: recommended if visiting the area.

Congrats to you both on an excellent excursion into SS and thanks for your reports and pictures, which brought back many memories