We had spoken the Robin GM7PKT via GB3HI on our way from the ferry to the cottage the previous evening and were hoping to get a summit to summit with him. We also knew that he needed Beinn Talaidh as complete, and it would be a complete for us too since we had worked him S2S on it when we were in Northern Ireland in May.

The forecast was for a dry hot day, so we selected the southern approach to GM/SI-017 Beinn Talaidh with the hope of adding either Sgurr Dearg SI-019 or Carn Ban SI-180 later. There is limited parking at the start of a track at NM723349, and when we arrived there was already a car parked there with a couple booting up, it looked tight to get our car in too, but they kindly offered to move it slightly, enabling us to fit in as well without blocking the track. There were midges about so we applied smidge which deterred them. We set off along the track, knowing that we needed to look for a path off to the left in order to locate a stile over the deer fence at NM636330 on the edge of the forest. When we got to a gate on the track we decided that we had gone too far, though we could see the other couple ascending the hill above the forest from further along the track. We backtracked to what was the track’s first right bend from road, where we thought we detected a faint path, which became a bit better defined as we headed roughly west through open forest, and thankfully did lead to a stile over the deer fence.

Once over that we headed over the grassy spur of Maol nam Fiadh, steep but reasonable terrain: we got occasional glimpse of the other couple ahead of us. We walked in shirtsleeves: it was hot hard work despite the fluffy high cloud cover. We got good views of Glen More as we ascended, with several stops for photos. Once on Maol nam Fiadh the gradient eased, the clouds started to disperse, and the summit came into sight. We spotted the couple from the other car sitting by the summit cairn and had a chat with them: they had continued further along the track but had then a horrible crossing of a deer fence to contend with, so we were glad we had found the stile!

We moved away from the summit cairn towards the remains of the Vanessa trig point, sadly now fallen on its side. It was hot at the summit, and the occasional breeze was not enough to keep the midges completely at bay, so Caroline retreated under a midge net, lashing the VHF antenna to the little that remained of the trig point base: low wind meaning it needed little support. Martyn set up HF a little further down the hill, where he attracted a little more wind and fewer midges. Radio conditions were reasonably good: Caroline got 21 contacts including 7 S2S, 4 on 2m FM (GM7PKT, MM0GLM, GM4COX and MM0YCJ) and one each on 40m, 20m and 17m, with Martyn getting 20 contacts with 6 S2S – the 20m S2S having faded before he could work him. Between us we had qualified the hill on 2mFM, and 60, 40 and 20m SSB. The other couple passed by as they were leaving and remarked that they had overheard Caroline telling a caller that we were on a demoted Corbett: they noted that they were Corbett baggers, and in their book (literally) it was still a Corbett! 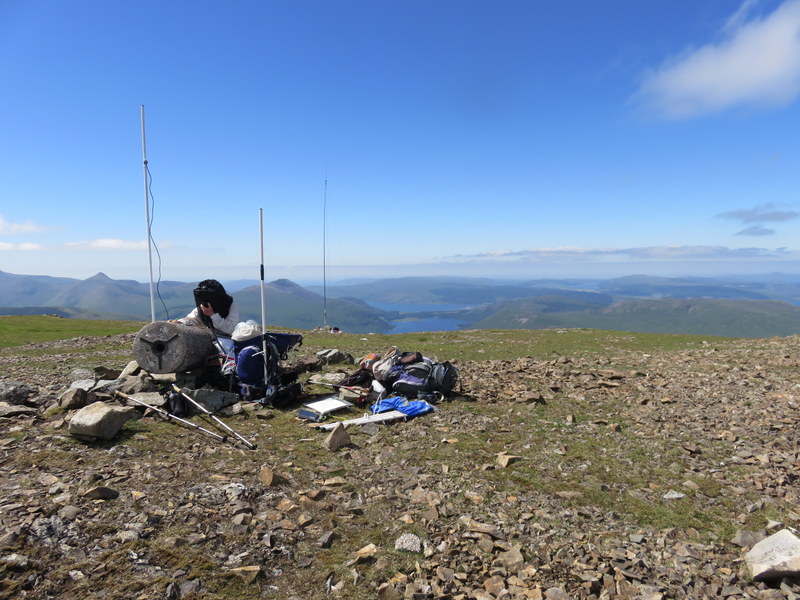 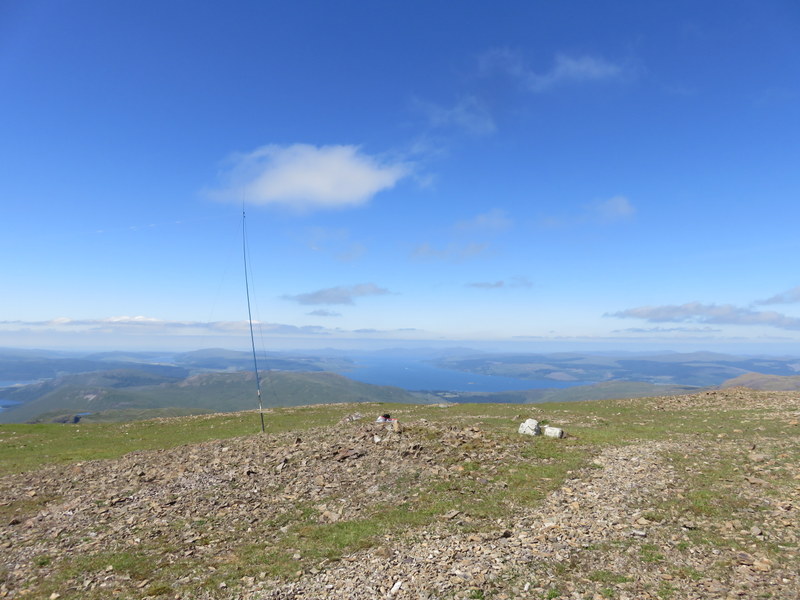 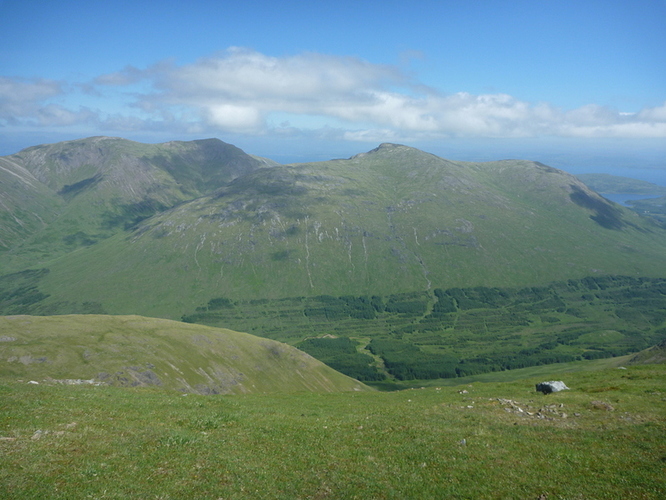 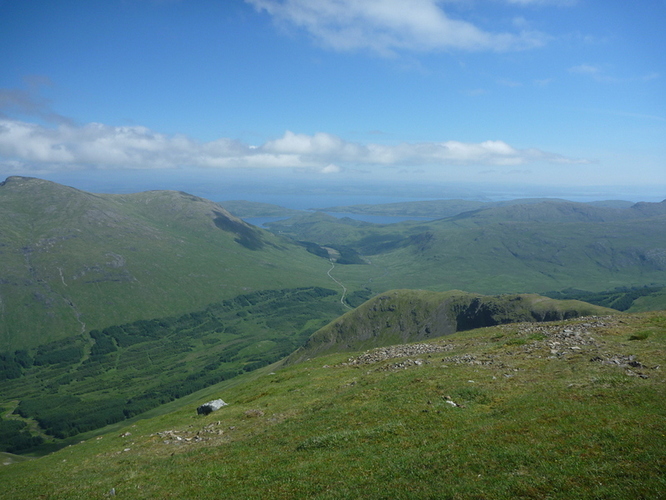 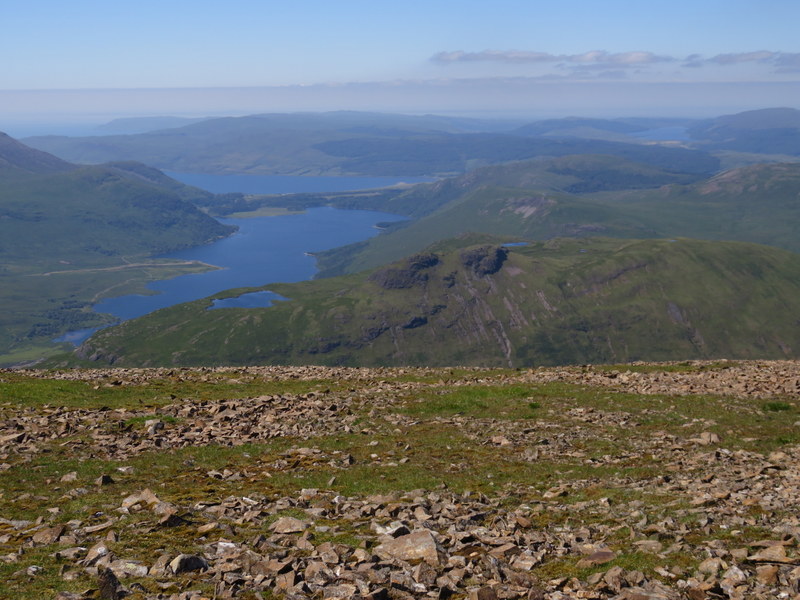 When radio had dried up we descended to try to get another summit in. We contemplated the direct route to Sgurr Dearg, be decided it looked very steep, and we understood there would be deer fences to cross, so we retraced steps back to Maol nam Fiadh. From there we varied the route by descending to the col Mam Bhradhadail, and then down by the stream back to the stile by the deer fence: probably not a lot to chose compared to the ascent – less steep but some bracken to contend with.

Back at the car Sgurr Dearg looked very inviting, but we calculated we really didn’t have time to do it. Another calculation ruled out Carn Ban (less height but longer walk in). It was too early to be heading back to the cottage and we fancied a coastal walk to follow the 4.5 miles for Beinn Talaidh.

From the Garmony Point parking we took the path northwest. It was pleasant by the sea with a slight breeze, and the path started off by the sea, but soon entered forest, with fewer views than we had hoped for. In the hope of more sea views we decided to try to get to the Fishnish Ferry. On the way we found a large 3 phase transformer dumped by the side of the forest track some way from any electric supply: odd. Soon after that we spotted another Vanessa trig point – this one at 5m by the coast at Rubha Leth Thorcaill. We tried to work out if we could get to it, but there was too much awkward terrain, so we stopped at a viewpoint to eat our apples overlooking the trig point. We marched on to the Fishnish jetty: the last ferry of the day had gone but we got good views along the Sound of Mull. Our little extra walk had been over 5 miles – longer than the main walk! 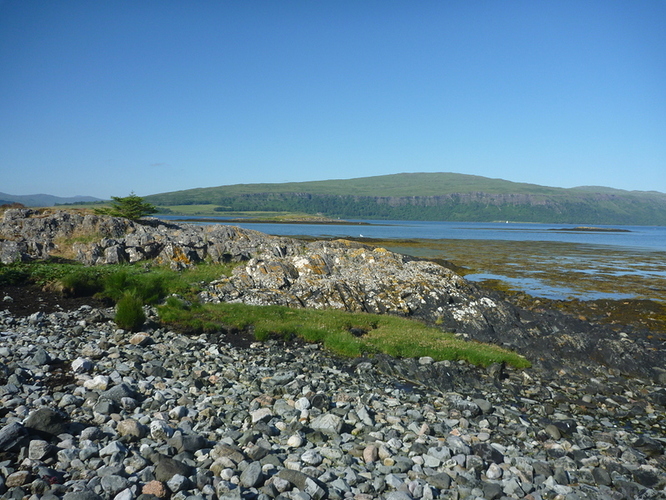 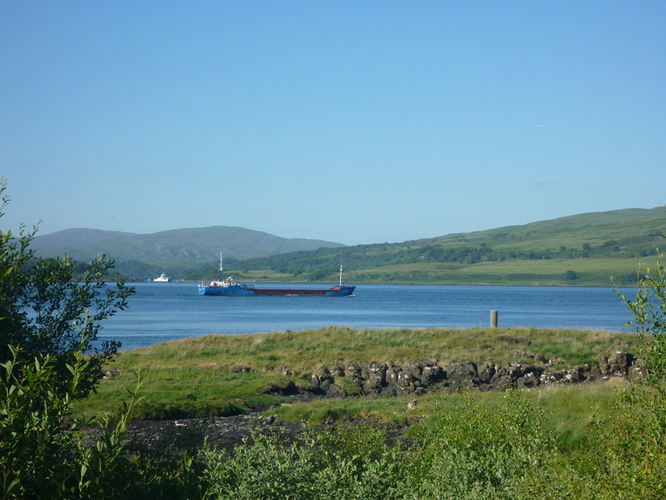 Many thanks for another excellent report Caroline. The detailed information on the route up will be noted. Paul and I didn’t manage to include this summit when we were on Mull in 2016 even though we could see it from the cottage we hired. There are plenty of summits to lure us back to the island.