You can’t win them all. Missed you by 5 minutes for s2s on 60m…looked at my phone, gave you a call but you had gone

Thanks to all the chasers on both summits and all the s2s.

I saw your self-spot for 5.3715 whilst still walking up G/LD-041. At the summit I raced to put up the EFHW to try to catch you in time. It didn’t help that the pole fell down before I even started. By the time I was QRV on 60m I think you had QSY’d to 80m. It’s a pity if you tried to call me after I had finished with the other chasers and QSY’d to 2m.

I went with the nelson_antennas deluxe roll-up

The problem with that is it’s tuned for the American 2m band - if you built your own it would probably be a better match here in the UK.

I completely agree. I have a RH770 too

One more for the RH770. A conservative estimate puts it +15dB higher than the stock antenna on my IC-V80. Definitely my go-to 2m antenna these days.

Electrically very good but mechanically delicate. My cheap Chinese clone RH770 fell apart mid QSO (but I managed to push the sections together again to complete the activation). My 2-to-3-times-the-price Diamond version is still going strong. But I’m very careful not to stress it and don’t walk about with it at the summit.

I don´t like use large telescopic antennas because they can break the walkie housing. This kind of antenas make a lot of lever on the antenna conector and can brake it, specially with strong winds.

Well. Since we are now talking about colapsible antennas, the MFJ Long Ranger works great.
I have had many contacts over 85 km with one.

Jon, you raise an interesting point and and an excuse for me to bore everyone with a [short] story …

I’ve always felt anxious about the (long and heavy) RH770 waving about in strong winds and what that might be doing to the HT or the BNC-to-SMA-m adapter needed to mate with the SMA-f on my Yaesu HTs.

A few months ago, I had two failed activations carrying only my 2m HT. In both cases it turned out to be the BNC-to-SMA adapter (the silver-gold type in the photo) – the SMA pin had broken off (both times mid QSO). I can only assume that the rocking motion of the RH770 was stressing the adapter’s SMA pin to breaking point. 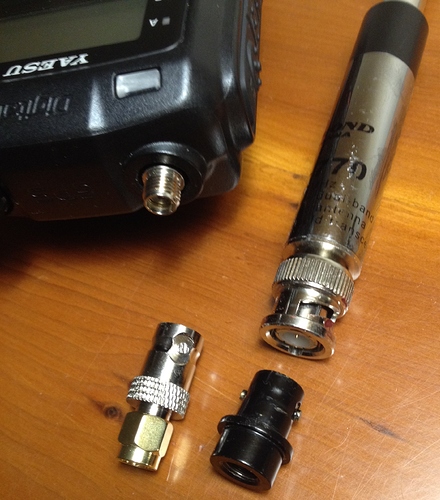 Reporting the cause for my failed activations on the WOTA blog, two people recommended a different type (the black one in the photo) which they said they had used with long antennas without a problem for many years .

I’ve been using one for a few months now and no longer get the wind-wobble problem as the adapter’s shroud fits around the sma-f connector and snugly onto the HT’s top surface.

But even with the new adapter I’m careful to use the RH770 only when stationary at the summit.

You better solder to nut to the rest of the tiny adaptor. This will prevent the pin from breaking. Knowing this well, I once said: Hey, let’s solder the brand-new adaptor tomorrow! And it broke on first use. OTH, I never had issues with solder-fixed adaptors.

Walking in glasses is a pain as sweat runs onto them and they get in the way or fall off.
It’s a real booger getting old…

Thank you, Andy! Now I know that the real pain in the 4R53 is glasses. Since I’ve had mine since I was 9, I’m not afraid of getting old anymore.

I obviously tempted fate posting that because even the new type of adapter failed on me today whilst activating a WOTA summit. I was calling CQ for a while and getting no replies so, as a check, I tried the local repeater but nought! On inspection I could see the SMA pin had broken off the adapter.

Fortunately (once bitten, twice shy) I always carry the rubber duck now. One chaser could just about hear me but I had to leave my comfy leeward shelter and walk back to the cold and wind at the summit cairn so that others could hear me.

Bit of a dilemma this. I like the Diamond RH770 ½-wave telescopic a lot - it’s high performance and very quick to deploy. A short flexible cable would help but I would have to hold the antenna. Think I will get another adapter. But I’ll also order another Chinese clone RH770. It might fall apart like my old one did (but at £10, what the hell) and they have a SMA-m connector (like the rubber duck) not a BNC and attach more firmly than with the added adapter.

I have seen various SMA to BNC adapters similar to your second one and have used a couple of them so far without an issues. However you might need to shop around an find one that fits you radio in the best way possible - i.e. one that fits snuggly on the SMA and down to the case of the radio. without being loose or having an gap between the base of the adaptor and the radio.

I think any time you have connector pins breaking it is a sign that high levels of force are present, created by using a large (non standard) antenna with a very small instrumentation connector, mounted on a plastic radio case and internally connected to a track on a pcb. It is fortunate that the adaptor broke as otherwise the connection to the pcb may have failed. And the stress may well have already stressed that connection. Continuing to tempt fate is a brave move.

SMA dont have the strength and brutality of the UHF connector series and I don’t think an sma connector on a plastic radio case can be expected to handle the forces of hand held operation with a long antenna.

A safer setup would be to mount the long antenna on a separate pole and connect that antenna via a cable (with a loop in it) to the radio. That would Isolate the radio mechanically and protect it from the leverage of the long stiff antenna and would allow you to connect a full size dipole to the radio, elevate the dipole somewhat and get better performance as a bonus.

Suitable poles are readily available via the auction websites As telescopic fishing poles and are cheap and light.

Hi Stu, this one does fit snugly on the case of the HT. The UK dealer even advertises it on a Yaesu HT on their website. See photo … 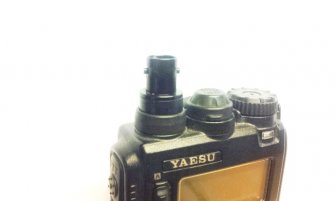 As I said earlier, some activators have used that adapter type for many years without problems – maybe their antennas are not so long nor so heavy as the RH770 or don’t use them as often as I do.

In any case, I’ve ordered a Chinese clone RH770 (which has a SMA-m connector) which will mean I don’t have to use an adapter with it. I can continue to use my current Diamond BNC-terminated RH770 with my 2m Mirage 35W portable power amplifier.

allow you to connect a full size dipole to the radio, elevate the dipole somewhat and get better performance as a bonus

Hi Andrew, I’m not sure that’s going to be any / much quicker than deploying my roll-up J-pole on my telescopic pole (see my earlier comment at post 15 above). And as I explained in post 17 above I either use the J-pole (in marginal coverage / sitting in a wind shelter) OR the RH770 when I need a quick deployment / activation.

Yes I understand it won’t be quicker, probably won’t be as convenient as plugging in the bigger whip to the radio. The trade-offs between convenience, safety, price, performance and weight are always up to the individual operator.

edit: acknowledging your use of the jpole when you need better range.

The trade-offs between convenience, safety, price, performance and weight are always up to the individual operator

I agree. And for me, there’s not one VHF solution that suits all my activations / WX conditions, but three:

Mount the bigger antenna on your rucksack and run a cable to the handy. Then your antenna can flex about (until it breaks) without straining the connector on the radio and breaking that. I’m happy to start a book on how long you can wave an RH770 about on a handy until the handy socket/pcb fails.

Someone used to sell a BNC female socket on a mount that used a big Bulldog clip to attach it to a wing mirror mount. Barry GM4TOE had one.

This with a BNC or SO239 socket could be attached to your ruck sack frame if it has one. Or the the fishing pole. You can have the antenna deployed and talk as you walk.

Thunderpole Door Mirror Mount. A fully adjustable CB Radio antenna mount designed to clamp onto the arm of a mirror that can be set to any angle.

Pedestrian Mobile like Phil (G4OBK) does it. I can see the appeal if you’re doing a multiple-summit day and want to minimise your stay at any one summit or listen to the calling frequency en route [none of which I do].

Without getting into too much detail, I have three sizes of rucksack which I choose depending on type of activation. I really appreciate using the small or medium-sized ones. The big one is for wild camping (SOTA gear + tent + sleeping bag).

In summer (with no Bothy bag, over-trousers, gloves, hot flask, etc) it’s a joy to take the small rucksack and it’s not very practical to attach an antenna to it. I also like to be discrete when I’m out SOTAing (I’ve had groundsmen / factors ask me what that pole sticking out of my bag is for).

For Solution 1 [quick deployment / cold WX], I’ll take the risk that the Chinese clone RH770 with SMA-m leads to any long-term problem with my FT270 or FT1D.

Someone used to sell a BNC female socket on a mount that used a big Bulldog clip to attach it to a wing mirror mount. Barry GM4TOE had one.

Built like a brick outhouse and has survived many an “adventure”

Except, Barry, that link doesn’t seem to point to what Andy was describing (and I would buy if available). That product is a small 2m whip antenna mounted on a clippable bracket.

I want something that lets me use my RH770, i.e. the clippable bracket with BNC-f socket connected to about 50cm of coax terminated in a SMA-m. Unless someone can point to a supplier, I might investigate making one.