Nobody has been up this for SOTA since Jack GM4COX went up it in Feb 2006. There’s a reason… it’s probably the hardest 2pt summit I have done.

An early start and a dash to get to the car park at Inverlochlarig where there is space for 15-20 cars. At 8.15BST I was number 6. It was still full when I got back to the car at 16.16BST! The road from the A84 is being resurfaced and is closed on and off for the next week, it’s open at weekends. The resurfaced part is smooth like a pool table. Just one problem, the drop off the Tarmac onto the passing places is about 8in which is more than the ground clearance on my car

The target. You can go up the front. Jack did it that way but he’s not right. If you do go this way expect to climb over 520m in 800m forward. Madness! 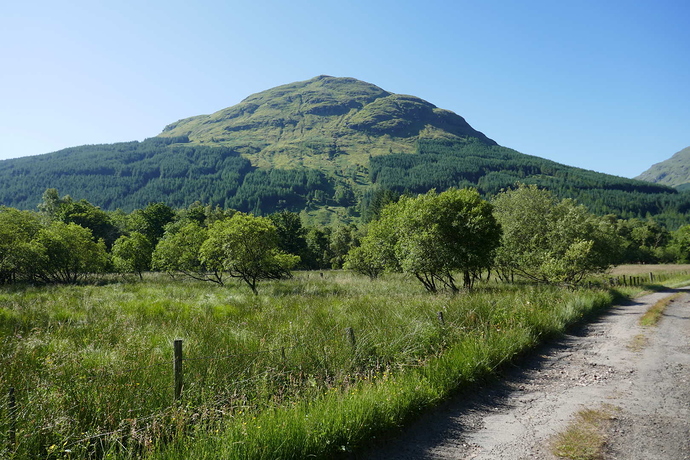 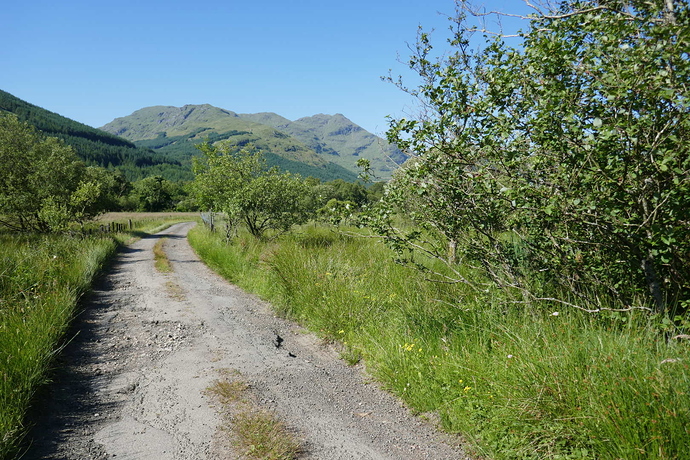 I avoided the seriously steep ascent by walking about 3km down the track between Stob Breac and Stob a’Choin then up a very steep firebreak and rising traverse to the summit. This should take 2hrs. It took me 3hrs 15 because of the unreal heat and the fact my legs would not obey my brain… they thought I’d gone mad going up the steep ground in this WX. Seriously, I knew it would be hot so I had more water. I made sure I knew where all the potable looking streams were so that once I left the forest I knew I long to make the water last before I could top up. That plan was the most sensible thing I have ever done when walking because the heat was amazing for us people who never see the sun. 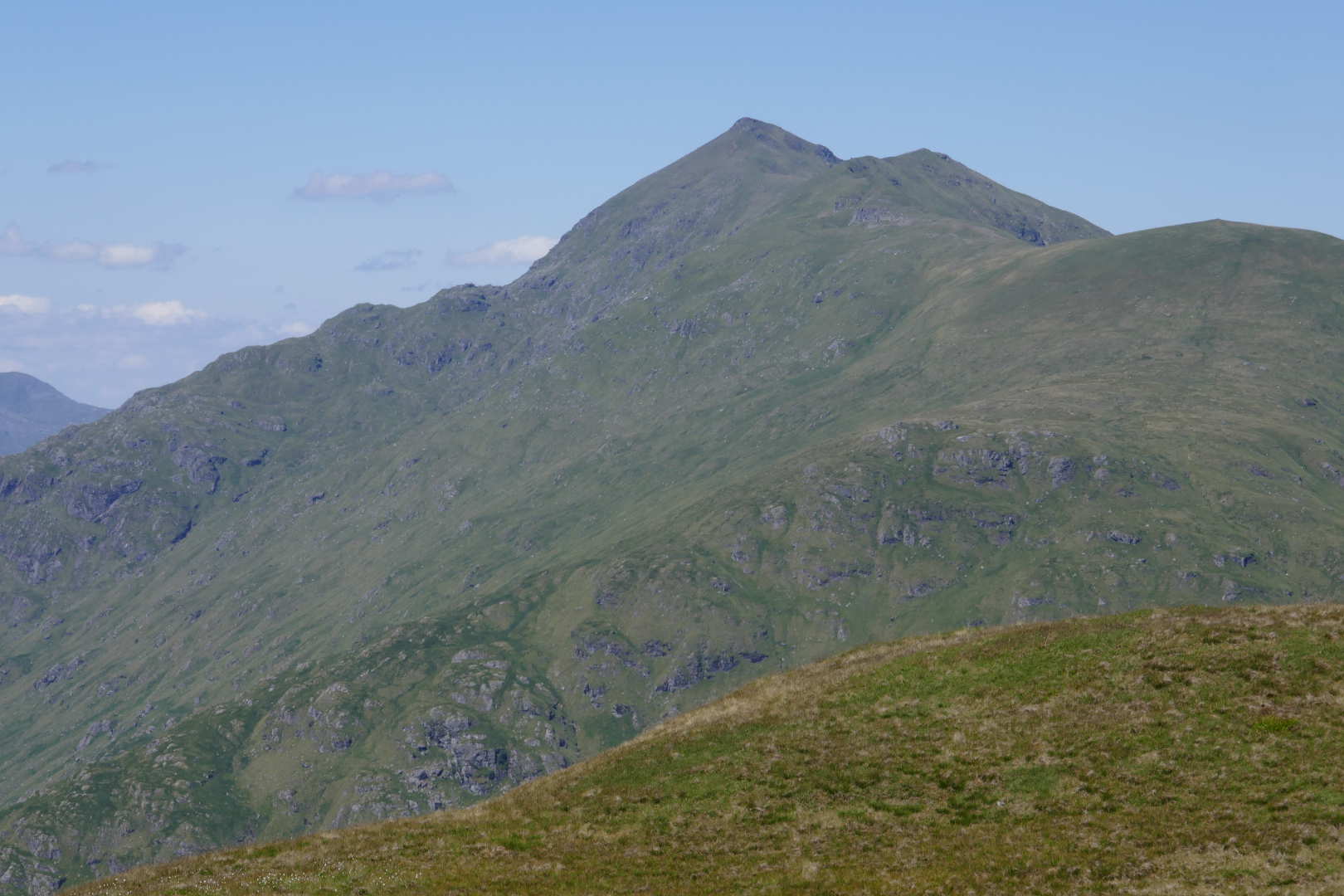 Not many stones at the top, some fool has carried these some distance to build a wee cairn! 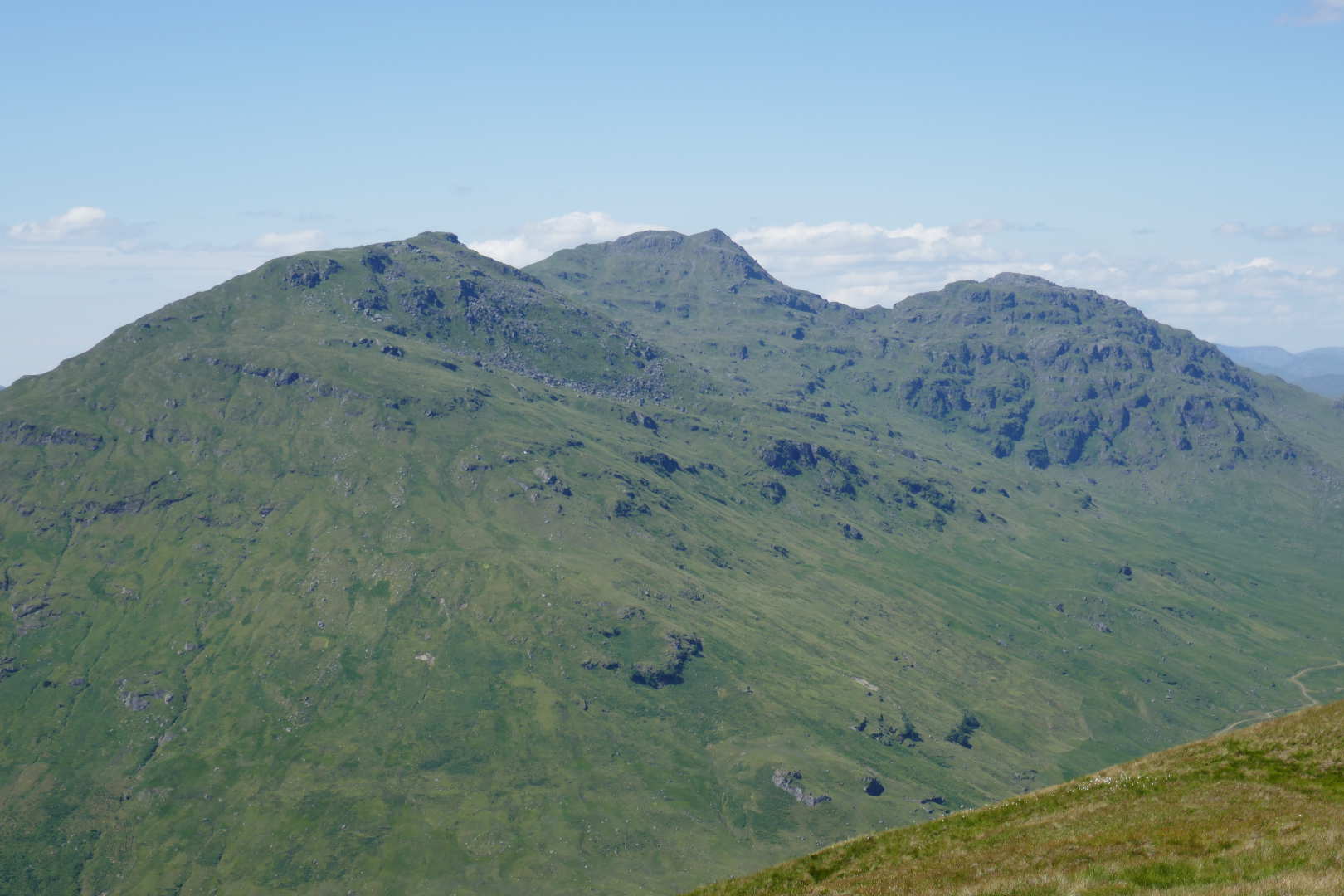 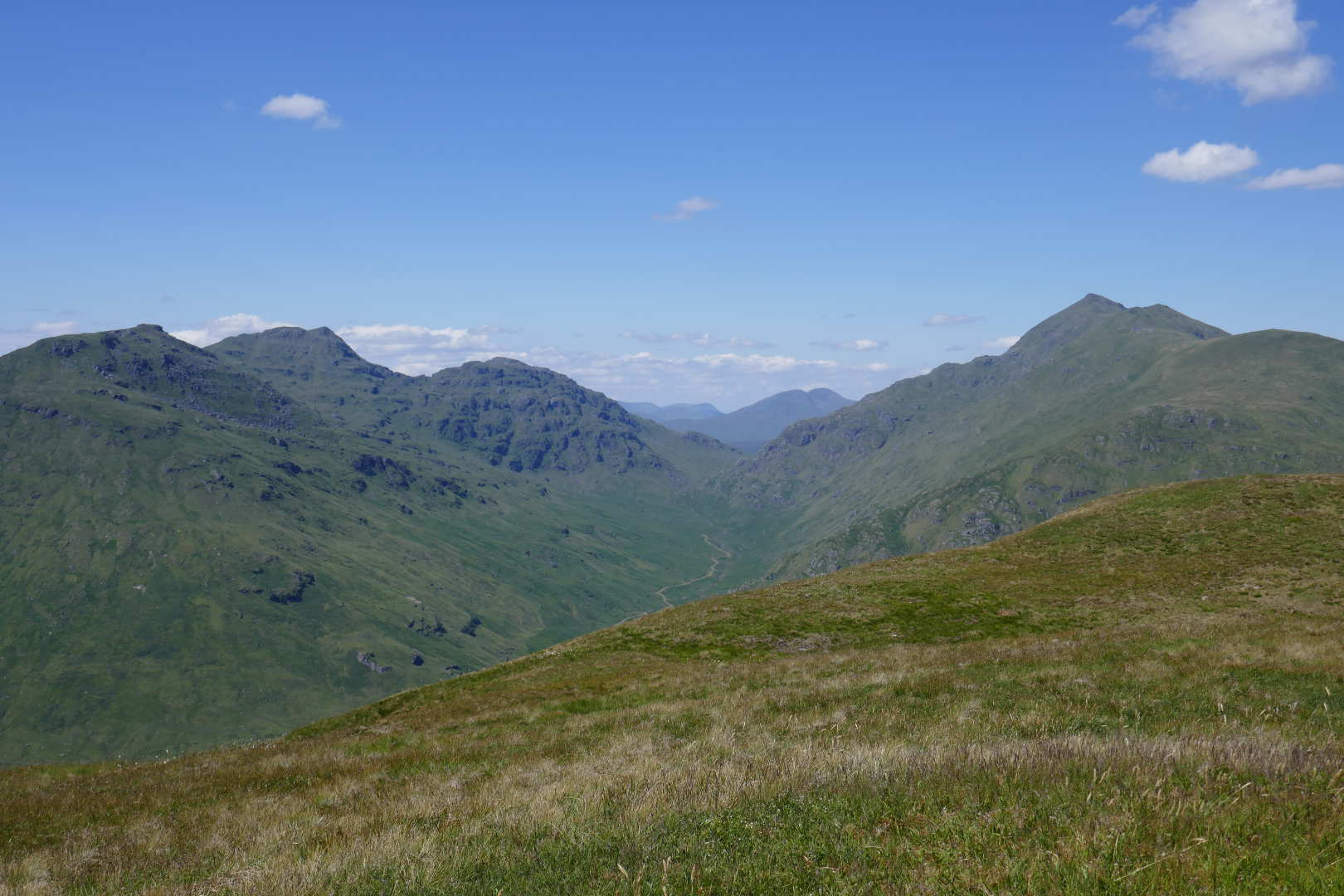 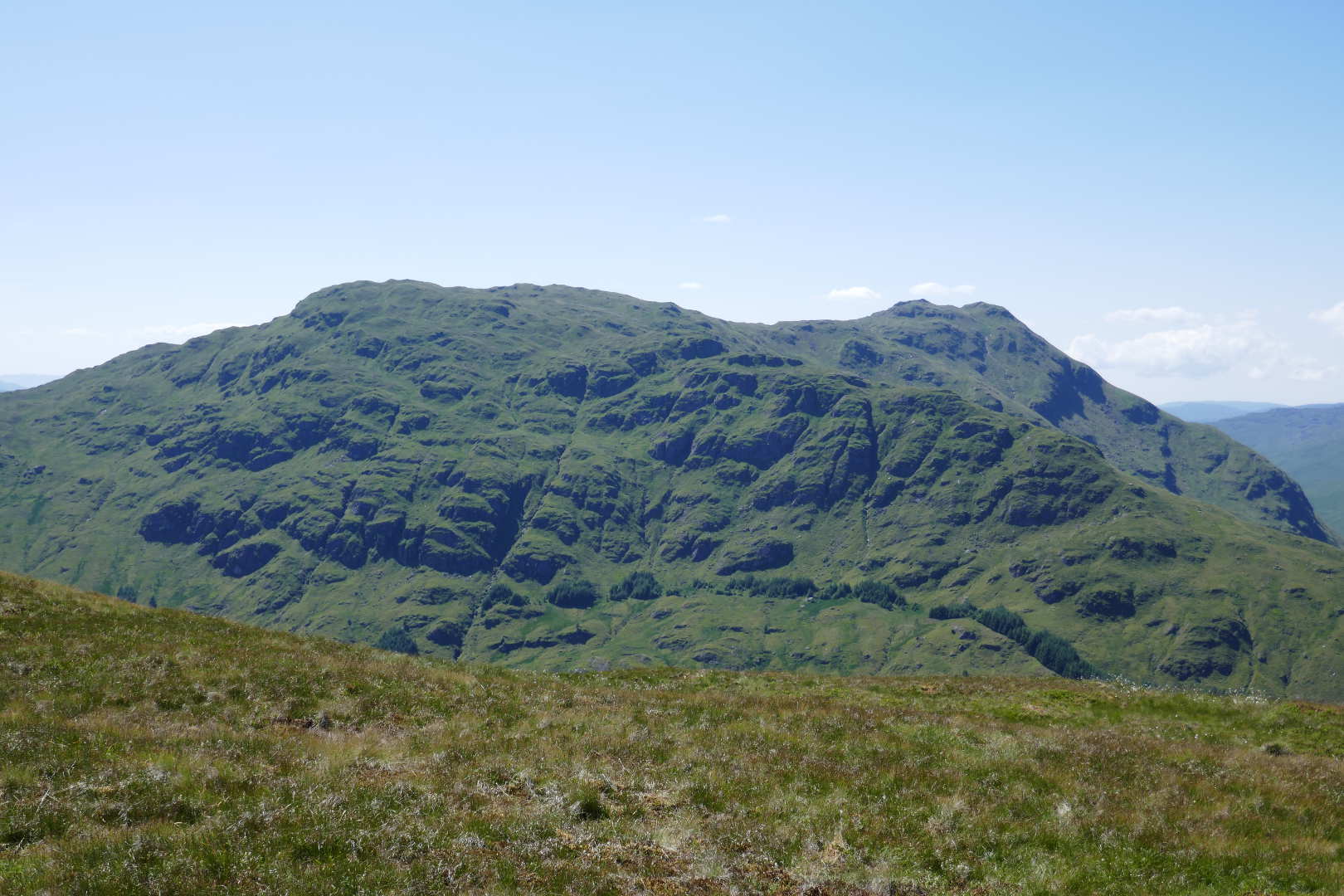 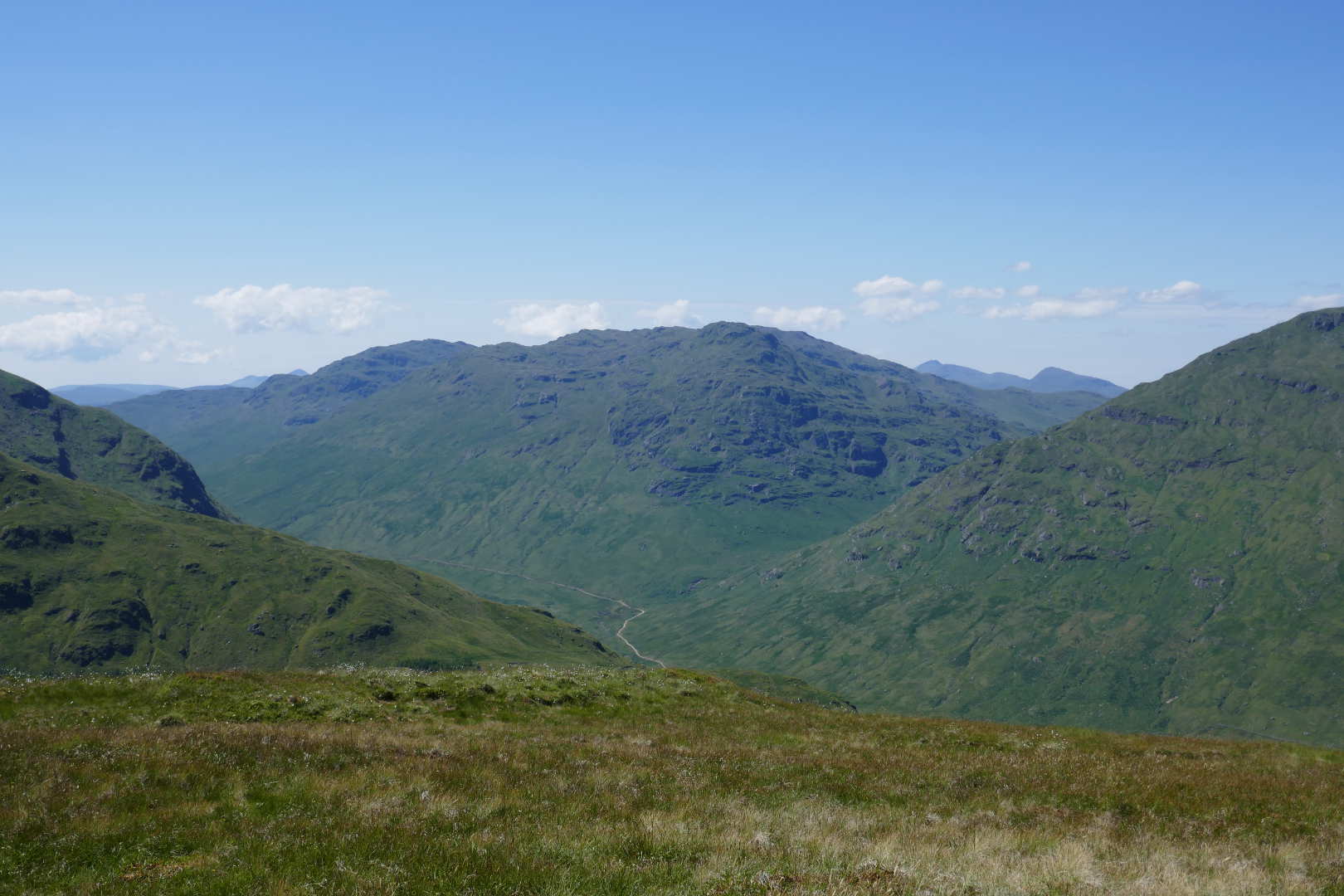 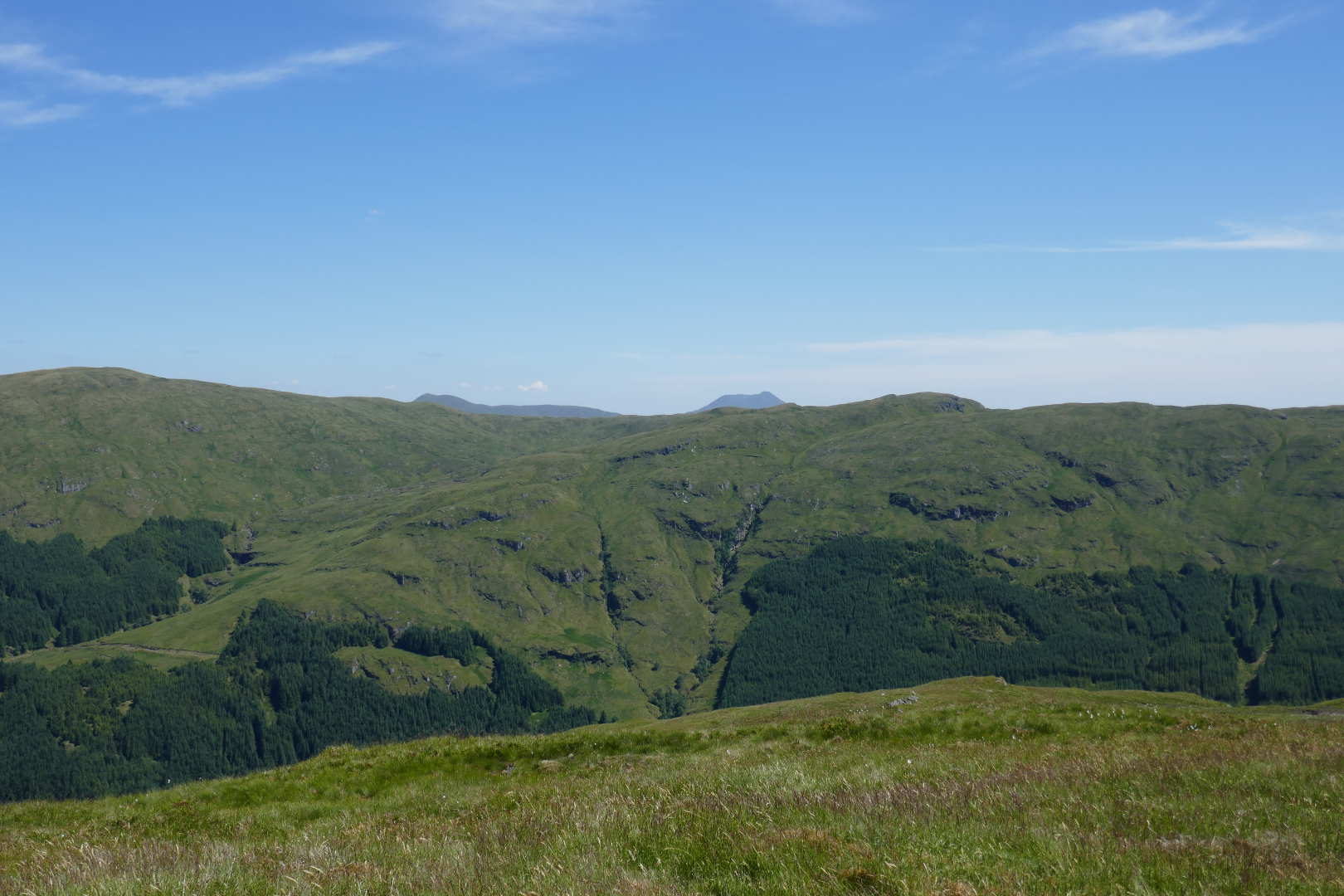 Smiling through gritted teeth having got to the top! 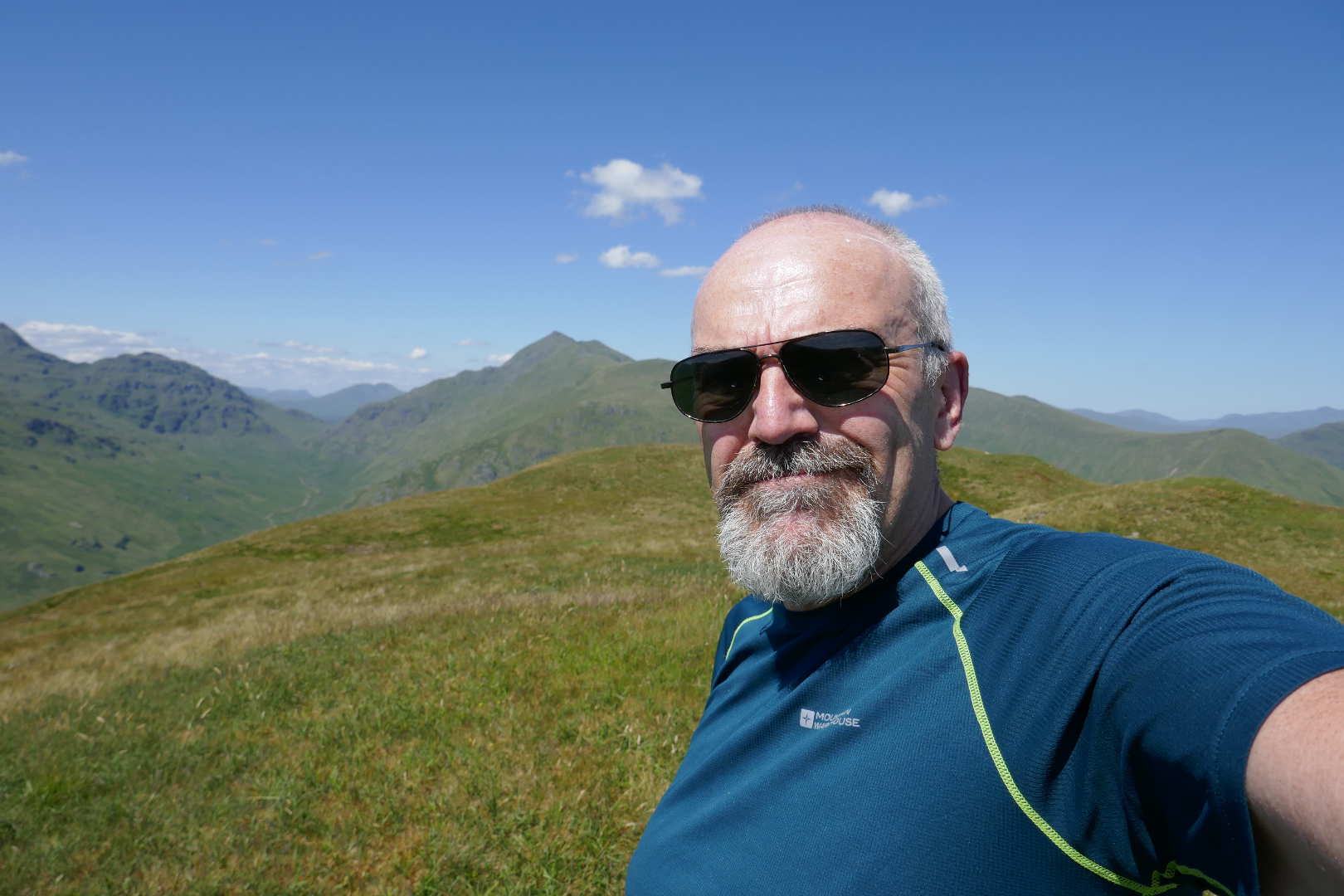 Looking South along Stob Breac’s bumpy and undulating ridge. Its up and down by 40m for a couple of km. The knobbly hill in the middle distance on the left is Ben Venue GM/SS-058. 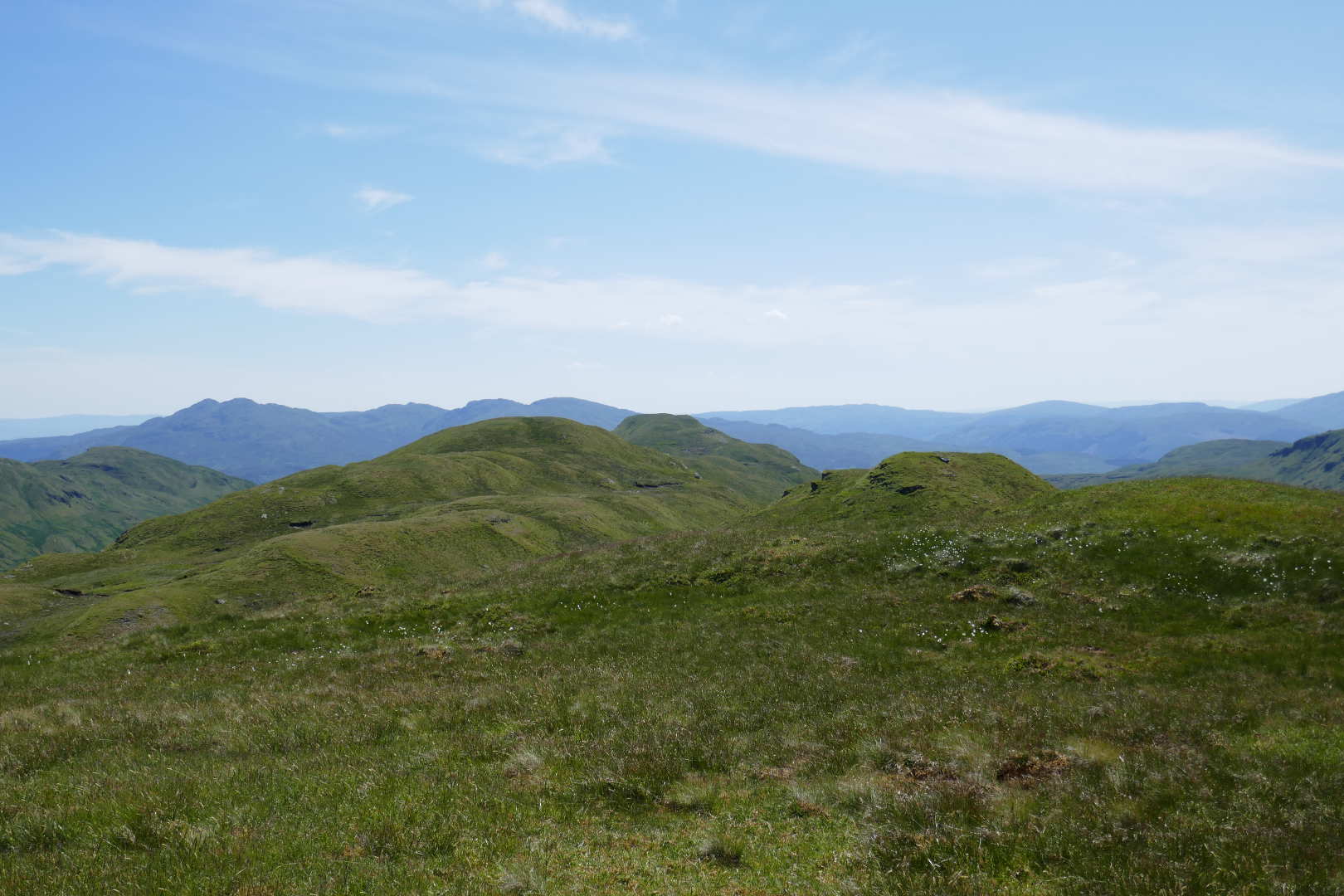 A look back to the summit on the way back. This must be horrific normally as there were so many dried up bogs. You can see a huge spread of white Bog Cotton plants. But today it was crisp and dry mainly. 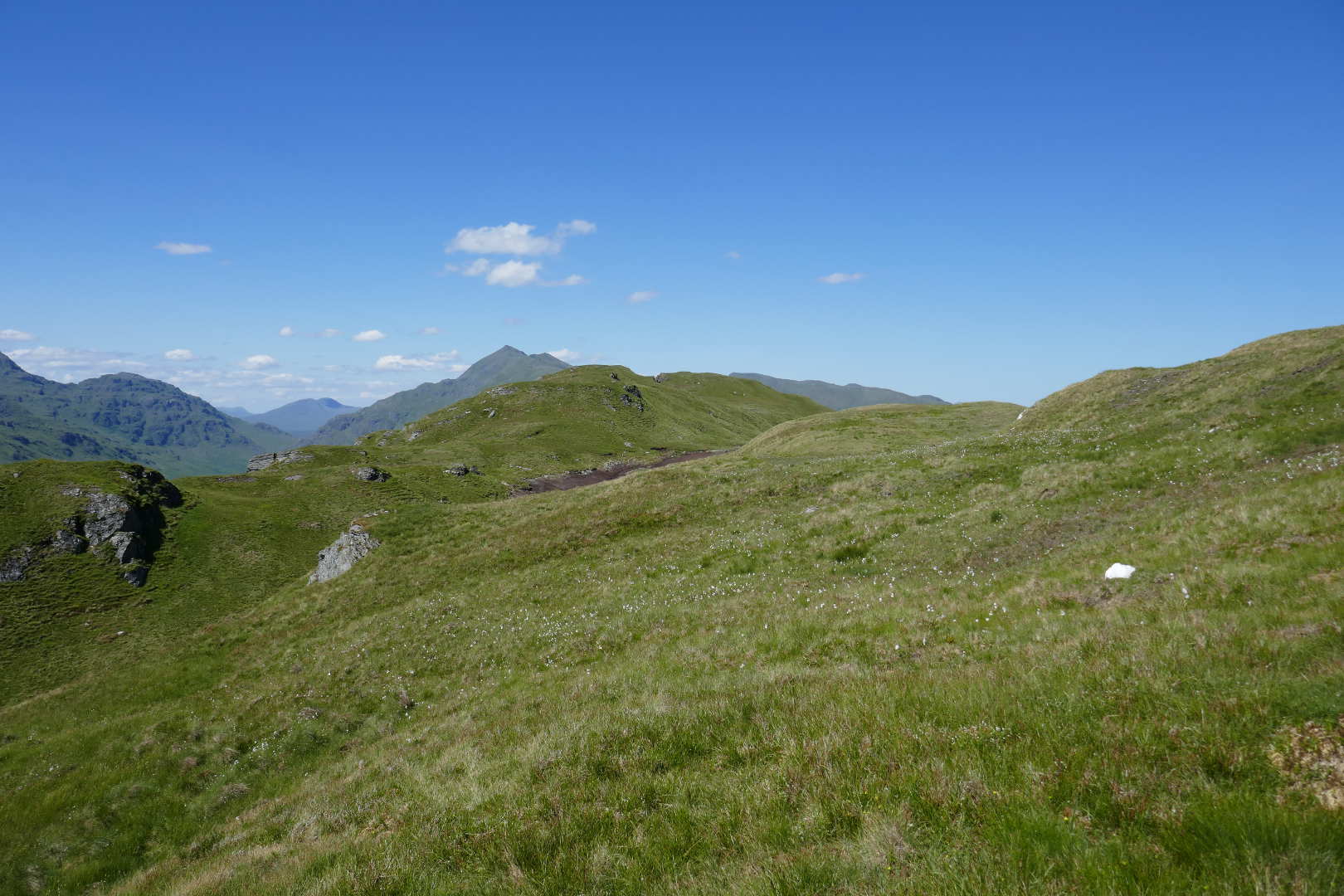 A stupidly steep slope to climb in the heat. You can see the plantation I walked through after climbing 100m or so from the car park. I came up the firebreak marked with a red line. Like an idiot and armed with a GPS that I checked I went down the firebreak marked in yellow. I had the GPS map display zoomed in so the fact I was in the wrong break was not visible. It became visible to me when it became very steep going down and I remembered there wasn’t damp stream run on the way. Too late and tired to go back I struggled down to the track. Lots of water from the streams consumed and poured over my head. How can water that has run down the hillside be almost freezing when it was saying 26C back at the car? 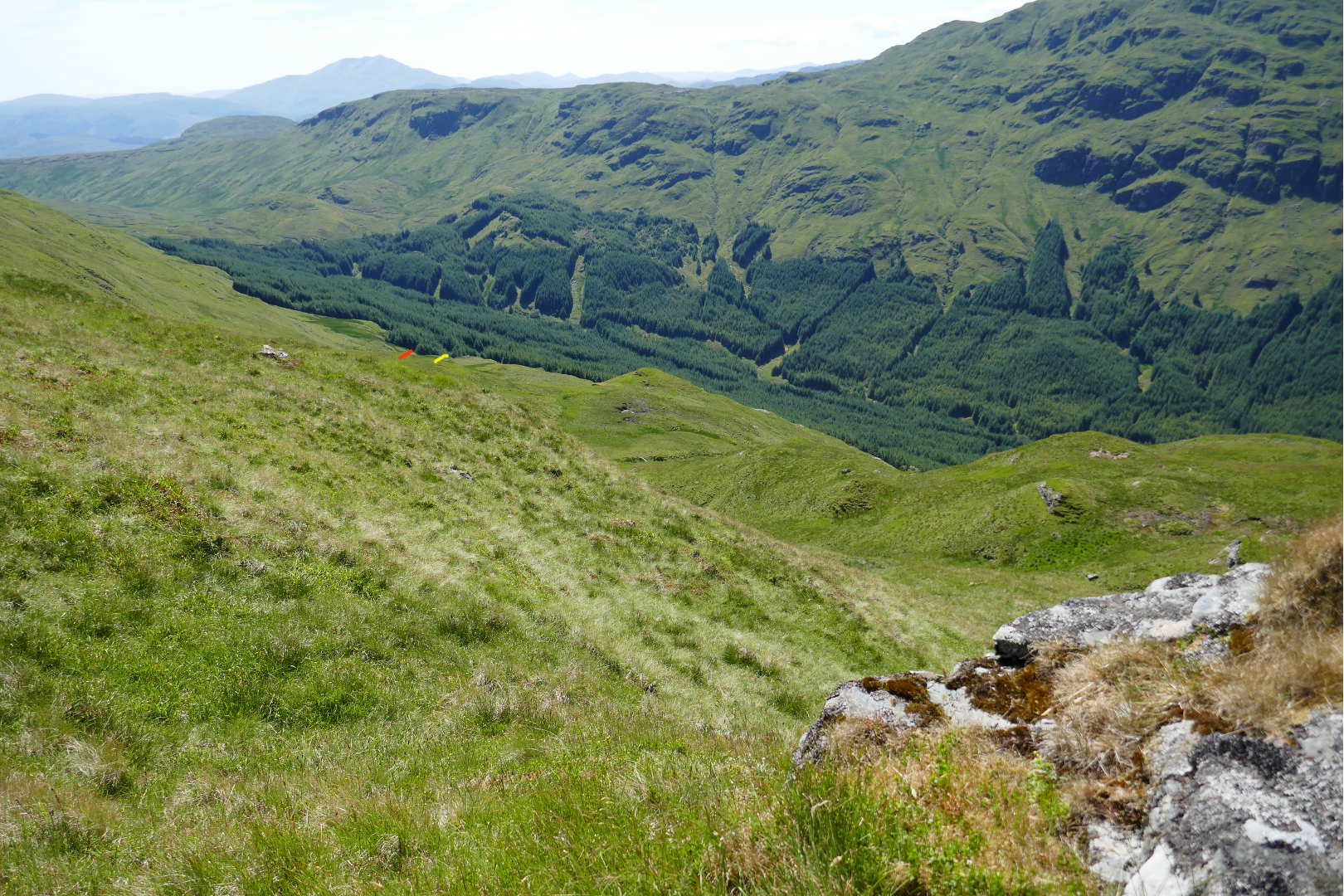 Radio? You don’t want to know about the radio do you? OK, 3 worked on 13cms, Jim MM0GLM/P on SS-085 for an S2S and complete. Jack GM4COX from his QTH and Mark GM4ISM from near Larkhall south of Glasgow. Mark is a serious microwaver (6cms EME amongst other things) and was a good signal for 5W to a modified commercial patch antenna. I think I heard GM4DIJ sending CW briefly. After that 30m and 20m produced 18 more QSOs. ODX being KA1R who was 599+ on 20m.

Jack waited 12 years to complete this. I’m not surprised. There again, doing it in this amazing weather made the pain in the knees and legs worthwhile. I did apply plenty of suncreme and Smidge so was OK. But, boy, was it hot.

Thanks for the pictures, Andy, they bring back myriad memories! Its a wonderful area, but I have only seen it once in similar weather conditions, IIRC that was September 1973 just before I went on a rock climbing course in Glencoe! What were the red and yellow things just left of centre in the last picture?

Dammit, I’ve been humping watering cans all evening, fifty-odd rhododendrons were very thirsty, the work has affected my comprehension!