I’d reconnoitered this summit back in October, but the weather then wasn’t co-operating. Last Thursday I approached the summit from Bienenschmidt, which looks like it might be a hospitable place at times, but which looked very thoroughly closed on the day. There wasn’t a particularly clear path to take, so I headed uphill through the woods approximately on the right bearing. There were, in the woods close to Bienenschmidt, a few forlorn pocked wooden animal shapes, presumably used for target practice of one sort or another (I suspect field archery) when the place is open. About a hundred yards uphill I found a path that more or less followed the contours, but that seemed to be heading up in an appropriate direction, so I followed it until it looked like it was heading away from the summit, and then set off straight uphill again. The summit itself is wooded, with no view, and there was a chilly breeze blowing. There is also, it seems, a path that runs along the ridge, and the track I’d been following does have a branch that meets up with this track just a little way south of the summit, as I discovered when I set off down after the activation. 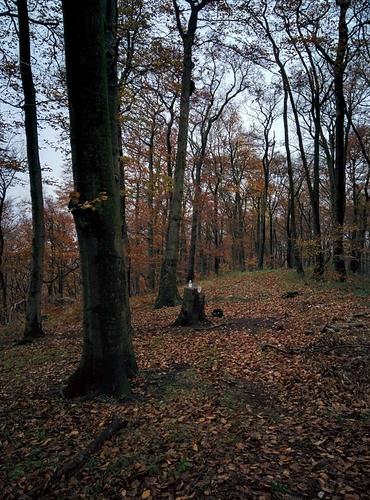 I’d had to travel with the bare minimum of kit, which meant earphones rather than enclosed headphones, no external battery, no pole, and a lightweight Sotabeams Bandspringer which has had its main element replaced because I snapped the original. A light branch came in handy for stringing the antenna. My KX3 will usually match it tolerably (though it’s obviously less effective than a dipole), but as the KX3 was running only on (freshly charged) internal batteries, it was soon down to 5 watts. I also didn’t have my handy steel baking tray, so I had to hold my Palm Paddle in one hand while keying it with the other. The combination of earphones, insecure paddle, background noise from the breeze, and some low-level but annoying QRM/N, made the activation rather more of a muddle than it should have been. I think the wind chill probably didn’t help, either.

I started on 40 metres CW, relying on RBNHole to spot me, and it seems it did, as I was soon getting answers. I struggled a bit more with the Morse than usual, then forgot to try SSB, and called it a day when I didn’t get any quick replies after a QSY to 30 metres, as the wind chill was biting. All in all, a sub-optimal activation. I missed the comfort and convenience of my usual SOTA pack’s contents (especially the small light-weight folding seat), but at least I did get more than four QSOs, and one was a summit-to-summit, too.

Thanks to all who called me back. Apologies to those callers I missed or messed up. I hope I’ll manage better next time… 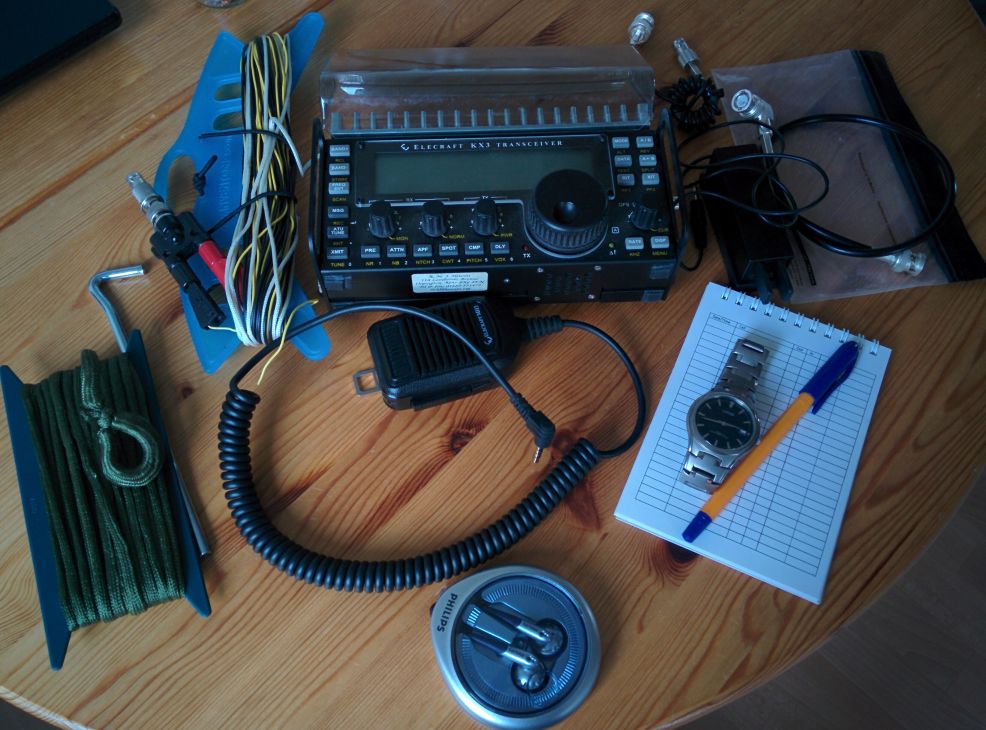 Un-packed the bag, and this is all the kit I was using (if you don’t count the tree I used as an antenna support, and the rock I used to lob the line over the branch). I did have a spare tent peg somewhere, too. I need better earphones if I’m going to do this again. Those ones were rubbish.

Show us your rig!
KX2/3 w/tuner owners: what antenna do you use?