After researching a summit with multiple approaches, it was very helpful to one day see the “blue line” for GPS tracks in SOTLAS (sotl.as). I’ve seen GPS tracks in various websites, blogs, etc… but loading tracks to SOTA Mapping Project (SMP) is a great way to have all in one place…and visible in SOTLAS. (Please see the help link within the various SOTA Mapping tabs for additional information)

If you activate a summit without GPS tracks uploaded, thank you for taking a few minutes to upload and share with other activators. Thank you, and 73. James WA7JNJ 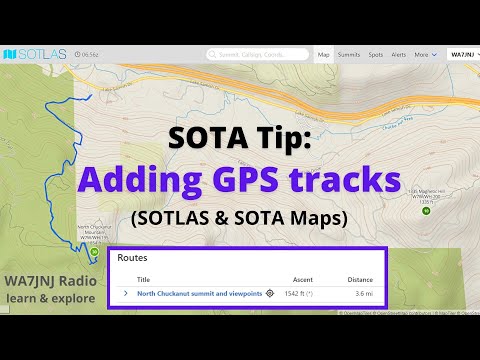 Excellent.!
Thanks for this video.
Gerald F6HBI

These tracks are a big help in W7W-land. So many of our summits have only been activated once or twice, often with ambiguous descriptions of how to get to the summit. Having the ability to download a track from someone who was there previously, or to create a track for the next activator are equally brilliant. PeakBagger.com is another source I’ve used for SOTA, which can be downloaded to Gaia GPS.

If you look at Georgia or the Carolinas, a lot of the summits have tracks. This also helps to determine how difficult the hike will be as you can see the hike profile (distance and EG). I use this a lot even on summits I have done in the past to guage what kind of a hike to expect.
Ryan - WG4I

I think you can skip the summit selection step because the system is smart enough to guess it from the uploaded file.

Thank you for the fyi, and I’ll update the video description to make note of… 73 James

Sometimes handy to convert the gps file to a Google Earth KML files for the topology.

Thanks for the summary. Will bring us hopefully more tracks in the future.

One thing if you rework the video:
GPX files can have routes and tracks included.

Usually routes are planned (before the hike) routes and tracks are recorded during the hike.
Theoretically both should work but in reality only tracks work fine to import on SOTAmaps. There are tools like GPSBabel that can convert routes to tracks and in addition can reduce the number of recorded points. For long hikes (more than 1000 points) SOTAmaps will refuse the file.
So both things might happen to new users.

Great video, hoping for more people to upload tracks … just one or two suggestions regarding the video:

In the video you can see that the uploaded track has the same route for ascent and descent. 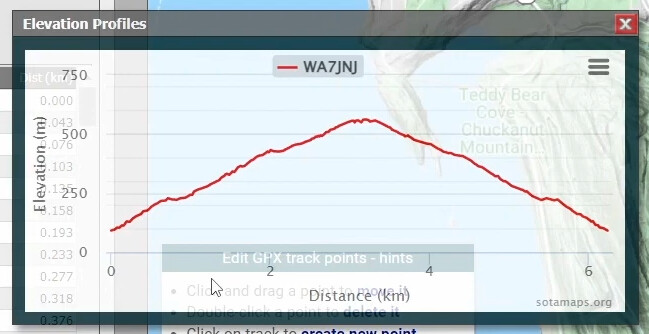 If I upload a track to SMP then I edit it before. I always cut out the descent leaving only the ascent. If I descend on another path that I want to share with the community I cut out the ascend and reverse the remaining track. If I don’t reverse the track the elevation profile will look like this one (which I find a bit confusing):

Especially when more than one track is uploaded for one summit it can get complicated. As an example it can look like this if two tracks only show the ascent and one track shows the whole round-tour:

In my opinion it looks a lot nicer if the tracks and elevation profiles appear like this: 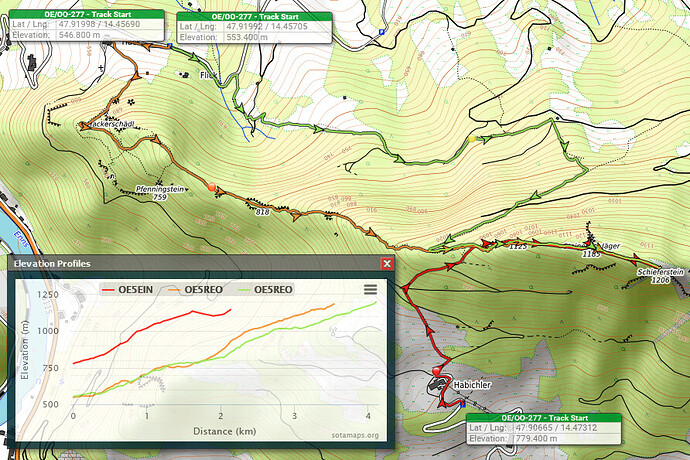 P.S.: Sorry for mixing ascent/ascend/descent/descend … really don’t know when to use a “t” or a “d”

To ascend: ends in “d” when it’s a verb. Eg. I always tend to ascend at a regular pace.

The descent: ends in “t” when it’s a noun. Eg I enjoyed the descent less than the ascent.

To descend: ends in “d” when it’s a verb. Eg. I always tend to descend using the same route I used for the ascent. (Notice “descend” is a verb here and ascent is a noun. That’s why the former ends in “d” and the latter ends in “t”)

Thank you for the helpful comments and examples, and much appreciated! After creating video, I caught the ascent only guidance in help section and made a quick edit to video adding the comment about recommending ascent only and pointing people toward the SOTA Mapping Upload tab help section. Video description notes have been updated to make this clearer, and I’ll continue updating based on feedback. Thank you again so much for the thoughtful feedback! 73, James WA7JNJ

Thank you Joe! Very helpful, and I’ll add both these notes to the video description. 73, James

To the last point (up/down routes), I tend to record two tracks when I’m doing a peak, the ascen(T) and the descen(T). Main reason is I want to see the speed heatmap, (i am actually slower on some descents if the angle gets steep, that whole shot knees thing). So, that is one option for ensuring you do have an up only for uploading to SM…