Being relatively new to the ham radio world , therefore , SOTA , and being based on the Western edge of the Lakeland Fells, my experience of activations so far has been typical of what you would expect in the area as regards summits and making contacts etc… We had to make a trip to the East Riding of Yorkshire last week and the decision to take in two “convenient” summits gave me a different and in some ways surreal experiences to what I’d been used to.
We stopped on the way to do NP-024 Hoove , a relatively short and easy ascent on a bitterly cold grey day it was about 3C with a very light NE breeze. There was no obvious High point at the top and we could see the trig point and what looked bizarrely like a statue about 300yds from it . While I set up, my wife went to see the statue. She came back and just said “It’s creepy” , turned out to be a shop window mannequin in a green protective suit strapped to a post. If anyone can tell me exactly why it was there or if they’ve seen it before I’d be interested, there was another one in the far distance. I’ll put a photo below. There were a lot of grouse about I assume it was some kind of scarecrow to ward off predatory birds like buzzards or hen harriers?
I called out for about half an hour and 2m was totally devoid of activity. I’ve been spoiled so far, there’s usually at least four familiar voices waiting for you on my home turf when you put out your call on 2m and I have no HF gear to speak of yet .
It was a pleasant walk though and made more worthwhile when I decided to access the HG repeater on Sutton bank if only to get a contact to justify setting up my antenna , and see if it was all working OK this resulted in a QSO with John from York, who strangely enough I’d spoken to a week earlier from my home through the GD repeater on the Isle of Man when he was on holiday in the Lakes and out walking one of our local fells with his hand held. Despite not activating the summit , it’s a small world and this made the day .
I see what was “creepy” about the dummy . Anyone old enough to have watched Dr Who in the 1970s John Pertwee era might remember the “autons” ! Mind you, I believe the dummy had as much success as I did activating NP-024 ! 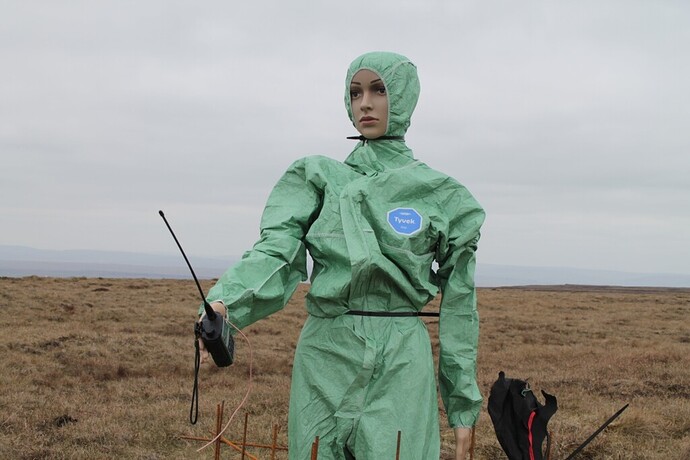 IMG_09901024×683 115 KB
The next experience was Garrowby Hill TW-004 I had much more success on the radio there but I’d always thought in my limited experience that the main hazard when doing a SOTA was a fall down a scree or a twisted ankle miles from anywhere , not , being run over by fast moving traffic! Particularly as it’s the main road to Brid’ on a sunny Friday afternoon at the start of a Bank Holiday . All good fun ! 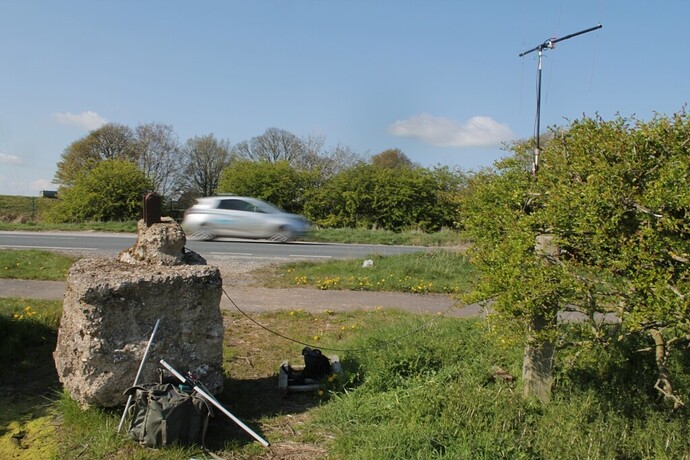 1st rule of SOTA when starting out: check how well other people have done from your chosen summit on the bands you will use. Looking back over the years, most ops from Hoove have worked around a handful of contacts on 2m. 4-8 being the kind of numbers being logged.

Looking at that summit on a map there’s a limited window of opportunity due to the prevailing high ground around about 70% of the summit. I wouldn’t have expected big numbers on 2m on this one, but that vertical beam should have helped. Did you have a spot and alert on SOTAwatch?

… most ops from Hoove have worked around a handful of contacts on 2m. 4-8 being the kind of numbers being logged.

Evening y’all
To do very well on 2m FM with a vertical and 50 watts from Hoove you need to have a North Pennines SOTA Day. There was one arranged for 04/01/2009 and I made 29 FM QSOs, including many S2S.

Gerald @G4OIG was on G/NP-015 that day. Some familiar, still active, and some callsigns now never seen doing SOTA in evidence:

If you have struggled to get contacts on 2m simplex it’s worth seeing if you can get some interest through the repeater. You will need to QSY to a simplex channel to get the SOTA points but it might attract some attention if S20 fails.

I put an alert on sota watch .I checked on one of those line of sight tools online to see where the most likely contacts would come from too but I guess there were just not that many people on 2m in the area , My contact through the repeater had said how quiet things were that day too
Both locations were just very conveniently located en route and accessible for the limited time I had to spare really and a chance for a quick walk including the radio .

A self-spot is 1000* times more effective than an alert in respect of helping to get QSOs.

[*Disclaimer - "some nominal big number, could be 100, could be a million]

Where’s that operating spot on G/TW-004. It looks 1000* times more pleasant than the horrible bit I usually end up operating from!

I parked in the layby atop Garrowby Hill beside the reservoir and trig point which is fenced off and crossed the road . Had a good few contacts from there on the day mostly from West Yorks
I left the other summit more intrigued by the mysterious mannequins than anything else !

I’ve operated from over the road from the layby too, but didn’t recognise that from the photo. Certainly not that lump of concrete anyway. I keep meaning to pester @G4OBK for a grid reference for a pleasant, peaceful operating spot within the AZ of G/TW-004!

There was a handy post to fasten the antenna to and the big concrete block made a handy desk for the paper work , but even with an ear piece the procession of trucks and Harleys caused a few audio issues at my end and the other , but then wind noise can be just as intrusive on the more remote hills I suppose.