I’m still a few weeks away from my next activation, and chasing is proving tricky with the high noise levels on the MV Spirit of Adventure. FT8 - love it or loathe it - is proving to be a mode that allows me to continue my hobby on a daily basis. Most days feature a CW sked attempt with G3CWI but with a less than 25% success rate.

Currently sailing into the Norwegian fjords (heading to Geiranger) and enjoying the spectacular views. I’ve no doubt I’m looking at lots of unactivated SOTA summits! 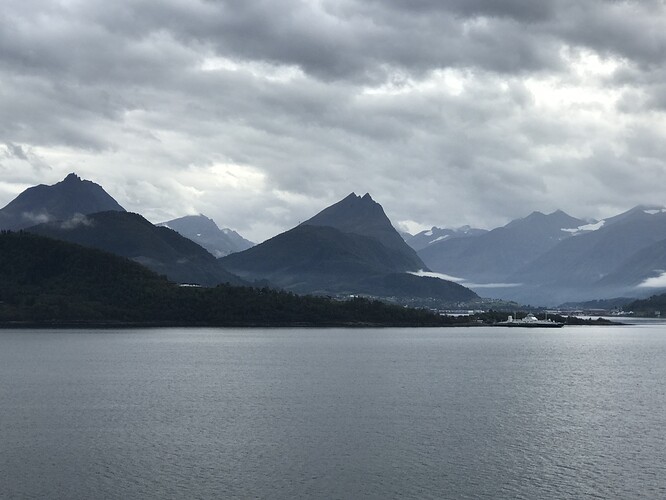 Nice view Tom which I remember well from my younger days.
Best 73

into the Norwegian fjords

Have you seen any Norwegian Blues flying about around there Tom? You don’t see them much back here as they tend to spend all their time pining for the fjords when removed from Norway.

Yes, their popularity outside Norway has waned due to their total lack of movement, as they are pining for the fjords. Their owners all think they are bereft of life.

73 de Martin / HB9GVW, also pining for the fjords and LA-summits

I have now actually climbed a SOTA summit while I’ve been away. Since 1st November, I’ve finally been allowed off ship independently, ie not restricted to a booked organised tour. 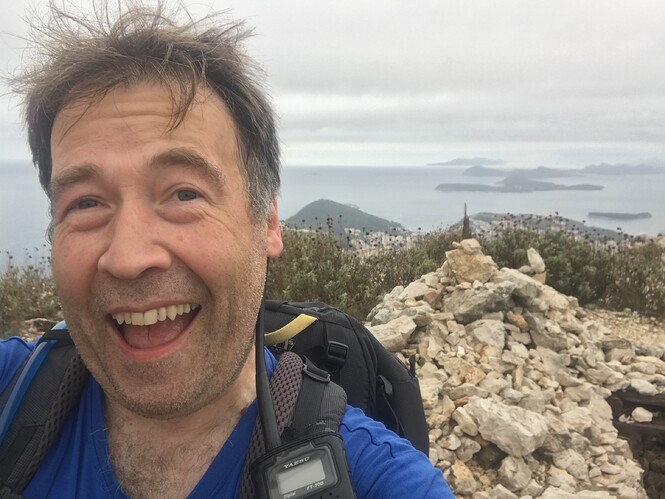 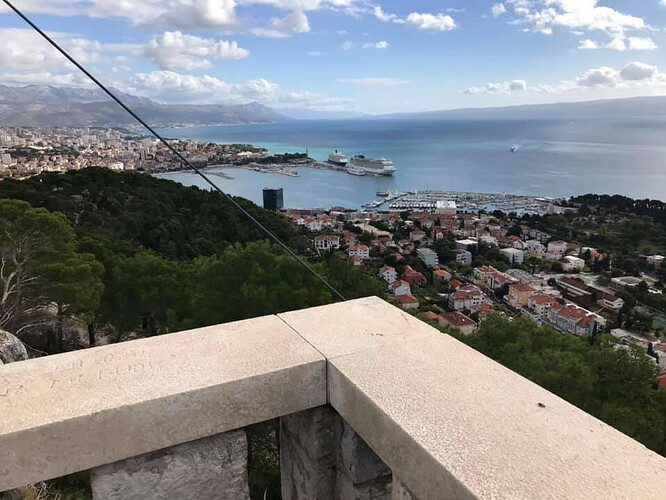 The previous day I climbed Telegrin to the west of Split, but this doesn’t appear to be a SOTA summit. It can’t be far off, being 178m ASL on a peninsula, but the higher ground through the city must force the prominence to be a few metres short. 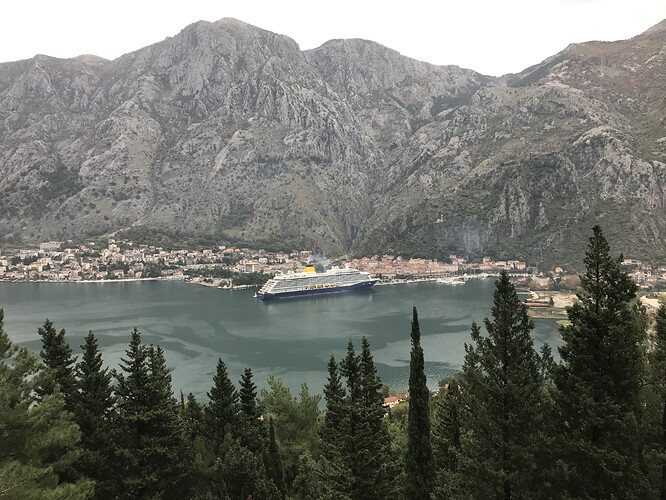 The next port call was Kotor in 4O, which was a delightful sail-in through Europe’s most southerly fjord. I climbed to Fort Vrmac, which was around half the way to 4O/JC-063, although there are higher and nearer starting points if using a car. It was still a stiff and satisfying climb up countless zigzags, affording great views of the stunning valley below - and the ship of course! 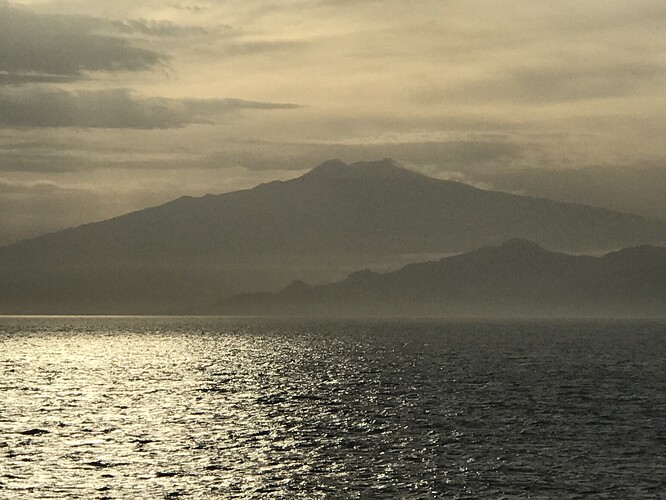 A route change to allow for a helicopter operation to disembark a poorly passenger yesterday saw us sail through the Messina Strait, which meant I got a great photo of I/SI-001.

Meanwhile, from on board, I’ve now reached 100 DXCCs worked with my FT-817 and Alexloop. Around 4000 QSOs made in the 18 weeks on board. One more week of the contract, then I’m home again. Expect a sudden increase in activity from G/SP-015 shortly…

It was great to work you from Gun (G/SP-013) the other day. I hope your weather is better than ours!

Hello Tom, great to hear you are nearly finished that job and started getting out again. Well done with the DXCC. What mode did you use?

Great report and photos too.

Expect a sudden increase in activity from G/SP-015 shortly…

I might be up your way more often too, my son’s just moved out from Manchester to Treacle Town

(Out for a walk on EA6 atm but no response to my 2m FM HT calls from just above (North) of Palma de Mallorca on higher ground).

That’s very impressive Tom. Are you going to give a final concert on air? If you do it in international waters you might be safe - Radio Tom! 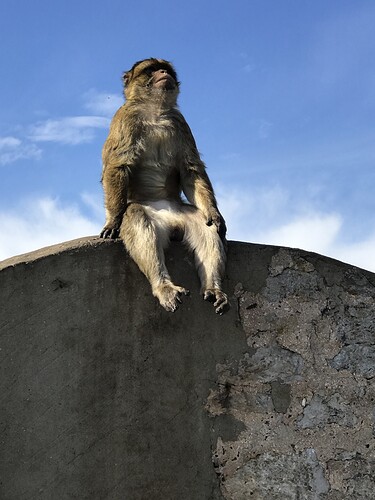 Walked to the summit all the way from the ship and had a look around the war tunnels on the way up. A 14 mile walk in total. 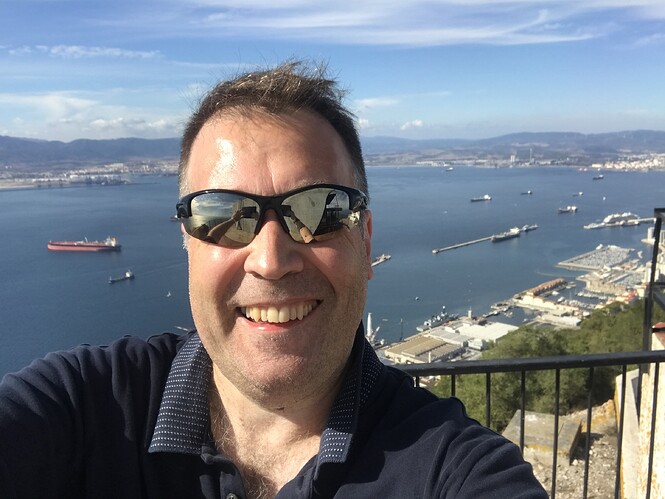 Encountered lots of Barbary macaques, and despite the warnings, they all seemed to be placid and well behaved! 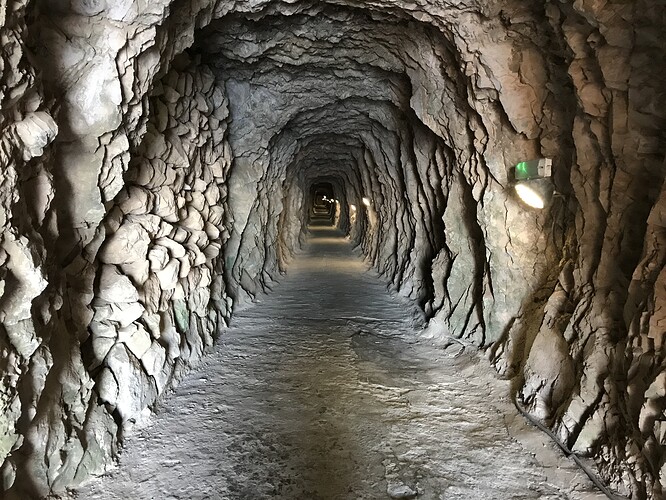 Two contacts made from the summit, both on the local 70cm repeater (which is housed up on the Rock too!) so as to ensure a warm welcome when I return home next week!

The /MM adventure concluded on Monday just gone, with 4265 QSOs and 103 DXCCs worked from on board the MV Spirit of Adventure. Wkg condx 5W from FT-817 + Alexloop or FT70D handheld (with rubber duck).

It took me longer than I, and indeed everyone predicted, but five days later I activated The Cloud G/SP-015.

Getting back into the more typical land-based routine of coupling gigs with SOTA activations!

Spent the week working down t’ pit! On just one of the seven show days, I managed to squeeze a SOTA activation in too. An unremarkable one at that, comprising just a couple of 2m FM QSOs. 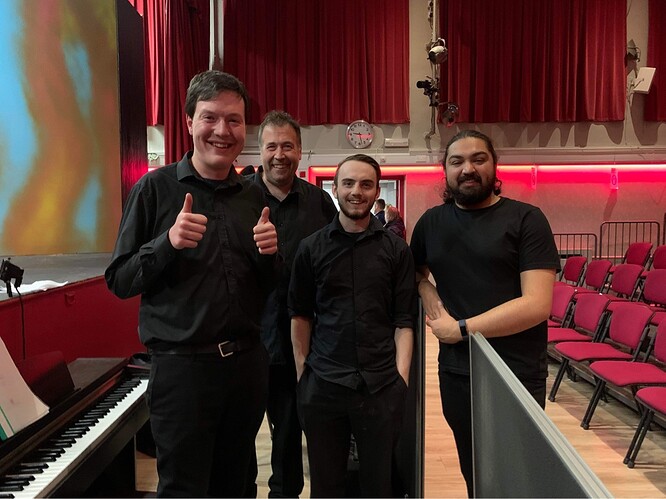 A tight schedule and less-than-pleasant weather influenced a handheld raid. Just three QSOs made on 2m FM before heading to the Moss Rose to watch, for the very first time, the newly formed Macclesfield FC, in North West Counties League action against Barnoldswick Town FC. 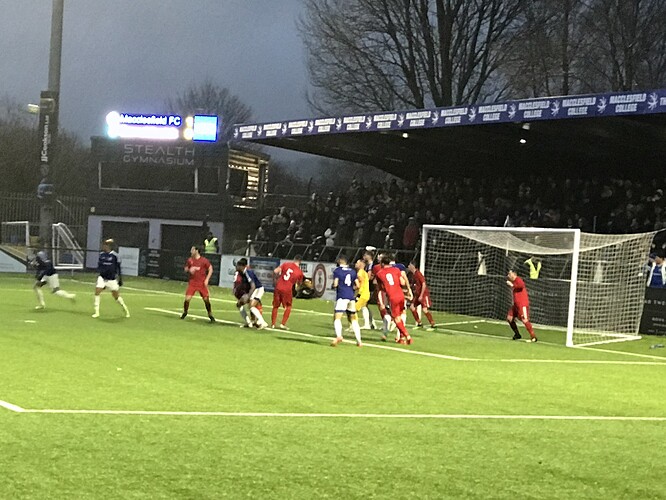 After the 2-0 victory, straight up to Preston for a gig with a great 8-piece soul and Motown band. 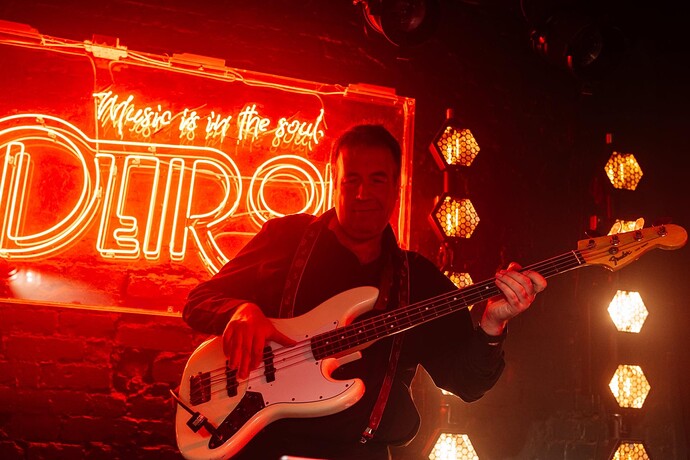 Back to this event after an enforced break last year. The lockdown that caused that break was also responsible for wiping out the winter bonus period at the start of 2021. 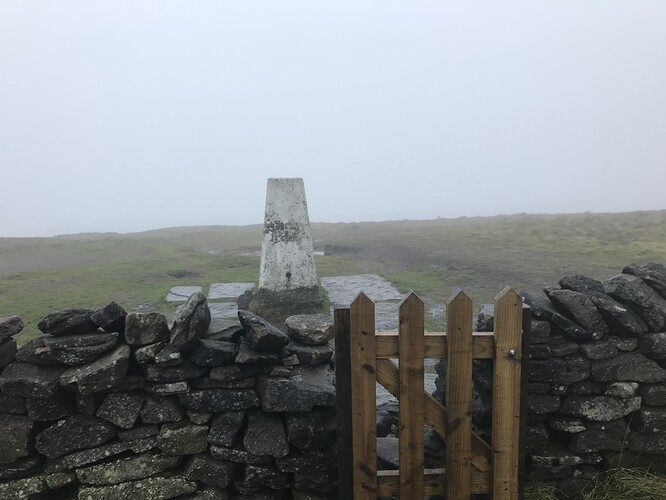 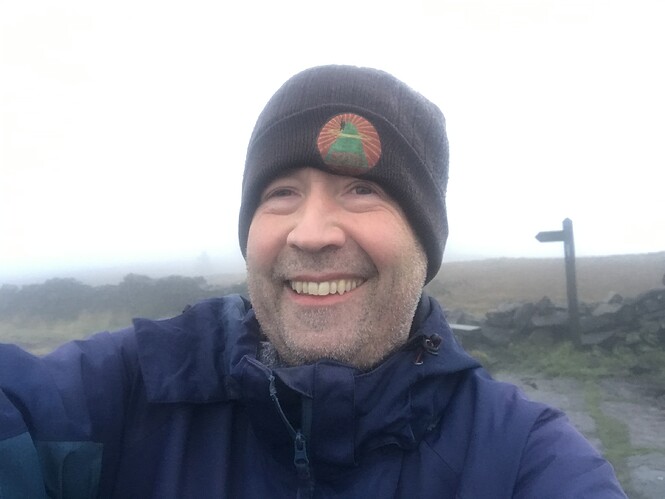 2m FM handheld raid again, and five QSOs made before the bulk of the drive over to Doncaster. 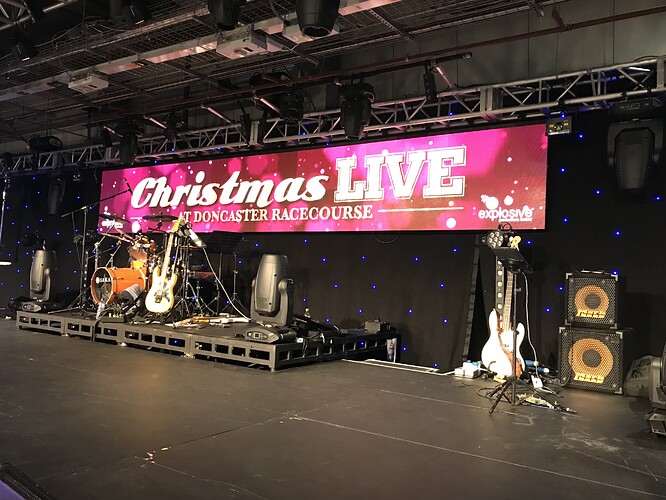 Rehearsals and soundchecks accounted for an eleven hour working day at the venue - a little excessive in my opinion - especially as I wanted a decent sleep before a SOTA outing the next day!

I was up around 0730 and went down to join the stable staff for a cooked breakfast in the lodge. It was a raceday at Doncaster but I wasn’t hanging around. 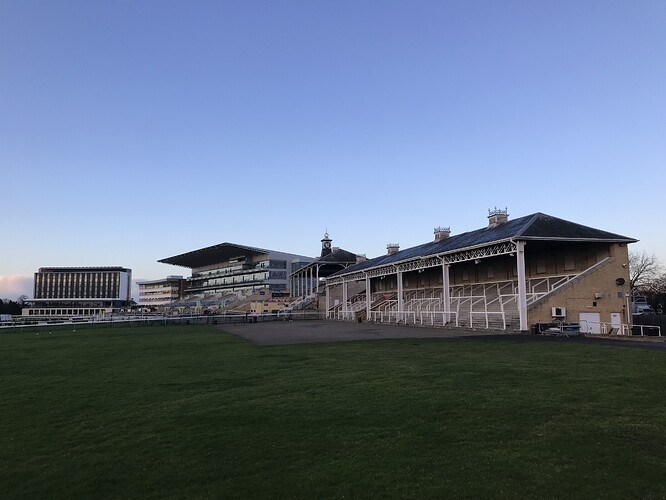 I set the satnav for the usual lay-by in Rylstone, and made the 90 minute drive north. 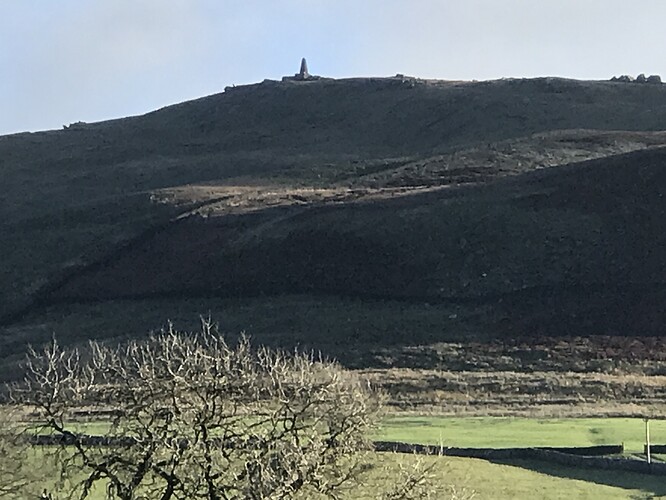 I’ve always done this circuit anti-clockwise previously, but at the last moment I decided to reverse that. I walked the Chapel Lane track from Rylstone to Cracoe village before turning right onto the Fell Lane track towards the hillside. 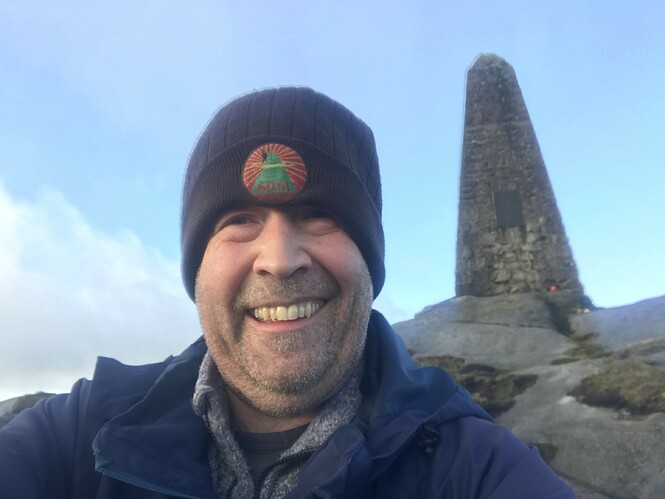 I started to pick up the pace as the ascent became steeper, conscious that Friday afternoon traffic back through Bradford might not be as optimistic as my satnav prediction. Little did I know what I was in for! 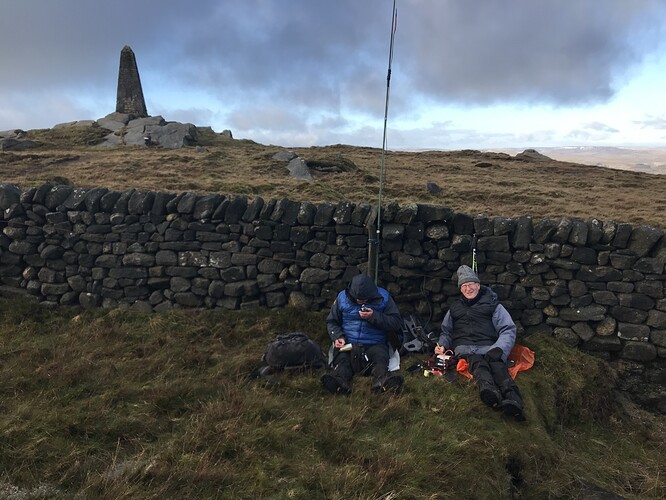 I managed to get my four contacts to qualify on 2m FM on the handheld, but I clearly wasn’t hearing everything. One of my callers suggested I might be suffering some local desense. I heard Nick G4OOE/P calling CQ SOTA so called back for the S2S - only to find he (and Dave G3TQQ/P) were also on Cracoe Fell - just a few yards from me! I hadn’t spotted the vertical poking up from behind the drystone wall! 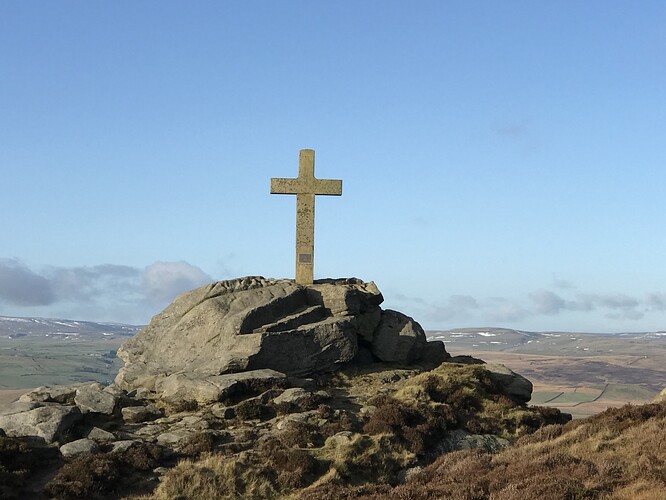 I completed the descent (working Dave and Nick for the chaser points as I did so?) and set off back to Doncaster with plenty of slack time in the bank ahead of the 5pm soundcheck. Or so I thought. Nobody had told me about the three hours it takes to drive a couple of miles down the A1 at Pontefract, where roadworks funnel four lanes down to one.

That was pretty stressful, and I eventually pulled into the racecourse at 1705. Fortunately, the bandleader was still outside smoking a fag and hadn’t summoned the start of the band’s soundcheck - so I made it by the skin of my teeth! 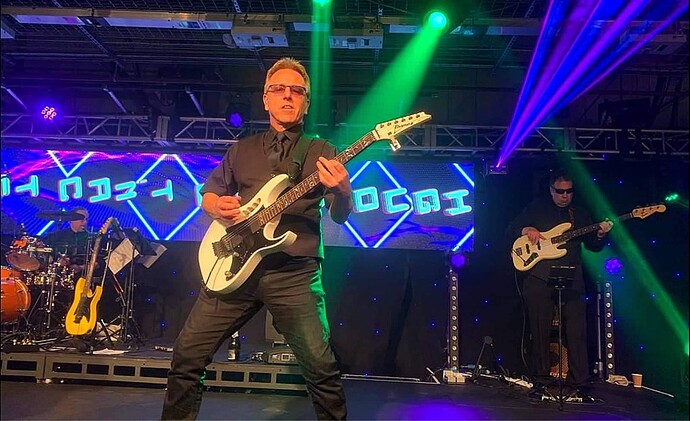 The first night of the show went well, but I only stayed for one drink at the after-party, preferring to get my head down in the hotel room. 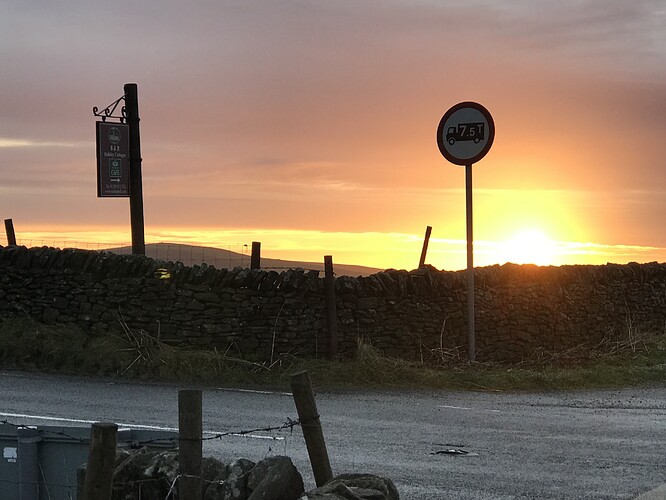 As woke up, I spotted on note on the dressing table. My roommate - lead guitarist Stu - had brought three bacon baps wrapped in tissue paper - from the late supper. That was my breakfast sorted. 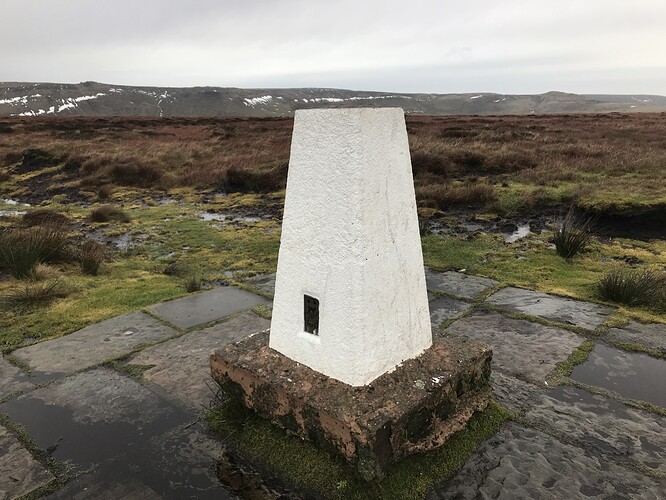 An early start had me arriving at the Rushup Edge parking spot at sunrise. I set off along the long flagged path to Brown Knoll (trig point pictured above). 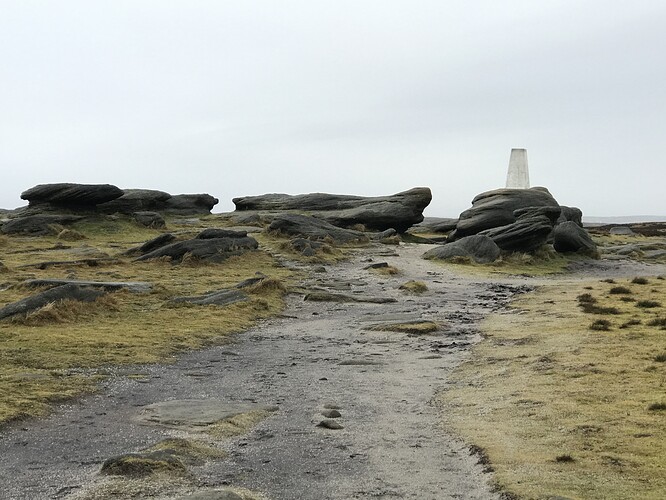 Then down to the Pennine Way and the final climb to Kinder Low. On that final ascent I heard Nic M7DNC/P calling CQ SOTA. I called just to say I’d be on summit in ten minutes and would call for the S2S then. As I continued monitoring, I found out that Nic was on Kinder - so called back in quickly to get the chaser points before entering the AZ! 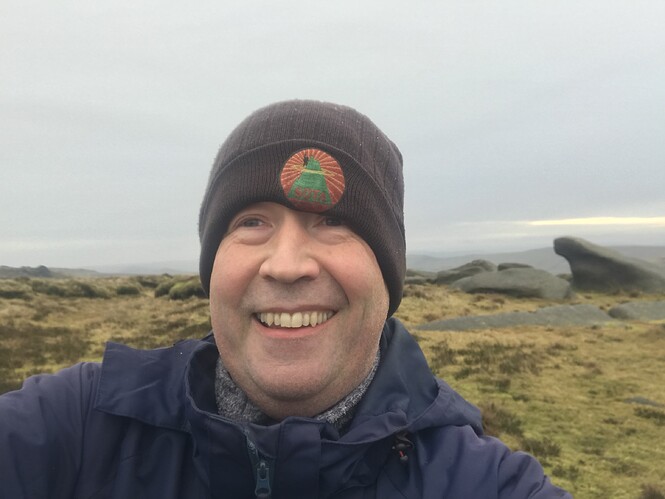 On summit I continued my current habit of 2m FM handheld operating, spotting Simon G7WKX and Nic M7NDC walking towards me as I did. S2S contacts made with M0MZB/P on Seatallan G/LD-025 and 2E0TZG/P on Shining Tor G/SP-004. 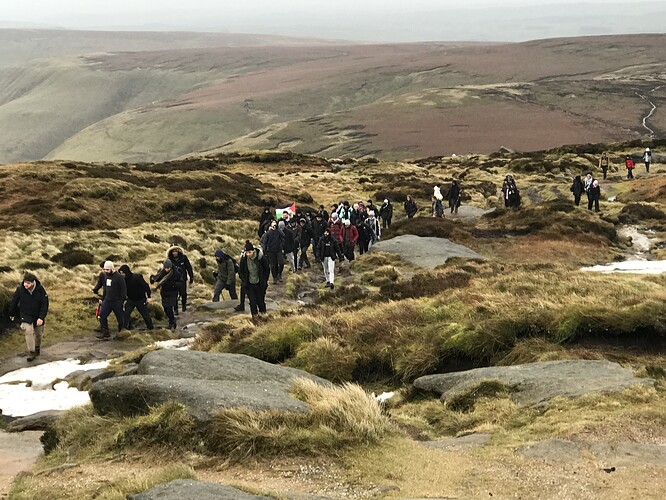 Simon worked me for the chaser points on his descent, and on my descent I got Ben GW4BML/P on Arenig Fawr GW/NW-011. I had company for the descent - a chap, curiously enough from Doncaster - doing the Edale skyline - and therefore heading down most of my descent route before turning left for Mam Tor. We passed a very large group of walkers carry the Palestinian flag as part of an antiracism event.

Thankfully, no traffic issues and I was back at the racecourse in Doncaster before 3pm, giving me ample time to relax in the lodge room while listening to Saturday football commentary before soundcheck.

Not really a gig day, but I set off from there that morning! The weather forecast was decent - but wrong! 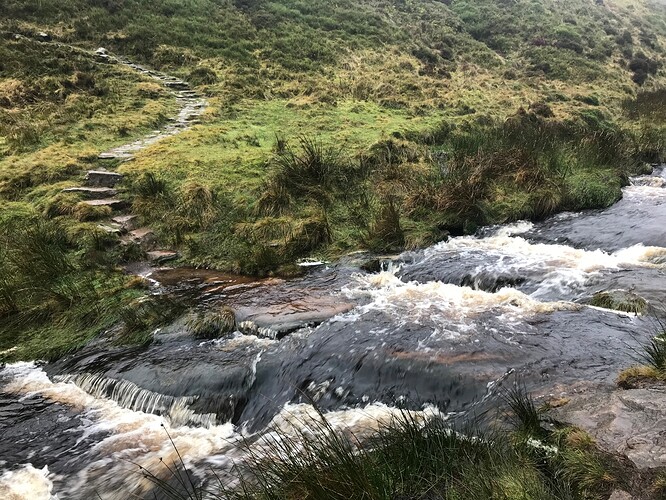 Dean Clough was rather lively when I got there and I couldn’t cross at the usual point. Fortunately a few metres upstream I could step over! 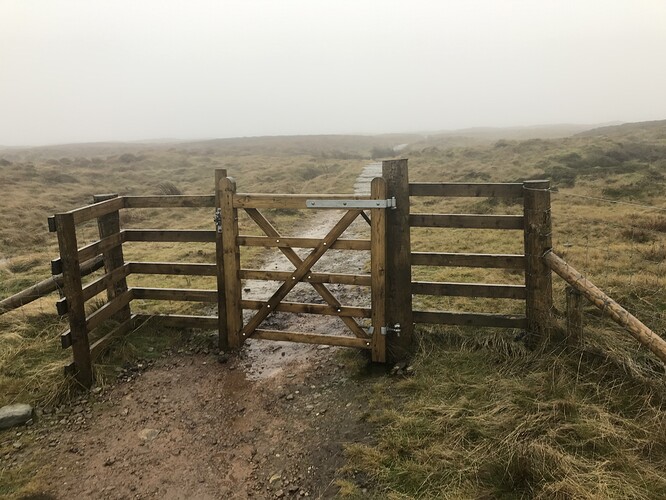 As I neared the summit I came across a fence and a gate that I didn’t recall - or was it there last year? 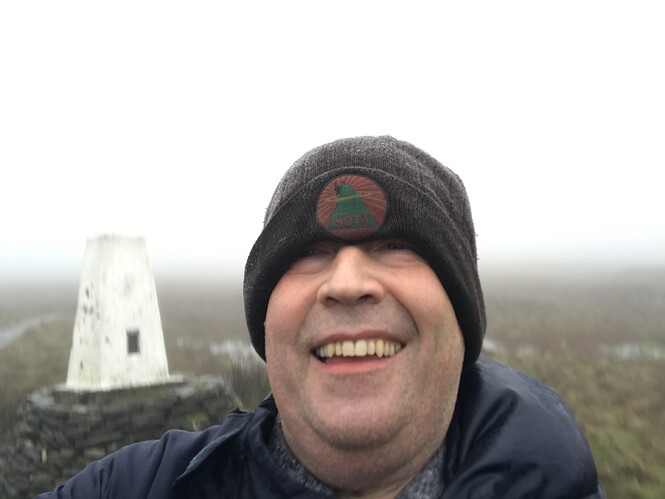 It was now raining quite hard so I just made four contacts on the handheld. Fortunately as I commenced the return walk, the rain stopped and the wind started drying me out quickly. 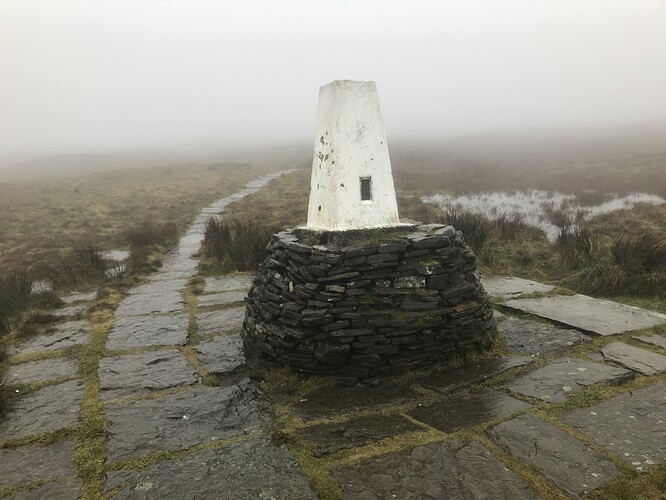 I made it back home to watch the remarkable conclusion to the F1 season. Next gigs next Friday and Saturday - with a resumption of maths teaching before then - but at a school without a convenient SOTA summit along the commute…

Good to read your report, I was pleased to get a S2S with you on 2m from G/LD-025. Was using an FT818nd and a flowerpot antenna.

I had intended to move on to HF, but conditions were rather unpleasant, with sleet and strong wind. And i had unintentionally errected my tarp right over the top of a big pike of sheep droppings.

Great to see your pictures, thanks for posting.

Brilliant report. When do you find time to sleep - or do you put that off until you get home?

FB Tom, We seem to meet up every few years on or near a summit!

Cheers to you and your family, merry xmas and a HNY

When do you find time to sleep … ? 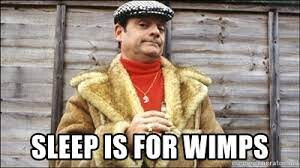 I have yet to watch the program about Macclesfield FC and Robbie Savage but there was one clip where Savage was giving them a pep-talk at half time. The audio had been bleeped so strong language was removed so the clip could be shown before the watershed. It was the most bleeped audio I have ever heard, over 75% was bleeped out. When you get to that level of nuclear swearing then the program is normally worth watching