I have just built a light weight delta loop for 6m using the design published by M0LTE. I tried it yesterday from my home QTH but the band was more or less closed but today things are better and using 100W and FT8 I’ve had several QSOs across Europe. The PSK Reporter map from earlier is shown below. Things have improved since and it is very good into Spain at the moment.

The only physical problem with the antenna is it has a 2m long plastic pipe across the top which is going to be a bit awkward on the ascent to a SOTA summit.

However, I think I can add some joints into it to make it more manageable.

But the main point of this Thread is how many SOTA chasers or activators can receive 6m, either digital, SSB or CW? I suspect digital will be the most productive as there are many non-SOTA operators on the band but it would be nice to try for a S2S. I tried sending out a CQ in CW this morning but the RBN system didn’t pick it up.

Of course, the big unknown is after carrying the antenna up to a summit is the 6m band going to be open? I doubt I would rely on 6m only for an activation. 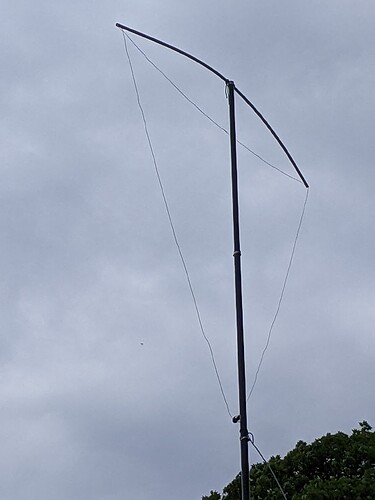 Hi John,
6m is the “Magic Band” and nobody can predict if will be open, but with this sun cycle grooving day after day and with the Es period started you will take a light antenna and “if” the magic start you’ll work a lot.

Go and try your antenna you’ll be surprised

PS: I worked nearly 200 DXCC countries without FT8, was in another time

I have a halfwave vertical (flowerpot sstyle) that I can deploy for 6m. light weight and no problem to put into the pack in case it’s useful. But my multiband doublet ZS6BKW style, does work on 6m with the ATU in the kx3.

(Like Eric, I also made many contacts on 6m in an earlier time. 30 years ago in V85 land, I worked many JA stations on 6m and qualified for JCC200, ie 200 unique cities confirmed by QSL. But I was a lot younger then…

I try to use 6mFM (my VX-7 HT supports it) from time to time, but without much success. Even so, I’ve managed to become the #1 6m SOTA Op in my state with a whopping 4 summits where I’ve successfully used 6m.

I currently use a homebrew EFHW hung vertically in a tree.

My buddy, with his FT-818, uses 6m SSB from time to time, but doesn’t have any more success than I have experienced. What I picked up during a VHF contest last year is most 6m ops have gone to FT8. During that contest I made no 6mFM contacts and my buddy only made a few on SSB.

is it has a 2m long plastic pipe across the top

If you build the version with the apex at the top not the bottom then you only need guys to hold the bottom section out horizontally.

Thank you for all the replies. It looks as if a 6m activation is worth trying - but with other bands available as a backup.

I like the idea of using the Delta with the apex uppermost. What I’ve built works in my narrow garden and means I can quickly turn it but on a windy summit one supported by guys would be best.

Hi John, It was a good while back but I tried 6m up on GW/NW-012 Cadair Berwyn, in May 2009!
Using an FT897 and literally a “Half Wave” wire dipole resting on top of the Cairn Wall.
During the last contact, I could actually hear the door being closed on “the magic band” It was great fun back in those days.
Below are the results from my log extracted from the database:

Good luck, hope the Conditions are perfect the first time you experiment, Tony

6m SSB has been working today, I heard several QSOs going on. Of course I’m using 100W but 10W from a good summit should also work well if the band is open.

Of course, the big unknown is after carrying the antenna up to a summit is the 6m band going to be open?

Last night 6m was open to the Caribbean, Canada and East side USA. It was a big opening. I went to bed at 2245z due to tiredness and 6m was still well open for DX then. I ignored around 8 Caribbean countries I had worked before and just went after ZF1EJ for a new one -18 sent -17 received when worked at 2212z and stronger still when I turned the radio off at 2245z. It was a big opening. I only realised the band was well open at around 2145z but read on the CDXC reflector later that was band had been open to Canada much earlier in the evening. Not sure what will happen tonight, but the likely activity is probably too late for SOTA stations trying their hand on 6m, and unfortunately all the action was on FT8 at power levels of 100 watts or more and beams. I tuned over the CW section twice and there wasn’t a single station audible. So I scuttled back to 50313 for the FT8 action.

It seems only to be open within Europe at the moment. I am reaching a lot of stations about 1500km away in southern and eastern Europe and the odd one, I assume a double skip including one QSO to eastern Turkey at around 3750km. But nothing across the Atlantic received or sent so far.

There is a little bit of traffic on CW going on.

The first rig I had that covered 6m was an FT817, so I put up a GW0GHF wire antenna and tried the band out. My best day got me nine countries, by the end of the first season I had worked 34 entities, all on SSB, but the pick of the SSB bunch was on 27th July 2004 when I worked F6HRP, genuinely by aurora! Six is a great band for QRP when its open, but I am told that when the SFI exceeds 200 then world-wide DX becomes available by F2, so I check for that every day now. So far it hasn’t exceeded 160, but when it does - if it does - then an activation might get quite exciting!

Another antenna worth considering for 6 metre portable operation is the Moxon. There is a commercial version from Par electronics in the US or build your own. http://tippete.net/cgi-bin/moxgen.pl

I agree, the Moxon is a very good antenna. There used to be a portable version on sale in the UK but it has been discontinued.

I did look at making one but I thought the delta loop would be easier!

Does anyone know of a 6m Helical whip with a BNC on it , dedicated to 6m instead of the 3 band Rubber duck on the FT818? or if not has anyone used the 818 antenna with any noticeable success portable on 50MHz??

I’ve managed 1 or 2 FT8 contacts using the rubber duck but I’ve had more success using a flowerpot dipole on a taller pole.
I need to make myself a small, portable directional antenna for 6m.

I’m not sure if this would be suitable. I haven’t checked the connector but you could get an adaptor.

This a quick and dirty way to build a well tested and very small pack 6m antenna. Sorry, only in german: 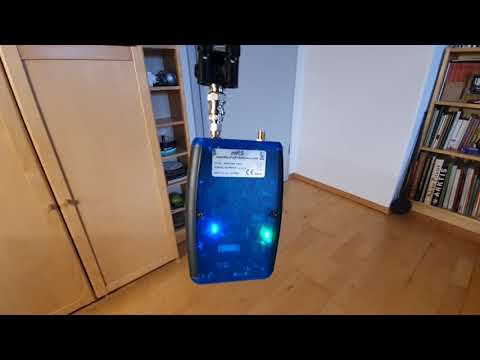 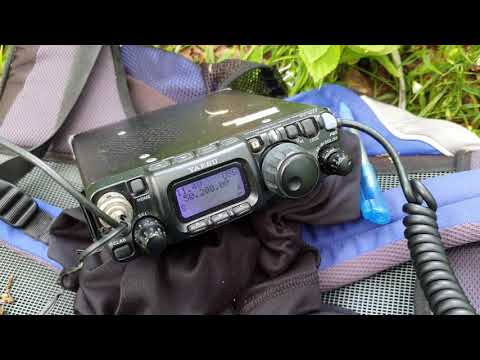 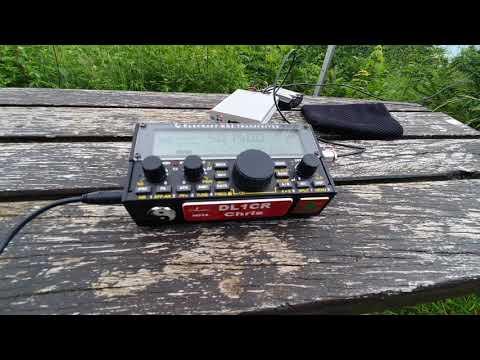