As the weather is improving, I was thinking it would be a nice idea to have a SOTA microwave activity period. Either an evening, a day or a full weekend. Personally just 1 day, either a Saturday or Sunday would suit me.

A chance to put those SG-Labs transverters (others are available) to some nice SOTA activities, perhaps even qualify a summit with microwave S2S only?

Sunday June 3rd is the microwave low band contest date, perhaps this would be suitable, unless you had already planned to be taking part from a non-SOTA location.

Any suggestions of dates / times welcome.

I like the idea in general, and June 3rd looks good to me.

Just one S2S for me during the last Tuesday evening UKAC, with Andrew G4VFL/P.

For a daytime activation, I might be tempted to travel further and climb a bit higher!

Good suggestion. The idea of doing it during a contest is a good one I would have thought. It does guarantee a few takers with good systems will be about. Unfortunately I have no gear for microwave bands that low in frequency.

There is a contest on the 1st weekend in May. https://www.rsgbcc.org/cgi-bin/contest_rules.pl?year=2018&contest=mayuhf If the weather is good l may go on a summit for Saturday afternoon. (Contest is still on but my pass out has been cancelled !)

As usual when trying to organise something, there are no dates to suit everyone.
Unfortunately I will be on a 4 day walking holiday in Brecon that weekend.
radio activity will be limited to a couple of evening on summits, probably VHF only.
I’ll try and do a few of the UKAC’s from summits through the summer, nut not many that are close enough for an evening activation.

good luck with your weekend.

I’m planning to take my SG Labs 23-cm transverter up The Cloud G/SP-015 for this Sunday’s low-band contest. I’m expecting to do just the first couple of hours. I’ve only got the supplied antenna so far, so very far from competitive. Looking for summit-to-summit!

I’m planning to be on a summit with 23cm for the first hour or two eg from around 10:00z. I’ll alert when I have decided which summit…

WX looking good in GW/NW, though MWIS is suggesting a small risk of thunder in the afternoon. Any sign of that, and I’ll be heading down!

Point towards IO87 and I will look for a suitable plane

Well, that was fun, if not as busy as I thought it might be!

I activated Cadair Berwyn GW/NW-012 on 23cm, using the SGLabs transverter and FT817, running about 2W to a 15 ele yagi. Arriving a few minutes after the start of the Microwave Group low band contest, I fully expected the band to be buzzing as it is on the tuesday evening UKAC events. But had it not been for the reassuring radar “ziz”, I would have questioned my equipment.

However at 10:35 a spot and a quick CQ brought in a welcome call from Simon G4TJC/P on The Cloud G/SP-015, and 59 reports were exchanged.

No more signals heard, so at 10:50 I tipped the yagi vertical, and put out a call on FM. Straight back came John G3XEV from IO82WM running 1 watt to a vertical colinear, and true 59 reports were exchanged (92Km).

Nothing else on FM, so back to SSB. Now 11:00, I found Peter G3SMT and Roger G3OHH in IO82WM and IO83VC respectively. They both commented that the southern stations tend only to beam north towards the end of contests, something to remember for next time, perhaps!

See what happens when these southerners beam north! I wonder if this might have been a fortuitous aircraft bounce, as I heard nothing else from that direction.

Over an hour later, at 12:35, I’m listening to Simon calling CQ as I start to pack up. He takes a call from Laurie G0MRL in IO83RO, and I jump in after the 73s, inviting Laurie 10KHz up. It turns out that he is only recently back on 23cm, using a triband vertical. He seems chuffed to have worked us both, as I’m sure we both were to work him.

I think 23 is a good band for SOTA, low power and small antennas can be very successful, and even relatively high gain antennas are quite small. So, come on, where are all those SGLabs transverters, and 23cm capable handhelds - and when should we have the next activity period?

A few photos, the general arrangement: 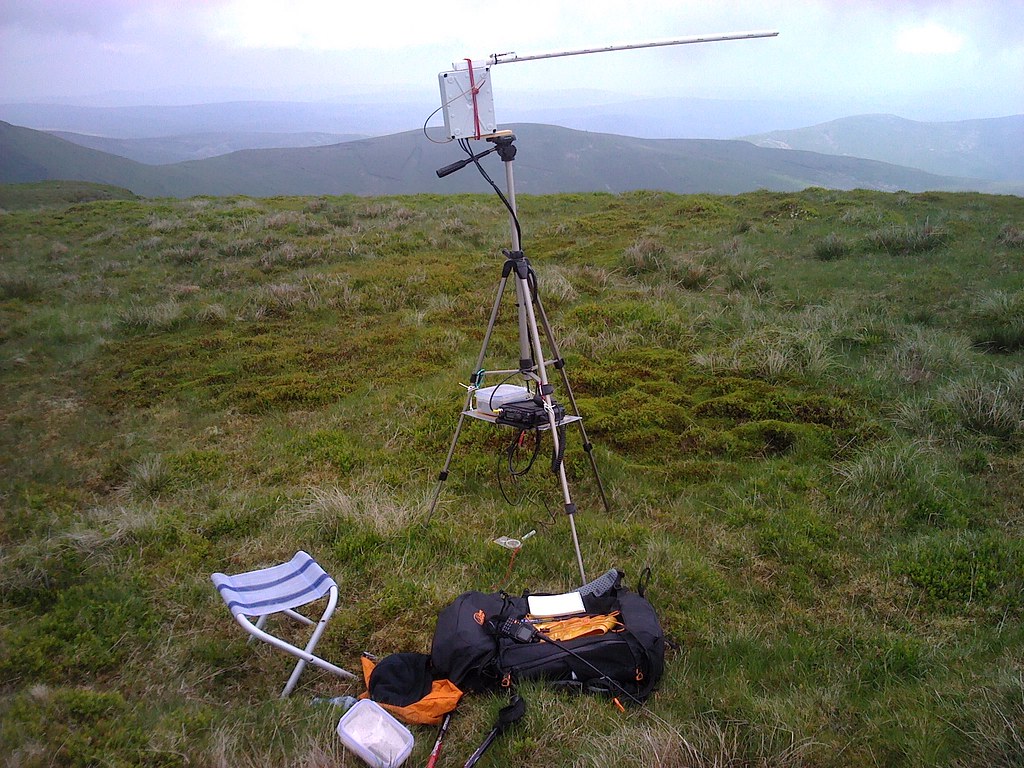 Looking up from the operating position:
It may look a bit precarious, but it is fairly well balanced in both weight and wind resistance. The cables stay connected to the transverter, and coil up inside the box for transit, making for a fairly quick setup / takedown. 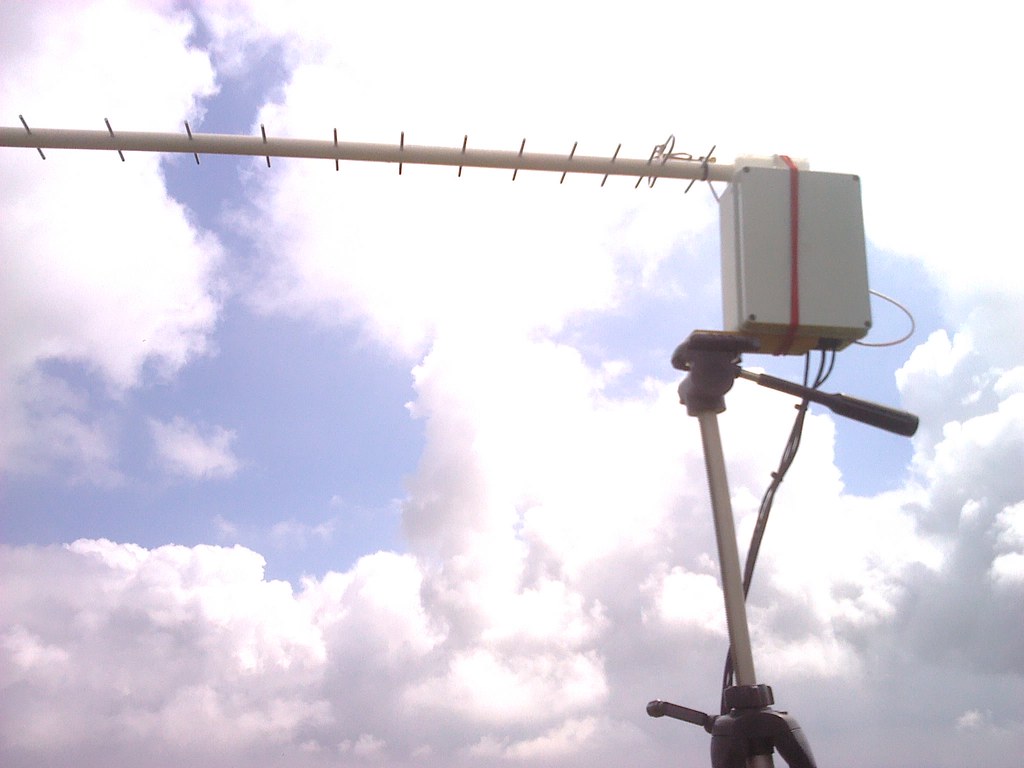 Operating position - a plywood shelf suspended on cords. Thin ply is great for this, plenty stiff enough, but also sufficiently flexible to fit the contoured back of my rucksack. Gaffer tape trim to avoid splinters: 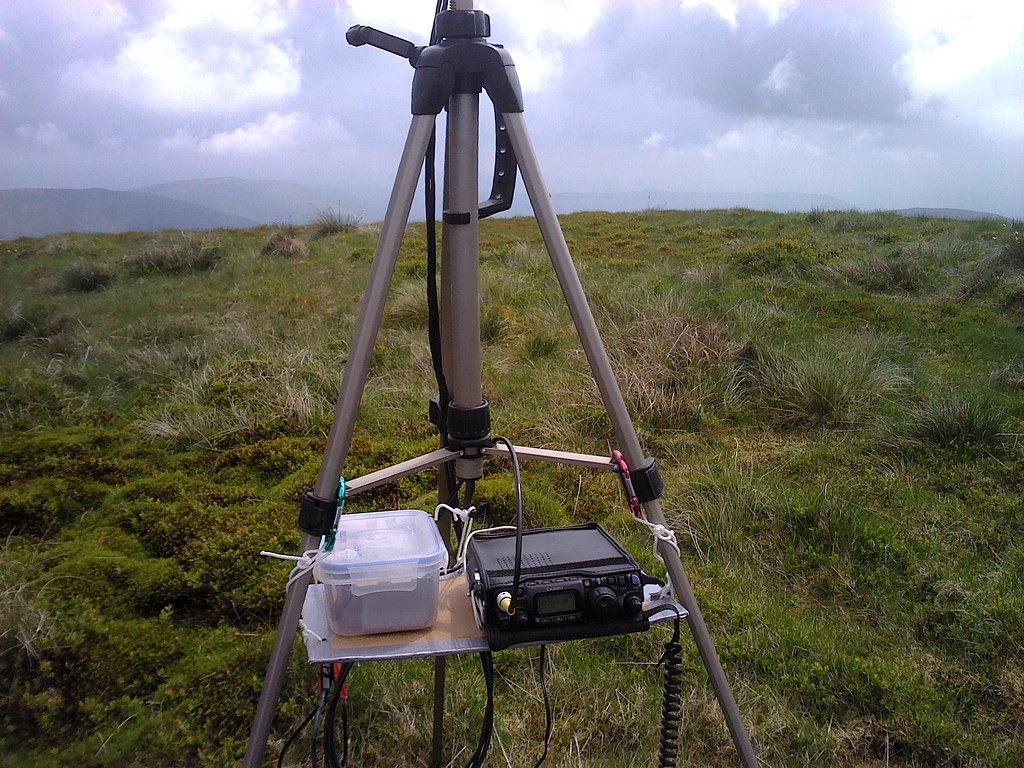 Point towards IO87 and I will look for a suitable plane

I did spend a fair bit of time pointing north, tuning around and calling on CW as well as SSB, but nothing heard at all.

I arrived on the summit of G/SP-015 at about the contest start time and set up as quickly as I could.

So into full debug mode. LEDs showing correct state. Noise increases with the antenna connected. IF cable swap - well, why not. Still nothing.

Then the phone squawked for Adrian’s spot and soon I had him. Yeah!

I didn’t have to wait very long before I logged Peter, G3SMT, and then Roger, G3OHH. Roger is on Mow Cop - a decent pair of binoculars would answer for communication. So, still one more required.

I called and called. A swap to vertical and FM was fruitless. Back to horizontal SSB. Still nothing, despite swinging around the compass, numerous SOTA spots and even ON4KST. Eventually, after about 2 hours’ operation, on my second swap up to 1297.500 MHz Laurie, G0MRL, saved the day and I had finally qualified The Cloud!

Laurie followed up with a QSO on SSB, but there were to be no more log entries for 23cm for me.

After banking a few on 2m, including summit-to-summit with Mike, M0XMX/P on Gun, I packed away to save getting any more sun burn!

You’ll see from my picture that the station is a lot less sophisticated than Adrian’s. I’m still dreaming of the perfect antenna to build and in the mean time I have only the supplied 2-ele. Well, it saves having to turn it much! 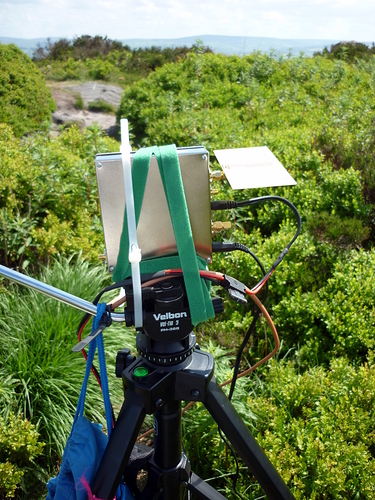 After starting this thread, I ended up with more important family commitments, so could only manage the last 90 mins of the contest. I seemed to have missed all of the fun.
No S2S, and best DX of 140Km on 23. Nothing on 13.
Although I did find out that G/CE-004 is no good north on 13 cm due to the interference from the masts atop. Perhaps north would be better from the bench instead of the trig point.

Well done to those who did get out and make some contacts.
See you all next year, or maybe the next UKAC?

On the Microwave front, as well as the SOTA_Reflector keep and eye on our GM13 forum for activities ‘up-north’.

I was late on and had the same difficulty getting Southern softies to point North. Spent ages chatting with G8DMU in IO93, we seemed to have half the aircraft fleet of the western world passing across our path - gave up when the xyl had better ideas for my time

I’ve missed a couple of months for various reasons, but I’m heading to Stiperstones G/WB-003 for this evening’s 23cm UKAC. Looking forward to any and all contacts, S2S especially welcome

A nice evening for an activation of G/SP-013 Gun. 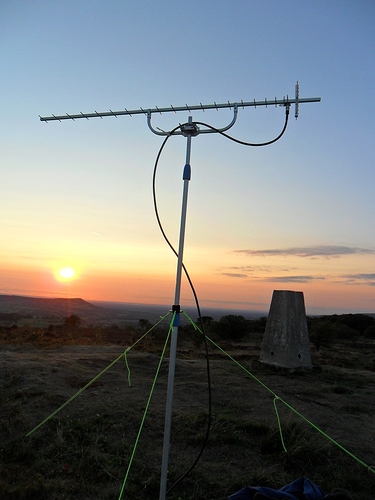 Sorry Adrian, you caught me by surprise as I wasn’t expecting to get an S2S. 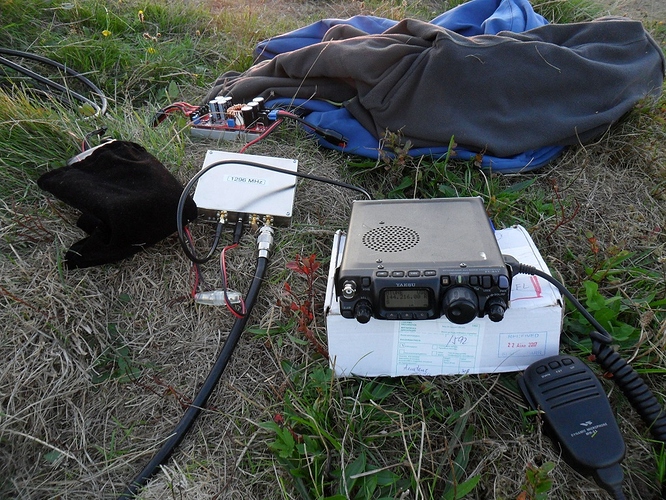 A very pleasant evening on Stiperstones - no photos though. My impression is that it is marginally better than Longmynd RF wise, but not so nice to walk off in the dark, as it is rough rocky ground.

Good to work you for an S2S, Stuart, and also Rod M0JLA /P on Hegdon Hill.

What is the “switched mode” looking device in your photo, Stuart? I have been daydreaming about an up converter to power a 28V LDMOS PA, though I don’t have either at present!

Edit: Just uploaded log to UKAC, best DX GM4JTJ near Dundee 450Km. My best ever DX on 23Cm, and first GM. Some QSB, but always readable. I wonder if this was aircraft bounce, or just good conditions? Do aircraft reflections have a characteristic quality? I’m familiar with flutter on the VHF bands, but that is caused by multi path phase changing…

Barry @GM4TOE a qso is getting closer