If anyone is interested I have been doing some playing around with the SOTA logo. I felt that the existing SOTA logos were somewhat small and not suitable for use on large displays, flags or tee-shirts so I thought I would make my own following the existing pattern but adding my own tweaks. The logos have been redrawn from scratch by me (GW7AAV) and some designed for specific associations. Please feel free to use this artwork in line with Summits On The Air rules, that is it is free for none profit use. They should be good from 50x50 to 1000 x 1000 at 72 DPI without starting to pixelate.

Thanks to Bobby GM7GAX for restarting me on this and the idea for the blue Scottish Association logo idea.

The logos are here… 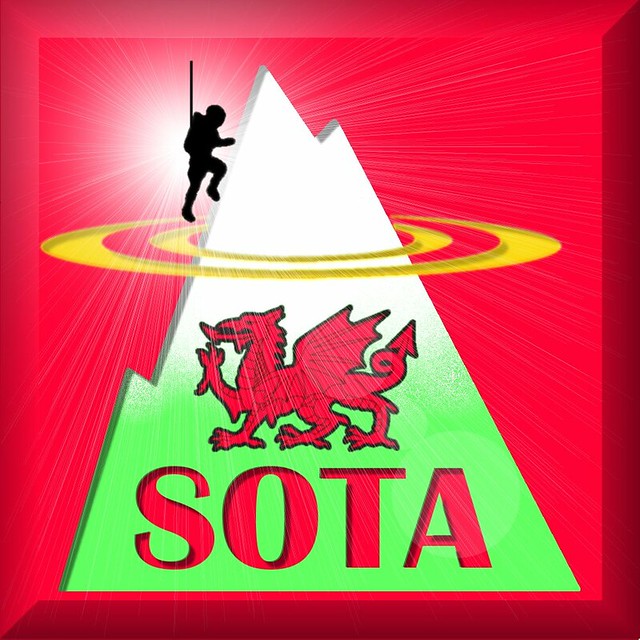 What about a George Cross one, or is that crossing the line

I just added Norway and Germany.

I was still thinking of what to do for England, but I know what I will do. Say tuned in.

The logos are looking great, Steve!

What`s with the red rose?

What’s with the White Rose?

It’s was the Queen of Hearts she’s painting them red!

Oh and I didn’t want to restart that conflict, it’s enough trouble keeping those larger sipping southerners south of the Watford gap ;0)

Only jesting Steve, I think it is/was the Red & White Tudor rose that is/was used as the emblem for England anyway. Although saying that, a quick Google search has really confused me??

Oh and I didn’t want to restart that conflict, it’s enough trouble
keeping those larger sipping southerners south of the Watford gap ;0)

Oi, I resemble that remark - location, not the beer! Can’t help that I got my priorities wrong in 1978 and moved south from my home base of Nottinghamshire. Maybe I should develop one with a coal mine as part of the logo to make myself feel really at home

Never mind about pandering to nationalism, Steve, how about one with a beer pump on for people who know where their real priorities lie!

OK, they look great! For W6, and given our Governator’s fame as an action hero, can you do anything for us?

In reply to G4OIG:
Hi Gerard,
I was thinking of starting an award for Coal Mines on The Air. Similar criteria as SOTA, but using depth instead of altitude, and limited to 1296MHz and above. Sounds like you may be interested?
Great work Steve.,
73, Frank

Don’t give them ideas Frank. Rather than CMOTA you’ll stimulate someone to do COTA [Caves on the air] using magnetic links!

In reply to GW7AAV:
Great work Steve - but what happened to our Lion Rampant, or you could have our Thistle - just make sure that dragon doesn’t eat it - liable to get heart burn (;>

Careful, Jack, you might get your wish - he’s drawn the dragon licking an ice cream, heaven knows what he would do with a rampant lion!

CAN I HAVE A NEW LOGO INVERTED MOUNTAIN PLEASE as

I live in (well very near a cave ) do I qualify

GRAHAM
ps anyone know where I can get a magnetic loop ???

Don’t give them ideas Frank. Rather than CMOTA you’ll stimulate
someone to do COTA [Caves on the air] using magnetic links!

I’ve given up my initial thoughts on coal mines Andy as they are man made structures and therefore do not qualify. However, you could have something in COTA and taking it forward CAPOTA is more logical (Caves and Potholes), perhaps initially spawned in the North Yorkshire area using VLF. It could give a whole new meaning to P2P - Pothole to Pothole.

What I want to see is Steve’s rendition of a logo for Australian SOTA - yes it would probably have a Roo on it, but would the whole logo be inverted?

What I want to see is Steve’s rendition of a logo for Australian SOTA - yes it would probably have a Roo on it, but would the whole logo be inverted?

Macedonia and W3 USA about to be added as requested.