I almost feel a little embarrassed posting this activation report!

On Sunday I had decided to try and work some DX from the excellent Whitbarrow Scar G/LD-056. I’d not tried HF in anger from this location, but figured I would have a couple of advantages over my go-to summit of Gummer’s How:

Whitbarrow Scar is a very special summit for adventure radio types in that it is not only a SOTA summit but also it’s own Park on the Air location G-0190, a WWFF location GFF-0233 and a Wainwright on the Air LDO-109. I figured an extended stay here from mid afternoon would give me a good chance of some long distance contacts, and I had been planning on doing a joint activation here with SOTA/POTA. 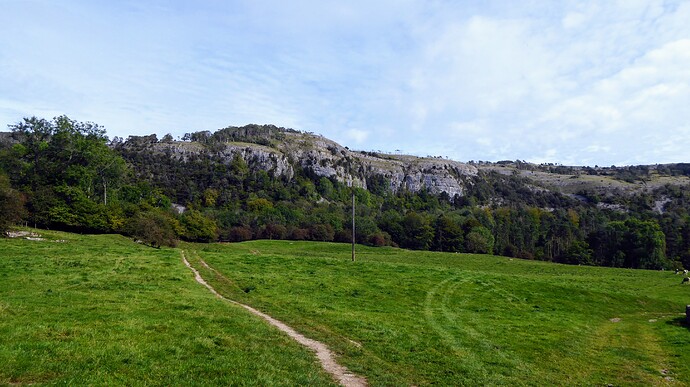 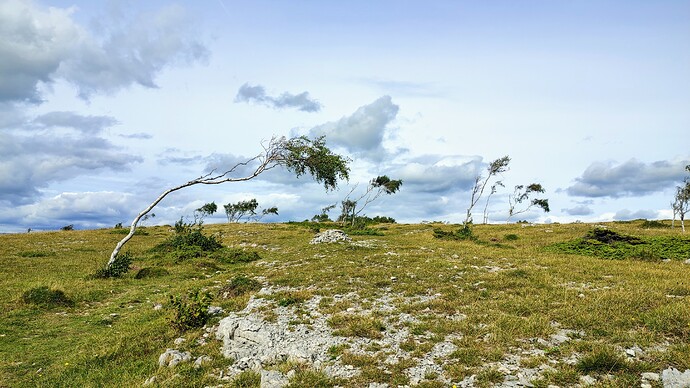 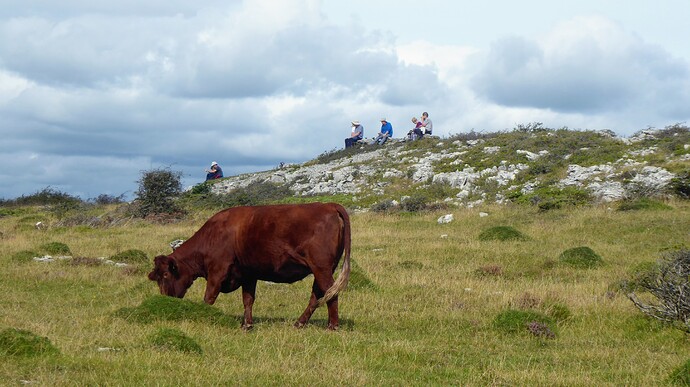 During the course of the afternoon I managed to crack a section of the mast (cue massive electrical tape patch up), snap the antenna in two places (fortunately I was only doing 20m at that point) and knacker a battery (don’t try and charge your phone from a spent battery). It was all worth it…

At just before 2pm I turned on the handheld attached to the Slim-J and could hear local activator traffic and was grateful to get Dave and Nick. I could hear Phil on GM/SS-170 - pretty good given my southerly Lake District location but he was 52 at best and sometimes faded into the noise. Not wanting to risk missing the contact I hurried to get the FT-857 connected up so I could hit him with 50w. As Phil couldn’t hear me on 5w this turned out to be a good plan.

Just before they were packing up I snagged Andy, Shane & Dave on their respective summits. Last in the log for the VHF activation was Andy @G8CPZ on Gummer’s How. I thought there might be half a chance to get a photo of him on the summit as it is visible from Whitbarrow Scar. 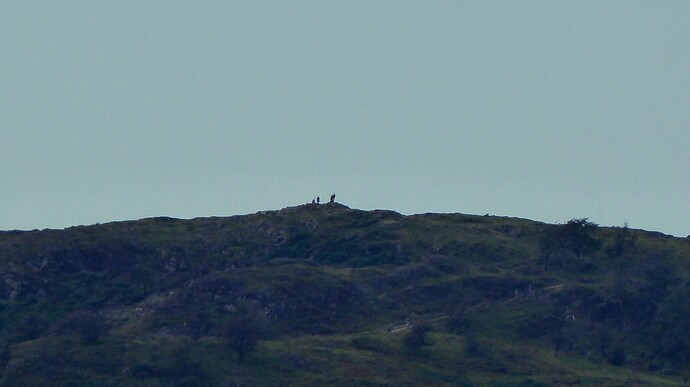 On HF I did a little SOTA chasing to start with and it was great to get a S2S with Guru @EA2IF on EA2/NV-108 and Leszek @SQ9MDF & Violetta on OM/PO-013. Once I started working a frequency on 20m I spotted myself on SOTA, WWFF and POTA sites. Biggest surprise was the call from @VK5PAS Paul - OMG! I was stunned, although I did manage a thank you! Then John popped in KI6EAB/W who explained to me that he was in California but using a Florida based station remotely.

Other notable contacts: a nice chat with Geir LA5ZO/MM who was moored up at Cascais in Portugal - he gave me a pretty accurate position report from his onboard GPS but I was able to find his exact location later based on a Marine website. 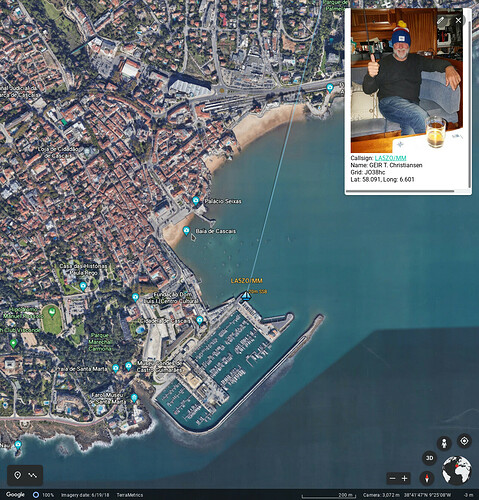 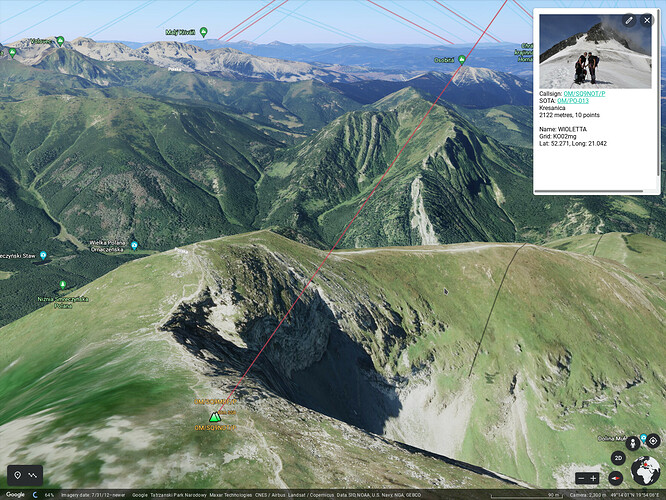 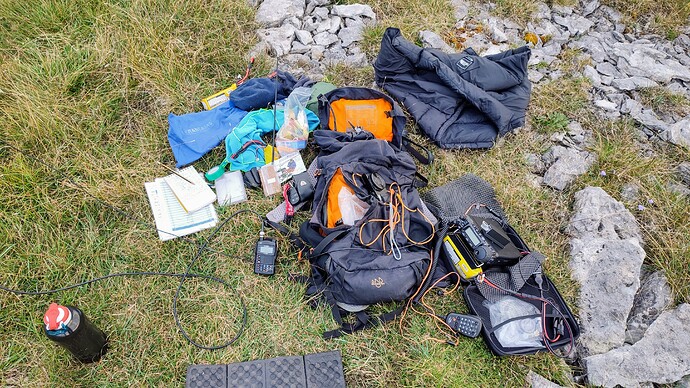 A few more SOTA S2S were a pleasure to work - Andrij & Andre on UT/CA-232 seem genuinely pleased to get me in their log. Stavros was his usual enthusiastic self on SV/ST-008 followed by Guille on EA1/SG-003 then a nice run of EU chasers.

Not sure what started the transatlantic ball rolling, but roll it did from around half three and continued on and off until half nine when I finally packed up. Certainly a large number of the US chasers were attracted by the POTA in my SOTA/POTA but on several occasions I was asked for my SOTA reference. 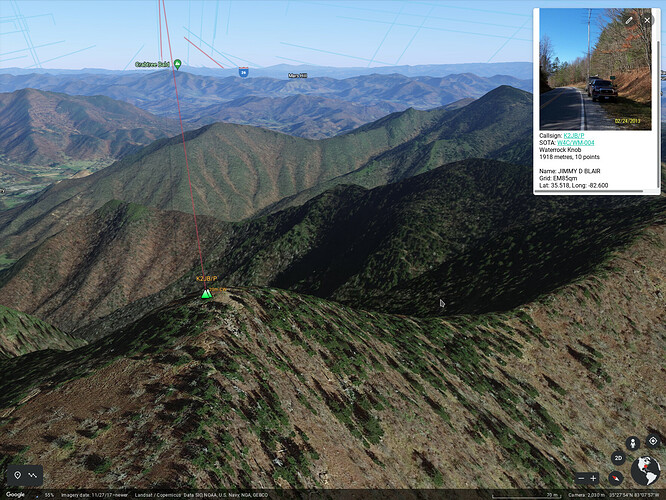 I broke off this run to work @M0JLA Rod on GM/SS-205 on 60m then decided to slot in a more local SOTA activation by working 60m and 80m. When I re-clipped for 20m I somehow managed to make my dodgy straight key sending stick with @K2JB Jimmy on W4C/WM-004, my first of three transatlantic SOTA S2S contacts. It was great, and sometimes extremely hard work, to get some Park activators in the States in the log, several of the chasers and activators said it had been their first POTA contact outside the USA. Last in this run was @VE2DDZ Malcolm - our second S2S apparently in the last three years, it was an easy QSO thanks Malcolm! 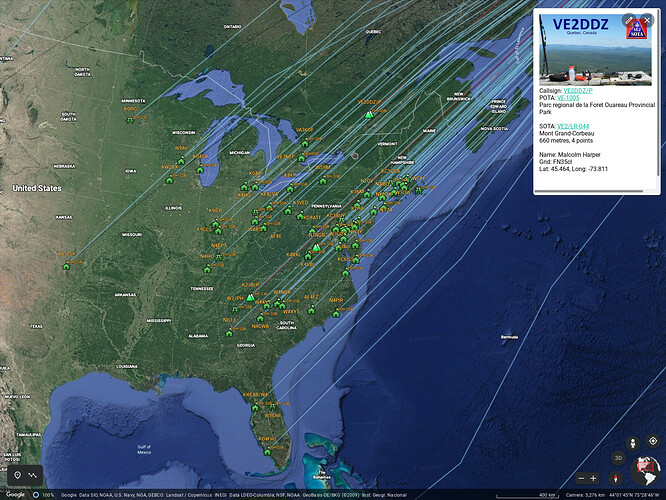 Hearing an M6 call CQ I dropped backed to 2m to work him and then had a lovely net-style conversation with Nigel, Andy and Dave. Dave - ask four operators what your audio sounds like, expect four different answers! Really nice to have a chat.

And so to the final run of contacts. It was only really late in this list, as I’d been working a frequency and ignoring the contest stations, that it finally clicked that I was ‘desirable’ in the Worked all Europe contest, but not before a long string of State-side contacts including another S2S with N7NGY on W4V/SH-004.

What is really interesting however is that DX4EVM in the Philippines somehow found me on the frequency I was working! As you can see from the frequency, towards the end I decided to scan the band and pickup a few more interesting DX contacts before my cut-off time of ‘around 9pm’.

My best result to date for a single summit - 145 QSOs. 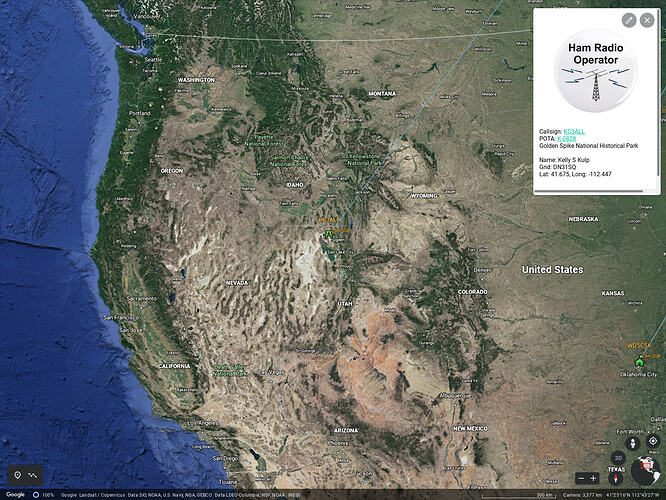 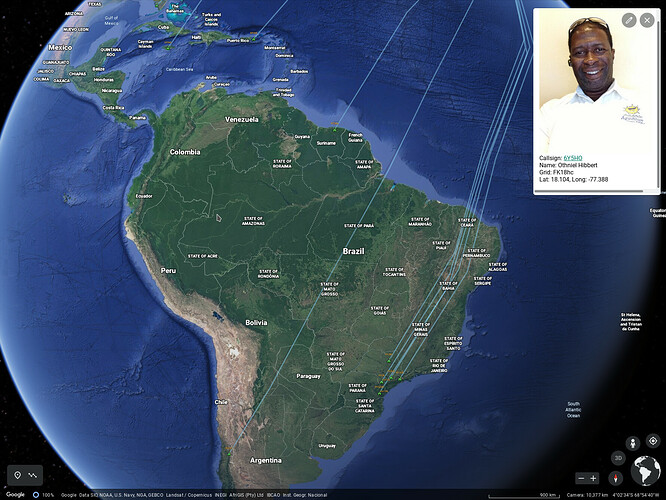 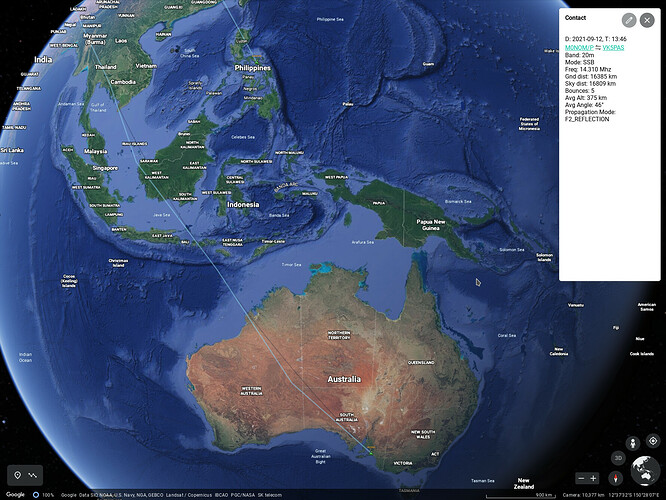 Forgetting the radio, this is a wonderful place to spend a few hours. The sunset didn’t disappoint.
Cheers, Mark. 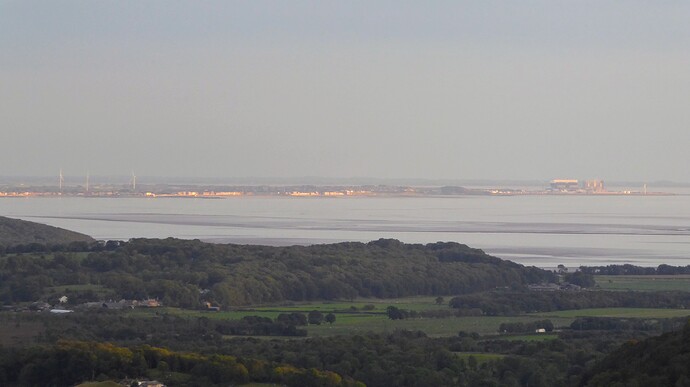 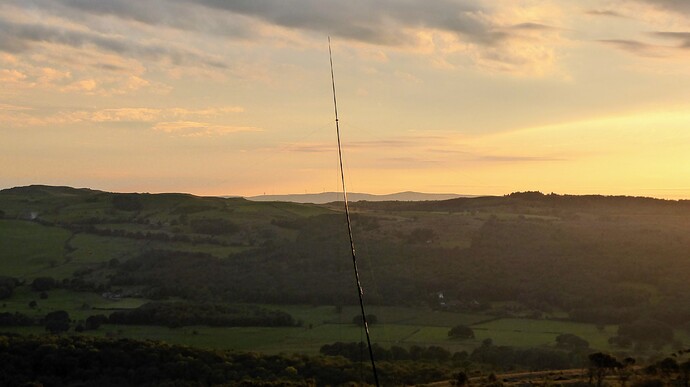 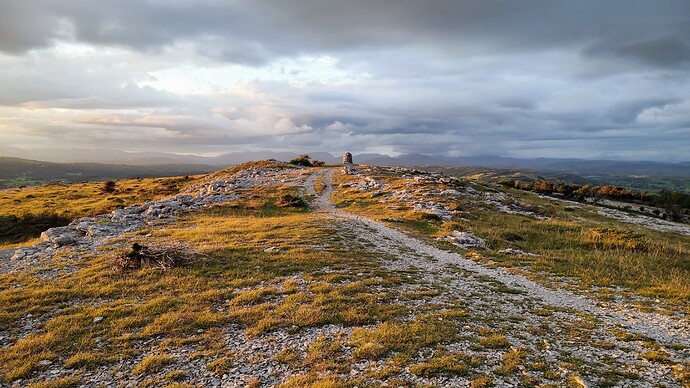 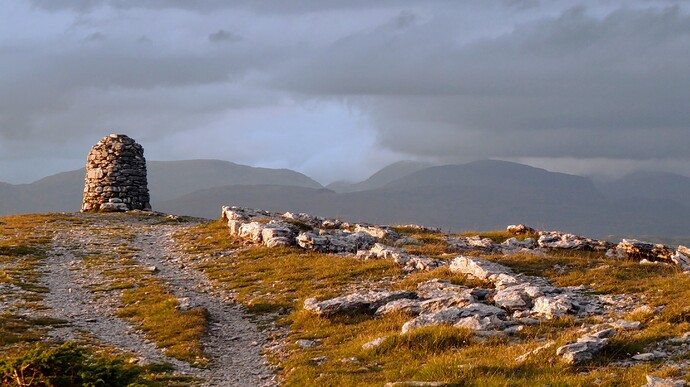 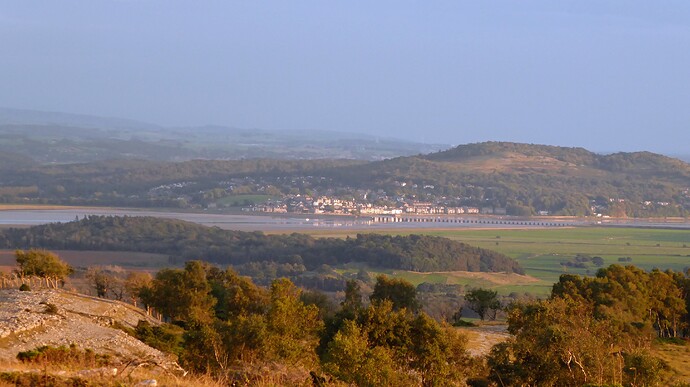 Just… astonishing Mark. You must be deservedly chuffed.

Thanks John. Now just watch me fail to qualify the next summit

Amazing great results, Mark!
Congratulations!
Thanks for your call for our S2S.
73,

Forgetting the radio, this is a wonderful place to spend a few hours. The sunset didn’t disappoint

So true. And so often you get the summit to yourself. Think I’ve already sung its praises on another topic about activators’ favourite SOTA summits. Fine view from my upstairs bedroom of it 7km away across the Kent estuary tempting me back again.

Re your final photo Mark, nice view of Arnside village with Arnside Knott G/LD-058, the smallest Marilyn in England behind it, only 10 minutes drive away for [almost] daily dog walks. But yet to activate it in 2021.

Wow, well done Mark thats just amazing. I knew the bands were in good shape on Sunday morning when I switched the radio on at Greyrigg Forest and the first station I heard was a 59 JA on 17m (couldn’t get through the pile-up), but thats a fantastic haul. Wish I hadn’t been driving home during the afternoon!

Very well done Mark! You must have been

a) stoked
b) knackered

That sounds like a great day out there. Wow

What a great achievement and truly inspirational! I reckon you will be awarding all the prizes to yourself - hi hi!

I meant to ask in the pub Mark, how long does those LiFePo4 batteries last when using the 857 on high power?

how long does those LiFePo4 batteries last when using the 857 on high power?

Subjectively when activating I’d say about an hour.