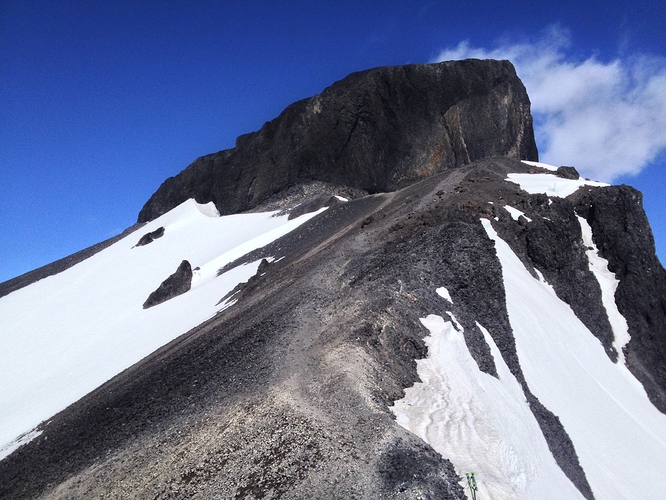 Last week, while visiting family in Vancouver, I decided to take a three day trip up the highway to Garibaldi Park and do a bit of ski-mountaineering. There is good camping at Garibaldi Lake, only 9 km in and 850m up from the parking lot. There are also several SOTA qualified summits in the area so I brought my radio, hoping to bag a few first activations in the region at the same time. Despite the distance from major VHF centers, I was able to make four QSOs on the 2m band from both of the summits I climbed. I also brought my HF rig with me, however things did not go quite as planned on the lower bands. 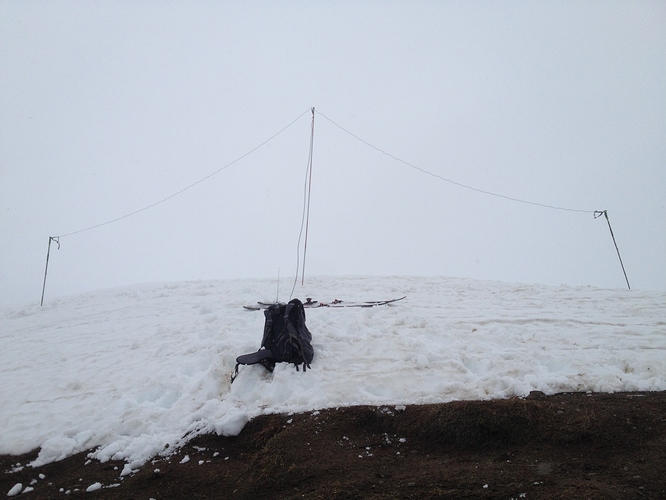 My current HF setup is an FT-817 with a 20m dipole and T1 tuner from Elecraft. On my first objective,
Panorama Peak (VE7/SL-021) I set up the dipole using my avalanche probe and poles to keep it above the snow. I’ve heard that HF propagates through snow, so I could effectively lay it out without the poles and still consider it to be ‘off the ground.’ However, I had the equipment, so I set it up. Coordinating with some local operators in Squamish and Saltspring Island using VHF, we attempted a QSO on 20m SSB. While I could hear both stations quite well I was unreadable by both parties. All the readings from my FT-817 and the T1 tuner were good, low SWR and full power out, but the chasers were hearing only a faint signal. We switched to 80m SSB and had the same result. I reconfigured my antenna as a ¼ wave vertical with a single radial pointed towards the chasers, but this did not improve my signal. 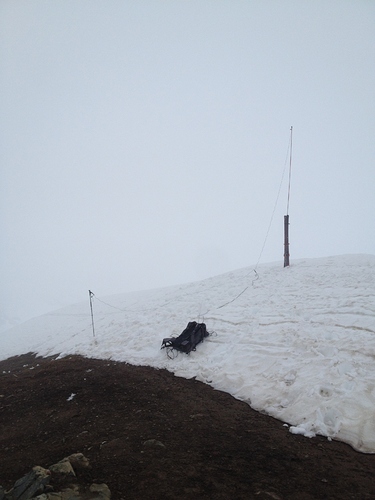 I’m not entirely sure what happened there, but it’s obvious I’ll have to do some more fiddling to get to the point that I can reliably activate summits on HF. It might be the antenna, the band conditions, or even the radio. Results were so bad from the first experiment that I opted to leave the HF gear in my tent the next day when I climbed the Black Tusk, a technical summit a bit further north. 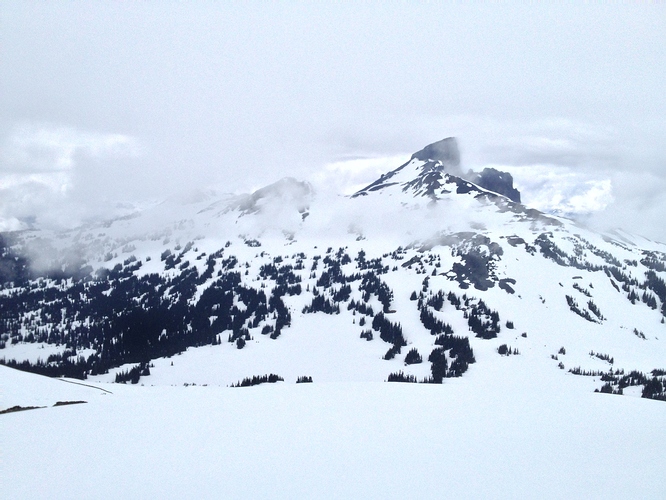 Fortunately I was able to get enough action on 2m from Black Tusk to call it a successful expedition and I headed back to camp to pack up and hike out on the same day, a 15 hour finish to a three day adventure.

For a full trip report (and more pictures) click here: Summits and Radios

Huh. For some reason it hadn’t occurred to me that you could use an avalanche probe to hold up an antenna. Nice idea. I can see it not working well for a vertical, by the way… a carbon or aluminium shaft would interfere.

John,maybe check the settings in the menus on your 817, it happened to me once with my 857 wich is alsmost identical. I don’t remeber exactly but i think it was something in relation to the processeo level ? the meter was idicating audio going out when in fact it was not…

Congratulations on you hike to this summit ! Beautiful.

Hi John,
Unless those local stations were line of sight “direct contacts” you may simply have been too close for the skip distance to them and your HF station may have been working fine to stations further away. The fact that you could hear them, but they couldn’t hear you could be the power difference plus antenna coming into the picture. Your 2.5 or 5w from the low dipole would have been firing near vertically up to the ionesphere where the higher powered stations with beams may indeed have been emitting some ground hugging signals in your direction.

Did you spot to SOTAWatch? This is almost a mandatory action when running QRP on HF nowadays and will normally get chasers at different distances looking for you.

So don’t give up on your HF station yet, there’s every chance that it’s working fine.

Thanks for the feedback, folks. To answer a few specifics, both the power meters on the FT-817 and T1 tuner were showing 2.5-5 W of power out when running on internal batteries, so I’m pretty sure I’m getting the most that this little QRP rig can give. I didn’t spot on this particular summit, mostly because there was no cell coverage. I do have a satellite messenger (SPOT) that I use to check in and in case I need help, though I haven’t tried to configure it for SMS spotting on SOTA. This could be something to try in the future. The stations I was trying to contact were pretty much line of sight, we were also coordinating on 2 meters.

I’m going to take the whole thing back out to a local park and try to get some more information on this, I’ll let you know how it goes.

Quick update on my HF troubles. I went out with a couple of other VE7 Regional Managers (Ralph VE7OM and Eric VA7NX) and we did a bit of troubleshooting from Sumas Mountain (VE7/FV-026.) The radio itself appears to be operating on frequency and at full power, and Ralph VE7OM was able to use the same antenna to make several CW contacts with his KX1. At this point we suspect that it may be a combination of my low speaking voice (I rarely bellow) and the dynamic MH-31 microphone that comes with the FT-817. My next step will be to upgrade to an electret mic, probably a Vertex MH-67. This may all become moot, however, as I’ve developed a serious crush on the new Elecraft KX2 and may end up selling the FT-817 to take the edge off the Canada/US exchange rate.