A couple of weeks ago I tried out my homebrew rig on Rombalds Moor (G/NP-028). Today I tried it out again on Cracoe Fell (G/NP-032) along with a new antenna. Another success I’m pleased to say, although I’d like to apologise to Phil G4OBK for taking about 5 attempts to send his name. I could blame the key or keyer but I think we all know it’s my incompetence. Actually, there’s no point blaming the keyer since I wrote the software for that.

I’d made a slight modification to the transceiver. A few times I’ve heard what I assume are broadcast stations breaking through so I bypassed the preamplifier. It’s not really needed as there is plenty of audio gain. Today I didn’t suffer the same problem.

The new antenna was a vertical EFHW for 20m. It has a loading coil near the centre so it fits on my 6m mast. It uses the same transformer and 2m counterpoise as my regular EFHW. I made it as it takes up less space than the regular EFHW - it could be useful on some summits or in other portable locations. I can see it being handy on a campsite. The main thing is it worked nicely with 7 contacts. I then set up the regular sloping wire and worked 11 on 40m followed by another 3 on 20m. At the end there were a few stations that called me but I struggled to get their callsigns. A QRZ? didn’t elicit much response so perhaps they were calling someone else or were struggling to hear me.

The photos are on the way up - it’s about another half hour to the obelisk at the summit. 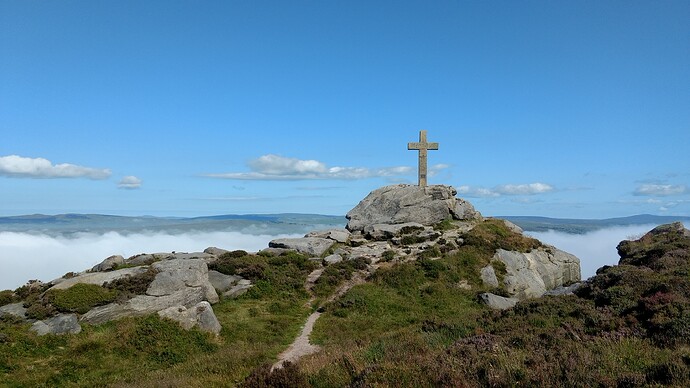 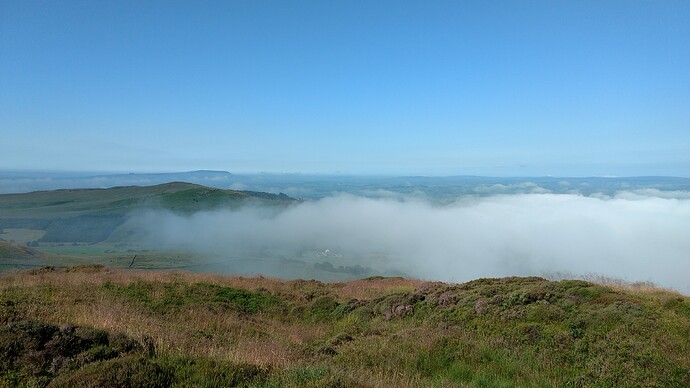 Phil G4OBK for taking about 5 attempts to send his name.

Definately not incompetence Richard - it happens a lot. I think running the H and I after each other followed by the L is likely to result in an error. I think it must have happened on three QSOs out of the 11 on SOTA CW today! Well done on the homebrew rig, good note and easy to copy, albeit the short skip was right for us today across the county. Rylestone Cross looking as good as the Rylstone WI ladies did in Calendar Girls hihi!

Thanks for the S2S today. Nice pictures. You had much better weather then we had in DL.

Yes there is always more chance of inter G contacts on 40m in the spring / summer seasons than autumn / wintertime.