SOTA during geomagnetic storm caused by the sun

Today 15 August I began my activation of W0C/FR-026 on a beautiful, dry, alpine, sunny morning at 3700M. It was 1547 UT, and the only clue that anything was strange was that 30M sounded very quiet as I adjusted my tuner. I found a perfect match for my EFHW and started calling CQ at 10.113, per my Alert.

I called for over 10 minutes and never got a call. My antenna was near the summit, on a 6M pole, and just down the ridge on the east side. I was running 5W of CW from the same ATS 3B rig I’ve used for years.

I tuned up on 21.063 and started calling CQ at 1557 UT. After several minutes of dead silence, I tuned around and heard only a few very weak signals down the band. I called for a few more minutes with no replies. This was highly irregular! Sometimes I get callers from Europe right out of the start.

I went back to 10.113 and called CQ for a few more minutes - same quiet band, and no calls. Usually the chasers are beating each other up to get me…but not this time.

I gave up, changed the link in the antenna, and started calling CQ on 18.0925. In a couple of minutes NE4TN was calling, and then I got a couple more - K2XT in NJ was very strong - he could copy me OK - what was going on?

There were only three callers on 17M, so I finally played my trump card and tuned up on 14.063 CW. In two minutes I was spotted, and then the calls started piling in - but the QSB was awful, some of chasers obviously couldn’t hear me, and the reports were down from normal. At 12150 feet, in the thin air, it seemed so incredibly unfair - I had hiked up from 9100 feet, and both the weather and the site were essentially perfect!

When I got home later, I checked the solar conditions at the NOAA Space Weather Prediction Center - there it was - a major geomagnetic storm was in progress - it was triggered by an erupting filament, which created at CME a couple of days ago.

Wonder if any you chasers and activators noticed anything odd today? Wow, I sure did! I never even got spotted by the Reverse Beacon Network on either 15M or 30M, despite many minutes of calling CQ! Usually I get a page of spots for that! I was lucky to get spotted on 17M and 20M - but the numbers were lousy! Clearly there was much more absorption than usual today.

The other half of the problem is that the 10 cm solar flux has fallen to a very low value of 89, much lower than what we have been enjoying for many months. This lowers the MUF, so no wonder 15M was useless, and 17M was marginal.

Thanks to all my chasers who copied through the QSB, and apologies to a couple who dropped out before we could complete the exchange.

Surely I am not the only one who noticed these miserable ionospheric conditions!

Bit luck of the draw when up the summits.
Yet yesterday I had some quite strong Scottish stations riding in on 20m and also Northern island also. Not often heard on 20m down here in SW of the UK.
Riding in on what I suspect some sort of Es.
The Irish one I wanted went Qrt for 5 minutes was loud to start with and then afterwards just slipped back into the noise.
When contacted a north coast Scottish station I asked for my needle back for he was nigh on bending it, he did laugh when I told him.

At end of day we are still at mercy of the conditions of the upper layers of our atmosphere.

Wonder if any you chasers and activators noticed anything odd today?

Hi George!
Yes, conditions were extremely poor on Saturday August 15. I attempted to make some QSOs in the Russian RDA Contest. 10m was completely dead, I worked one solitary RA6 station on 15m. 20m was only just open … stations workable but very, very weak. In the late evening, 40m and 80m opened up marginally … again very weak signals indeed. Altogether I worked 100 Russian stations in the contest, and I think the strongest signal I heard was S6.

I heard no North American stations on any band, but a few Brazilian (PY) signals were coming through on 40m at around 22:00 UTC…

Glad to see your report, as I was beginning to wonder if there was something wrong with my antenna and/or receiver! Sorry your SOTA expedition was so disappointing. There will be much better days!

yes, frustrating weekend with the storm. Wish this instead wud happen during the week while I’m at work.
Sounds like u made the most of it though. Congrats on the effort and results, despite the poor condx.
73 de Jack W4TJE

George…bad band conditions yesterday and today, the 16th. I worked 28 stations yesterday but it took three hours to work them, and 7 QSO’s were on 2m FM.

Today I worked only 20 stations over 3 hours on the summit…so even slower today.

Only worked one JA on 15M through the afternoon. Listened for beacons and could only get the ZL beacon.

10M was completely dead. Later in the afternoon worked a interstate op on 40M with much QSB.

Glad I was not on a summit.

P.S just saw a comment on another forum that another geomag’ storm is predicted for the 18th.

[quote=“VK2AOH, post:6, topic:11417”]another geomag’ storm is predicted for the 18th.[/quote]…and the effects of last Saturday’s one still seem to be lingering this morning. Oh well…

I didn’t experience such lack of chasers.
In fact, I’m happy with the number of QSOs I got in my 2 activations yesterday.
Working conditions were FT-817 @ 5 or 2,5 watts (I switched up and down to save battery) and mobile whip antenna with one wire radial. 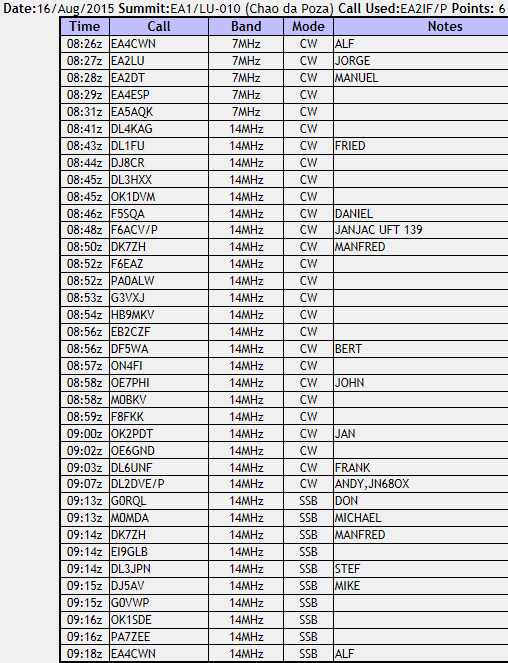 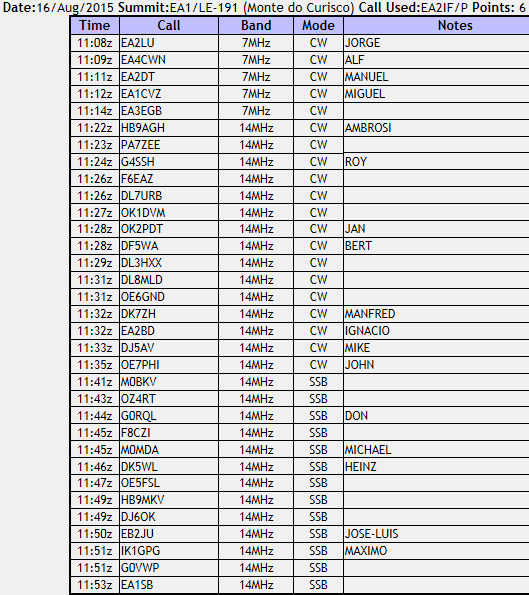 …and the effects of last Saturday’s one still seem to be lingering this morning. Oh well…

According to “Spaceweather” the solar wind following the CME has a south pointing magnetic field which is sustaining unsettled conditions.

well despite the over all conditions over weekend

Had some lovely LOTA contacts on 20m saturday from down here on SW coast from LOTA,s in Northern Scottish coast and many WAB squares gained and bag few IOTAs also thanks to the lighthouse weekend.
Even EU-122 only 300 miles from here was riding in very strong on 20m sat

I wonder how much geomagnetic latitude differences make to the severity of the extended effect? Obviously the solar activity has led to some increase in auroral activity, though it doesn’t seem to have pushed the auroral oval out from the pole that much, but it seems to be quite strong over Canada and northern USA.

Wonder if any you chasers and activators noticed anything odd today? Wow, I sure did! I never even got spotted by the Reverse Beacon Network on either 15M or 30M, despite many minutes of calling CQ! Usually I get a page of spots for that! I was lucky to get spotted on 17M and 20M - but the numbers were lousy! Clearly there was much more absorption than usual today.

Surely I am not the only one who noticed these miserable ionospheric conditions!

You make some excellent points.

On Saturday, I was QRV on G/SP-013 Gun at 0635z, where I had a sked with John VK6NU, who was activating VK6/SW-042. John and myself are no strangers to making s2s contacts and so I felt reasonably confident, we would make the trip. Oh how wrong I was!

After 35 minutes of calling, I finally secured my first contact of the morning with SV2FLM. Conditions were extremely difficult on the 20m band. Some VK’s were eventually logged, however, their signals were way, way down on what I would normaly expect and no s2s with John was made.

Working from a SOTA summit with my Antron-99, there’s very little that surprises me, but I was taken aback when out of nowhere, Geoff, signing HC8/G8OFQ on the Galapagos Island of Isabella, came back to my CQ with an absolute armchair copy, on the same band that I couldn’t buy a contact an hour earlier… 'Tis a funny old hobby ham radio. Even when band conditions are rubbish, how something suddenly comes along and changes everything.

I can relate to this post given how tough today’s activation was. Thankfully 20m saved my bacon but the QSB was fierce. I’ll post more on this later.

I think this is the second time I’ve had a SOTA holiday with some kind of flare or CME. I ended up using just 40m and 60m today but it was struggle at times. Hopefully things will be more settled tomorrow.

p.s. for anyone who has never been to Somerset, do visit. It’s very pretty, the 2 summits I’ve done today are easy but ever so beautiful. They may not be Munros but I’ve enjoyed them as much as I would do a big walk in GM.

Andy M0FMF
(down in Somerset)

Working from a SOTA summit with my Antron-99, there’s very little that surprises me, but I was taken aback when out of nowhere, Geoff, signing HC8/G8OFQ on the Galapagos Island of Isabella, came back to my CQ

Sorry, missed this - are you sure about the call Mike? HC8 is a rare one indeed even from home on SSB. I had a near miss (dx-expedition circa 2010 or 11) - did not get my call correctly and then I got kicked into the gutter by big stations. So never worked those islands and I guess it might be a first from a SOTA activation??

Well done Mike indeed - well the only part left is was it a first on a SOTA activation!?

I have managed to work him on 3 bands, well pleased