SOTA at a football stadium? A tale of four ‘First Time’ activations in I/LZ

Compared to others I’m relatively new to Amateur Radio and during lockdown, I went from Zero to M Zero in just over five months. One thing that really spurned me on to go for the Full ticket was the thought of lockdown ending and being able to operate abroad and finally get my opportunity to combine my passion for visiting hill top towns in Italy with operating /P. After not being on a plane for two years, I’m finally in a car heading for the airport and bound for Rome!
For these sorts of trips I would normally travel hand luggage only, so, I printed off extra copies of my licence/HAREC docs and added them to my ‘lite’ go-bag for radio which, for this trip, consisted of:

At the airport security, I placed the 817 into a tray and watched it go through the x-ray machine and then slide over into the additional scrutiny lane. As it was being swabbed down I was asked what it was (nb: just in case, I had set it to BBC R4 and had the whip close to hand too). Shortly after, it was given the all clear and I was relieved that it all went much easier than expected!
Six hours later I arrived at my final destination, a hill top town (+450m ASL) located between Rome and Naples with a backdrop consisting of the snow capped Abruzzo mountains rising to about +1200m to the north. 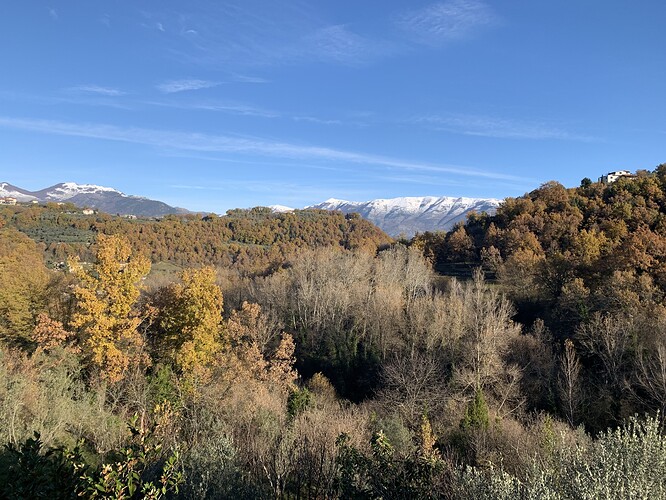 Before hitting the sack, I pondered over my plan to visit some un-activated summits in the Lazio region. Due to my other daily commitments, I knew that I wouldn’t get the time to reach any of the higher summits. I checked the weather forecast once again and was glad to see that it would be sunny and around 12C during the next five days. My (self imposed) constraints were that each summit had to be less than a 30min drive away as I only had a 3hr max window each day after lunch for any activation. As they had not been activated before, there were no previous reports to assist me with parking, ease of access, mobile signal etc so I was relying on the accuracy of SOTA Maps and the OS Maps app on my mobile. I decided on one summit per day and selected four of them. First on my list was I/LZ-124 followed by I/LZ-161, I/LZ-170 and I/LZ-178.

After a 20min drive, the public road petered out and I parked up at the verge at a wide entrance to two properties which appeared abandoned. 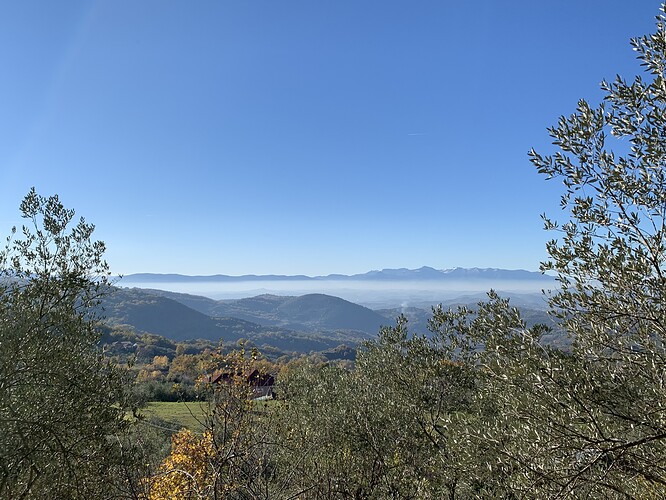 I headed up further by foot into the dense woodland and had no further views out. There were no footpaths and it proved a bit disorientating. On reaching what I believed to be the edge of the activation zone it was still very dense woodland so I ended up spanning the EFHW along tree branches at about 2m AGL. This was less than an ideal set up as the EFHW had only been made a few days before my flight and had been tested as a sloper.

Luckily, I had left the wire foldback long and a quick check with Nano VNA indicated that I needed to adjust it by about a foot. Adjustment made, I called CQ on 20m SSB and struggled for a while as I hadn’t set an alert. Plus, on just 4w, it proved difficult to be heard when replying to others calling CQ so I chose a frequency and tried to stick to it. 75mins later, I had logged only four QSOs with CT1DIZ 53, DJ2ST S0, DL2HWI 44, F4WBN 59. 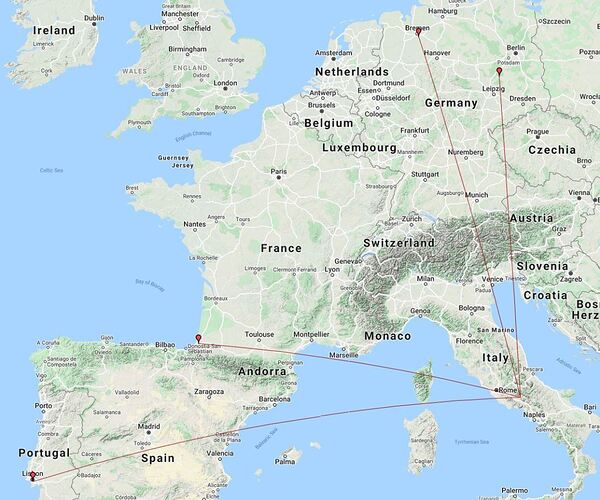 On the drive home, and despite the tough initiation to I/LZ, I was able to admire the views of the hills and the deep red sunset and wondered whether the other summits would be just as tricky to pull off. Nearing home, I stopped off at the local bar and downing a cold Moretti beer certainly helped me to decide to soldier on.

After a 30min drive, I was winding up a series of tight hairpin bends leading up to ‘Il Castello Svevo’ (The Swabian Castle !). The view along the route was, once again, stunning. In the distance, was the Superstrada that leads to Monte Cassino (which is definitely worth a visit if you are ever in the area). 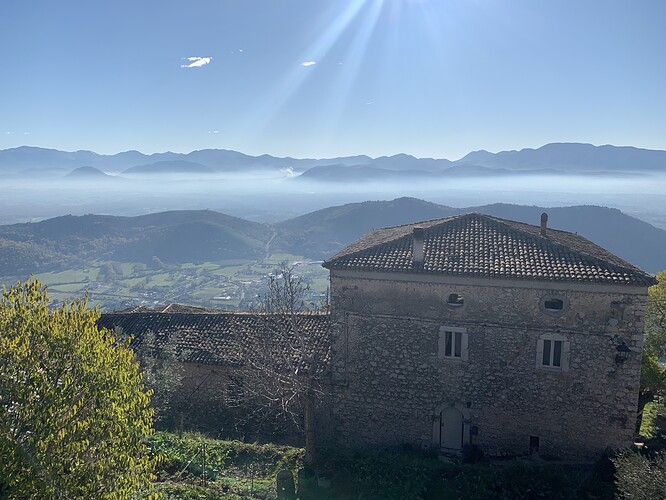 On reaching the summit, the road ends with a last hairpin bend with a very wide run off area that sort of forms a sloping piazza. This is where I parked and a little footpath hugs the side of the castle as you go further up by foot. 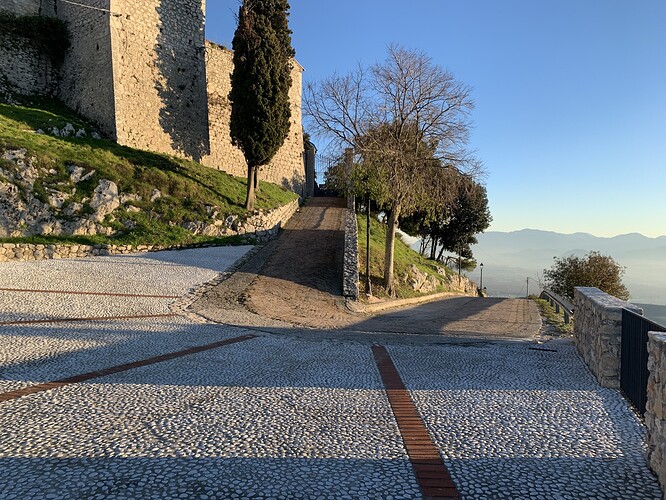 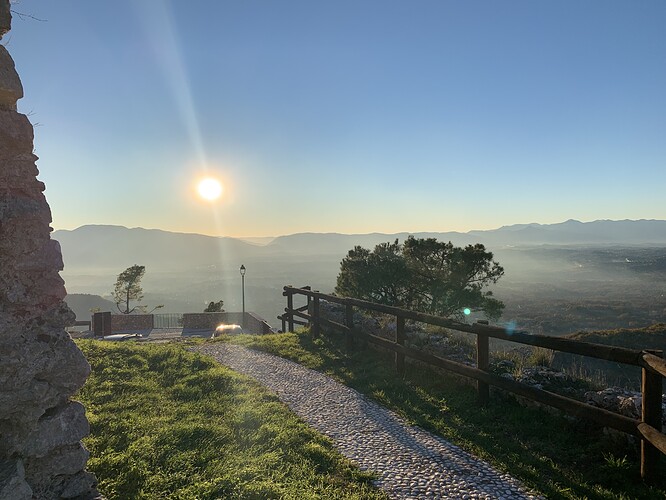 This area didn’t seem suitable for setting up as the castle would block my signal on one side so I decided to go back down and set up along the wall of the piazza below. 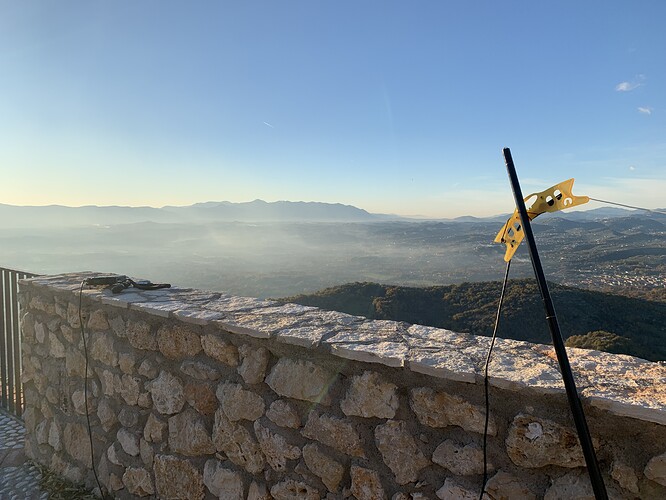 This time I did alert/spot myself and what a difference it made. First off the bat was a s2s with GW0WPO/P located at GW/NW-043 giving me a 57. 15mins and nine QSOs later, I was happy and ready to call it a day but hearing AC1Z in New Hampshire answer my call really surprised me as I was only on 4w ! The QSB was fluctuating quickly and it was a tough QSO but we persevered with me hearing him 54 and him giving me a 33. There followed a second flurry and I worked fourteen QSOs in total, As I’ve never really worked the UK on 20m, I was surprised to work home eight times inc. G4OIG 55 (thanks Gerald !) and M0VAZ/M completing his 998th SOTA chase (well done John !)

Today’s drive was also 30mins away and on nearing the summit I thought this would be a waste of time seeing as it was full of masts! 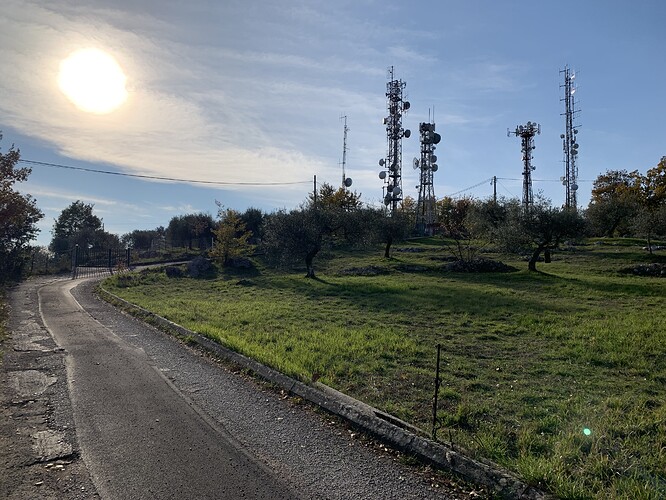 The summit itself appeared to not have any open public areas and I reluctantly parked adjacent to the entrance gates to the compound for the masts. Opposite was a builder’s storage yard and it was locked up and deserted so I started a walk around to find a spot to set up at. 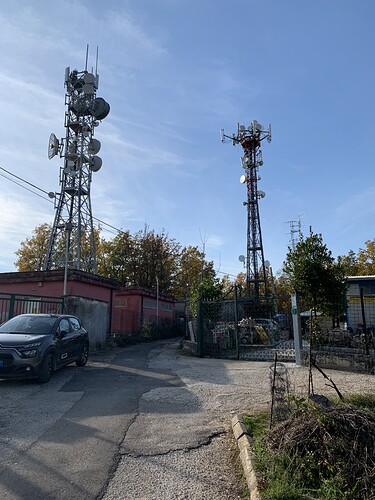 Some the masts were rusting away and one had received a new outer structure. Another had ‘died’ altogether. 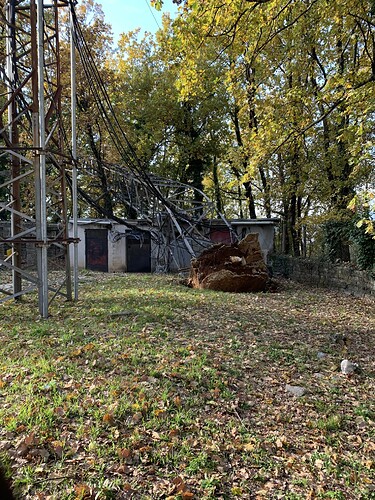 After a 5-10min search through some boggy bits of track, I found a clearing in a nearby field but couldn’t work out if it was private land or not. I attached the telescopic to a tree and tied off the wire. Once again, the antenna was flat and not high off the ground. After a quick check with the Nano VNA, I made a few adjustments and sat behind a wall and spotted myself. 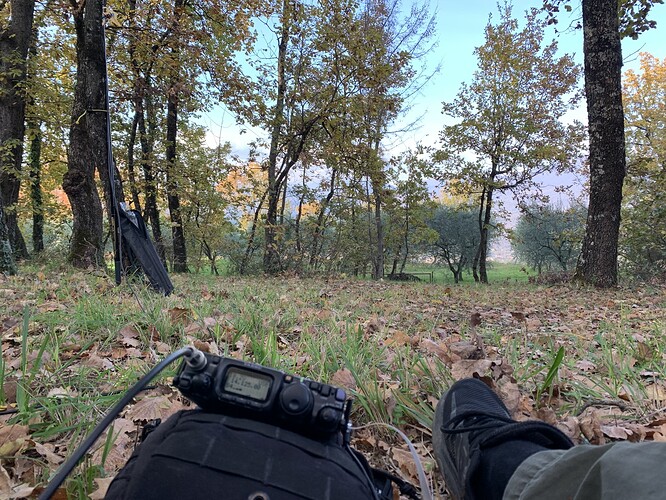 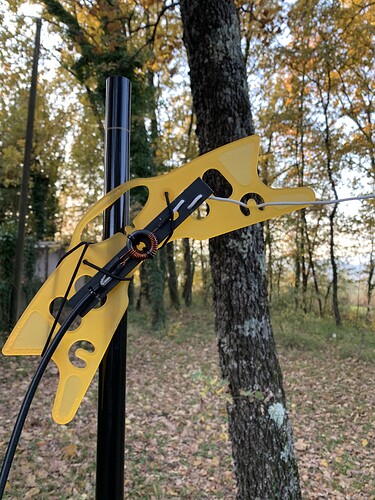 After what seemed like a slow start, I bagged six QSOs in 15mins and only made another two over the next 25mins. I never really felt at ease at this location as I prefer to work with over ear noise cancelling headphones on and couldn’t see/hear if anyone was walking around me so I was happy to pack up when done and get back to the car. 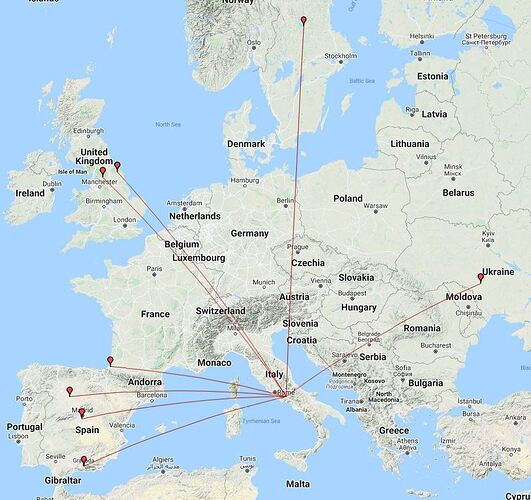 (…… two beers on the way home this time)

Today’s drive was only 21mins and as I neared it, the summit looked like it might be a beautiful hill top town judging by it’s skyline 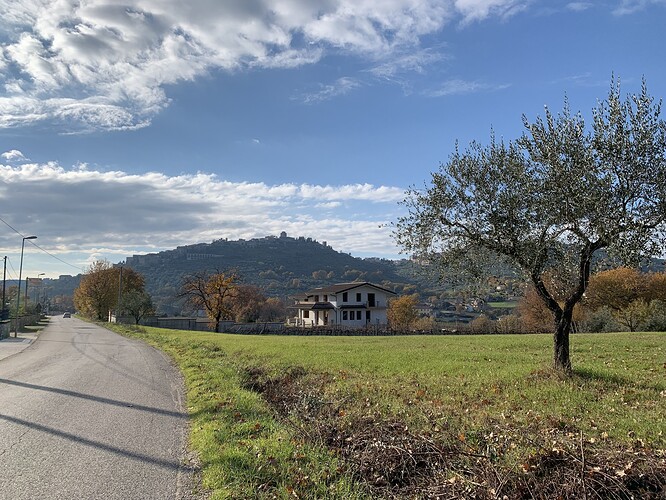 The activation zone turned out to be in an urban area with the summit being shared between a walled garden and a rather secure football stadium located behind it. 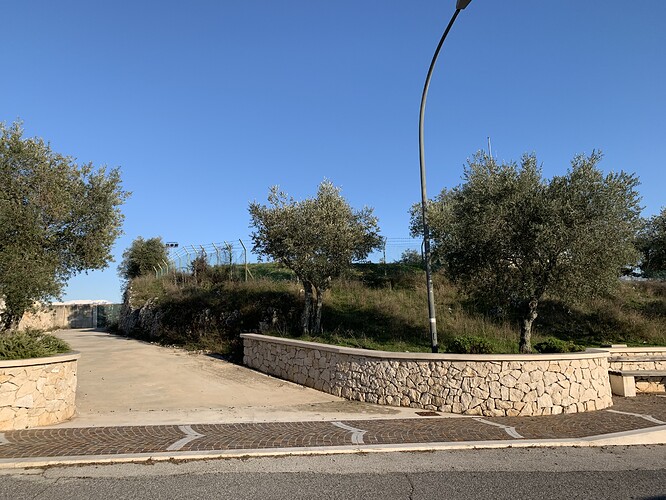 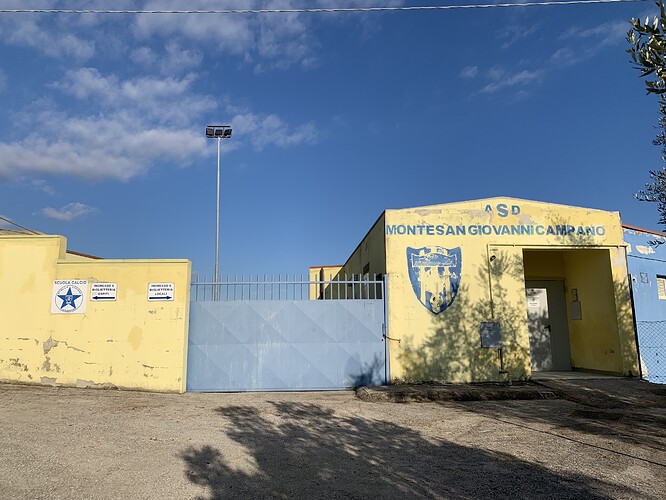 A short distance from the summit was a restaurant, with a large gated closed car park and beyond that was an olive grove accessed via a beaten track. It was out of sight from the road and did appear private but I hadn’t opened or climbed over any gates. A redundant metal fence post provided a support for the telescopic pole and the wire was soon tied off to an olive tree. After a quick check with the Nano VNA, I made the necessary adjustments and spotted myself. 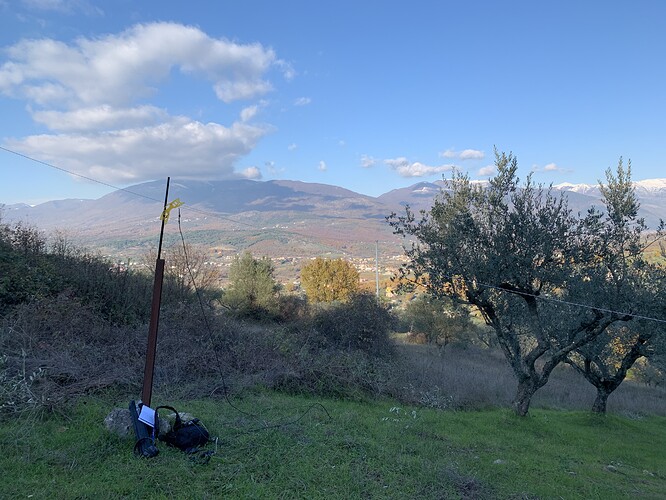 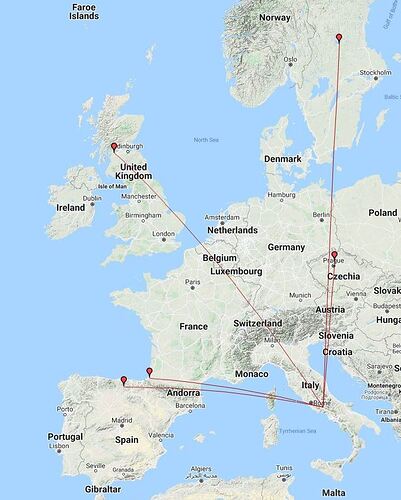 All in all, I had achieved my agenda without any real difficulty but one thing I did learn was that I shouldn’t try and rigidly stick to one antenna set up as each summit presented different conditions and having to hand the tools to assess and adjust it proved paramount on this trip.

A big thanks to all the chasers especially CT1DIZ, OK2PDT, F4WBN & SA4BLM who seemed to be looking out for me and worked me a number of times each.

At Rome airport, the security guard was equally inquisitive and swabbed down the 817. I was able to answer his questions in Italian which seemed to put him at ease. Aboard the plane, I started to think about the next trip.

An escape from the December gray to a beautiful area in Mediterranean sun with
4 first activations.

Exactly - I could imagine something like that for myself.

Thanks for a fabulous report and photos. Looks like a great adventure. I’m sure a lot of us will have read that report with envy! Glad you didn’t have any problems with airport security - always nervous moments! Where next?

…… and many thanks for your message.

After a two year ‘travel suspension’ it was great to get out and play radio in Italy. The food and wine was pretty good too!

Thanks for your message. Yes, it was a ‘nervous’ first time for taking a transceiver through airport security. Oddly enough though, the most trouble I’ve ever had was getting a Sony ICF-SW55 into Indonesia!

Many thanks for an excellent report and brillaint photos Lea. I was really pleased to work you on the second one. Unfortunately family duties intervened on the other days. I very much appreciate your careful consideration of the best operating position on these kinds of summits. I was very cautious when I activated a number of summits in southern Portugal not knowing what was public and what was private At least you could speak the local language had you been challenged. My limited Portuguese would not have got me very far!

Yes, it was a surprise to hear you on air (after the many exchanges of msgs on here) and hearing your callsign caught me off guard a bit as I did recognize it. I hope you are getting on okay with the Portuguese lessons (?). When i am over there, speaking some Italian certainly helps but it normally draws the same reaction, i.e. they can work out I am Italian but cannot place the accent and the region I am from, so, I simply reply Londra which helps break the ice especially with the authorities. Fingers crossed I can get to go out again around Easter time.