I am a fairly new ham, I got my tech license in 1997 and then upgraded to general and then extra in 2014. I did not operate on HF really until 2015 and I did not have much experience. This all happened while solar cycle 24 was winding down. I have never really known what happens at the peak of a solar cycle. I live in central CA and during the doldrums of the solar minimum I have managed to work and confirm 299 entities. I like working DX and hope one day to make DXCC Honor Roll.

As for activating, that started on 5/21/2017, It has been a slow process. I don’t get out as much as I would like but I have 233 points and would like to make Mountain Goat but we shall see. I guess I need to get serious about that.

So enough about me.

The reason I started this post. Yesterday I worked Javier, EA2GM/P, on EA1/AT-208, this was my first EU SOTA summit as a chaser. When I saw the spot, I thought yeah sure I will tune there and I will hear nothing as usual. When I got there and the beam made it slow turn, I started hearing something. I thought it was other stations working him. NO, IT WAS HIM! I reach for the paddles and sent my call, HE CAME BACK TO ME! I was in shock, he sent my report and he faded and I sent his report. I think I heard him send 73 but that was it. I sat in my chair thinking did that just happen? I had to know so I emailed him to confirm. Sure enough he confirmed I had worked him!!

I guess I am really excited about this solar cycle 25!! If you have been around a while this may be old hat but I am really happy about this!!

What is your experience? I know SOTA has not been around that long but I would like to know.

I have never really known what happens at the peak of a solar cycle.

Hi, Kent. I think that your results reflect a current uptick in day to day solar activity. The thing to look out for is the Solar Flux Index, SFI, which you can get daily from the home page of QRZ.com or spaceweather.com. During the minimum last year the SFI went down to 68 or even lower to 66), a few days ago it went up to 77 and is now down to 74 or 73 as a couple of active areas have rotated out of sight. When the sunspot cycle starts to accelerate the SFI will climb quite quickly, as it approaches 100 the DX possibilities will open out considerably on the higher bands, 15/12/10 metres, and if it gets up to 120 then F-layer DX may be available on 6 metres. On the other hand, DX opportunities on 80 metres will not be as frequent. The lower bands need few sunspots, the higher bands need plenty. The downside of sunspot maximum is the occasional major storm from powerful geoeffective flares, which can virtually shut down the bands for a few days. I had the misfortune to activate during one of those, I barely scraped four contacts and it took four bands to do it!

The next twelve months will tell us whether we will have a strong or a weak maximum, even in a weak one there will be times of high solar activity, for my part I will start every day by looking at the SFI as keenly as I look at the local weather forecast - exciting times!

Solar Cycle 25 is starting up but don’t expect too much too soon.

It’s going to be a bumpy ride.

By that I mean there will be periods that are bad between the improving propagation periods.

One positive point though, working on the HF bands during a solar minimum will have honed your listening skills and will have had you make the best of your antenna and rig(s). Things will get more and more exciting and enjoyable over the next few years.

For the new hams who join the hobby at a solar peak, their impressions on conditions will be different. They will become disappointed as we go down into the next dip.

I suspect with the current increasing ham radio population world-wide we may get problems with at least the HF bands being too full when the conditions are good!

Don’t worry, only the FT8 frequencies will be busy…

What is your experience?

Being called by a VE2 and VK5 at the same time when running 5W CW on 12m. At first I thought (due to my rubbish CW) it was 4? station in Israel, then I realised it was V? and send V? kn and getting 2 stations calling was difficult to separate. Finally I realised the very loud station was a a VE2 and after working him I called V? kn and the loud VK5 came back. Random QSOs on an activation, not an event with pre-arranged skeds or when lots of people were primed to be on the air.

Or (again on 12m but 10m is the same) calling CQ SOTA on SSB QRP and not being able to resolve the calls of all the W7 and W6 stations replying.

Then there’s the delight of 10/12 being busy even if not super DX and then 15m and 17m and 20m just being full to overflowing. And 40m goes nice and short skip and you can work all your UK chasers trivially.

But overall, the bands are just busy and that puts a smile on your face.

What a great QSO! Thanks for calling. This is the magic that radio gives us. 5w and a vertical antenna with two slightly elevated radials can do great things. Let’s hope that solar cycle 25 is conducive to our interests and makes it possible to make good DX in 10m !!

Hi Kent,
I heard you today on HB/TI-144 with a strong 5/8 while you talked with GM4JXP/P but dared to ask you for 5kHz up and did a S2S instead.
While I did several east-coast QSO when portable with 5W SSB during the minimum, even a S2S, but you were the first that I heard so strong from California.
Well done!

Sorry I missed you! Next time for sure!

You made my morning!

Thanks for the QSO!

I got licensed only a year-and-a-half ago. So, my expectations whenever I go out for SOTA are pretty much nil

I only managed to collect points on my fourth try, and that was just barely enough contacts.

Going in to the hobby I had no idea I was getting in at the bottom of a solar cycle, or even what that might mean. Consequently my expectations are quite low, but it will be a delight to experience generally nothing but improvement for a while. It also gives me time to improve my MC so when propagation does improve I’ll be better prepared to handle contacts of varying speeds.

Hi Kelly,
If you can find an experienced SOTA activator near you, team up for a couple of activations and he/she can show you that even at the bottom of the Solar Cycle good contacts are still possible. It needs a bit of luck, but mainly it’s about being on the right band at the right time and being able to spot to SOTAWatch from the summit, Then of course there’s the VHF and UHF bands that are not affected by the Solar Cycle (but by a lot of other factors).

I can understand your experience very well. A week ago I was active on DM/BW-105 in the late morning.
Suddenly I got a call from W2NR. I had not expected that at this time of day… but the call from ZL1TM 10 minutes later, I thought at first it was fake.

HF goes its own way.

I have similar recent experience. When I activated Wheeler Peak W7N/WM-001 on September 20, 2020 at 22:10 UTC - the first station that answered my CQ on 20 m was HB9BHU. I was very surprised and impressed!

Great idea. I’m not really that concerned with earning the points as much as I am just having fun making a few contacts. However, do I need to be able to spot from the summit? I thought that’s what the alerts tab on sotawatch.org.uk was for? To be able to do it ahead of time?

Alerts, ahead of time and spots when you are there. I can assure you it makes a BIG difference spotting yourself when you are set-up on a summit.

Spotting is easiest using one of the many free Android spotting Apps, If you have an iPhone there is the purchasable SOTA Goat App - or for both platforms, you can use a browser to go to Sotawatch or to Sotl.As.

If you have a “feature Phone” i.e. not a SmartPhone, then spotting via SMS is also supported.

Of course in all of these options you need cell network coverage, failing that there is also a way to spot using a HT and APRS.

The advantage of the spotting apps is that they also show you when there are other activators on summits, so you have a chance of calling them to get a Summit-to-Summit (S2S) contact, which not only counts to the needed 4 contacts to qualify the summit (which can be with anyone not on the summit) but you also get chaser and S2S award points from a Summit to Summit contact.

If you have a “feature Phone” i.e. not a SmartPhone, then spotting via SMS is also supported.

You can do this from a smartphone too

That fits to my surprise when I was able to work the chaser 4S4DX the last time I activated DM/NS-125.

Yes, conditions are getting better. I dont know what kind of antennas and power are using the chasers from US but in my last activations their signals were booming!
This is the result of my last activation from JA/HG-227 on 14mhz 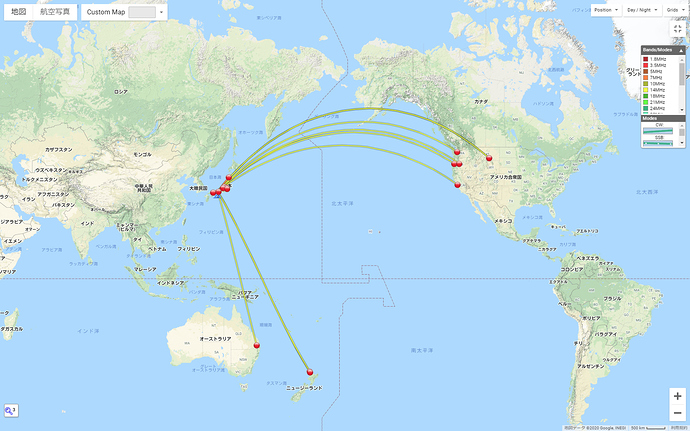