Following on from my recent Red Screes activation I decided to hit the other side of the pass which is Raven Crag then follow the wall up to Stony Cove Pike. With snow above around 400m this made for a great photographic opportunity so I took along my new Panasonic TZ70. Recently I had to decide between a fancy phone with a decent camera or a cheap phone with a separate camera. I chose the latter - I bought a Cubot X19 Android phone - currently listed at just under £95 on Amazon. For that you also get a clear case and a screen protector! It is basic, some of the heavier-weight apps struggle and the camera is pretty rubbish, even so it functions surprisingly well - no problems with SOTA Spotter for example!

The Panasonic TZ70 is a pocket sized camera with an impressive zoom and image stabilization. All the zoom photos taken today were handheld, and somewhat shaky at that! 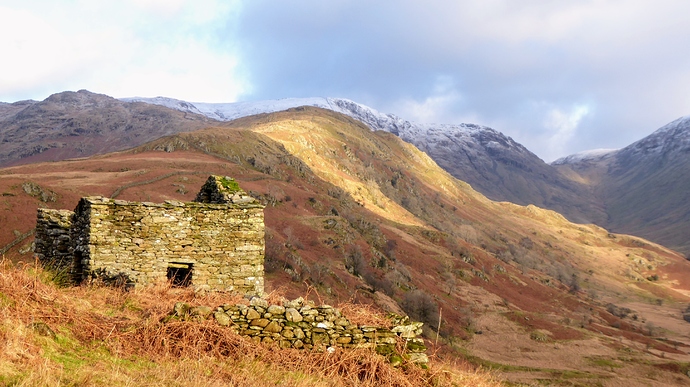 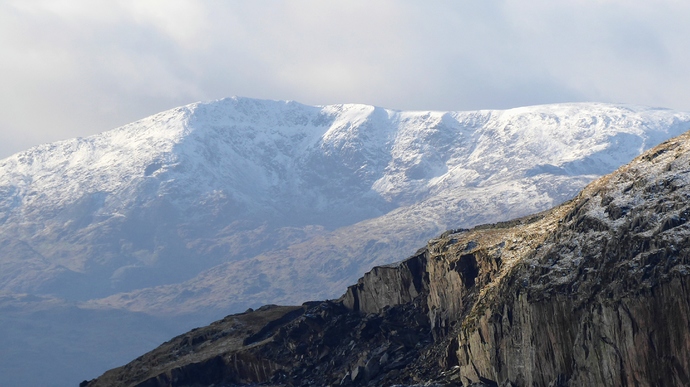 To give an idea of the zoom possible, this is Red Screes ‘full wide’ (aka pretty much what you’d get with a cheap phone camera) 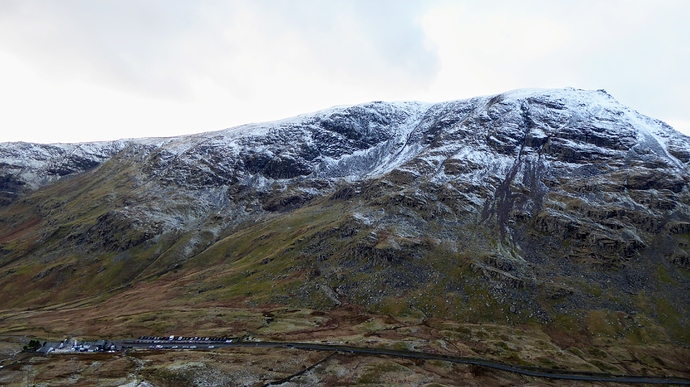 … and then full zoom: 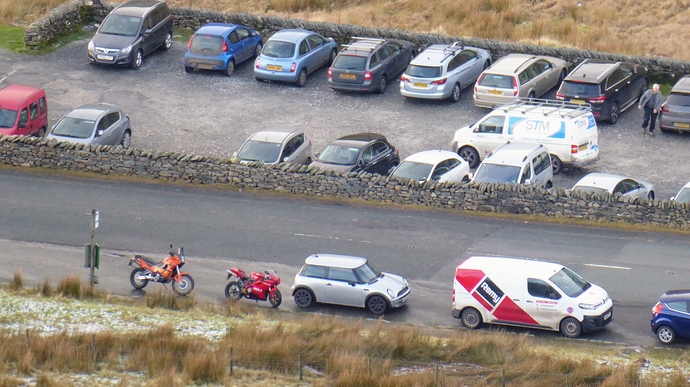 The zoom allowed me to capture some folk on other summits: 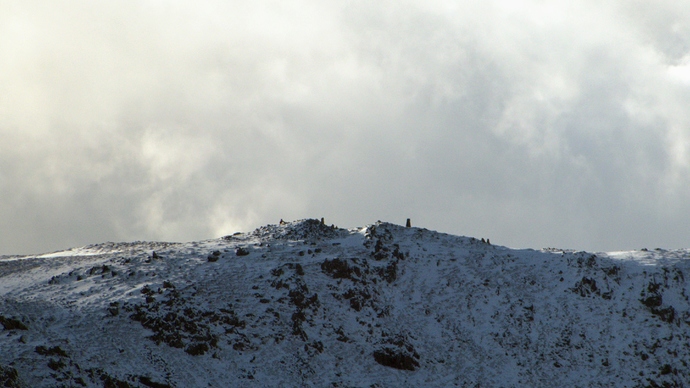 Fairfield Summit Shelters and walkers on the horseshoe 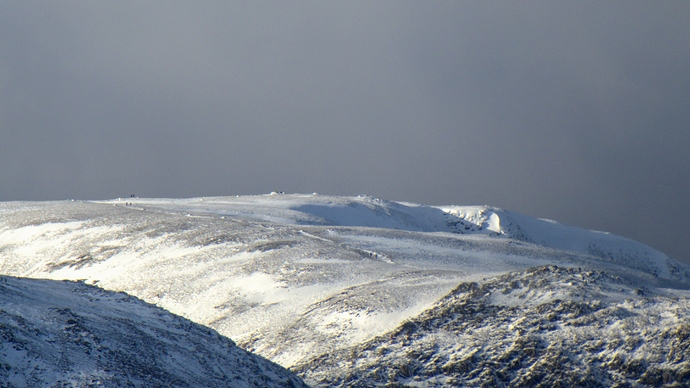 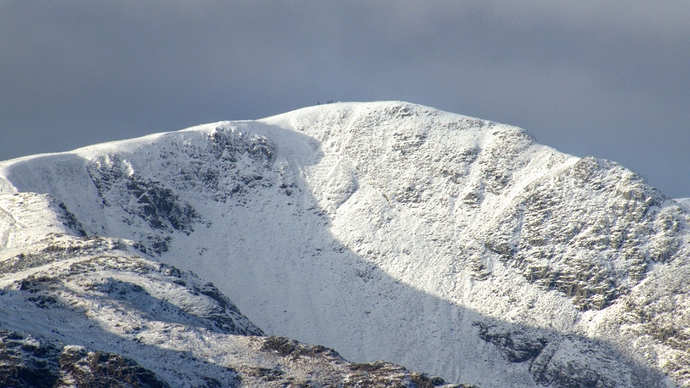 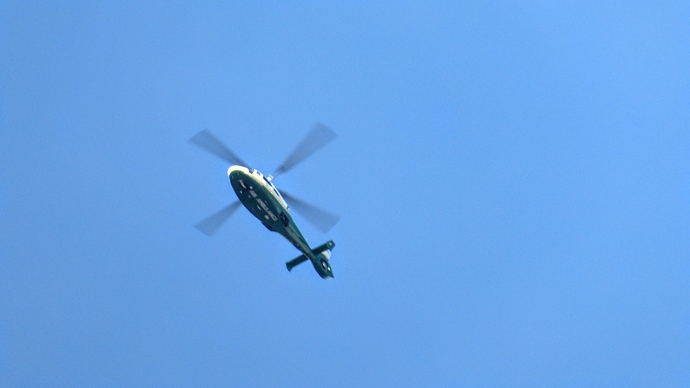 Anyway, back to radio! I’d taken the FT1XD and caught @MW0XRT Dave activating Cyrn-y-Brain on the way up - luckily he worked a steady stream of 2m FM callers for the last 10 minutes of my ascent allowing me to grab a S2S just after arriving. 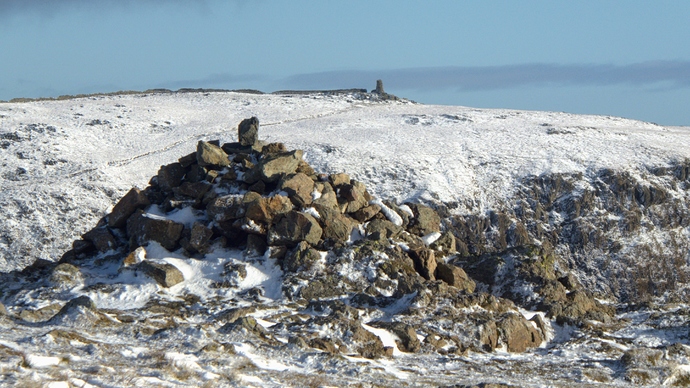 I then switched to the FT-817ND, noting that his signal came up quite significantly on this rig - probably down to the longer antenna. Six calls logged on 2m FM, and me forgetting 2m SSB this time round! So I took some more photos and moved to behind a short wall to get out of the biting wind, I think it was around -3 degC on the summit with a gusting 20 knot wind. 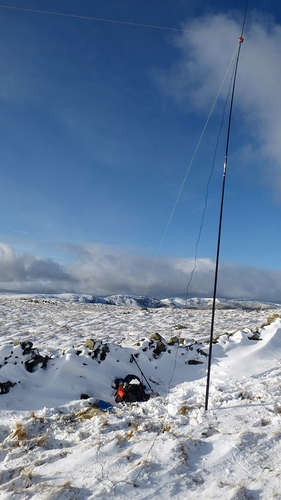 As the SOTABeams QuadBander was clipped for 80m I started on that band and worked five stations, still using the FT-817 @ 5w. My spots were a little erratic as the phone signal was poor, but clearly my 40m spot worked as chasers had dropped on the frequency and were calling before I had stopped messing with my phone. The messing was compounded by me not wanting it to freeze - I’ve had that several times now, battery can drop from 90% to nothing in a matter of minutes, so I was careful to put the phone back into an inside pocket.

Fourteen contacts on 40m. I dropped back to 80m to work @G4WSB Bill who was booming in and sounding great from Craig y Llyn.
I wasn’t expecting much from 20m so was grateful for the four contacts I got. 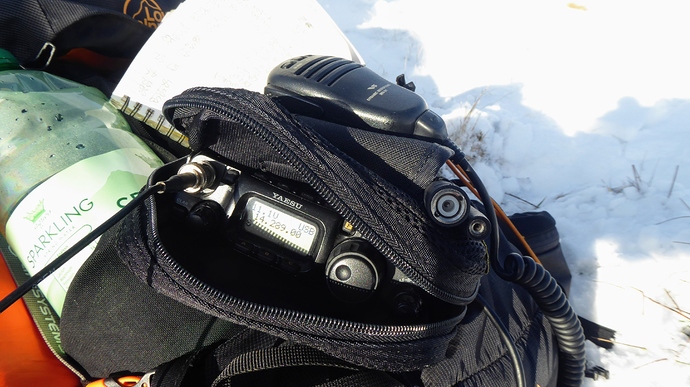 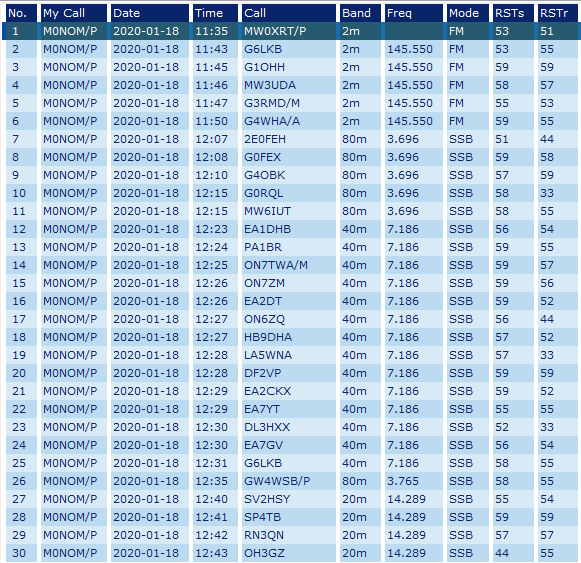 After the radio I had a coffee using the Jet Boil to warm my hands up. Whilst re-clipping the antenna I had lost my footing and managed to pretty much face plant in the snow! There were a few passers by but none brave enough to come ask me what I was up to. Must look pretty odd to some folk!

Following the stone wall back to Raven Crag 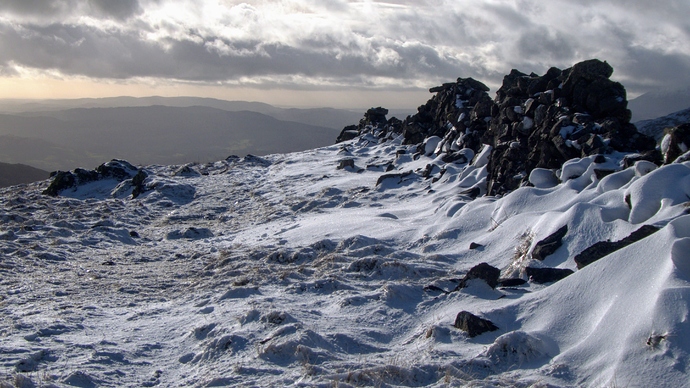 Lake Windermere snaking into the distance 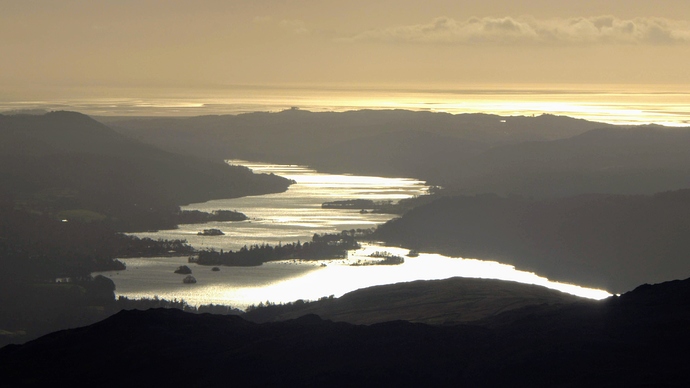 Last time I was on Stony Cove Pike was the height of summer for an evening wild camp, this was a welcome contrast. Thank you to all the chasers! Mark.

I used to use a TZ20 and now have a TZ100. Best compact cameras I have used, software works very well as does the Leica designed optics.

Six calls logged on 2m FM, and me forgetting 2m SSB this time round

After seeing your alert I took my Ft817 with me on my regular dog walk around and up Arnside Knott (G/LD-058) and was monitoring 145.500 whilst walking. However, when my RSS-feed-WOTA-spot-auto-emailer told me that you were QRV on 2m FM, I was still at the base of the hill. I could heard your chasers but not you. By the time I got to the summit, you had already moved onto HF.

Not a total loss though, I have an excellent 3-way SSB QSO with David @G6LKB and Chris @2E0MOW in a sunny sheltered spot at the summit with the Ft817 with RH-770 just sitting on the bench beside me. Good reports with just 5W SSB V-pol.

So looking forward to repeating that with you S2S sometime.

I hate it when that happens! I would have returned to 2m after the HF activation, but in the meantime I’d somehow managed to lose both pencils that I’d taken with me, and by that point anything more complicated would have been a struggle.

I will be out tomorrow, probably North Pennines, with Nigel M5TUE who will complement my FM/SSB activation with CW. Hopefully we will give people decent notice, once everything is arranged.

Excellent report Mark. I could detect your presence on 80m, but the noise at my end was too great. Nothing on 40m other than those working you of course due to the long skip.

I was amused to see that you took similar photos to those I took in 2010. This operating position might look familiar. Maybe a few stones may have moved. . 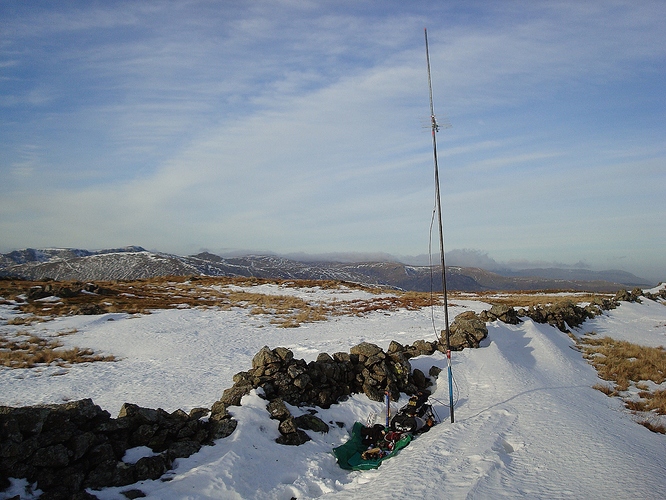 Wow, that is scary! Clearly great minds think alike. Mind, there is an extra pencil up there now - maybe a future activator will be able to make use of it. I did try and find it, but snow is a great hiding place. Also noted that the little stand for the Jet Boil has two uses - one for stability and one to stop the propane tank firmly sticking itself to the ground.

Will Nigel use CW on HF or 2m? The latter would be a rarity I would hate to miss. If HF, 60m would be great if possible,

Well, I will have the FT-817 with me, so anything is possible!
He has suggested 2m CW to encourage me to learn with QSOs between our QTH’s.

I’ll make sure we do both 2m SSB and 2m CW tomorrow Andy.

Lovely pix. TZ series have all been desirable. I never bought one but that is one model series I noticed and they were on my list for some time… then bought a Pentax zoom compact with 18x zoom, has taken lots of nice pix. Still see the TZ series in the camera shops occasionally and take a look at them.
Andrew VK1DA/VK2UH

…CW on HF or 2m? The latter would be a rarity

I always have the key connected on 2m SSB activations. I used to get quite a few in the log (G3RMD, G3WPF, G0TDM, etc), but exponents are rarely on nowadays. Hope the activity today produces results. Will be QRV on 70cm SSB/CW tomorrow.

It did, thanks. Very happy with my first SOTA activation on 2m-SSB and 2m-CW. After blowing the dust off my neglected Ft817, I worked a few 2m-FM stations (including a S2S) to check my setup was okay then 5 SSB stations in 25 minutes (all V-pol) including S2S with Mark @M0NOM and Nigel @M5TUE on The Calf (G/LD-013) and then Nigel again on 2m-CW. Earlier, I heard a GW4 station calling CQ CW but he had gone before I got the paddles plugged in.

I listened from home when I saw the spots but didn’t hear @G8CPZ or @M5TUE. (not too surprised, as LD and NP are quite a distance from me)

I have a white stick vertical, which is normally connected to an FM-only dual band mobile rig. So, a quick scramble to disconnect, and reconnect the old FT290. I have an 817, but that lives in the rucksack normally, and would have taken longer to set up.

I did hear an SSB rag-chewing QSO, so there was some activity!

I like the idea of encouraging CW / SSB with whatever equipment is to hand, and hope to listen out for Gerald and Paul in G/WB on monday…

not too surprised, as LD and NP are quite a distance from me

165km from Arnside Knott to Shrewsbury and it’s not line of sight. Yeah, I’d say that’s pushing it with 5W without a directional antenna.

I wouldn’t mind taking my 2m Yagi up some summits in the right weather and I will be for the LD SOTA weekend in June along with a 23cm Yagi, tripod, and HF gear. But it’s going to warm to hot then (that’s a promise) where as it was zero degrees at my summit today.

Thanks for listening, you never know. As it happens the weather turned from sunny to fog/mist pretty soon after we arrived at the summit making it really quite unpleasant. I held the Sandpiper Delta Quad whilst Nigel worked 2m CW and SSB with his 2.5 watt rig. I’ll do a full write up as soon as I get a chance - suffice to say it was quite an adventure.

Well done today on both your QSOs with Nigel and your SSB activity. Nigel also got John @G0TDM in the log so he can still be persuaded under the right conditions to pick up a key for 2m @G4OIG Gerald!

Thanks Mark, and well done to you and Nigel too.

I know it’s the weekend and there are more stations on-air than when I normally activate weekdays but even so I was surprised and delighted by the number of 2m-SSB chasers calling me and you two over half an hour or so, more than enough to qualify the activation on 2m-SSB alone.

In these wintry conditions (especially at my age) I can’t afford to spend a lot of time erecting and packing up antennas so it was good to do FM, SSB and CW all with the J-pole.

I look forward to my next multi-mode 2m activation, contacts with more 2m-SSB chasers and our next S2S on SSB or even CW.