This year, Sotamaps is offering something to while away a lazy hour or three over the holiday period: the Sotamaps Christmas Prize Crossword Puzzle, which is open to all SOTA registrants(*). The puzzle clues will be made live on December 24th 00:00z - just refresh the page after that time to pull the live clues. In the meantime, puzzlers can play with the page with random clues.

Prizes are offered for the first three (3) correct entries drawn after the close of the competition, which is January 6 2019 23:59z.

The puzzle is of the cryptic type - in other words, the clues don’t just point to a simple substitution of one word for another, but require the user to analyze a clue to find hints as to how he/she might arrive at the solution to the clue.

The puzzle is available in an interactive form in the https://mapping.sota.org.uk/xword page. 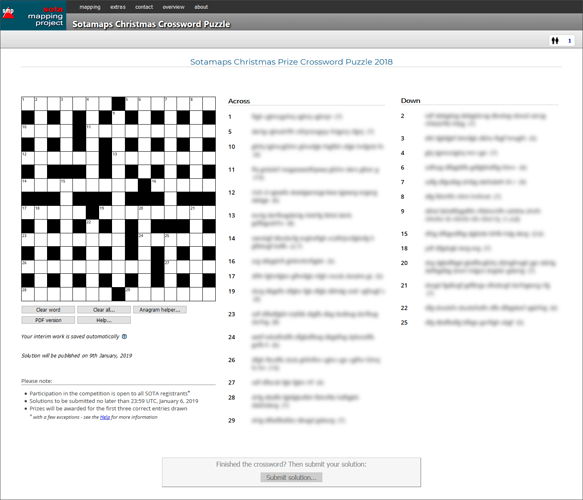 Users can also download a PDF version to print out and fill in with pen or pencil. A short guide to the puzzle, with links to online tips, can be read by clicking the “Help…” button.

When (if!) you have completed the puzzle, you can upload it to the server by using the “Submit solution…” button. You may upload your solution as many times as you wish, over-writing any previous solution you may have uploaded.

(*) with a few exceptions - please consult the crossword Help window for more details.

Great stuff Rob. Thank you for providing this year’s Christmas puzzle. I look forward to having a crack at it myself tomorrow.

Well, actually, I was looking forward to one of your own puzzles also this year - I always find them fiendishly difficult, so worth a few hours of brain-wracking!

Some years I have an idea for a Christmas puzzle, and some I don’t. They have never been annual, just when I have thought of something. This is not one of those years so I imagine the SOTA community will be very appreciative of your crossword.

I acknowledge your “No MT or families of…” rule, which is fair enough with there being prizes involved - but I’ll still be having a go at the crossword “just for fun”.

acknowledge your “No MT or families of…” rule, which is fair enough with there being prizes involved

It’s actually more to do with the fact that the solution is available on the SMP server, which is maintained, and paid for, by the SOTA MT. So, the possibility of members of the MT gaining access to the solution is, no matter how slight, something to be guarded against. Point?

Just so long as the puzzle is available to MT even if the prizes aren’t!

Just so long as the puzzle is available to MT

Sad that we won’t have one of yours this year, Tom.

Just a quick heads up that the PDF version still has the “random” clues.

OK, fixed. Thanks for the heads-up!

OK - To all those who have attempted this crossword, I now have to come clean, hang my head in shame, and admit that one of the clues is wrong!

I’ve only just discovered this a few minutes ago: the offending clue is 24 across, which now has the correct clue (F5 update the page).

Apologies all round to those who have been scratching their heads wondering how the previous version of this clue could result in letters gained from other clues.

Again, sorry for the confusion. We are all amateurs, after all, some more so than others!!!

I’ve extended the puzzle close date by one day to allow users more time to complete the puzzle.

So, the period for entries to the crossword competition to be submitted has come to an end. It turns out that only two people have submitted entries and only one of those - from a MT member - was correct. So, no prizes will be awarded.

I had thought last year, if an interactive puzzle were to be put together and which offered prizes, that people would display more interest than they appeared to have done last year when Andrew VK3ARR offered a crossword puzzle to the SOTA community. It’s plain to me now, though, that such puzzles are not popular in the community, and that I should have spared myself the effort. Lesson learned.

For those very few who may still have at least a passing interest in this, here’s the the solution: 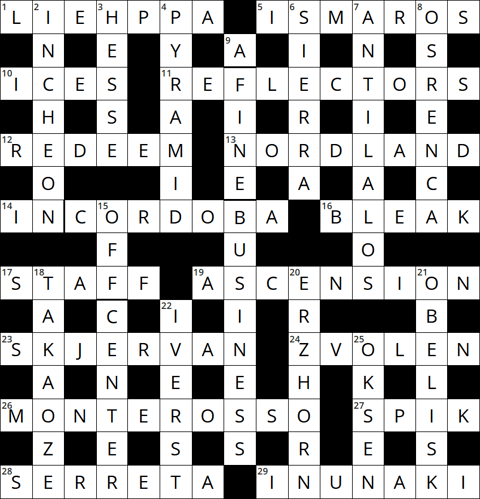 the full solution with explanations can be viewed in the https://mapping.sota.org.uk/xword page by clicking on the “Show solution…” button.

I tried but couldn’t finish it!!

Hi Esther, nice to hear that you tried it - do take a look at the full set of solutions with explanations if you get time.

It turns out that only two people have submitted entries

I did not expect you to receive a vast number of entries, but 2 does seem very disappointing after all the effort you must have put in. Unfortunately the cryptic crossword is an almost uniquely English language phenomenon, and deeply embedded in British culture in particular. By choosing this genre, you disadvantage from the outset those for whom English is a second language.

Since I entered, I infer that I was the only non-MT entrant. It appears that I got one letter wrong, which is annoying.

One of the requirements of a cryptic crossword is that the answers should be unambiguous, or at least, if a clue has more than one possible answer, the check letters must resolve the matter. For example, for 15 down I initially came up with the answer “off centre”, that being the correct spelling for my variant of English. That put me off 28 across for a while, and it was only after solving that one that I realised that there was an alternative spelling. But without that check letter, either answer would be equally correct.

My mistake was with 27 across, “Peak almost comes to a sharp point”. I am not sure how I managed to miss the summit name “Špik”; clearly the diacritical thwarted a simple search but I thought I’d accounted for that. It’s obviously the right answer in the context of a SOTA crossword. But not all of the answers were SOTA names, and it could have been an ordinary English word, and s?i? gives plenty to choose from. English is rich in four letter words.

My first thought was “spin”, the “peak almost” being a reference to W7A/PN-084 and pin being the sharp point. But I wasn’t really happy with that because it leaves the “s” unexplained.

After I’d corrected 24 across for the revised clue Rob kindly dropped me a hint that my answer still wasn’t quite right. I knew it had to be 27 across. Unfortunately I was still focussed on searching for ordinary words, and I came up with “spit”. The “peak almost” I took to refer to a truncation of the German word “Spitze” (which occurs in several summit names) and “comes to a sharp point” referring to the usage of spit as a promontory of land which comes to a point, or possibly a roasting spit. Too cryptic? Perhaps, but I think is is a plausible answer, and in the absence of a check letter it is hard to rule it out.

Nevertheless, I enjoyed mostly solving the puzzle. In contrast to some earlier Christmas quizzes, I liked being able to work on it in my own time without it being a race to be first with the answer, which always seemed a bit unfair at a time of year when there are many distractions.

the cryptic crossword is an almost uniquely English language phenomenon, and deeply embedded in British culture in particular. By choosing this genre, you disadvantage from the outset those for whom English is a second language.

Yes, I was well aware of this from the start, but I just wanted to do it

It appears that I got one letter wrong, which is annoying.

I’ve been in that position myself on many occasion…

However, as I’ve indicated above, this is the last time I post such a puzzle.

For example, for 15 down I initially came up with the answer “off centre”, that being the correct spelling for my variant of English. That put me off 28 across for a while, and it was only after solving that one that I realised that there was an alternative spelling

I had the same issue with off-centre. The Spik one for me was quick - I had Spike, minus the point (Spik), then spent a while looking for a summit that matched. Google helped

The rest of that bottom corner had me stumped for a bit, before a few summits clicked and the rest fell in place. 24 across had only one solution that matched - I just assumed I had completely missed some peculiarly British cryptic clue form within the clue. The fact the clue was wrong explained a bit - but I’ll still assume that it’s my stupidity first.

However, as I’ve indicated above, this is the last time I post such a puzzle.

It was a good puzzle, and by Christmas you might have forgotten the pain. My suggestion is making it a bit easier

I’ll try to be a bit more organised this year and get another puzzle out, but perhaps not a crossword.

I spent a bunch of time with summitslist.csv and grep getting some of these

That was the hardest part to populate with words!

Hats off to anyone who constructs cryptic puzzles and total awe from me for those who solve them.

My cryptic skills are si. No diacritical accents required. Not a summit name.

[edit: I see the software has made my 4 letter patten into two due to having two asterisks. Oh well, that makes it a better puzzle.]