All my ham life I was trying to find a way to have small antennas in small places in London so I was looking for a small vertical that I can mount on a disused Sky bracket.

I found this Sigma Eurocom SE-HF-360. Any pointers/ideas? The only thing I used so far are endfed wires with 9:1 ununs (both at home and portable) on fishing poles. Also I only use a KX3 (with the ATU inside).

The antenna you are looking at is much like your wire and 9:1 unun. It is a 5:1 balun with 23 feet or so radiator. Somewhat of a rigid mechanical version of what you are not using. Depending on how sturdy your existing pole is, best way to make it fit in may be to attach a wind sock to the top. In terms of performance, I do not think you would find it any better than what you are using now.

yes I dont believe it will be better but it will safer to leave erected without taking the pole down every time. No I only take it up when Im using it.
no?

Have I understood correctly - you are looking for a vertical antenna which you will put up and take down as you need to use it?

I presume in that case that the sky dish bracket is on the side of your balcony - not on the roof of the building?

How much access do you have to the sky bracket? What I would suggest is considering something far shorter in the form of a loaded mobile whip and the one I am thinking of is from the Spanish KomunicaPower company - the HF-Pro2. In the UK it’s supplied by Lamco in Barnsley. 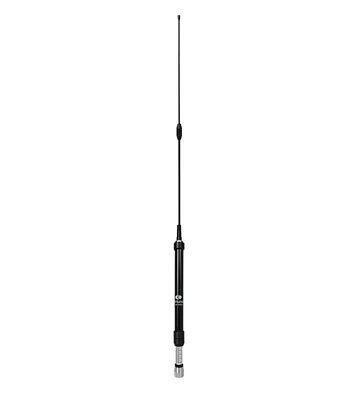 Take a look at this as an option. You tune the band you want to use it on by sliding the housing of the loading coil up or down as needed. It works well on 40m through 10 metres - I’ve never tried mine on 6 metres. You don’t need an ATU with this but you have it in the KX-3 anyway.

I use one of these if I am going to a summit with limited space or that I know is very busy. I built my own tripod and radials but I know Komunica are about to come out with something similar that could be of interest if you need it. Otherwise, you need to modify that SKY dish bracket to take an SO239 mount and coax and then string a few wires off it to act as a ground-plane as this antenna is really designed to be operated from a parked car or camper van with a mag mount on a metal roof. Perhaps a CB-wing mirror SO239 mount could clamp onto the SKY mount? Ask the guys at Lamco.

Okay, if you desire, you can use your fishing pole permanently, the trick to keep it from collapsing is rubber strips and hose clamps. Above each joint, place the rubber strip around the pole and secure with a hose clamp. Do not tighten the clamp beyond making it and the rubber snug against the pole - too much tightening can crush the pole. Top sections too thin to accept a hose clamp could have all weather tape secured above the joint to a thickness larger than the pole section below it. This is what is recommended by Spyder Pole and what I have used that totally solved my issue of the pole collapsing. And you can still put a windsock on the top to divert attention from the real use.

Thanks for the fishing trick!

Let me correct something DD5LP, at the moment I dont like that my fishing pole is only up when operating.

With a stable vertical I can put it on the roof (where the sky sat was).
Ill check what you linked

Hi Tasos,
OK thanks for the clarification. If you are looking for a permanent “Install, set and forget”, tune via ATU only, vertical antenna then the HF-PRO2 will not be suitable and the SE-X80 or SE-HF-360 are probably better options. It’s a choice of clamped aluminium tubes with the X80 and a fibreglass screw-together solution with the HF-360. I would not call either of those “small” antennas however.

Maybe one of the small Tarheel 2, ATAS 120, etc. type of antennas? You would need to run a control cable and have a control device (manual or automatic) in the shack, but it’s small and you’d have multiple bands without having to change the antenna element. Maybe lay out a couple of thin (as in almost invisible) wire radials for each band. It might even look like part of your satellite system once mounted. Good luck.

These are a bit more expensive. Id like to keep the cost low. But nice choices!

Sigma are an importer/reseller that supply both ham radio and CB stuff. The SE-X-80 was originally designed and produced by the Snowdonia Radio Company from Wales (hence it used to be called SRC-X80). When they closed down another company took over the antenna building and now Sigma appear to market that antenna. The X80 was designed as a ham radio 80m-6m vertical antenna but really it’s a random length radiator attached to the top of an UNUN, so you need an ATU to be able to use it. When the bands are good it works fine but don’t expect miracles from it.

Your reference to a CB vertical antenna being used on the amateur bands may come from the Antron A-99 which is often used on 10, 15 & 20m by some SOTA activators althought it was originally designed as a 27MHz (or 27-30MHz) antenna.

Whether making your own using the 5.6m of ali tubing is an option - yes if you want to build an antenna - it definitely is - just avoid the element being at a resonant 1/4 or 1/2 wavelength length on any band you want to use Obviously you need to design and produce some insulated mount for the final antenna.

You can answer that yourself.

sorry both I didnt provide a link!

It seems the same with the Alu Sigma but with an attached UNUN.
So I dont need to source all the material.

(both allowing -4% for end effect)

@G4MD , I could probably get this one and change one of the segments to a longer one?
What would be the next good length?

Why do you need to buy some overpriced antenna? Run a wire up the inside of a fibreglass fishing pole. Extend pole and fix sections extended with gaffer tape / Gorilla tape / rubber and jubilee clips (never a drip with a jubilee clip), mount unun in waterproof box, connect wire to unun and feeder to unun.

Or I’m missing something.

It seems the same with the Alu Sigma but with an attached UNUN.
So I dont need to source all the material.

I think you meant to say “without” an attached UNUN ? - at least I can’t see one on the antenna. So yes this looks like a copy of the X-80 without the UNUN - for a reduced price. With the required mounting bracket.

If we ignore the fact that “Thunderpole” is a CB radio site, they seem to have a nice selection of antenna mounts and the like for some reasonable prices.

Hi Andy, from what I understand, what you describe is pretty well what Tasos is doing at the moment with his fishing pole and was looking for alternatives.

Indeed I actually have all the ingredients to make this. one thing Im not sure is how the fishing pole will work on bad weather + if UV has weakened the fibreglass over time.